“Bitcoin [BTC]‘s bottom is close” has been the order of the day since the king coin traded at a price of $15,800. However, that opinion might not be as valid as many investors might have hoped.

This was because of a recent revelation by a CryptoQuant analyst, MrPapi, who claimed that according to market signals, the bear market might take longer to dissipate. While referring to the last bear market, the analyst said,

“In previous bear markets it took BTC around 11 months (330 days) to find a floor, once RSI bottomed. We are around 270 days currently. 330 days will land in Jan ’23, but given the macro I would expect a longer bear market than in the past.”

According to the four-hour chart, the Exponential Moving Average (EMA) seemed to contrast with the projection. At press time, the 200 EMA (yellow), which indicated the long-term expectation, was positioned above the 50 EMA (blue). This meant that it was likely for BTC to recover within the period. So, there was less possibility that there would be havoc in the market.

However, the analyst might have focused on a higher timeframe than the 200-day period. 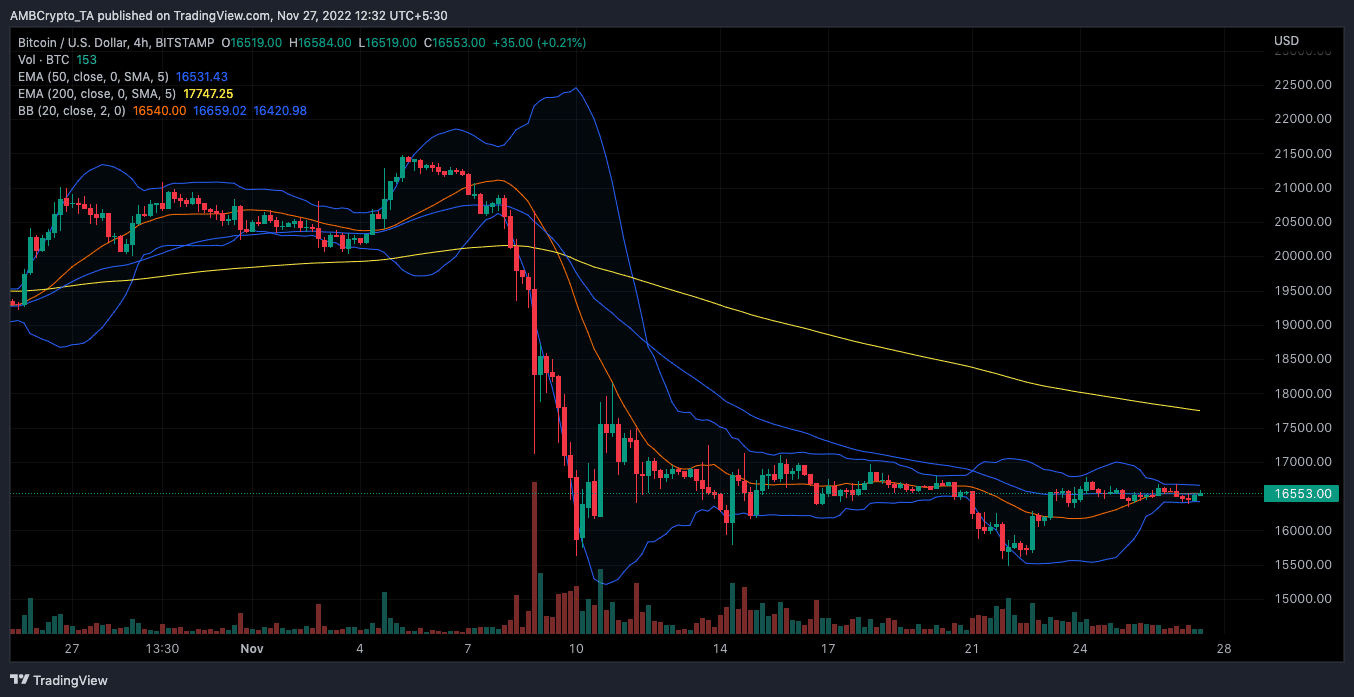 The above chart also looked at the Bollinger Bands (BB), which showed low volatility, at the time of writing. The inability of Bitcoin’s price to exceed the bands indicated that a price reversal might not be imminent. However, the condition did not mean that BTC’s price would not alter its direction in the long term.

Per its on-chain data, Bitcoin’s 365-day realized cap was 160.04 billion, according to Santiment. Considering that this value was a low point, it meant that very few holders have moved their coins in the last year. With no sign of revival, Bitcoin was less likely to head toward respite.

In addition, the 365-day dormant circulation had not found its way to exit the downtrend. At press time, the dormant circulation value was down to 443. This implied that these long-term holders have resisted transacting. Hence, there was the possibility of their assets still in losses with no noteworthy signal of recovery.

On another note, there could be some respite for short-term investors. This was the viewpoint of another CryptoQuant analyst, Ghoddusifar. According to him, the 30-day to 365-day Moving Average (MA) faced a potential bullish crossover due to the cross-up and cross-down trend. This, however, showed no certainty in the uptrend but can be seen as a pre-signal for the possibility.