Litecoin [LTC] has performed impressively on the price charts in recent weeks. The breakout past the range highs in late November was significant, as this range has been in play since May.

With Litecoin halving in August 2023 and rising hash rates in recent months, it was possible that LTC can rally well past the $100 mark in the coming months.

The scenario highlighted in this article is in the event of continued bullish momentum. A drop below the $85 and $80.6 levels could see a deeper retracement toward $76.3. However, bear market rallies can be extremely aggressive, and traders must remain cautious. 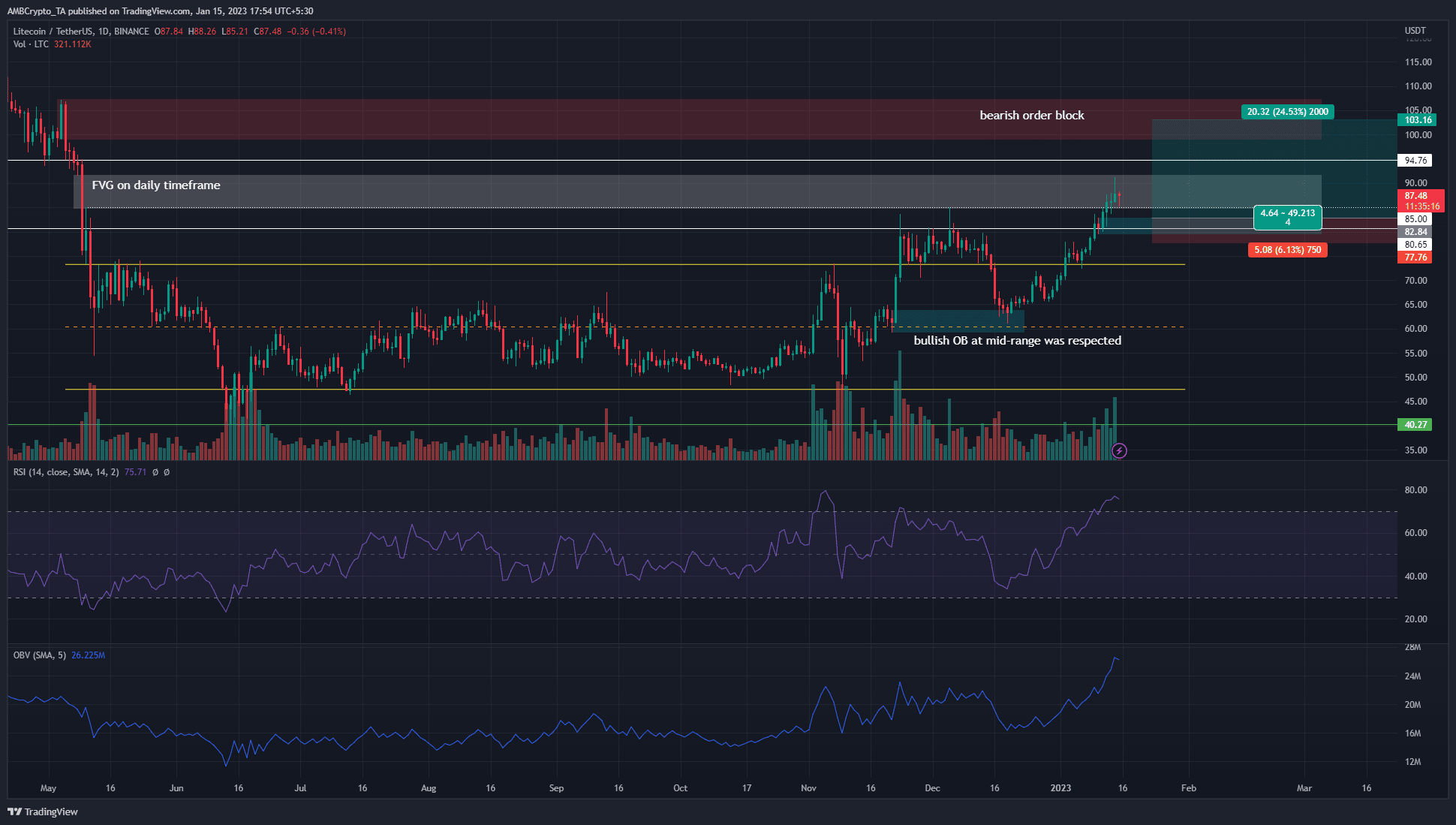 Litecoin had a strongly bullish outlook. It broke out past the range highs (yellow) at $73.3 on 23 November. The selling pressure in December saw LTC revisit the bullish order block at $60, which was also close to the mid-range value at $60.3.

Despite the pullback from $80 in December, the higher timeframe market structure remained bullish as the $59.25 was unbroken. This saw a follow-through from the bulls over the past two weeks, as they reclaimed the range highs and pushed higher still.

Is your portfolio green? Check the Litecoin [LTC] Profit Calculator

On the daily timeframe, a fair value gap was seen from $84.75-$91.75, demarcated in white. This inefficiency has been filled, but a reversal might not occur. Instead, Litecoin was likely to push higher to the bearish order block at the $99-$106 area, marked in red.

The RSI was in overbought territory but momentum continued to be strongly bullish, as the daily and 12-hour timeframes did not note a divergence yet. Similarly the OBV has also ascended northward swiftly over the past two weeks, to reinforce the idea of strong buying pressure.

Therefore, dips are for buying. A pullback to the $80 area (cyan) can be considered. It was a zone of consolidation on lower timeframes, and could see a swift bullish reaction. Invalidation of this idea is a daily session close below $79.4, while take-profit would be at the bearish order block above the psychological $100 level.

Santiment data showed funding rate was positive. This highlighted the bullish sentiment in the market, yet the MVRV ratio (30-day) was also in positive territory. This meant that, just like the late November rally, holders can look to book a profit over the next week or two.

This could introduce bearish pressure and can force a drop in Litecoin prices. If the dormant circulation metric also notes a sharp rise, it could underline the idea of profit-taking by holders from recent months.