5 cryptocurrencies that could benefit from a positive CPI report 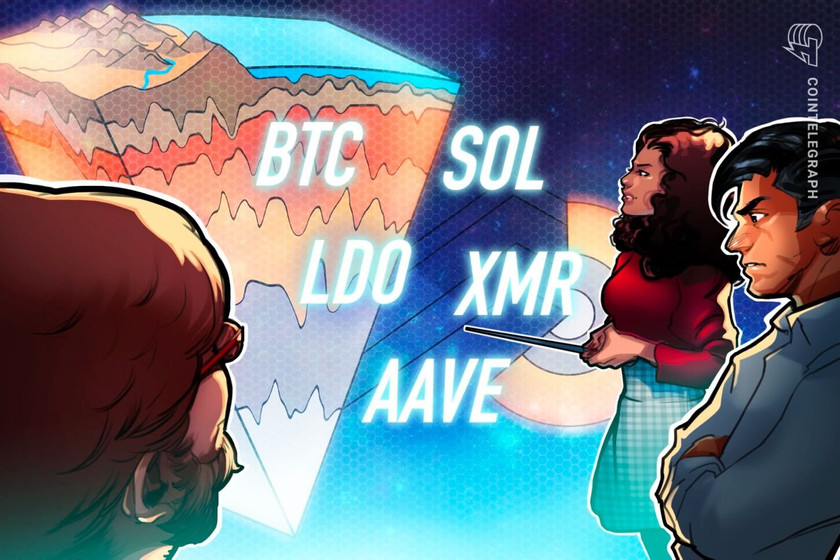 Crypto markets flip green following the continuation of last week’s rally in equities, and SOL, XMR, LDO and AAVE could be ready to move higher.

Bitcoin (BTC) has finally pushed above the $17,000 mark after rallying to $17,375 on Jan. 12. with both the bulls and the bears eyeing the Consumer Price Index (CPI) due on Jan. 12. If the print shows that inflation is cooling off, risk assets may rally, but a negative surprise could attract strong selling.

While some believe that a macro bottom could be forming in Bitcoin, others remain skeptical. They draw a parallel between the current bear market and the dot-com bubble burst. The United States Federal Reserve stopped raising rates in May 2000 but the Nasdaq did not bottom out for two more years. If the same scenario plays out with cryptocurrencies, then the next bull run may not start in a hurry. 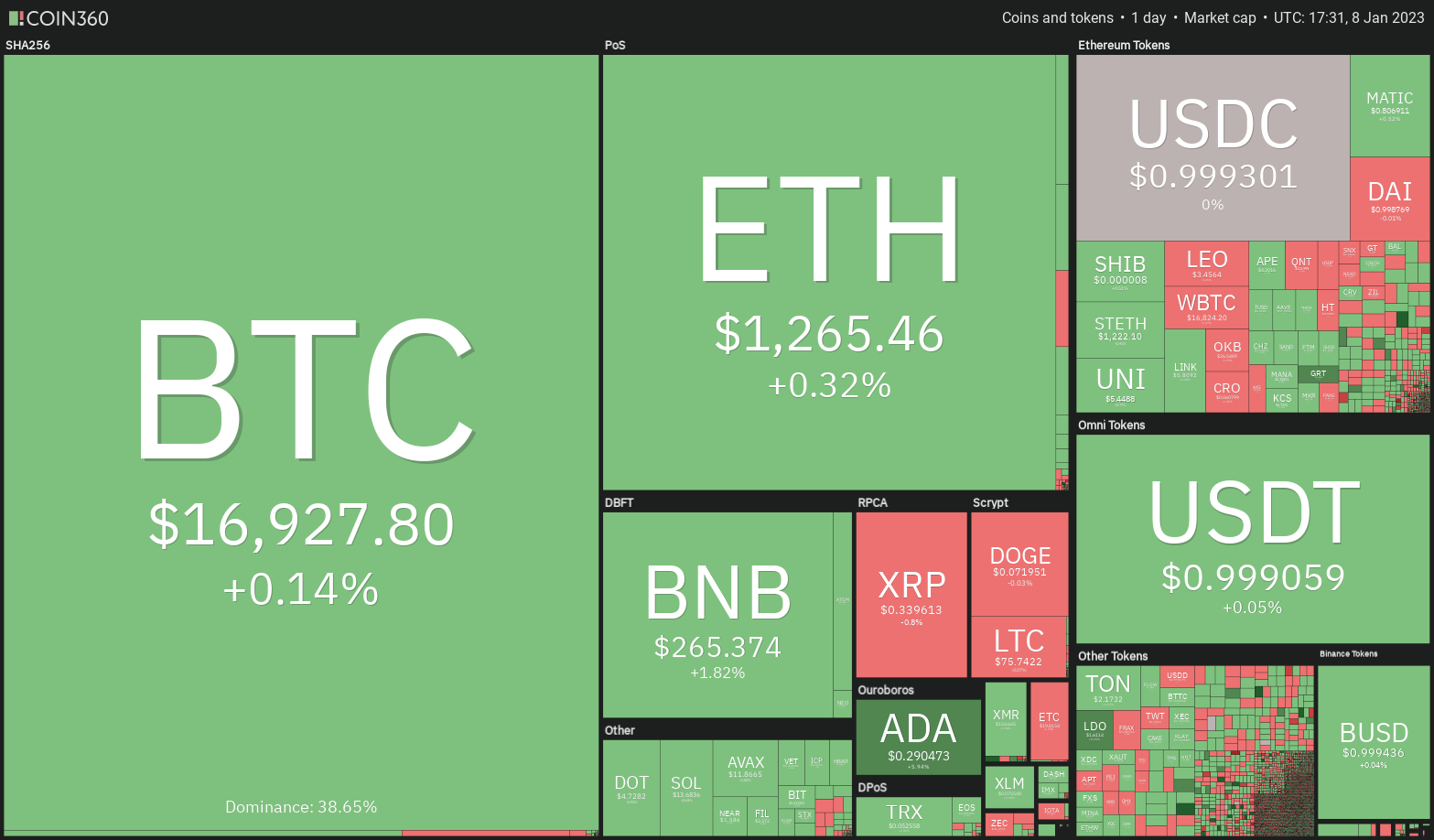 However, one positive for the future of the crypto industry is that legacy finance companies continue to show interest in the space. Laser Digital co-founder and CEO Jez Mohideen believes that the arrival of traditional companies could help regulate the cryptocurrency sector.

Do the charts signal a rally in Bitcoin? What are the other altcoins that are showing a positive chart structure? Let’s find out.

Bitcoin has been trading above the moving averages since Jan. 4. This is the first indication that the selling pressure could be reducing. The price reached the overhead resistance at $17,061 on Jan. 6 but the bulls could not ascend this level. This indicates that the bears have not given up yet. 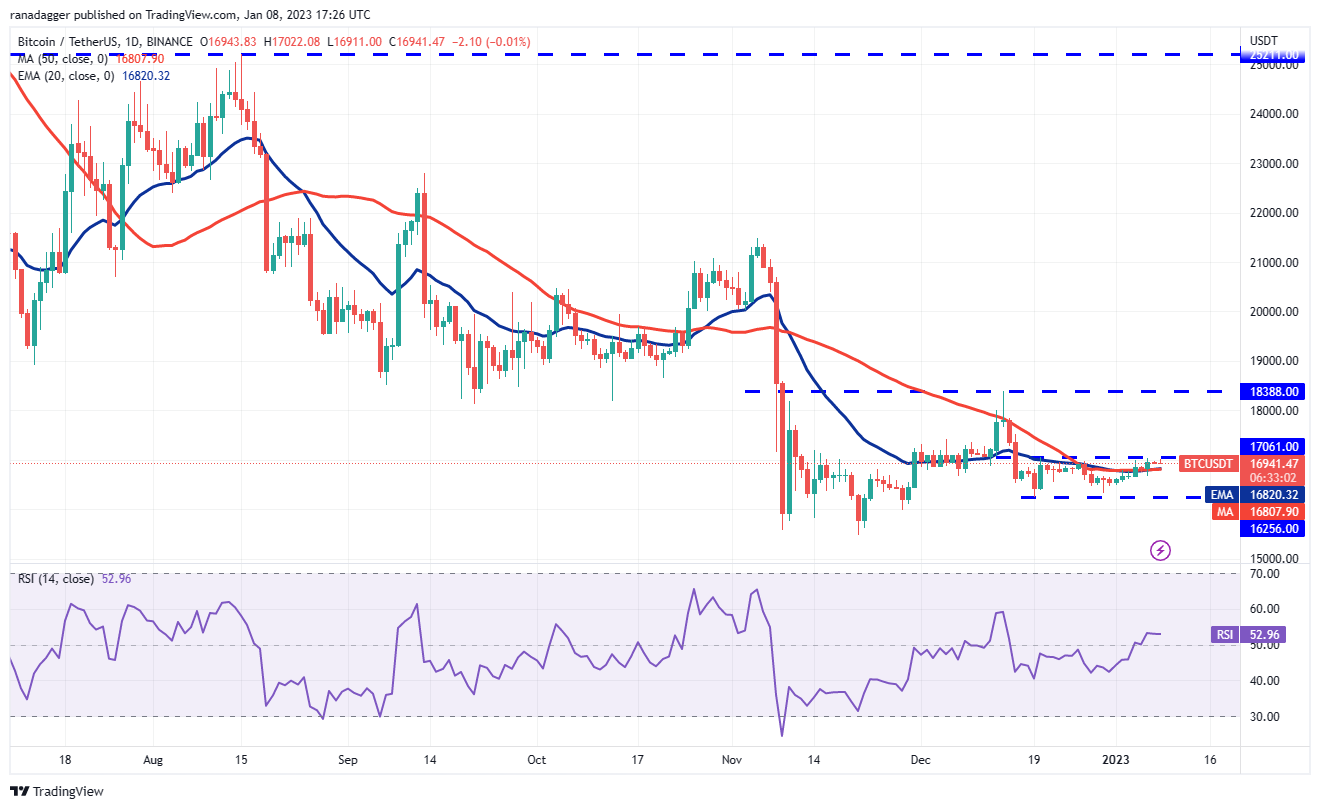 A minor positive in favor of the bulls is that they have not allowed the BTC/USDT pair to tumble below the moving averages. If the price consolidates between the moving averages and $17,061 for some time, the prospects of a break above the overhead resistance could improve. If bulls kick the price above $17,061, the pair could surge toward $18,388.

Alternatively, if the price turns down and slumps below the moving averages, it will indicate that the pair could remain stuck between $17,061 and $16,256 for a few more days. 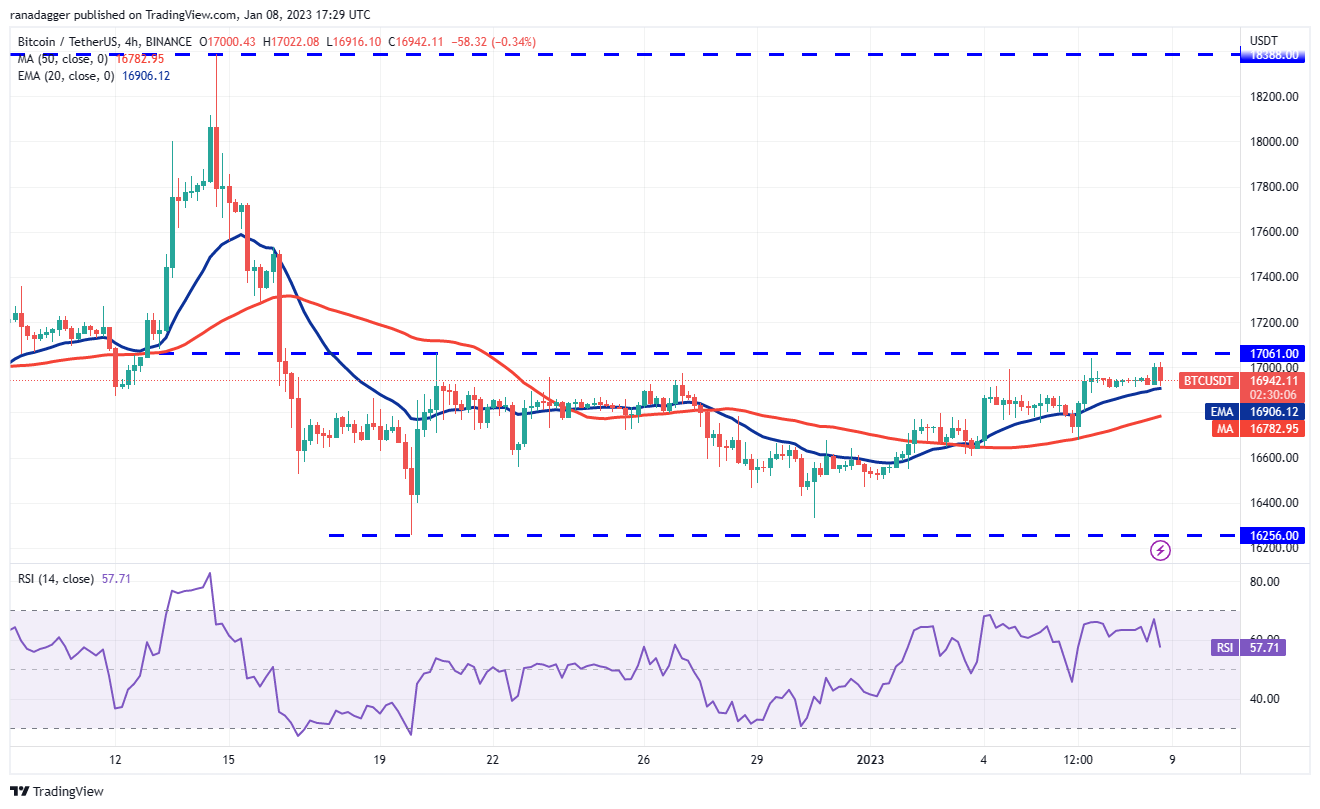 The 4-hour chart shows that bears are guarding the $17,061 level but they have not been successful in pulling the price below the 20-exponential moving average. This suggests that buyers are not rushing to the exit as they expect a break above the overhead resistance.

The gradually upsloping 20-EMA and the relative strength index (RSI) in the positive territory indicate that buyers have a slight edge. A break above $17,061 could signal the start of a new up-move in the near term.

If bears want to regain control, they will have to sink the price below the 50-simple moving average. The pair could then decline to $16,600 and stay inside the range for a while longer.

Solana (SOL) has been a huge underperformer in the past several months but the price action of the past few days increases the likelihood of a possible relief rally. It is too early to predict whether the expected move is a dead cat bounce or the start of a sustained recovery. However, the setup could be of interest to short-term traders. 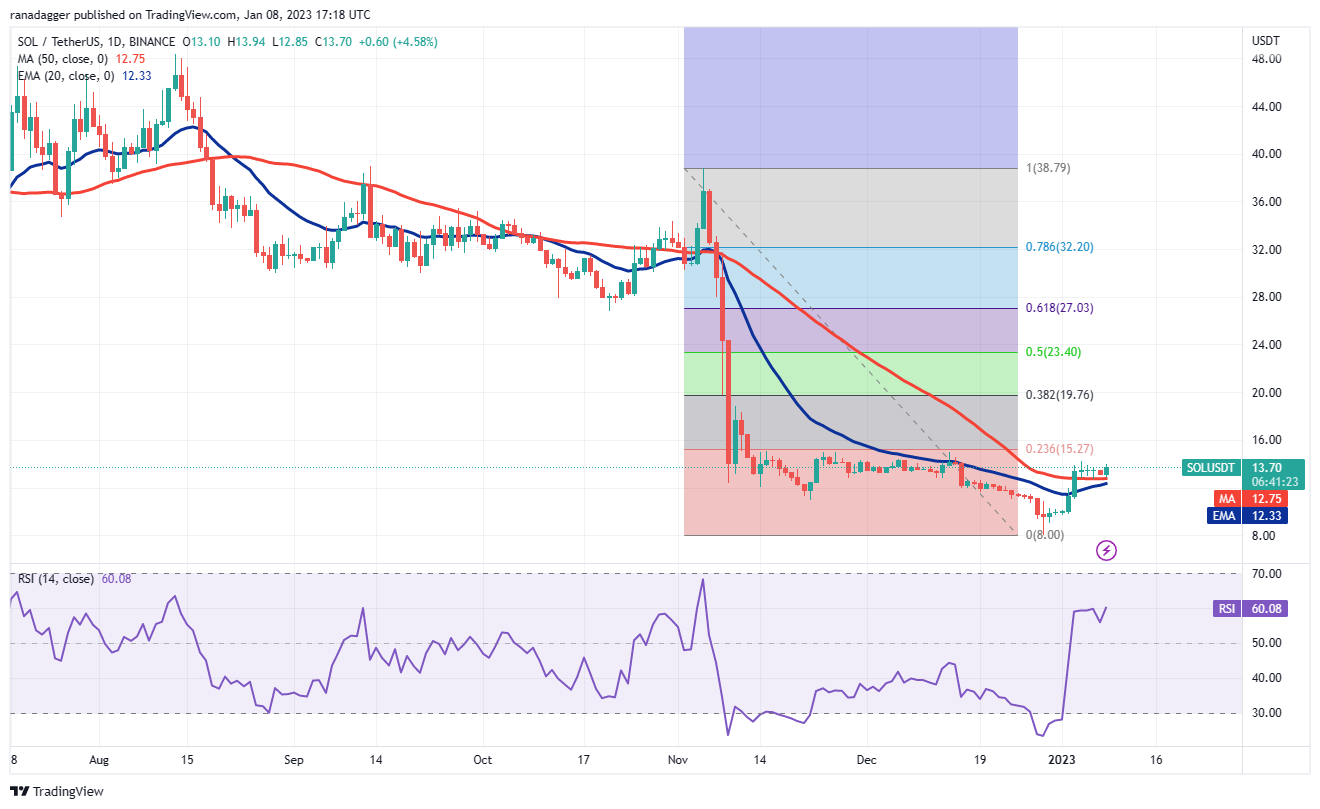 The SOL/USDT pair has rallied sharply from the Dec. 29 low of $8. Buyers propelled the price above the 50-day SMA ($12.75) on Jan. 3 and have managed to sustain the pair above this level since then. This suggests that the bulls are trying to flip the moving averages into support.

If the price breaks above the overhead resistance at $15, the pair could accelerate toward $19. This level may again act as a barrier but if crossed, the rally could extend to the 50% Fibonacci retracement level of $23.40.

The bulls may lose their grip if the price turns down and slides below the moving averages. Such a move will indicate that bears are active at higher levels. 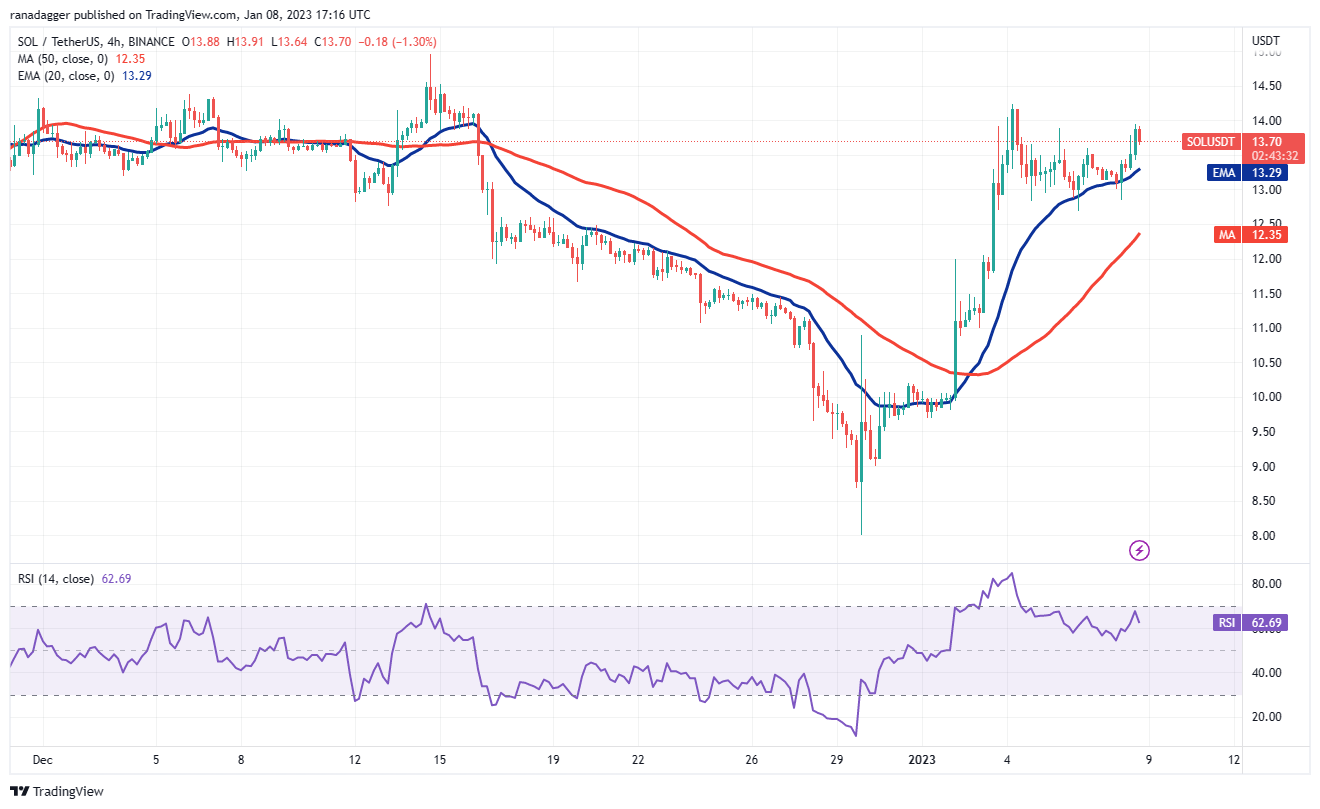 The 4-hour chart shows that the price pulled back to the 20-EMA but the bulls purchased this dip. This indicates a change in sentiment from selling on rallies to buying on dips. The bulls will try to extend the up-move by driving the price above the $14.24 to $15 resistance zone.

On the other hand, the bears will try to pull the price below the 20-EMA. If they can pull it off, the pair could slump to the 50-SMA. This level may behave as a support but if bears sink the price below it, the decline could extend to $11.

Monero (XMR) broke out of the falling wedge pattern on Jan. 5 and buyers have managed to sustain the price above the breakout level for three days. This indicates a potential trend change. 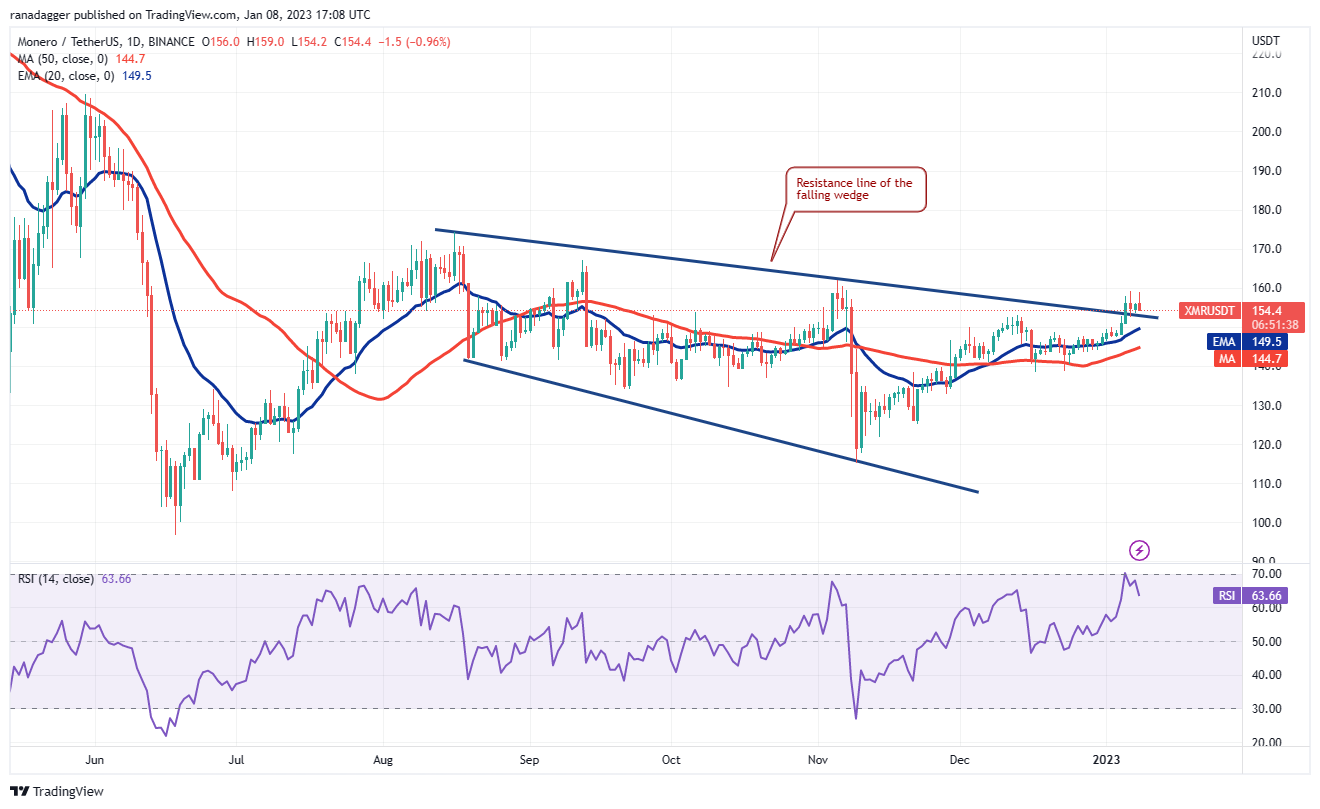 The moving averages have turned up and the RSI is in the positive territory, signaling that buyers have the upper hand. There is a minor resistance at $162 and then again at $167 but both these levels are likely to be crossed.

The XMR/USDT pair could thereafter reach the overhead resistance at $174. This level may act as a major obstacle but if bulls manage to overcome it, the pair could soar to $200.

Contrary to this assumption, if the price turns down and plummets below the moving averages, it will suggest that the breakout from the wedge may have been a bull trap. The downward momentum could pick up on a break below $138. 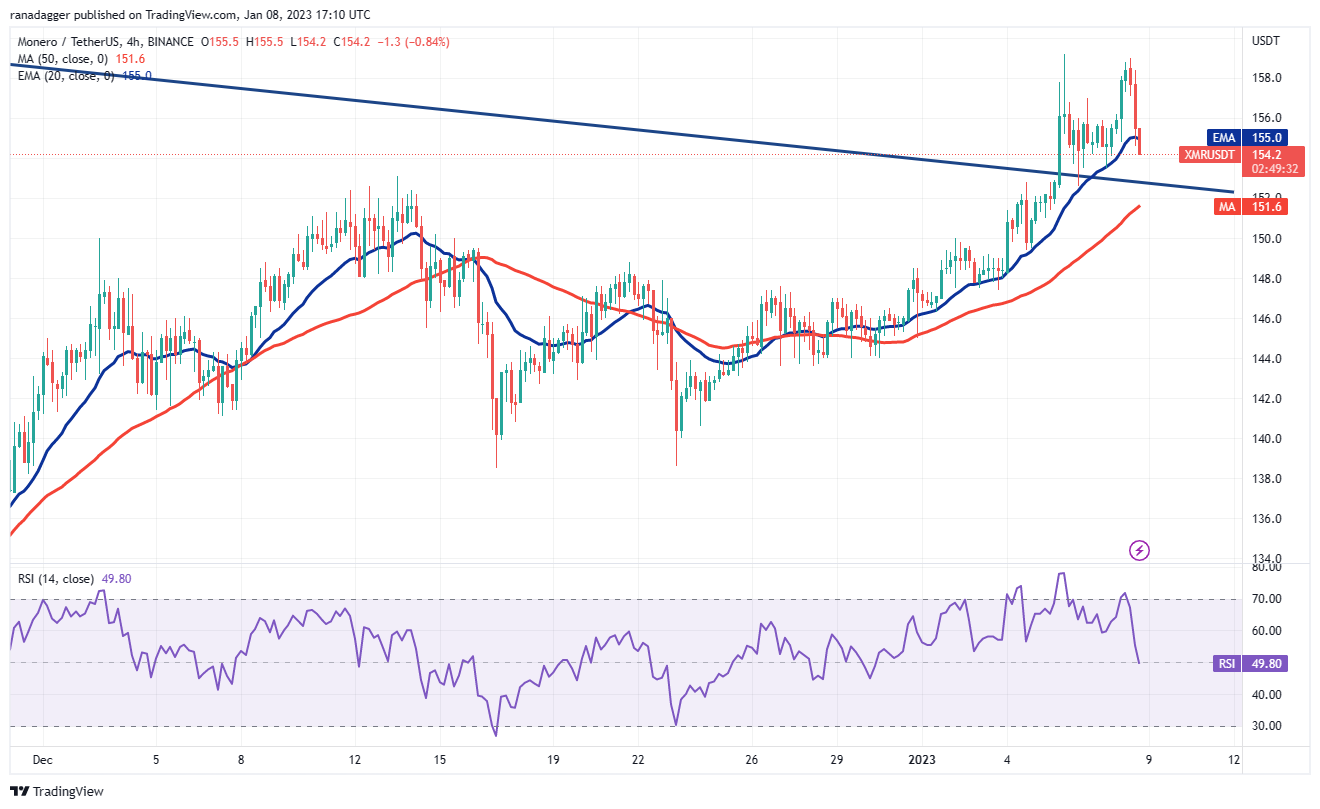 The 4-hour chart shows that the bears are trying to form a short-term double-top pattern near $160. Sellers have pulled the price below the 20-EMA, which opens the doors for a possible drop to the 50-SMA. The bulls may fiercely protect the moving averages because a break below it could tilt the advantage in favor of the bears.

If the price turns up from the current level, it will suggest that lower levels are attracting buyers. The pair could then once again rise to the overhead resistance at $160. If this resistance is scaled, the up-move could resume.

Lido DAO (LDO) broke out of the downtrend line on Jan. 1 and made a sharp move higher. This suggests the downtrend may have ended. 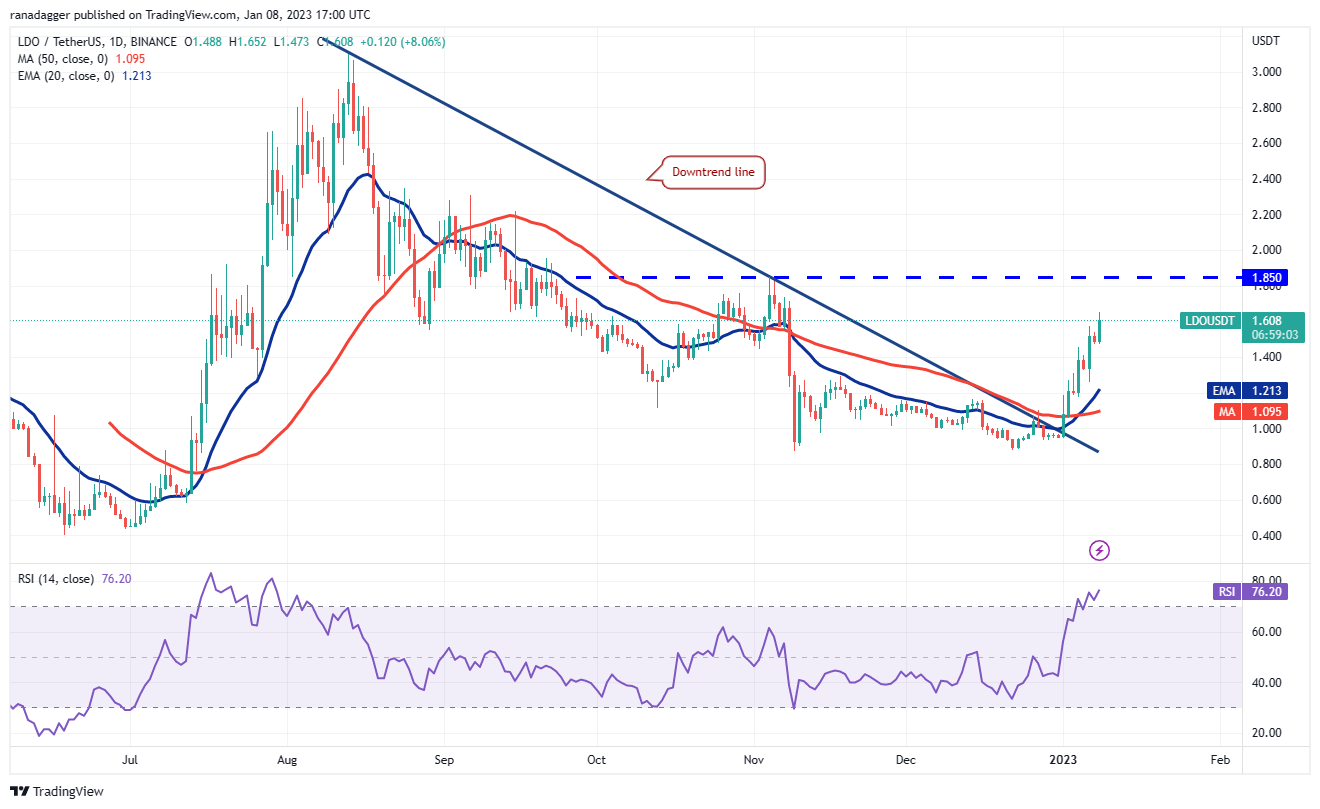 The moving averages have completed a bullish crossover, indicating that buyers have the upper hand but the overbought levels on the RSI point to a short-term correction or consolidation.

If buyers do not give up much ground from the current level, the LDO/USDT pair could reach the overhead resistance at $1.85. This level may again act as a strong barrier but if bulls overcome it, the pair could reach $2.30.

The first sign of weakness will be a break below the 20-day EMA ($1.21). Such a move will suggest that bears are selling on rallies. 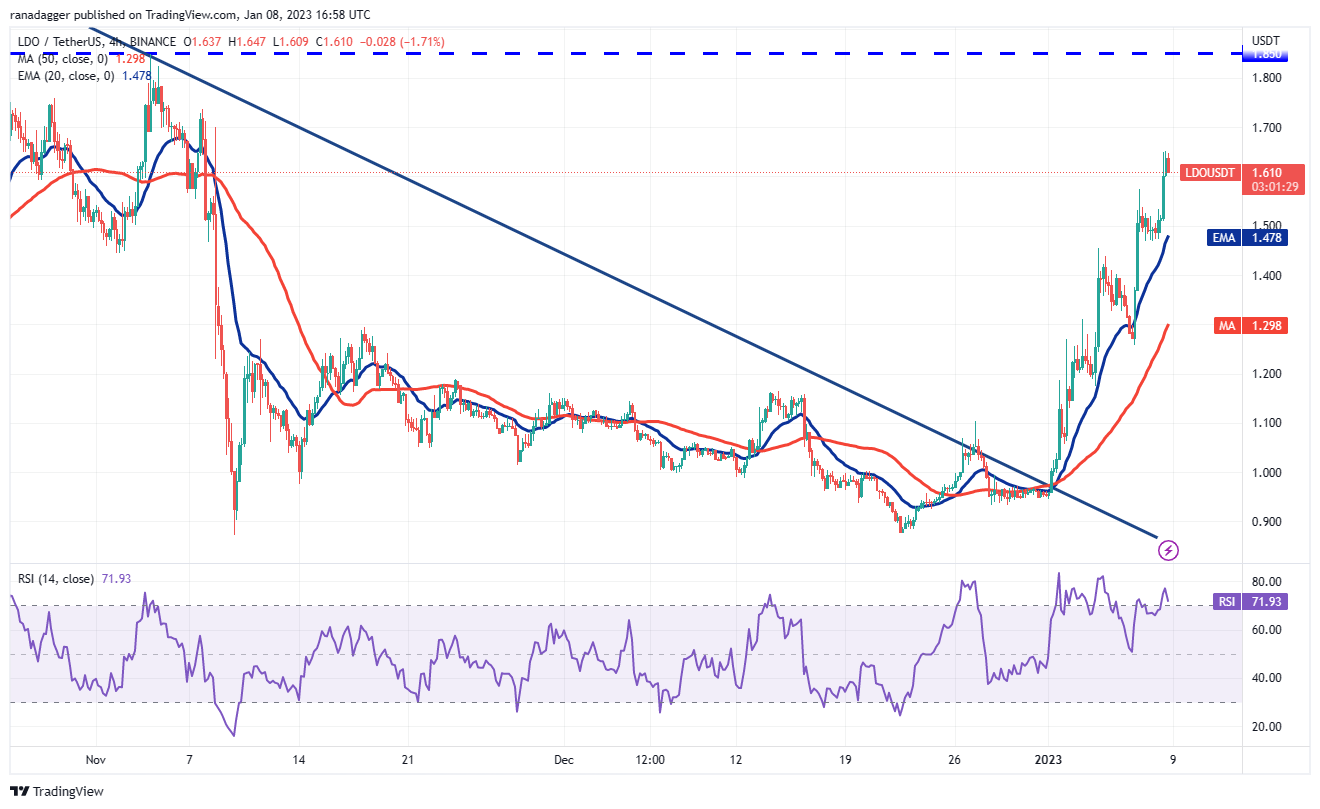 The 4-hour chart shows that the pair has started an uptrend. The upsloping moving averages and the RSI in the overbought zone suggest that bulls remain in control. There is a minor resistance at $1.71 but if that is crossed, the rally could reach $1.85.

The 20-EMA has acted as a strong support during pullbacks, hence this remains an important level to keep an eye on in the near term. If this support cracks, the pair could slide to the 50-SMA.

Buyers successfully defended the psychological support near $50 and are trying to form a double bottom pattern. This is the reason for selecting Aave (AAVE). 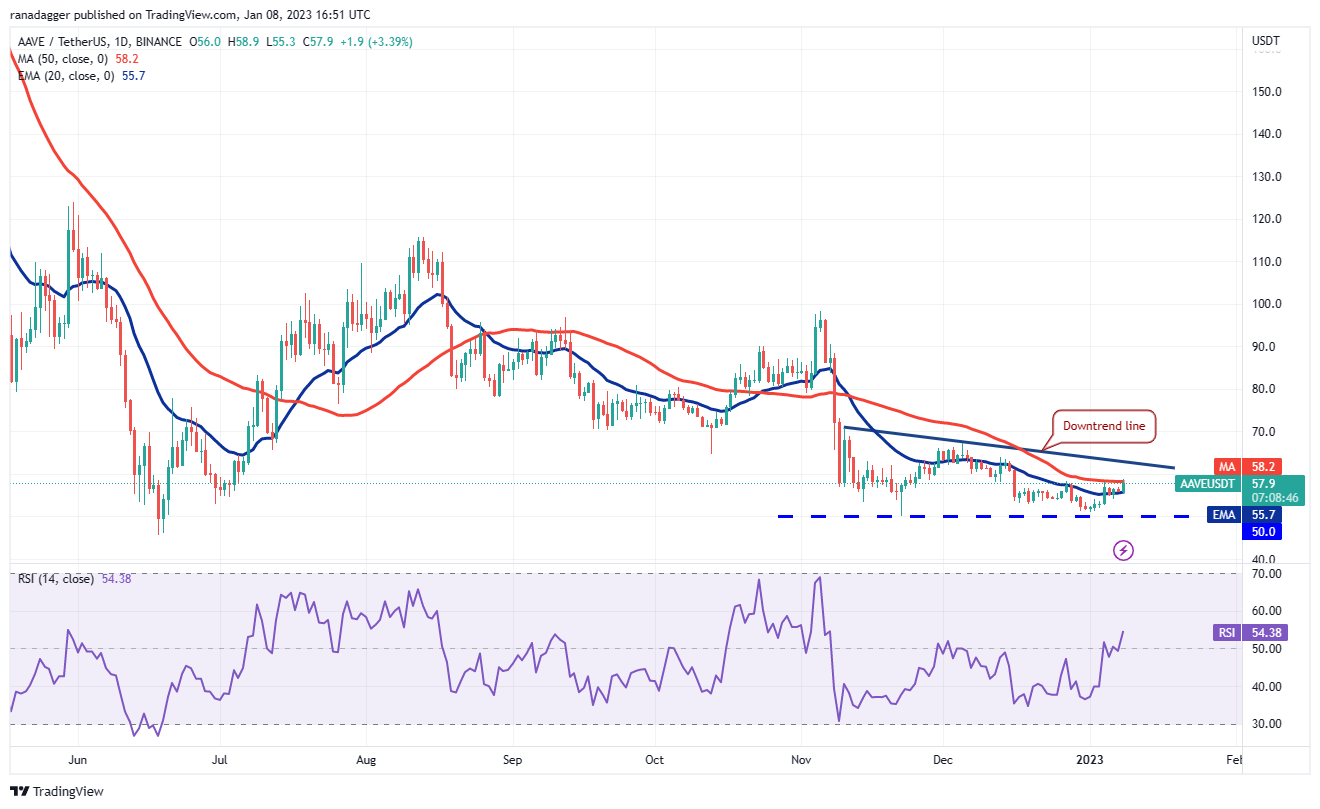 The bounce off the strong support at $50 has reached the 50-day SMA ($58). Both moving averages have flattened out and the RSI has jumped into the positive territory, indicating advantage to buyers.

If bulls thrust the price above the 50-day SMA, the AAVE/USDT pair could rally to the downtrend line and thereafter to $67. A break and close above this level will complete a double bottom which has a pattern target of $ 84.

This bullish view will be invalidated if the price turns down and plummets below the vital support at $50. 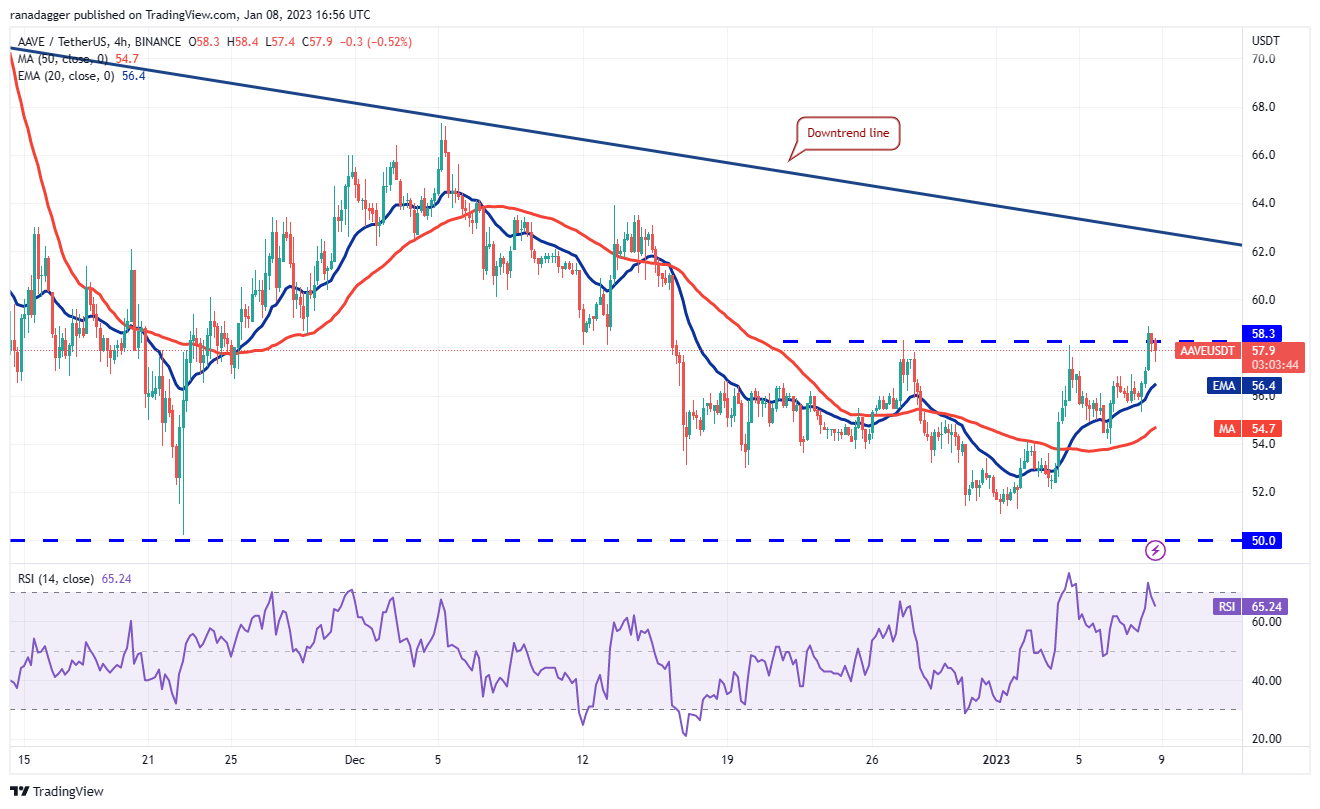 The bulls are trying to push and sustain the price above the immediate overhead resistance near $58. If they manage to do that, the pair could rally to the downtrend line. This level may act as a strong hurdle but on the way down, if bulls flip the $58 level into support, it could increase the likelihood of a break above the downtrend line.

The first support to watch on the downside is the 20-EMA. If this level gives way, the pair could slide to $54. This is an important level for the bulls to defend if they want to keep the short-term momentum in their favor.