5 altcoins that could breakout if Bitcoin price stays bullish 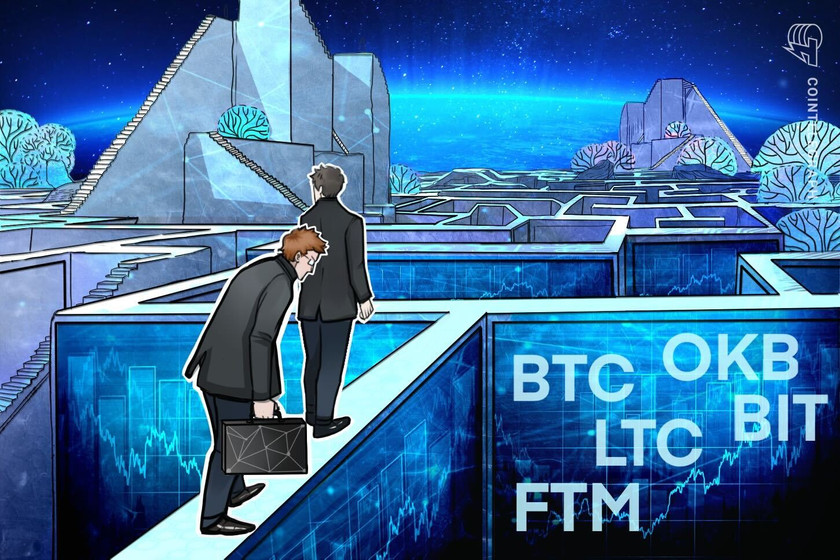 Bitcoin has turned bullish, but is it a dead cat bounce? If BTC bulls keep pace, LTC, OKB, BIT and FTM could see strong rallies.

The cryptocurrency markets have made a strong comeback in the past few days. That drove the total crypto market capitalization to $995 billion on Jan. 14, according to CoinMarketCap data. Bitcoin (BTC) led the recovery from the front and skyrocketed above $21,000 on Jan. 14.

After the sharp rally, the big question is whether the recovery is a dead cat bounce that is a selling opportunity, or is it the start of a new uptrend. It is difficult to predict with certainty if a macro bottom has been made but the charts suggest that a bottoming process has begun. 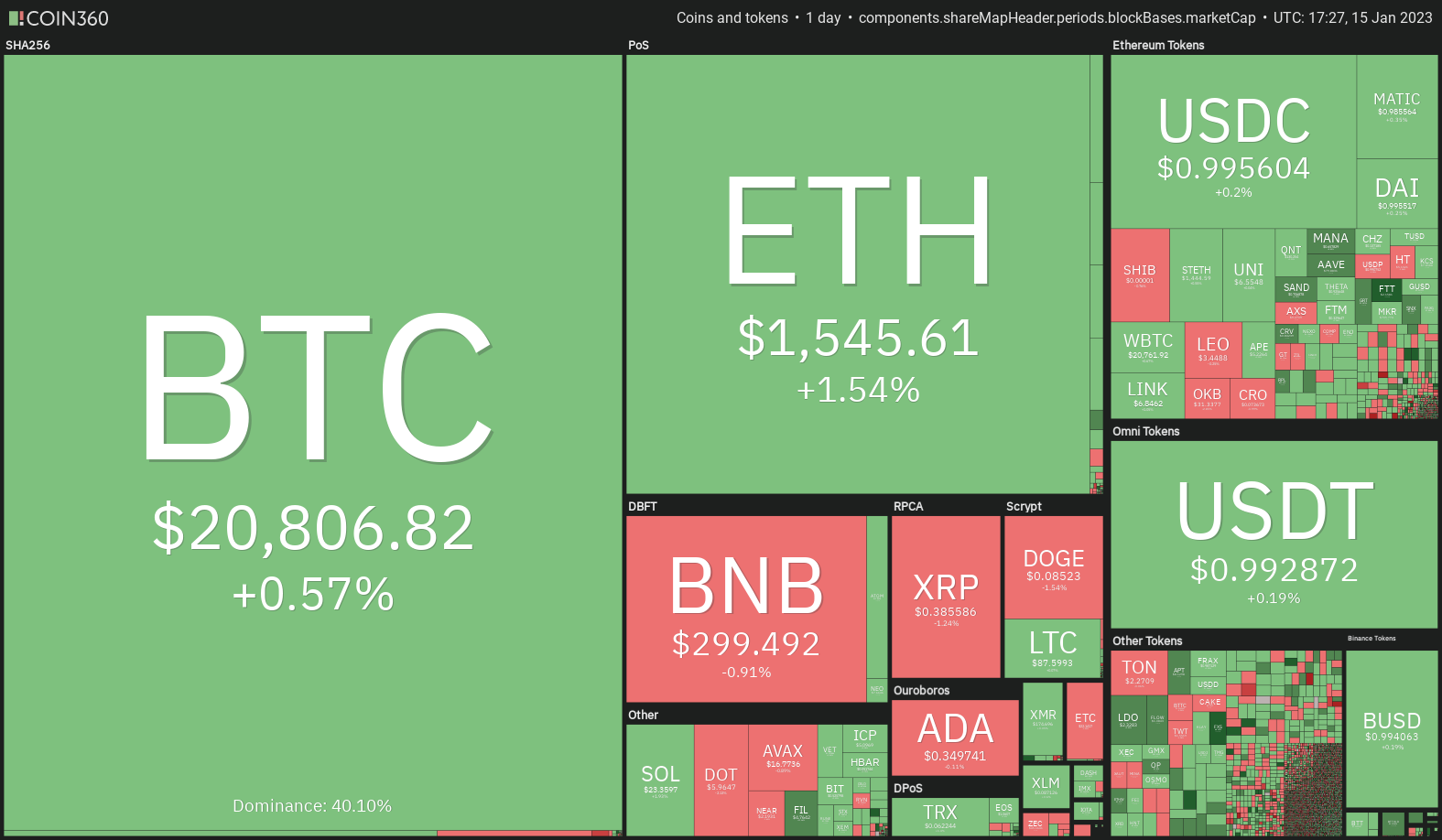 Independent market analyst HornHairs highlighted that the 2017 to 2018 bear market lasted for 364 days and from 2021 to the current market low, the duration is again 364 days. Another interesting similarity is that the 2015 to 2017 bull market and the 2018 to 2021 bull phase both lasted for 1,064 days. If history repeats itself, then Bitcoin may make the next top in roughly 1,000 days.

Bitcoin's short term price action has been exciting for bulls but are there altcoins that are showing similar strength in the near term?

Let’s study the charts to find out.

Bitcoin shot up to $21,258 on Jan. 13 and that propelled the relative strength index (RSI) above 89, signaling that the rally was overheated in the short term. The bears are expected to mount a strong defense at $21,500. 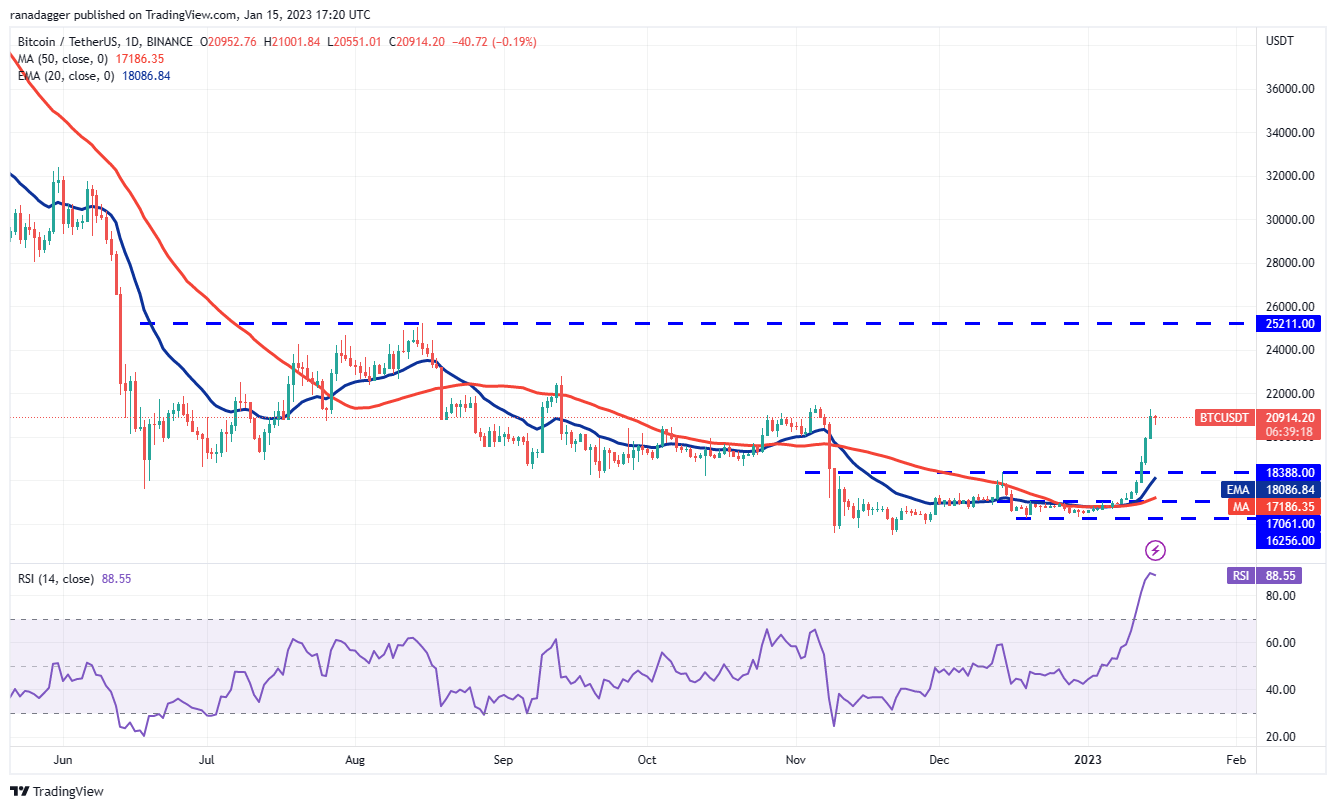 Sometimes, when a trend change happens, the RSI may remain in the overbought territory for a long time. If the BTC/USDT pair does not give up much ground from the current level, it will suggest that traders are in no hurry to book profits as they anticipate another leg higher.

On the way down, the bears will have to drag the price below the psychological level of $20,000 to make a dent in the bullish momentum. The pair could then slump to the breakout level of $18,388. 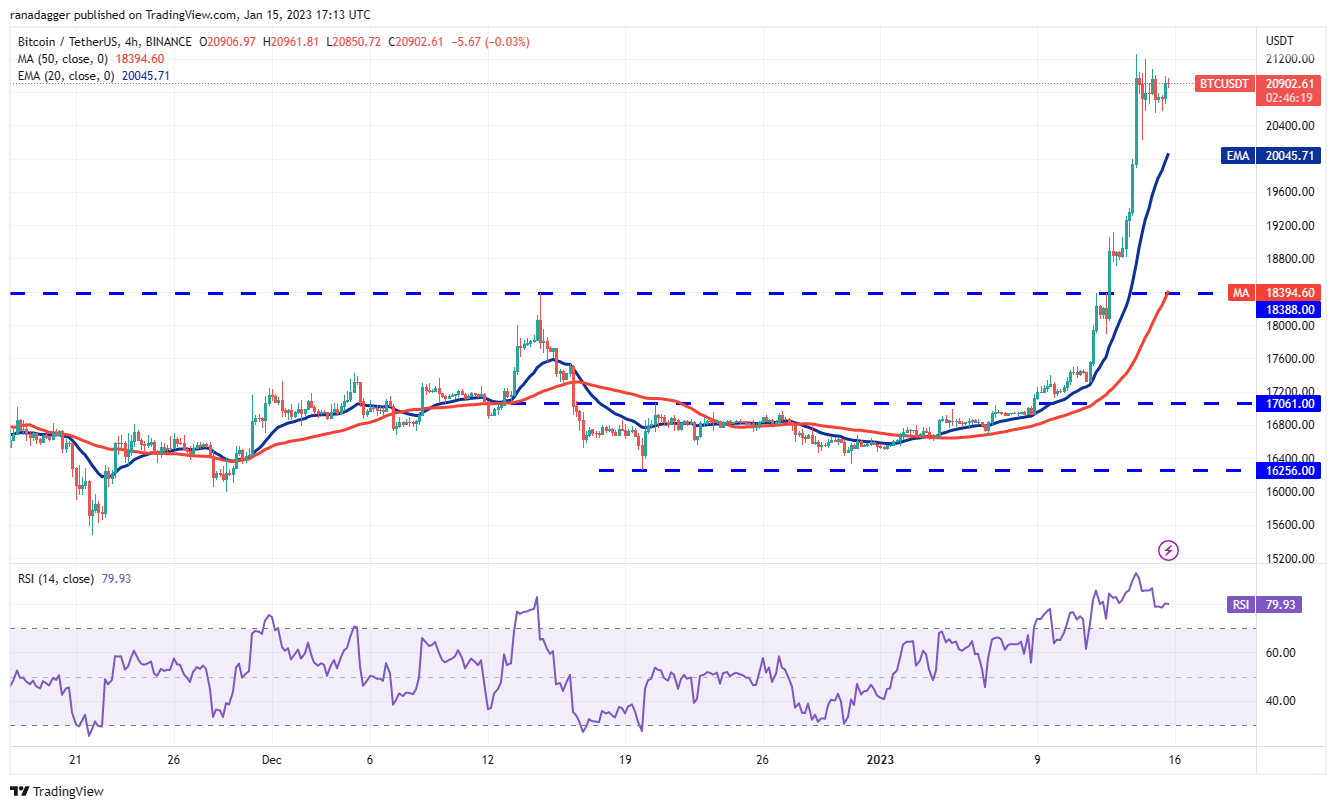 The 4-hour chart shows that the bears are guarding the $21,250 level but a positive sign is that the bulls have not allowed the price to slide back below $20,000. Buyers may again attempt to clear the overhead hurdle at $21,258 and resume the uptrend.

On the contrary, if the price once again turns down from $21,250, it may tempt short-term traders to book profits. That could sink the pair below the 20-EMA. The bears may try to capitalize on this situation and pull the pair to $18,388.

Litecoin (LTC) broke above the overhead resistance at $85 on Jan. 12, indicating the start of a new uptrend. There is no major hurdle until the price reaches $107. 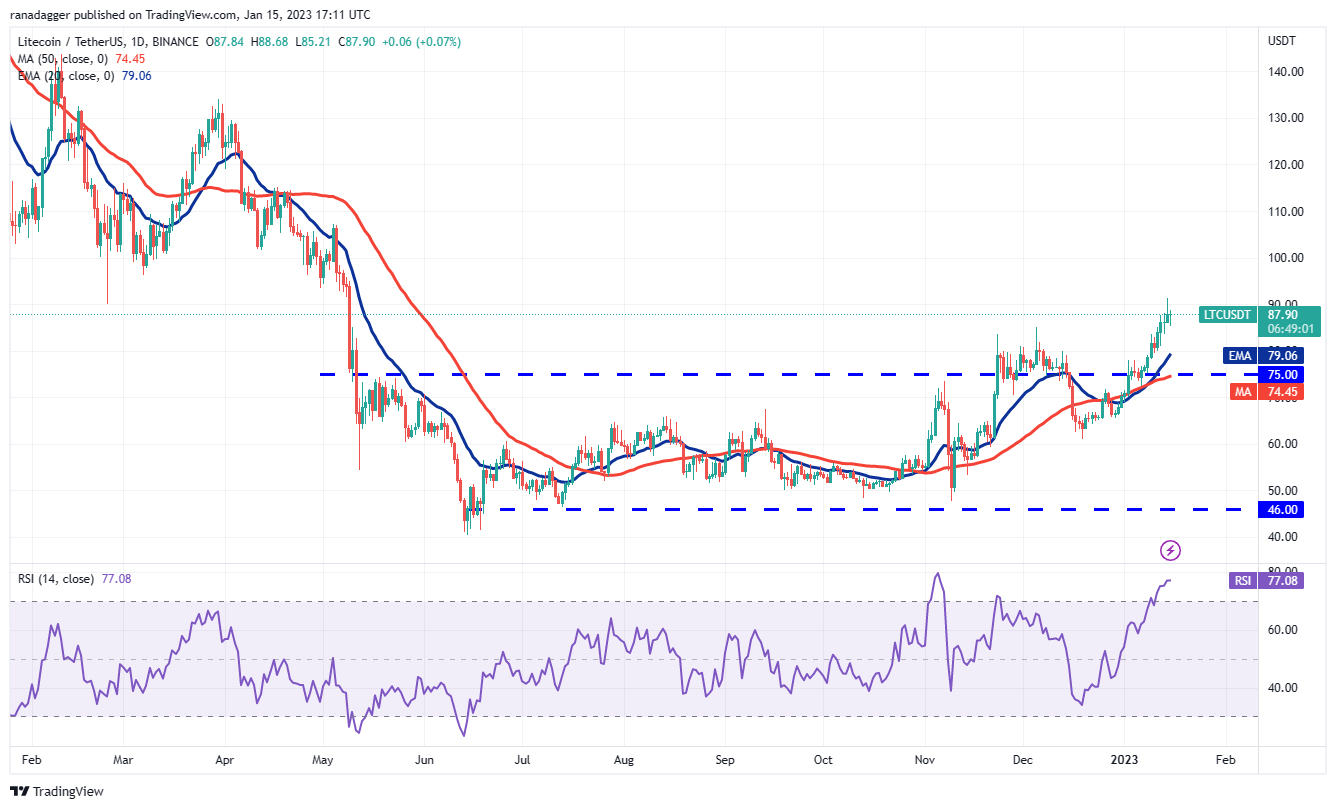 On the downside, the bulls will try to fiercely defend the zone between $85 and the 20-day EMA ($79). If the price springs back from this zone, the LTC/USDT pair could continue its uptrend and reach $107.

The upsloping moving averages signal advantage to bulls but the RSI above 77 suggests that a minor pullback or consolidation is likely.

If bears want to gain the upper hand, they will have to pull the price below the breakout level of $75. That could make way for a collapse to $61. 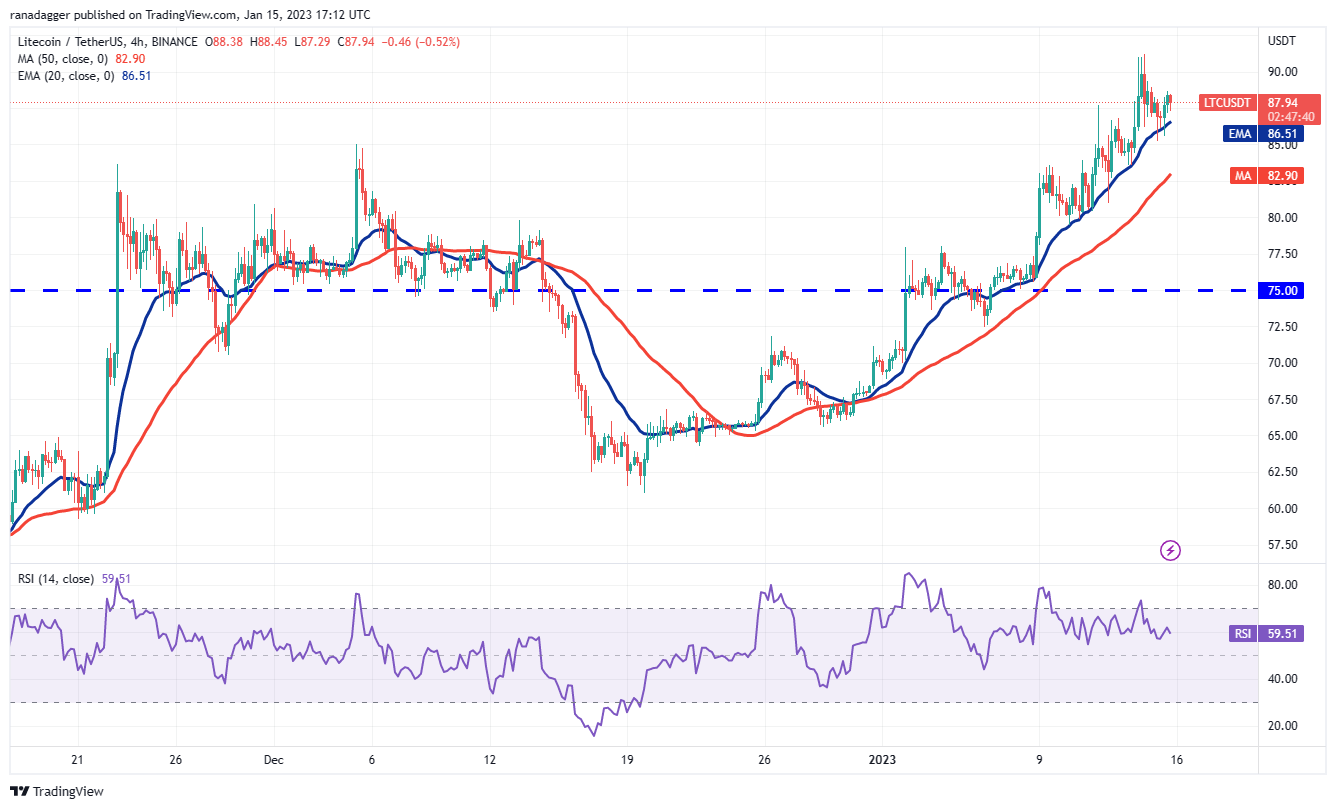 The 4-hour chart shows the pair is in an uptrend and the bulls are fiercely protecting the 20-EMA. If buyers drive the price above $92, the pair could pick up momentum and rally toward the psychological level of $100.

Conversely, if the price turns down and dives below the 20-EMA, it will suggest that short-term traders may be booking profits. That could pull the price to the 50-SMA. This is an important level for the bulls to defend because a break below it could heighten the risk of a drop to $80 and then $75.

While several cryptocurrencies are attempting to bottom out, OKB (OKB) has started a new uptrend. Usually, it is a good strategy to buy the dips in an uptrend by keeping a suitable stop loss. 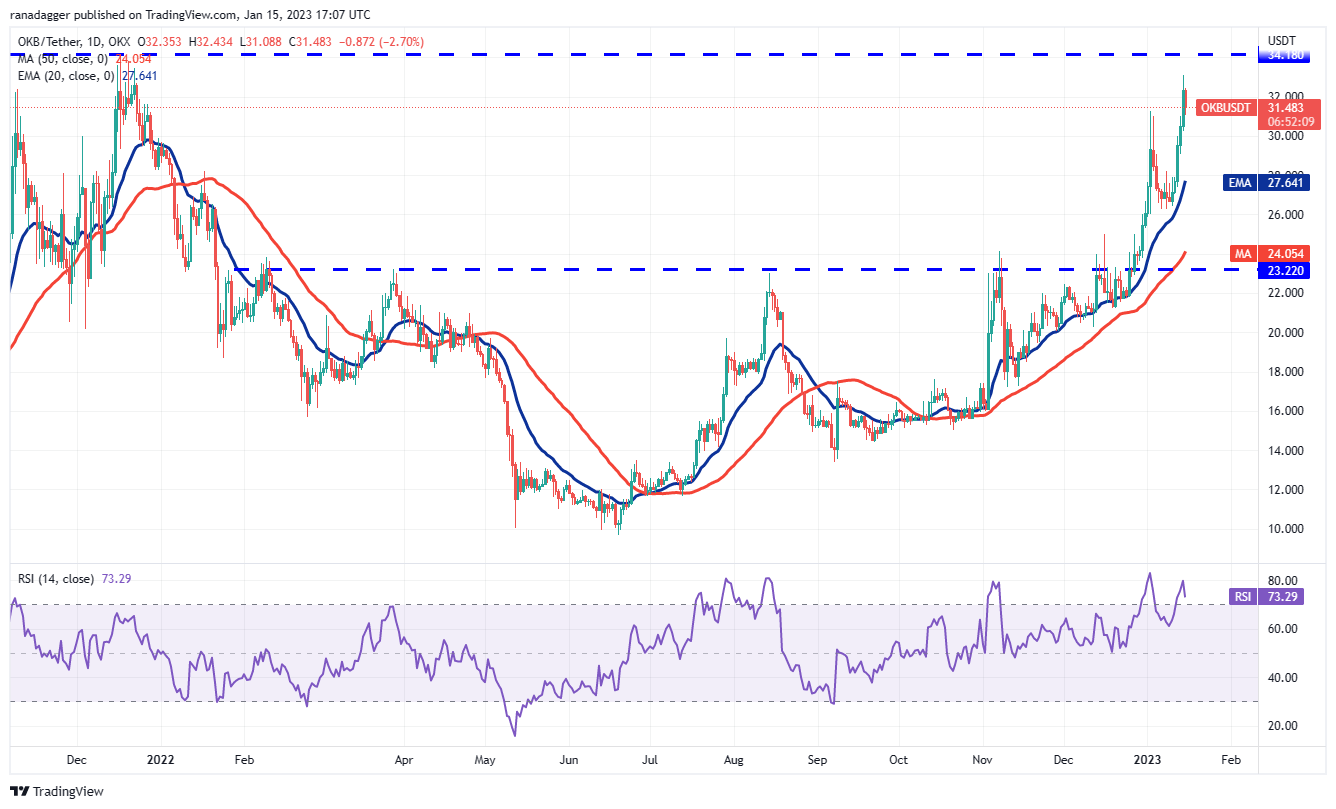 The upsloping moving averages and the RSI in the overbought territory indicate that bulls are in command but a short-term consolidation or correction can't be ruled out. The OKB/USDT pair could slip to the 20-day EMA ($27.64), which is likely to act as a strong support.

If the price rebounds off this level, the pair could touch the strong overhead barrier at $34.18. Crossing this level may be a difficult task but if the bulls manage to achieve it, the pair could skyrocket to $42. 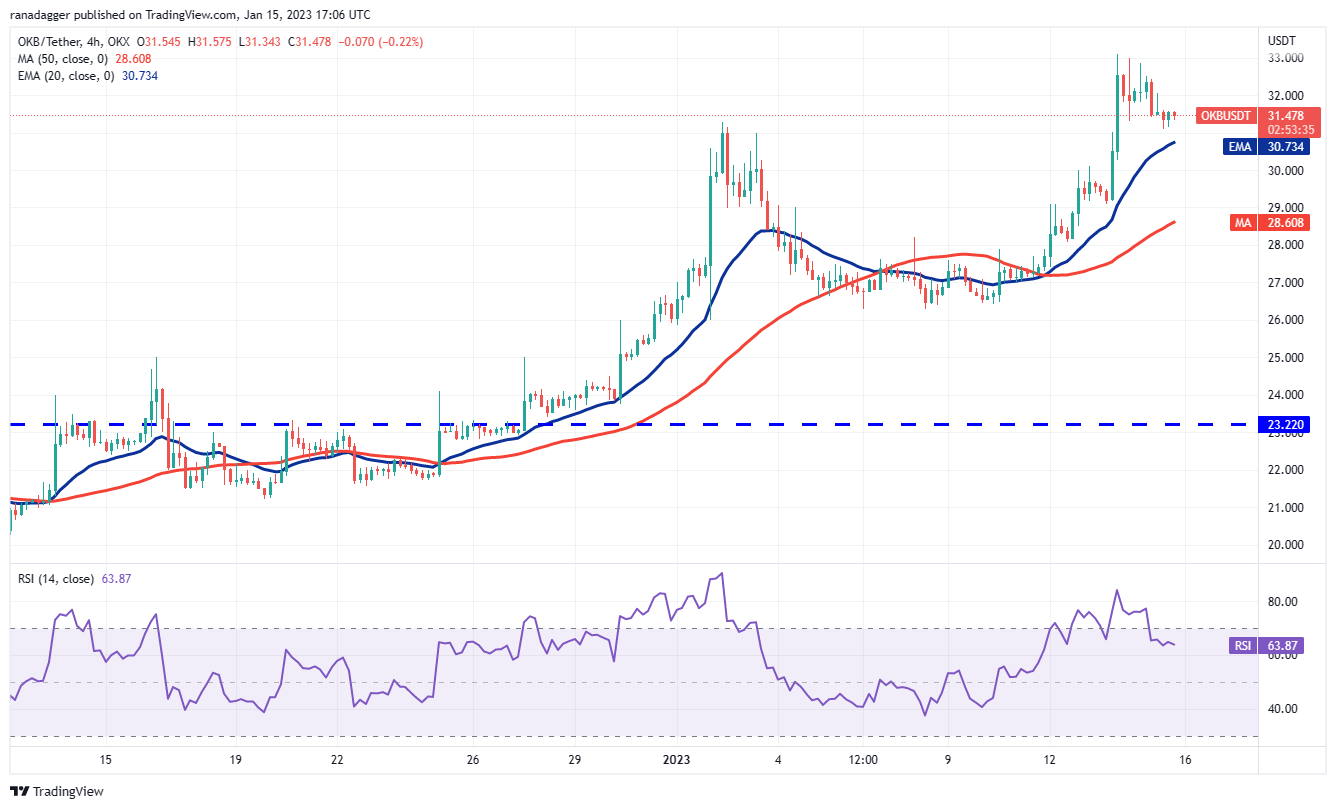 The 4-hour chart shows that the uptrend met with strong selling near $33 and the pair could correct to the 20-EMA. If the price rebounds off this support, it will suggest that bulls are buying on every minor dip. That could drive the price to $34.18.

Contrarily, if the price plunges below the 20-EMA, the correction could deepen to the 50-SMA. If the price rebounds off this level, the bulls will again try to resume the up-move but may face resistance at $31 and again near $33.

Related: Bitcoin fails to convince that bottom is in with $12K 'still likely'

BitDAO (BIT) rallied sharply from $0.26 on Dec. 27 to $0.53 on Jan. 14, indicating a strong bullish momentum. In addition, the shallow pullback on Jan. 15 suggests that traders are not exiting their positions in a hurry as they anticipate the up-move to continue. 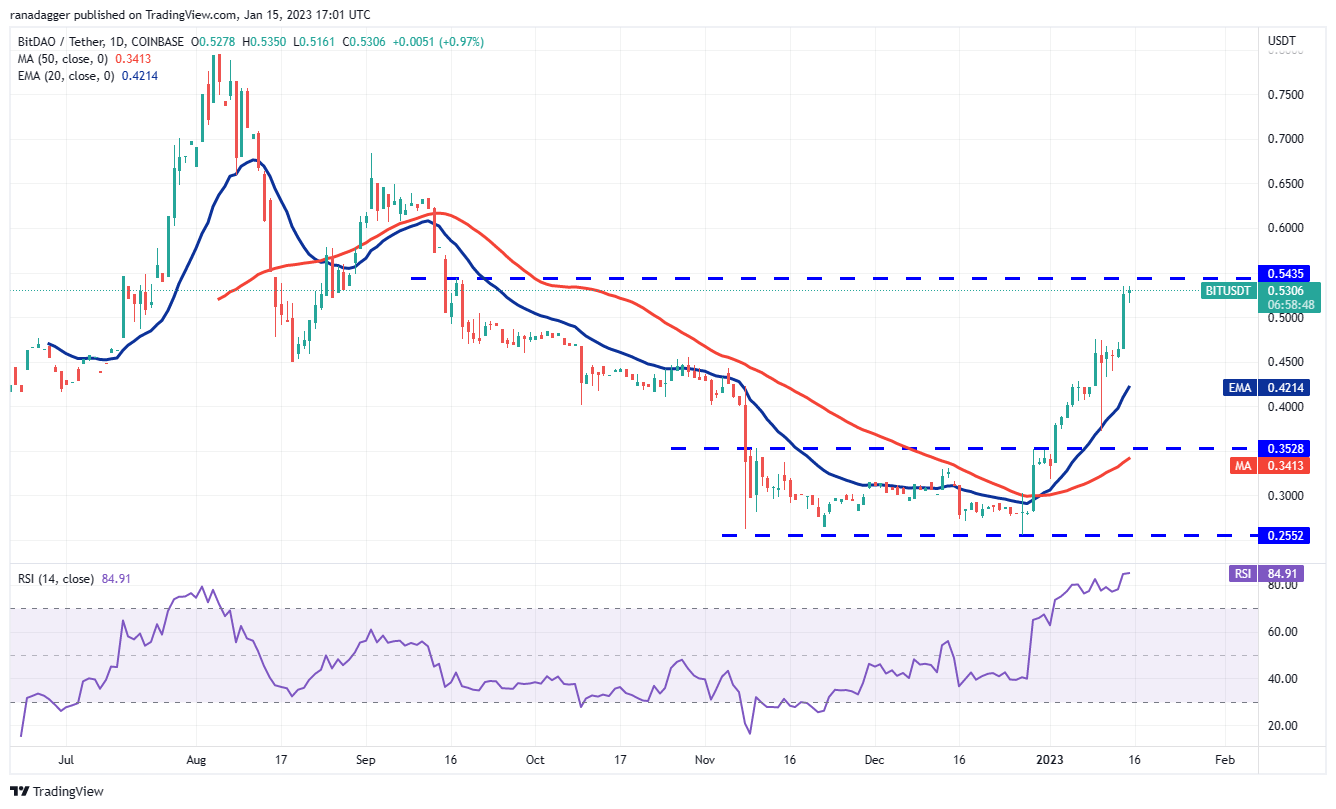 If bulls thrust the price above the overhead resistance at $0.54, the BIT/USDT pair could resume its up-move. The next resistance on the upside is at $0.68. The bears may pose a strong challenge at this level because a break and close above it could open the doors for a possible rally to $0.80.

On the downside, the first support is at $0.46 and then the 20-day EMA ($0.42). A strong bounce off either support will suggest that traders are buying on declines. That could result in a retest of $0.54. The bears may take control if they sink the price below the 20-day EMA. 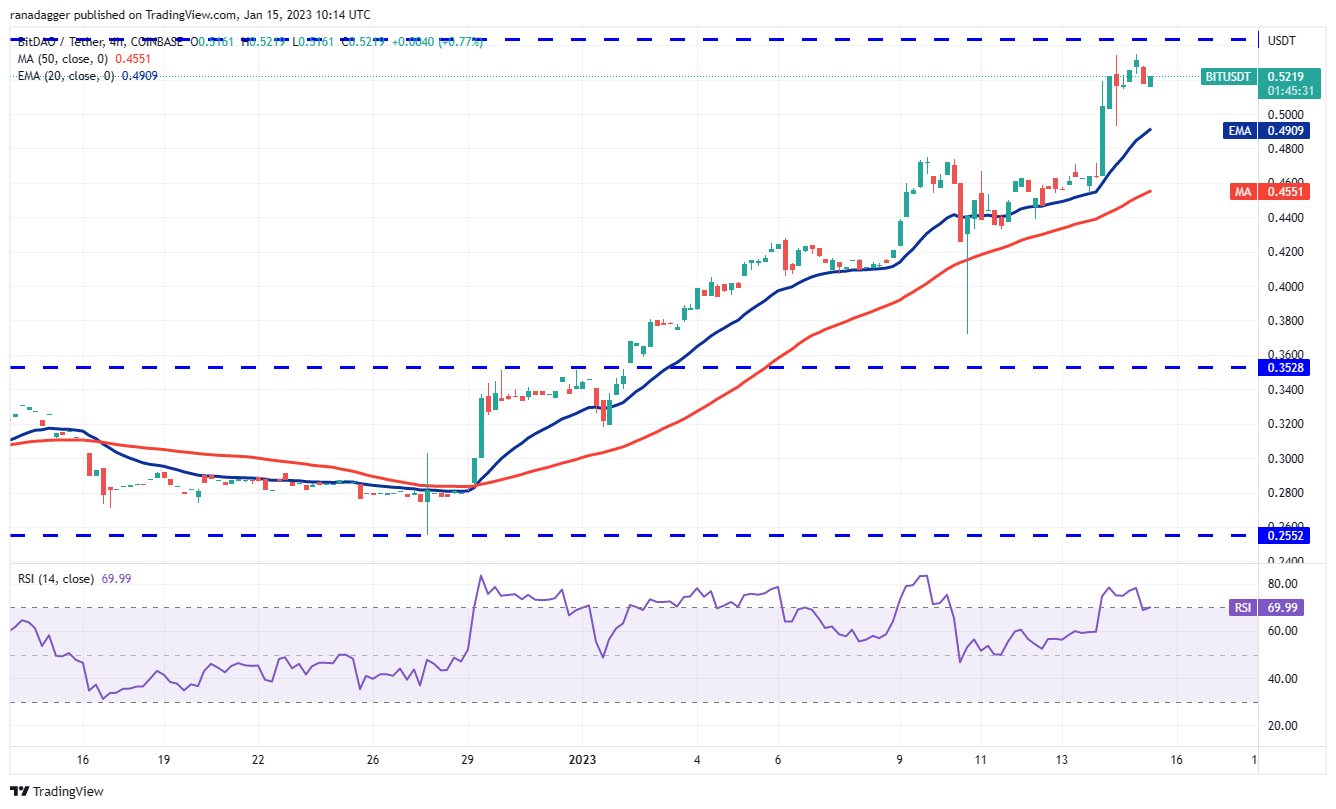 The 4-hour chart shows that the pair is facing resistance near $0.54 but the bulls are likely to defend the drop to the 20-EMA. A strong rebound off this level will suggest that bulls are buying on shallow declines. That could improve the prospects of a break above $0.54.

Alternatively, if the price turns down and breaks below the 20-EMA, several short-term traders may book profits. That could pull the pair to the 50-SMA. If this level also cracks, the pair could tumble to $0.41.

Fantom (FTM) broke above the downtrend line on Jan. 9, indicating a potential trend change. The breakout was followed by a sharp rally which pushed the RSI into deeply overbought levels. 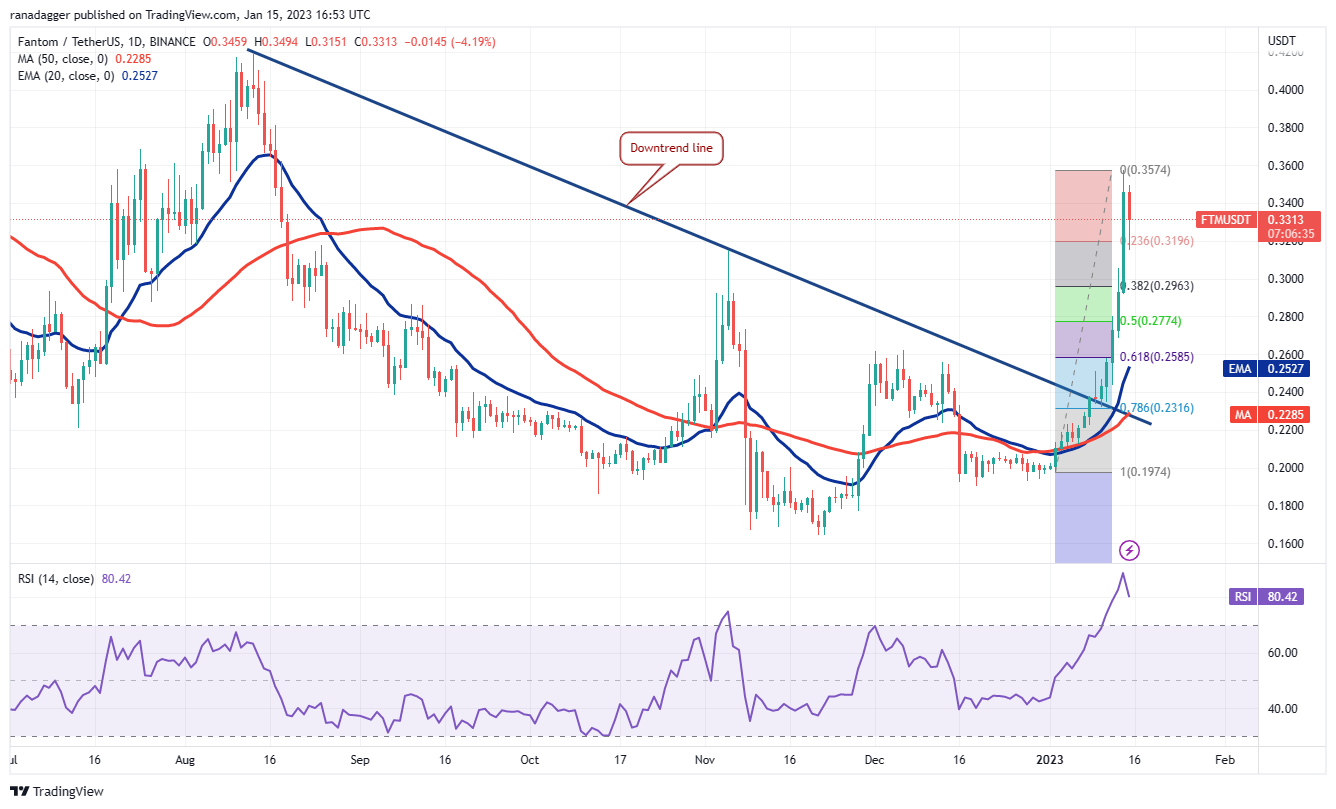 If the price turns up from this zone, it will suggest a change in sentiment from selling on rallies to buying on dips. The bulls will then try to resume the recovery and drive the pair above $0.36. If they do that, the pair could surge to $0.42.

Contrarily, a break and close below $0.28 could pull the pair down to the 61.8% retracement level of $0.26. A deeper fall could break the bullish momentum and increase the possibility of a range formation. 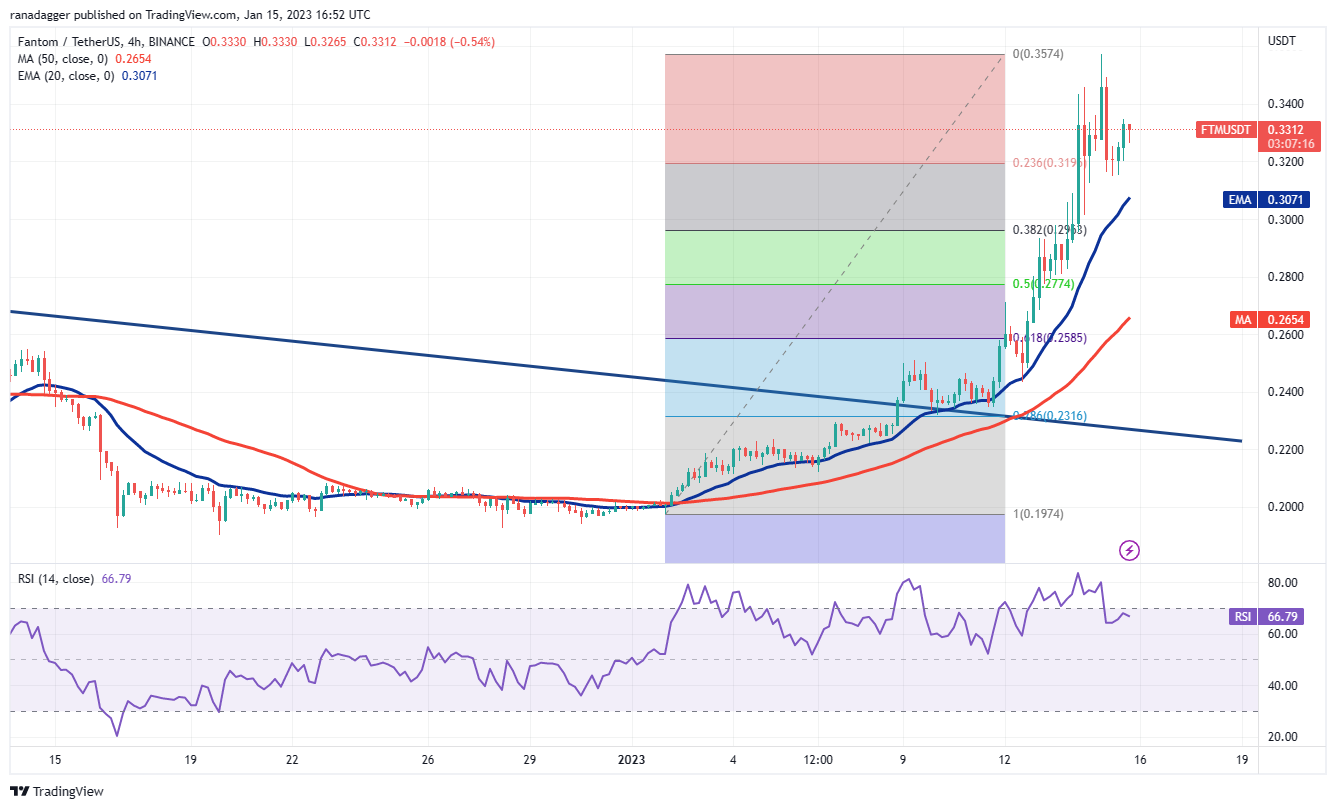 Both moving averages are sloping up and the RSI is in the positive territory, indicating an advantage to buyers. The pair could slide to the 20-EMA, which is likely to act as a strong support. If the price rebounds off this level, the bulls will try to resume the up-move.

On the contrary, if the price breaks below the 20-EMA, it will suggest that traders are aggressively booking profits after the recent rally. The pair could then extend its correction to the 50-SMA.