What will CBDCs mean as we head towards the next Bitcoin halving?

When Bitcoin was launched back in 2009, experts believed that it was launched to tackle the global financial crisis. The banking crisis was at the heart of it, and Satoshi’s vision may have been to decentralize what we know as money. Despite regulatory clampdown in the first 7 to 8 years of its existence, Bitcoin, today, is closer to realizing this vision as Central Banks across the world race to launch their own Central Bank Digital Currencies.

At the ECB forum last week, Christine Lagarde, President of the European Central Bank, commented that her “hunch” is that Europe will launch a digital Euro. However, she also said that while the European Central Bank is not “racing to be first,” she believes a decision will be taken to move forward with the project. The launch is tentatively in January and if approved, the launch of a CBDC will take 4 years.

What is interesting here is that the aforementioned timeline takes us to the fourth halving in 2024.

Only 2.5 million Bitcoins are left to mine and the fourth halving would induce a further shortage of supply. One of the most popular narratives for the present price rally is the “supply shortage” narrative. The fourth halving would drive this further. In fact, while current BTC reserves on spot exchanges are 15% lower when compared to pre-halving levels, the price is also nearly two times higher. 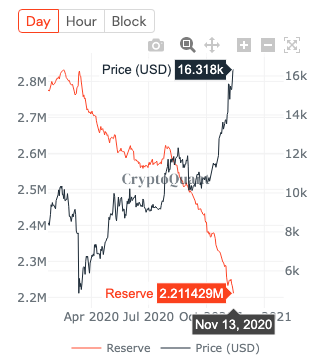 The race to issue centralized digital currencies in the backdrop of the fourth halving would be an exciting HODLing opportunity for the 86% HODLers sitting in on profit based on the on-chain analysis.

In the race to issue CBDCs, the United States is right alongside the European Central Bank. Back in October 2020, it was reported that Jerome H. Powell, Chair of the Board of Governors of the Federal Reserve System, said that “it is critical that we get it right as opposed to trying to be the first.”

This implies that the People’s Bank of China may eventually gain the first-mover advantage they are looking for. The United States and the European Union are clearly not in a rush to lead, however, the opposite of that is true for the PBoC. In fact, in their recently published policy document, the Chinese noted that pilot free trade zones would be Beijing and other cities.

What this means for Bitcoin is fairly predictable. East Asia has been at the center of Bitcoin’s ecosystem. Mining pools are concentrated in East Asia and the highest internal Bitcoin Transfers take place in the region, based on data from Chainalysis. The launch of CBDCs will lead to mining pools in other continents, apart from East Asia, gathering market share, thus changing the way BTC flows across regions.

Bitcoin flows from the rest of the world have fallen by 26.95% on average in the last 7 days and currently, the narrative driving Bitcoin’s price is the “store of value” and “alternative investment” narrative. A further drop in supply or transfers from East Asia may not have a significant impact on Bitcoin’s price in the long-run. However, it should be noted that the Open interest on derivatives exchanges and trade volume on spot exchanges like OKEx and Huobi may be impacted negatively. In fact, one can expect a redistribution in market share too.

In the race to issue CBDCs, PBoC continues to lead and the launch may end up easing concerns of retail traders by reducing volatility in spot markets worldwide, at least in the current phase of the market cycle.

South Korea to delay new tax regime on cryptocurrencies until 2022