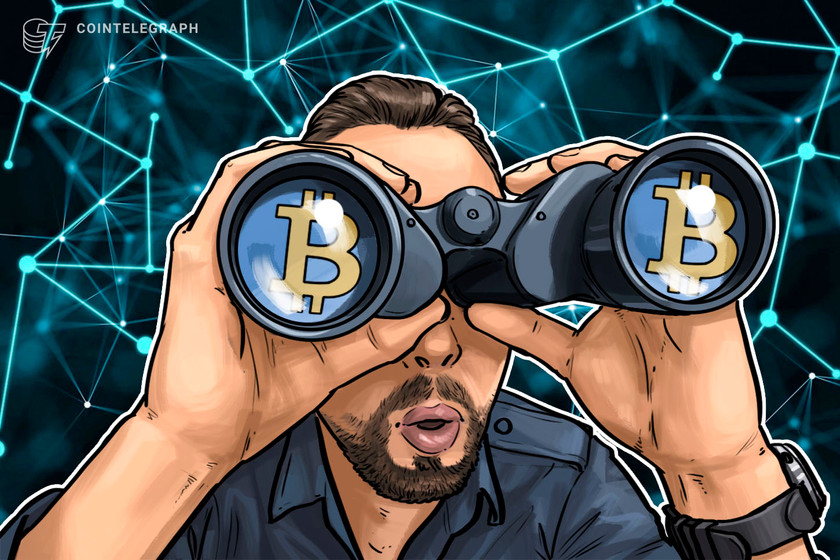 Bitcoin is leading a monster rally, but is BTC overdue for a sharp correction?

Bitcoin (BTC) is on the run, printing a new high with each day. After officially achieving a new all-time high by market cap, will Bitcoin finally break through that elusive $20K barrier once more? Or will we first see a major correction? 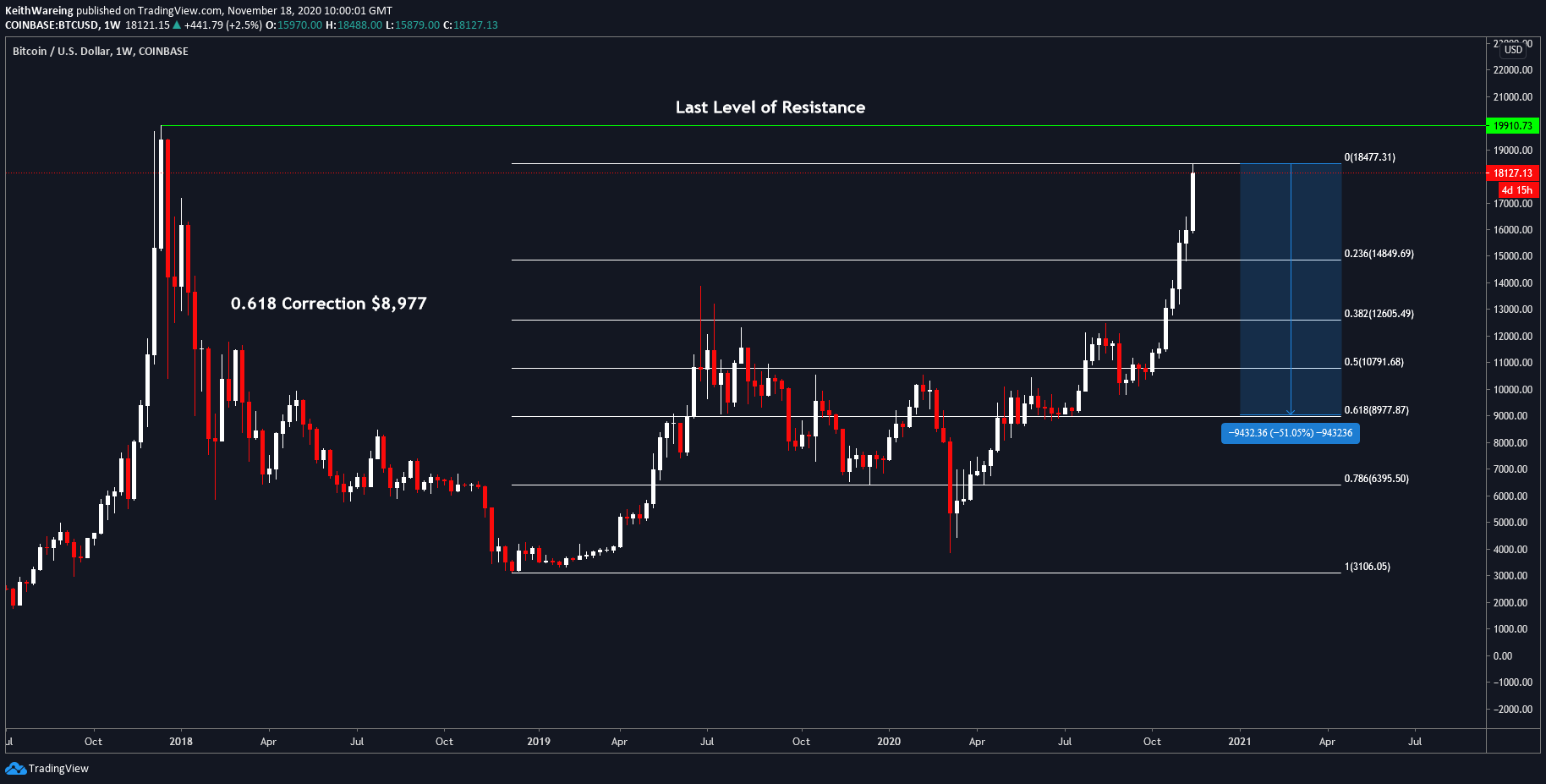 It’s hard to not get excited when looking at the weekly Bitcoin chart. In the past 30 days, Bitcoin has undergone a true parabolic run. But it is yet to reclaim its previous all-time high, which is just 10% away.

However, as the saying goes, what goes up, must come down, and right now the question on everyone's mind is “when correction?”

The doomsday scenario of the Fibonacci retracement levels paints a bleak picture of a 50% correction to the .618 of around $9,000. But in a post-halving bull run, is this something hodlers need to prepare themselves for? Or will previous resistance levels serve as the support on Bitcoin's stairway to the moon? 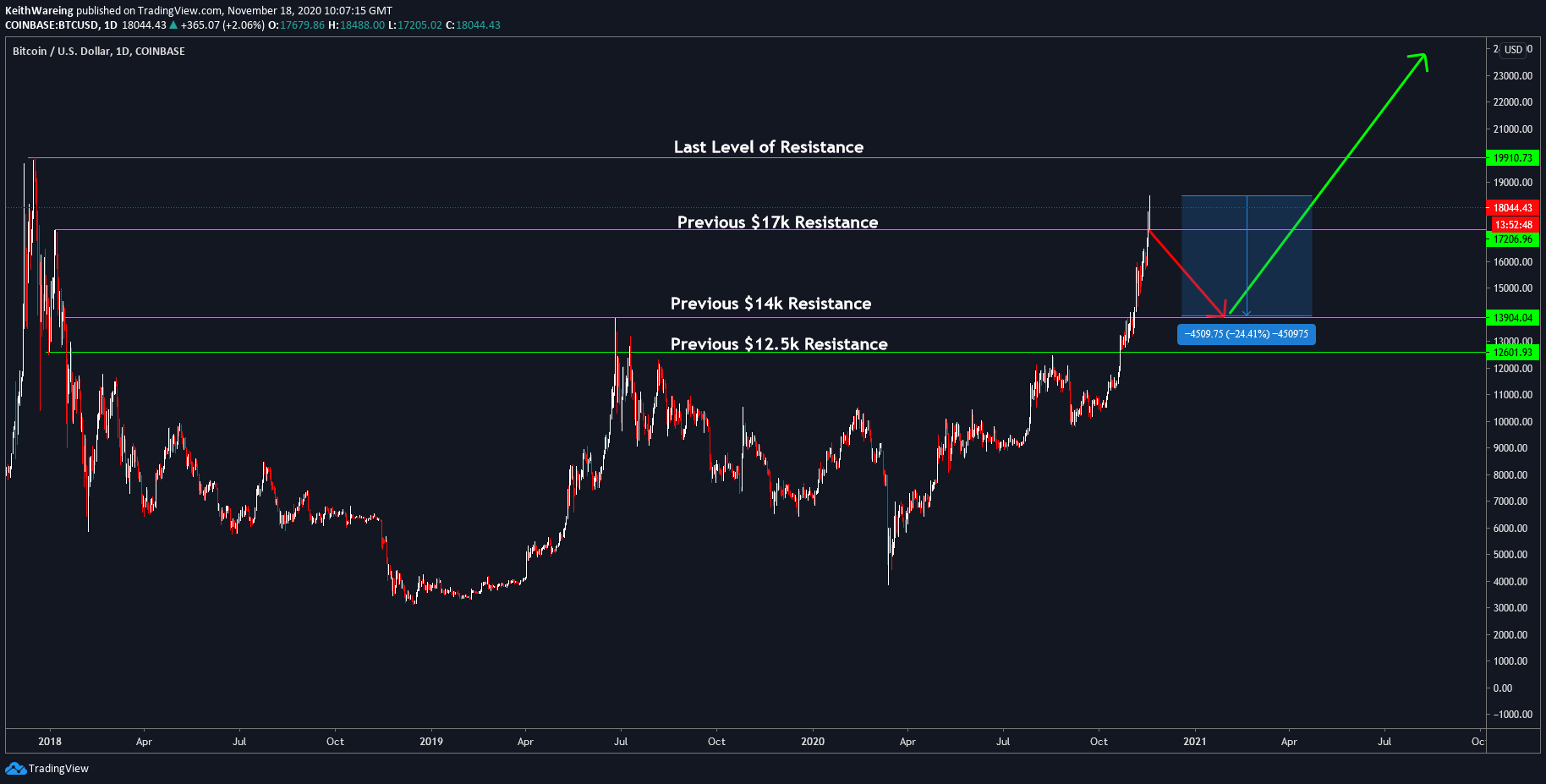 The daily Bitcoin chart hints at levels that people might be able to stomach a little better with the previous $17K resistance being the first level of support to hold, before potentially dropping to $14,000 and $12,500.

While this would be represent close to a 25% drop in the price of Bitcoin, it would represent a “healthy” pullback, allowing the king of cryptocurrencies to entice more retail buyers to step in and buy the dip, and potentially push the price above the key $20,000 level.

You might be screaming at the screen in disbelief right now, wondering how on earth this would be healthy. However, the fact remains that we must have a correction at some point, and the higher the price continues to climb, the steeper the correction will be.

In other words, it’s important for Bitcoin to find a new local bottom if BTC is to climb to new all-time highs. 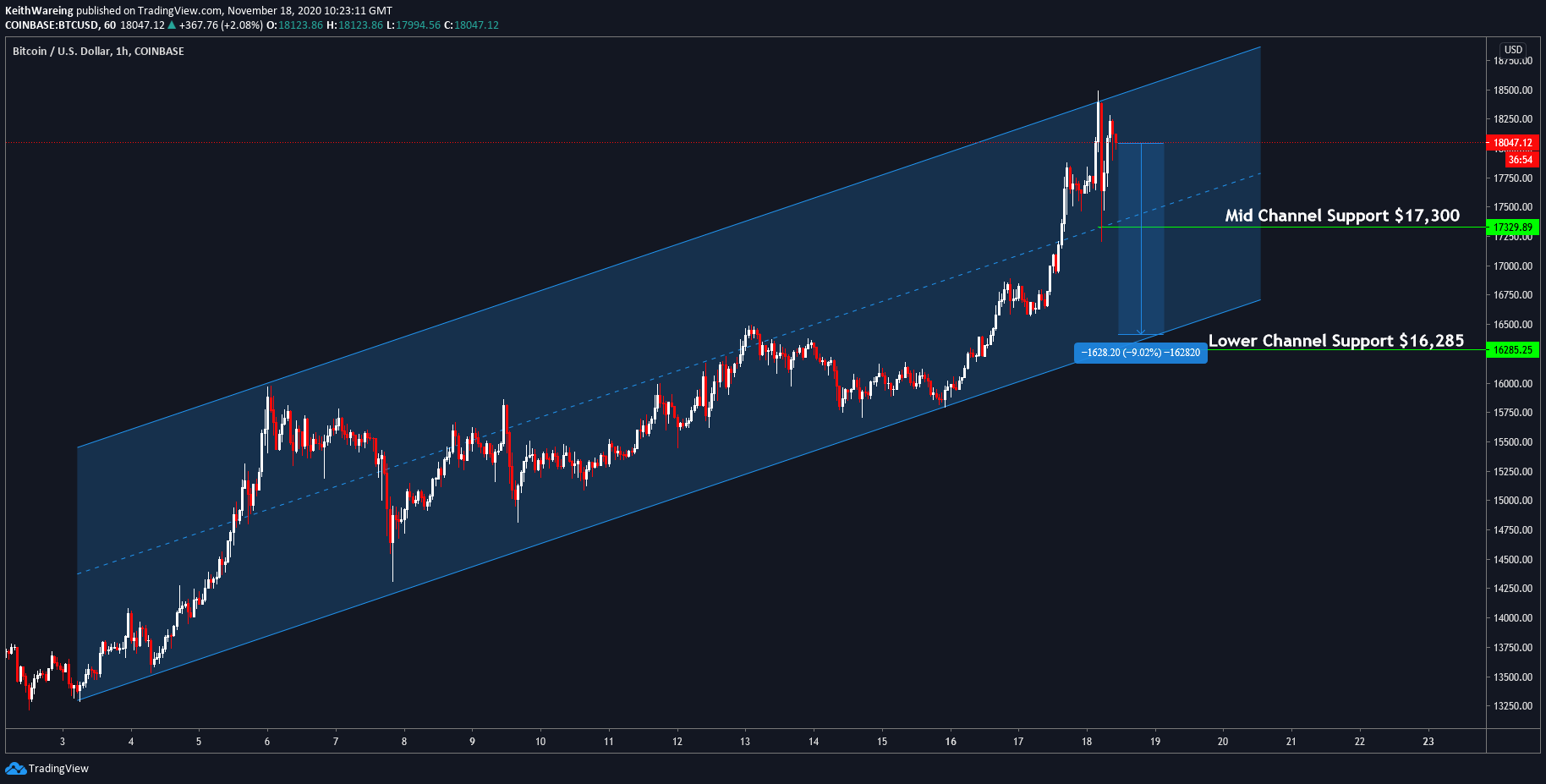 Zooming into BTC/USD on the hourly chart provides a different perspective, one that shows a structure that has been valid since the beginning of November. This shows that Bitcoin is currently overextended, and has already tapped the mid-channel support after hitting the top of the channel.

Should the structure remain intact, this view paints a downside of just 9% to the lower channel support of around $16,285. But for now, it seems the previous resistance of around $17,000 is holding quite well.

Should Bitcoin punch through the upper resistance of the channel around $19,000, then it could be that we already had our correction, which will catch those trying to short the local top off guard. 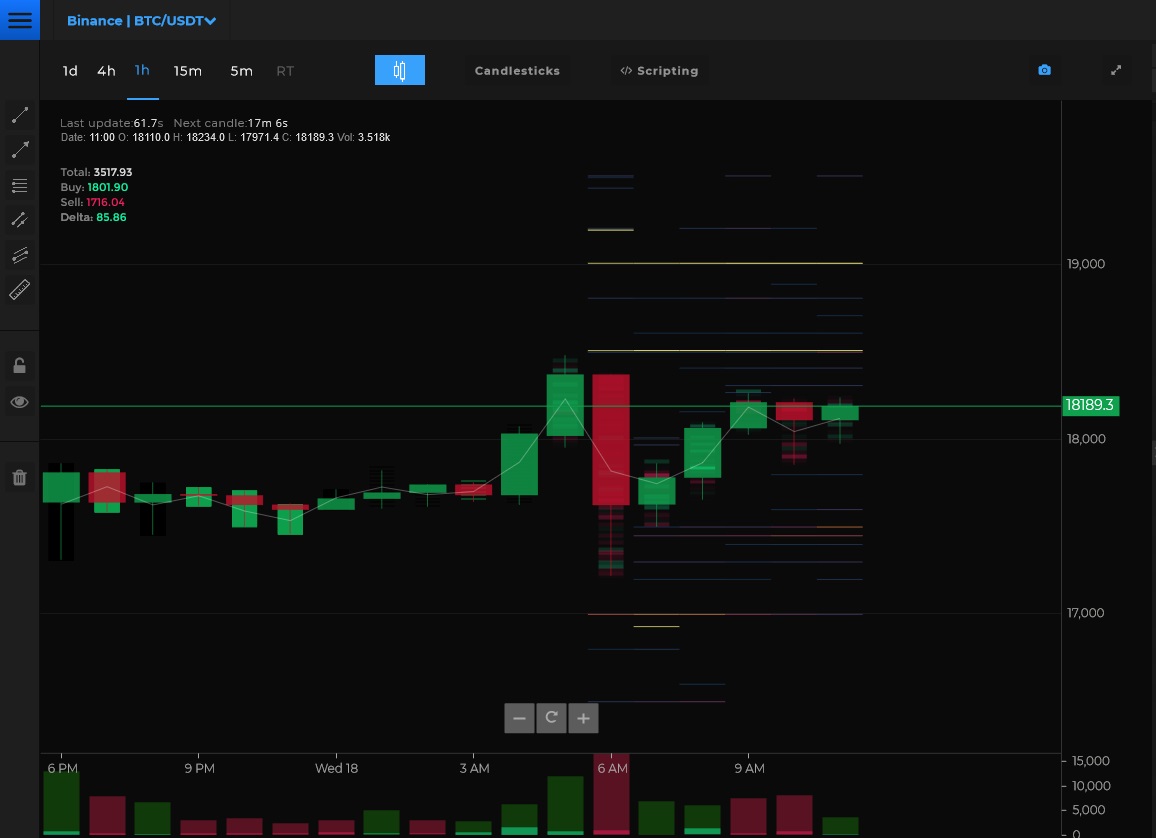 Heatmap data on Tensorcharts shows that there are sell walls at $18,500 and $19,000, indicating that whales are paying attention to the current ascending channel.

Interestingly there are multiple buy walls between $17,800 and $17,000 further signaling the upper part of the channel is the range that Bitcoin could expect to stay in over the coming days.

However, once $19K pops, there’s very little in the way of resistance before Bitcoin could go on to print new highs, and if you want to know what price level that is, I suggest purchasing a crystal ball.

Should the mid-channel support of $17,000 fail, the last level to hold sits around $16,285 for the current structure to become invalidated. From here, I would expect the next logical floor to be found around the $14,000 region.

Closing above $19,000 opens up a whole new chapter in the history of the price of Bitcoin. Attempting to forecast where the price will go at this stage would be nothing more than a guess. 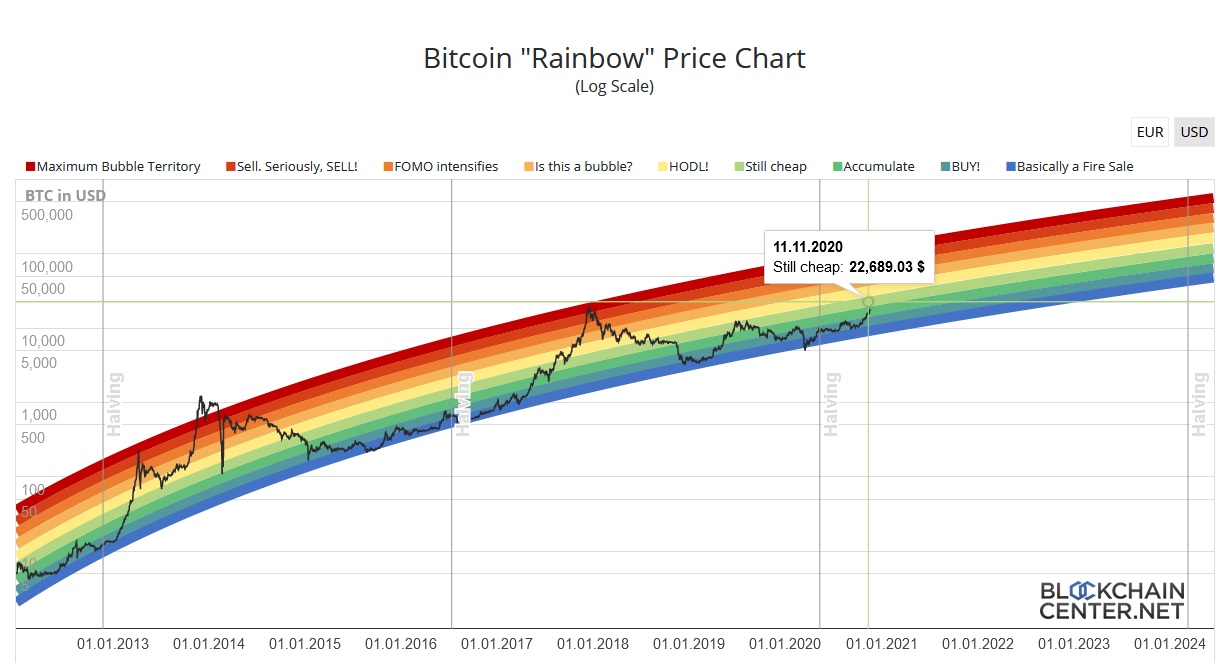 However, if you follow the Blockcenter rainbow chart, Bitcoin looks set to move from the “Accumulate” to “Still Cheap” color level, which puts Bitcoin at over $22,600 in the coming week.

For now, it’s all about price discovery, and as many of us have waited thre years for this moment, I suggest you sit back and enjoy the ride.

The views and opinions expressed here are solely those of @officiallykeith and do not necessarily reflect the views of Cointelegraph. Every investment and trading move involves risk. You should conduct your own research when making a decision.