US Bitcoin Holders Worry About Chinese Control of the Mining Network 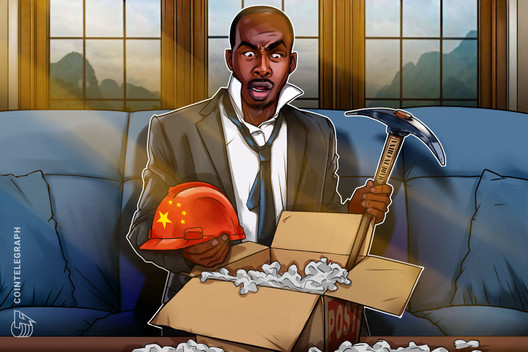 China has consolidated more than half of the world’s Bitcoin mining operations. What threats could the situation create?

Could China take over the Bitcoin (BTC) ecosystem? It’s a very real possibility, and it could happen very quickly because China controls more than half of the world’s Bitcoin mining operations — upward of 65% of the computing power to mine Bitcoin. No other country is anywhere near that number. Additionally, according to Genesis Mining’s recent “The State of Crypto Mining 2020” report, 60% of Bitcoin owners have a real concern about that Chinese majority and what it could mean for the stabilization of the cryptocurrency.

And they should be worried. China owning more than half of mining operations could result in a disruption to the system, instability to the Bitcoin blockchain or even a takeover of the entire system. Bitcoin was not built to be a controlled currency.

So, why is China’s vast mining network a concern? In order to understand the potential threat in China’s majority control, we need to look at a fundamental attribute of how the Bitcoin ecosystem works: decentralization.

Bitcoin works on a decentralized system

The founder of Bitcoin, Satoshi Nakamoto, had a vision for a currency that wouldn’t be subject to a third party such as a bank, but that could be democratically exchanged from individual to individual. The Bitcoin ecosystem works because of the community behind it: the miners who add blocks to the chain and the nodes that scan transactions to make sure they adhere to the Bitcoin protocol. There’s no one entity that governs Bitcoin — and that’s the point.

Even though Bitcoin has a strongly decentralized network, it could still be threatened. If someone were to control over 50% of the power used in mining operations, they could possibly disrupt the entire system through what’s called a 51% attack, or majority attack. A majority control would allow the attacker to alter transactions, double spend Bitcoin for their own gain or even block other miners from mining.

Which is why it’s concerning that Chinese mines are running 65% of the global hashing power used to mine Bitcoin. It’s certainly more than 51%.

Why China owns a large portion of computing power

It takes a lot of energy to mine Bitcoin, so it would make sense that miners would set up their rigs in places where energy and labor costs are cheap. Because China is a center of international trade, lead times and production costs for almost all goods are lower than in other countries, and this also holds true for mining farms and miners. But while a number of mining farms do run on sustainable resources such as hydroelectric power, many rely on coal to fuel their mining. While coal may be cheaper than other fuels such as gas and oil, it’s still more expensive than alternative options such as hydroelectric and wind power, and it’s unsustainable and detrimental to the environment.

Having 65% of the world’s mining located in China is a concern. Even though Chinese mines work independently, the majority of the power is now located in one country. And the fact that the Chinese government has control over all of its industries is also a concern. If the government decides that it wants to take over the Bitcoin ecosystem, it could leverage its power over the country’s mining companies and simply take over a majority of the computing power, executing a 51% attack. Suddenly, the decentralized system would be centralized under one country.

Uncertainty around China’s future in mining

While this could be a very real scenario if all the right pieces fell into place, it’s probably a long shot. New players in the mining market are increasingly setting up shop in the European Nordic states, Canada and the United States. The running costs there, which include cheaper energy options such as hydroelectric and wind power, along with a lack of government oversight that would let companies plan their strategies freely make those locations attractive for investors looking for a more sustainable opportunity.

Additionally, it’s unclear what China’s future will be with Bitcoin. It, along with all cryptocurrency, has been banned in the country for years. Though mining had been allowed to continue, the industry as a whole was on the chopping block last year. Even though the Chinese government suddenly announced at the end of 2019 a commitment to developing blockchain technology and allowed mines to continue to operate, the government still hasn’t reversed its ban on cryptocurrency. Even though China could take over Bitcoin, it just might not want to.

Still, China’s overwhelming number of miners, mining pools and companies is something the Bitcoin community needs to be aware of. At the same time, the community can ensure that decentralization continues within the ecosystem by making sure it’s keeping its own mining operations diversified. As I mentioned above, we’re seeing new mining farms cropping up in new geographies, which will continue to distribute resources and mining power across the globe.

It’s yet to be seen what the future of Chinese mining will be. But the Bitcoin community, which values transparency and democracy, will work to ensure that it remains open and available to all.

Philip Salter is the head of mining operations at Genesis Mining, the world’s largest cloud crypto mining operation, where he leads the software development, data engineering and research teams. Salter started his career as a software developer for BSI Business Systems Integration AG. Salter is an avid miner and crypto enthusiast based in Germany.