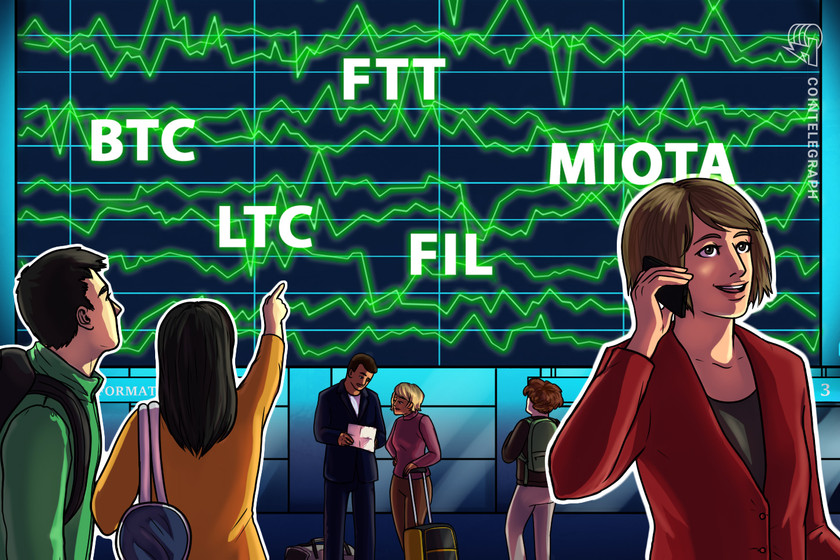 BTC bulls are still trying to flip $50,000 to support and if this occurs LTC, FIL, FTT and MIOTA could rally higher.

Bitcoin (BTC) is struggling to sustain above $50,500 but that has not stopped the altcoins from following in Ether's (ETH) footsteps after the top-ranked altcoin hit $4,000 on Sept. 3. This has pushed Ether’s market dominance above 20% while Bitcoin’s dominance has shrunk to 41.1%.

However, Bitcoin’s hesitation in the past few days has not altered the outlook of Bloomberg senior commodity strategist Mike McGlone who has retained a $100,000 target on Bitcoin and $5,000 on Ether. 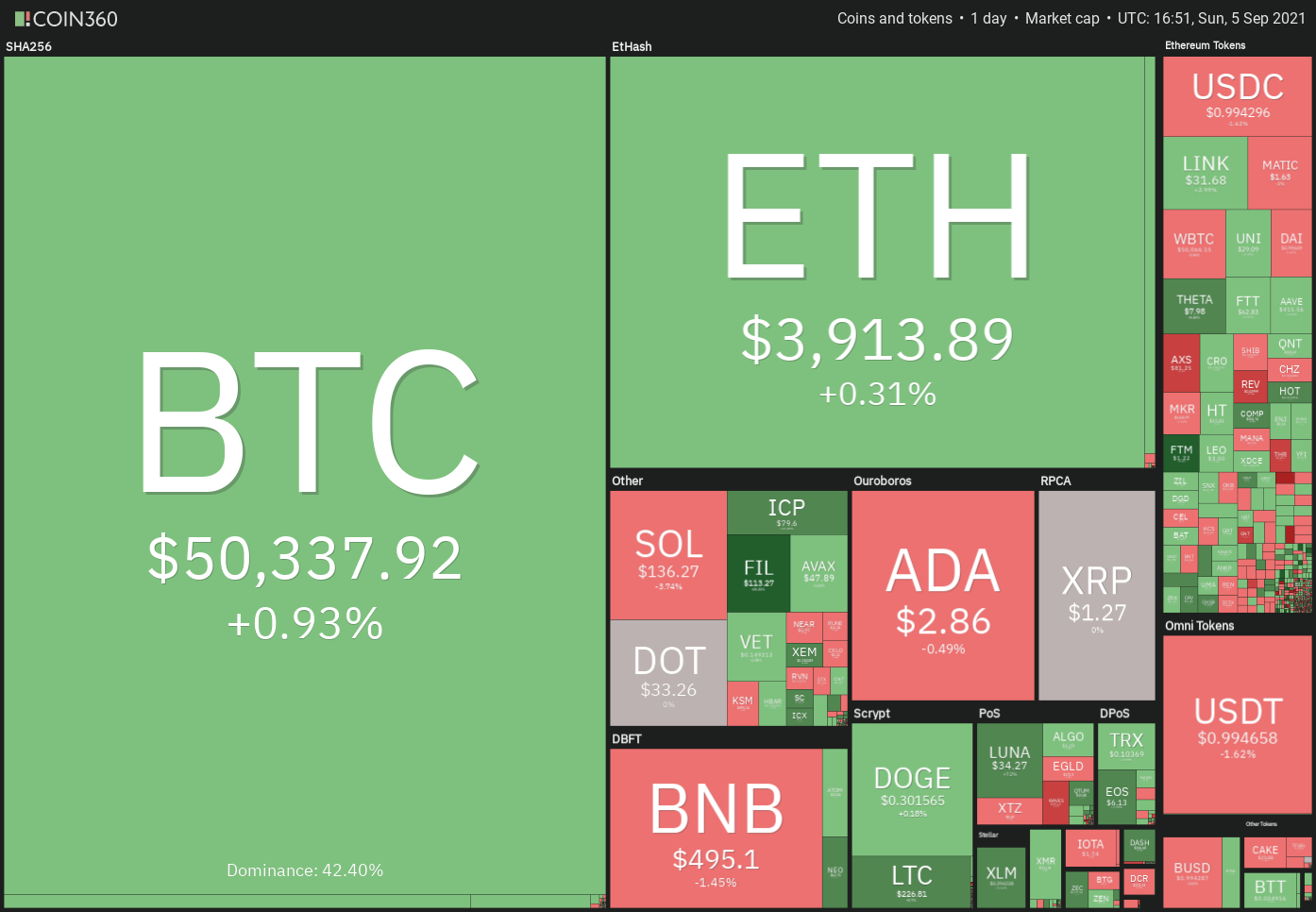 Apart from the top two cryptocurrencies, the nonfungible token (NFT) sector had been attracting investor’s attention since July. Cointelegraph contributor Jordan Finneseth recently suggested that the recent drop in transaction volumes and a few other reasons could be signaling a rotation of capital from NFTs to the decentralized finance sector.

Let’s study the charts of the top-5 cryptocurrencies that may outperform in the short term.

Bitcoin broke above the $50,500 resistance on Sep. 3 to hit $51,000 but the long wick on the day’s candlestick suggests a lack of buying at higher levels. That was followed by a Doji candlestick pattern on Sep. 4, indicating indecision among the bulls and the bears. 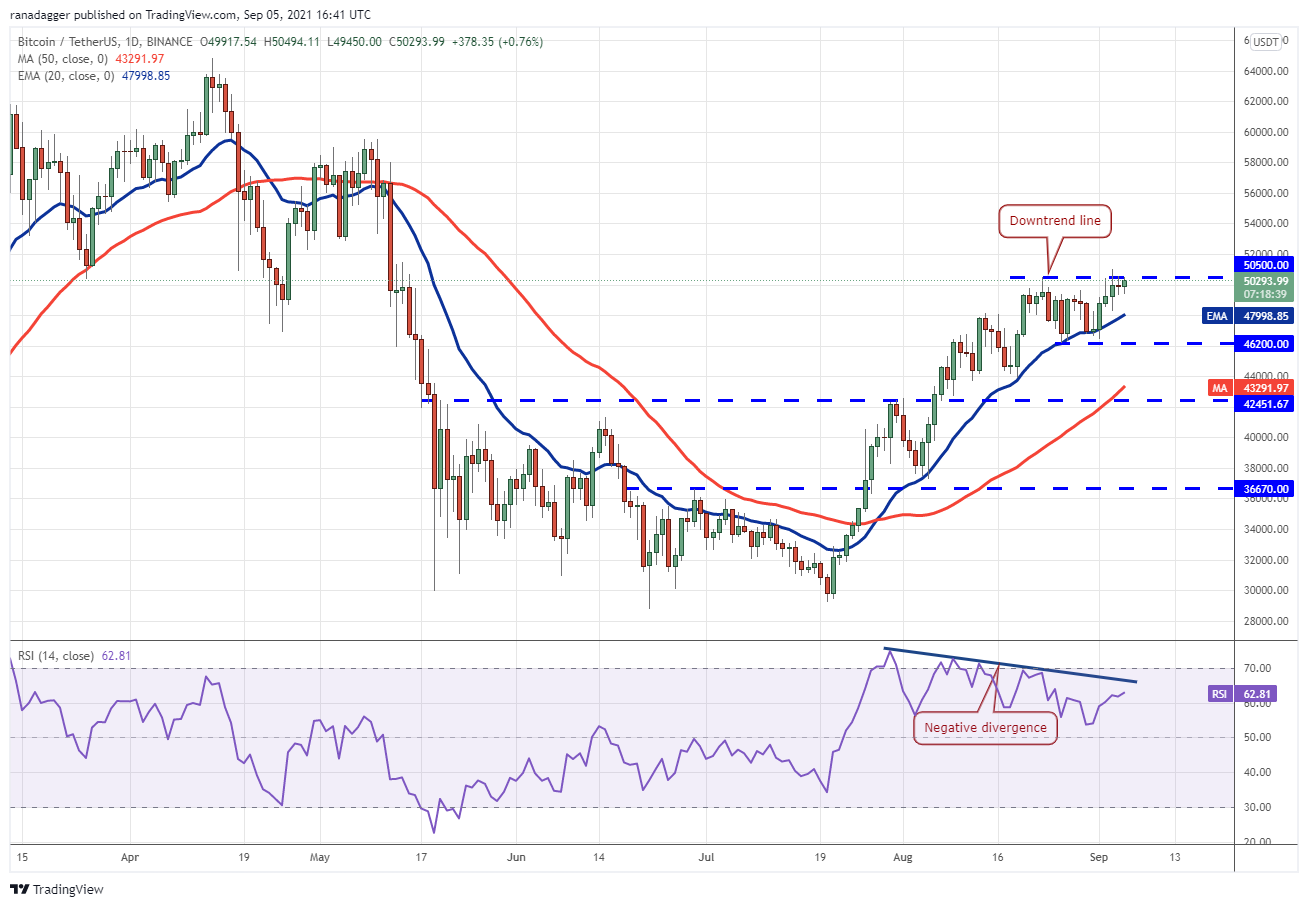 The negative divergence on the relative strength index (RSI) suggests that the bullish momentum may be weakening but the upsloping moving averages indicate that the path of least resistance is to the upside. 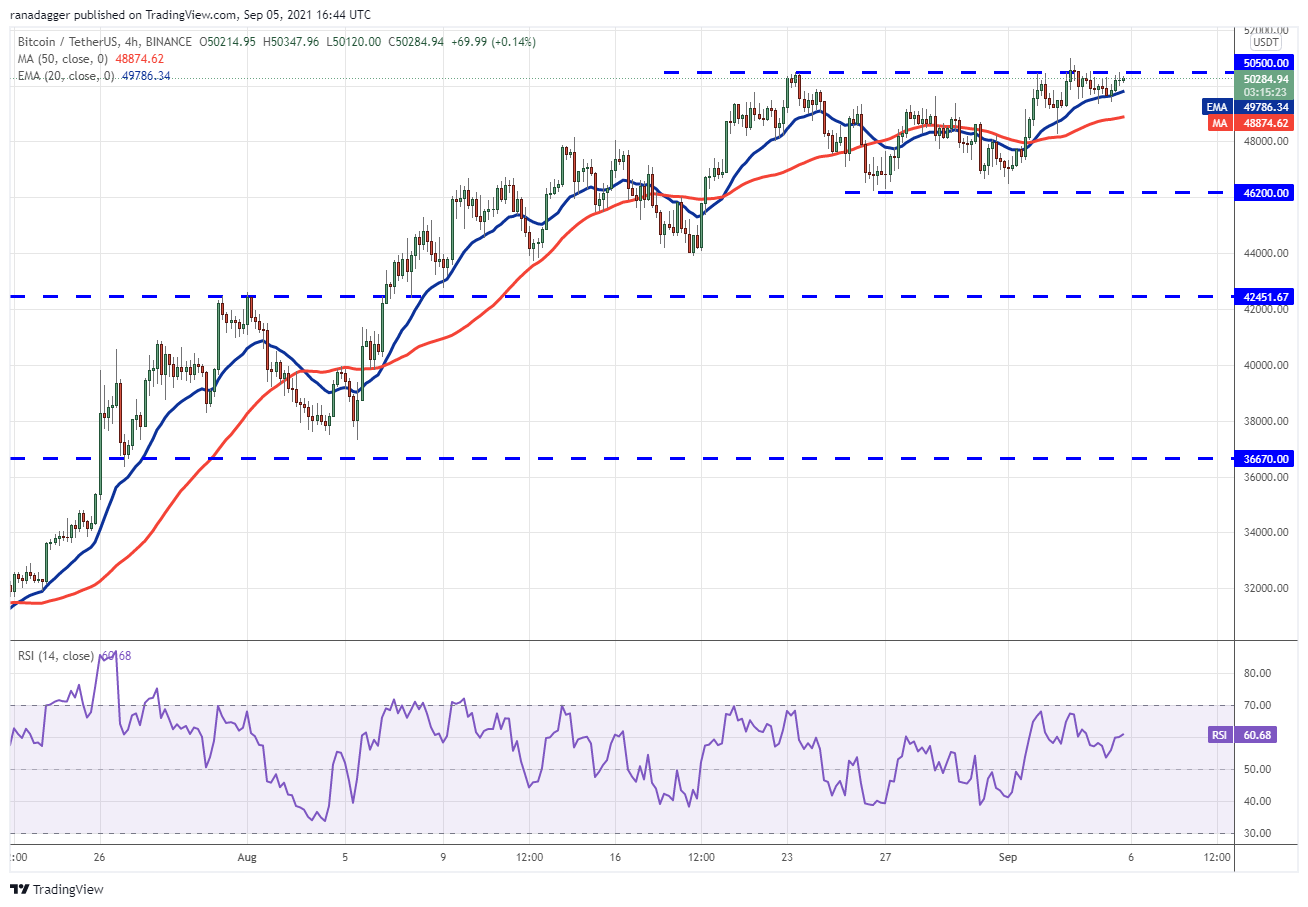 The price has been trading between the 20-EMA and the overhead zone. This tightening of the range is likely to result in a strong breakout soon. If buyers push the price above $51,000, the bullish momentum could pick, signaling the resumption of the uptrend.

Alternatively, if the price slides below the moving averages, it will suggest that bears are aggressively defending the overhead resistance zone. That could pull the price down to $46,200. A bounce off this support could keep the pair range-bound for some more time but a break below it will indicate that bulls may be losing their grip.

The bulls are attempting to push and sustain Litecoin (LTC) above the overhead resistance at $225.30. If they succeed, it will complete a rounding bottom pattern that may start a new uptrend. 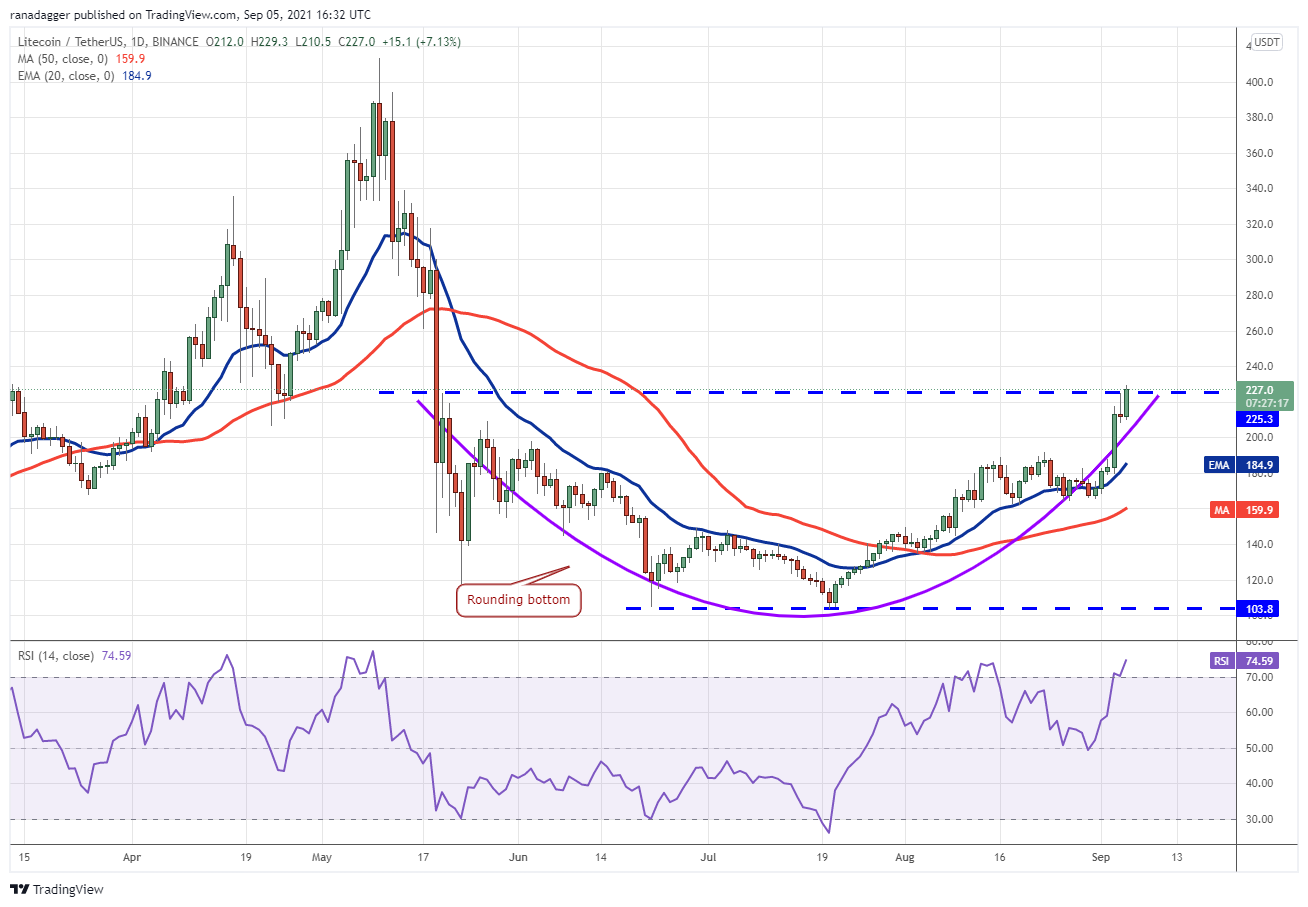 The long wick on the Sep. 4 candlestick showed selling near the overhead resistance but the positive sign is that bulls did not cede much ground. They are again attempting to overcome the overhead hurdle.

This bullish view will invalidate if the price turns down from the current level and breaks below the 20-day EMA. 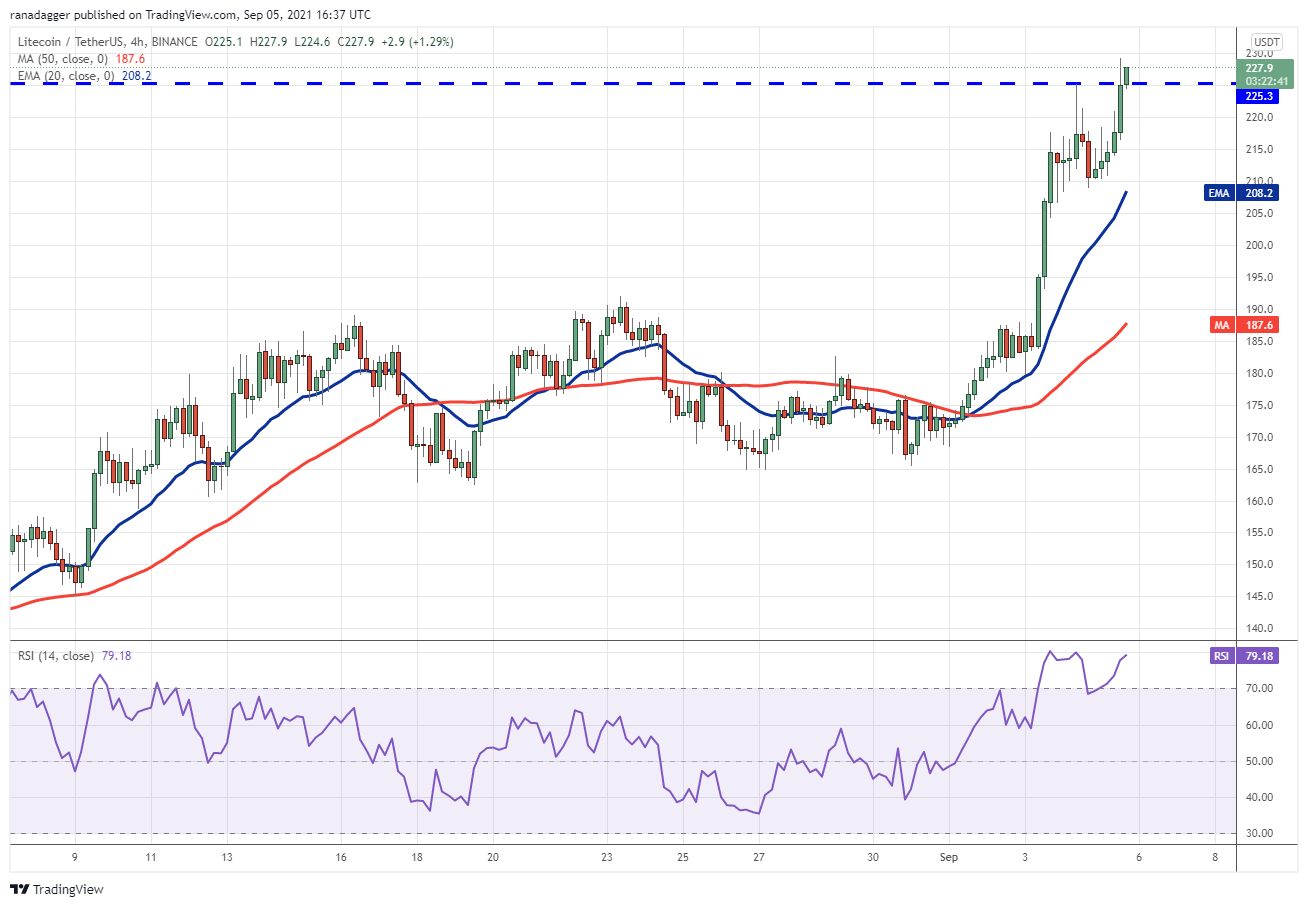 The 4-hour chart shows the bears tried to stall the up-move at the overhead resistance at $225.30 but the bulls did not give up much ground. This suggests that buyers continue to accumulate on any minor dip.

Both moving averages are sloping up and the RSI is in the overbought zone, indicating that bulls are in command. A break and close above $225.30 could open the doors for a rally to $250.40. Conversely, a break and close below the 20-EMA will be the first sign of weakness.

Filecoin’s FIL token has broken above the overhead resistance at $98 today. This completes a rounding bottom pattern, suggesting the start of a new uptrend. The bottoming formation has a pattern target at $156. 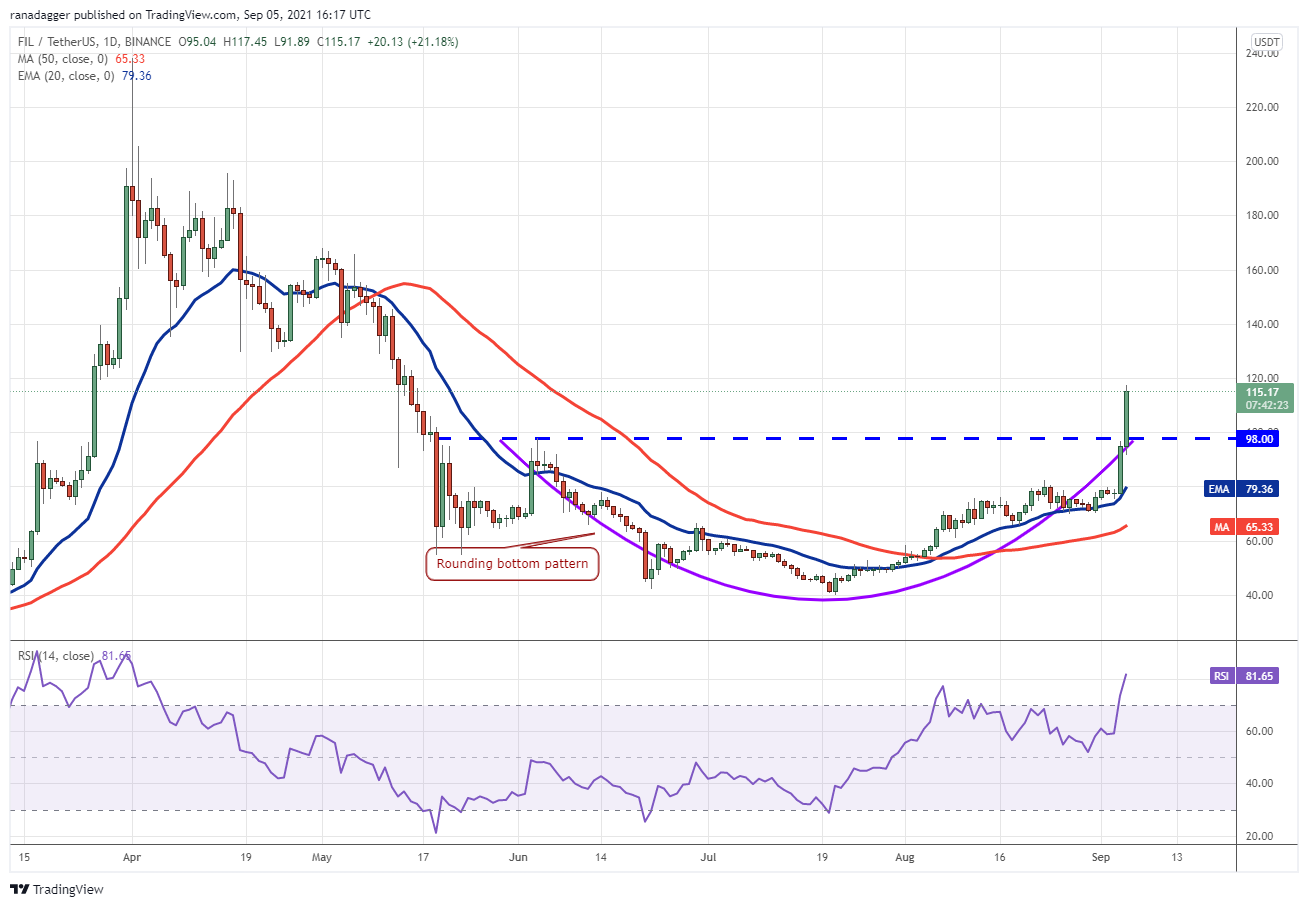 The 20-day EMA ($79) has turned up and the RSI has soared above 81, indicating a possible trend change. Usually, the breakout from a major pattern retests the breakout level. In this case, the price may drop to $98.

If bulls flip the $98 level into support, the FIL/USDT pair could resume its uptrend. On the contrary, if bears pull and sustain the price below $98, it will suggest that the recent breakout was a bull trap. The pair may then drop to the 20-day EMA.

If the price rebounds off this support, the bulls may once again try to propel the price above the overhead resistance and resume the uptrend. The bears will have to sink the price below the 20-day EMA to gain the upper hand. 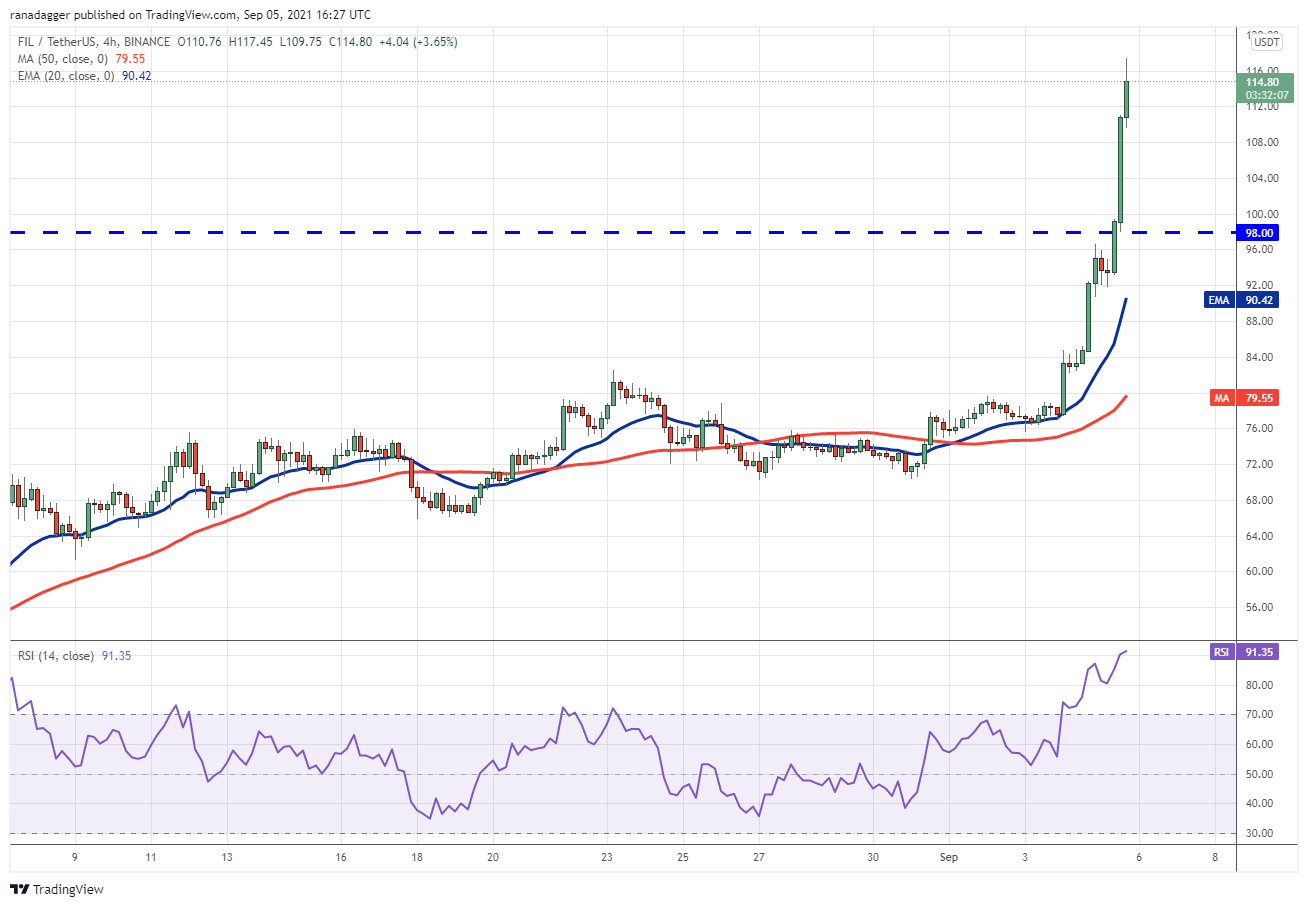 The 4-hour chart shows a strong momentum in favor of buyers. That has pushed the RSI deep into the overbought territory, indicating the possibility of a minor correction or consolidation in the short term.

If bulls do not give up much ground, it will suggest that traders are not booking profits as they anticipate another leg higher. That will increase the likelihood of the resumption of the uptrend.

However, the bears are likely to have other plans. They will try to pull the price back below $98 and trap the aggressive bulls. 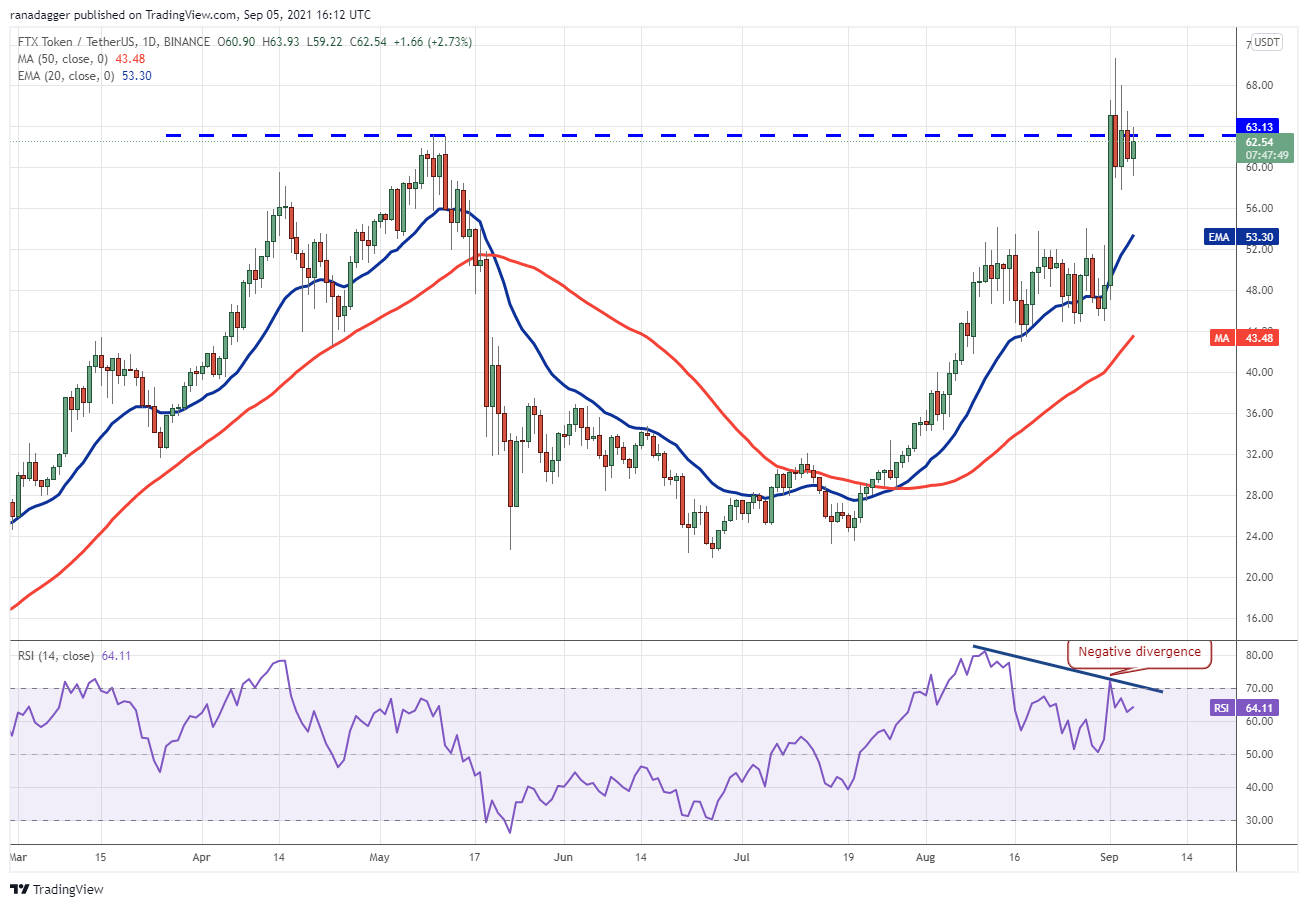 This suggests that bears have not yet given up and are attempting to stall the up-move. The negative divergence on the RSI suggests that the bullish momentum may be slowing down.

If bears pull the price below $57.93, the FTT/USDT pair could drop to the 20-day EMA ($53). A strong bounce off this level will suggest that bulls are accumulating on dips. The buyers will then again attempt to push the price above the $63.13 to $70.72 resistance zone. If they manage to do that, the pair could rally to $84.

This positive view will invalidate if the price breaks below the 20-day EMA. Such a move will suggest that the recent breakout above $63.13 was a bull trap. 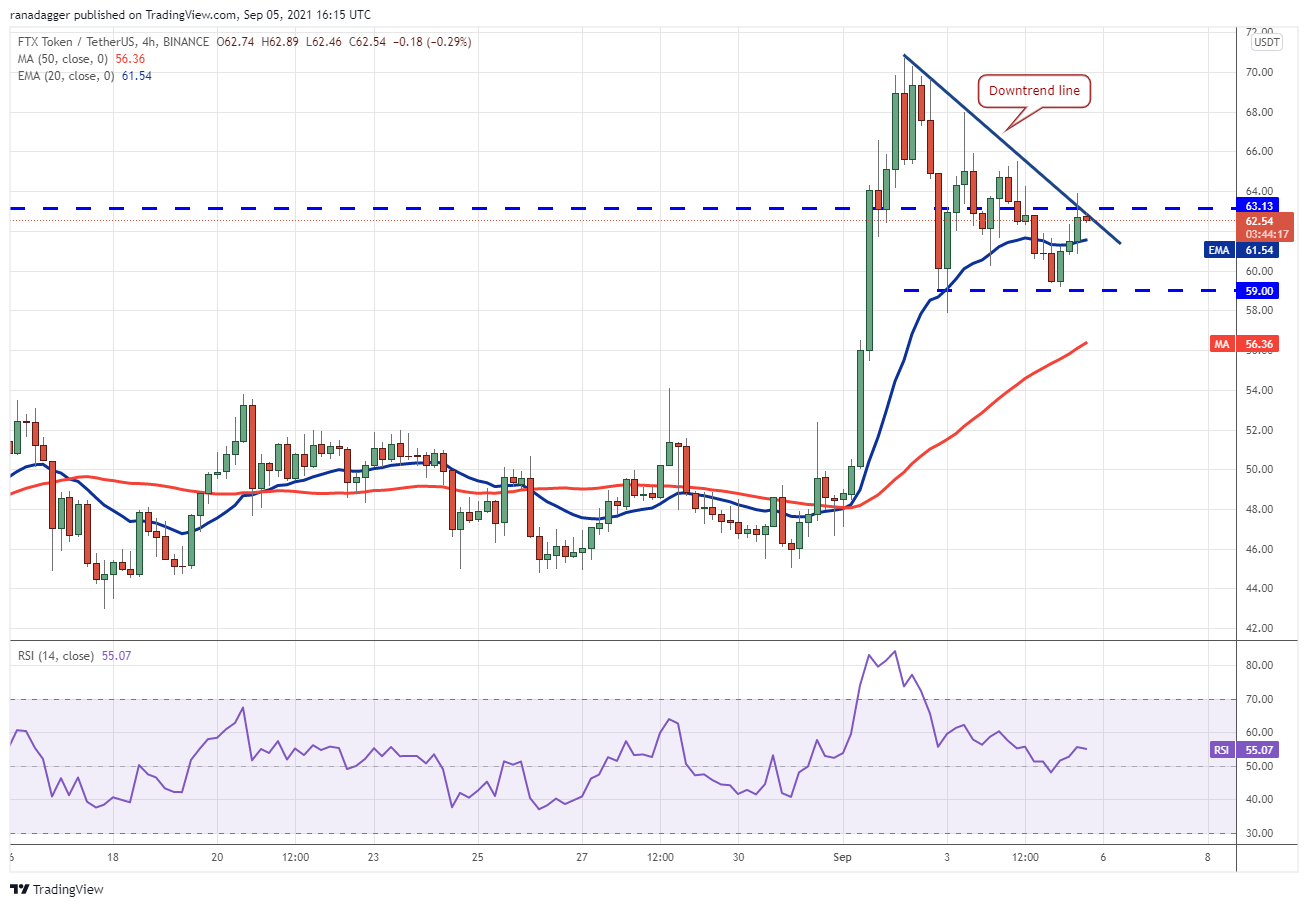 The 4-hour chart shows the formation of a descending triangle pattern, which will complete on a break and close below $59. This bearish setup has a pattern target at $47.50. The flat 20-EMA and the RSI just above the midpoint do not give a clear advantage either to the bulls or the bears.

If buyers drive and sustain the price above the downtrend line, it will invalidate the bearish pattern. The price may then rally to $65 and later to $70.72. A breakout and close above this level could start the next leg of the uptrend. 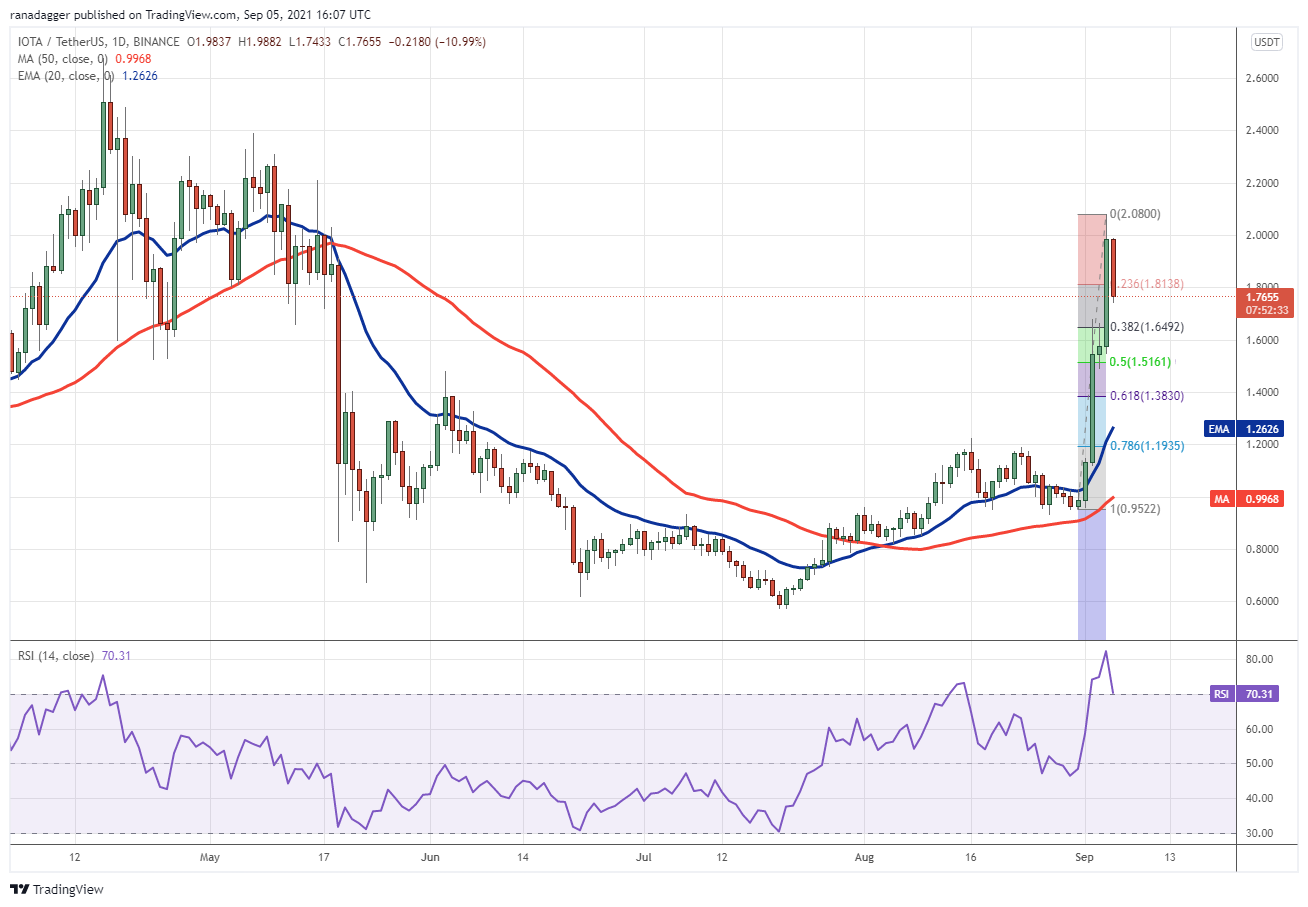 The MIOTA/USDT pair is currently witnessing profit-booking and it may drop to the first support at the 38.2% Fibonacci retracement level at $1.64. A strong rebound off this level will suggest that traders are buying on minor dips.

The bulls will then make one more attempt to push the price above $2.08. If they succeed, the pair could pick up momentum and rally toward $2.40 and then $2.67. 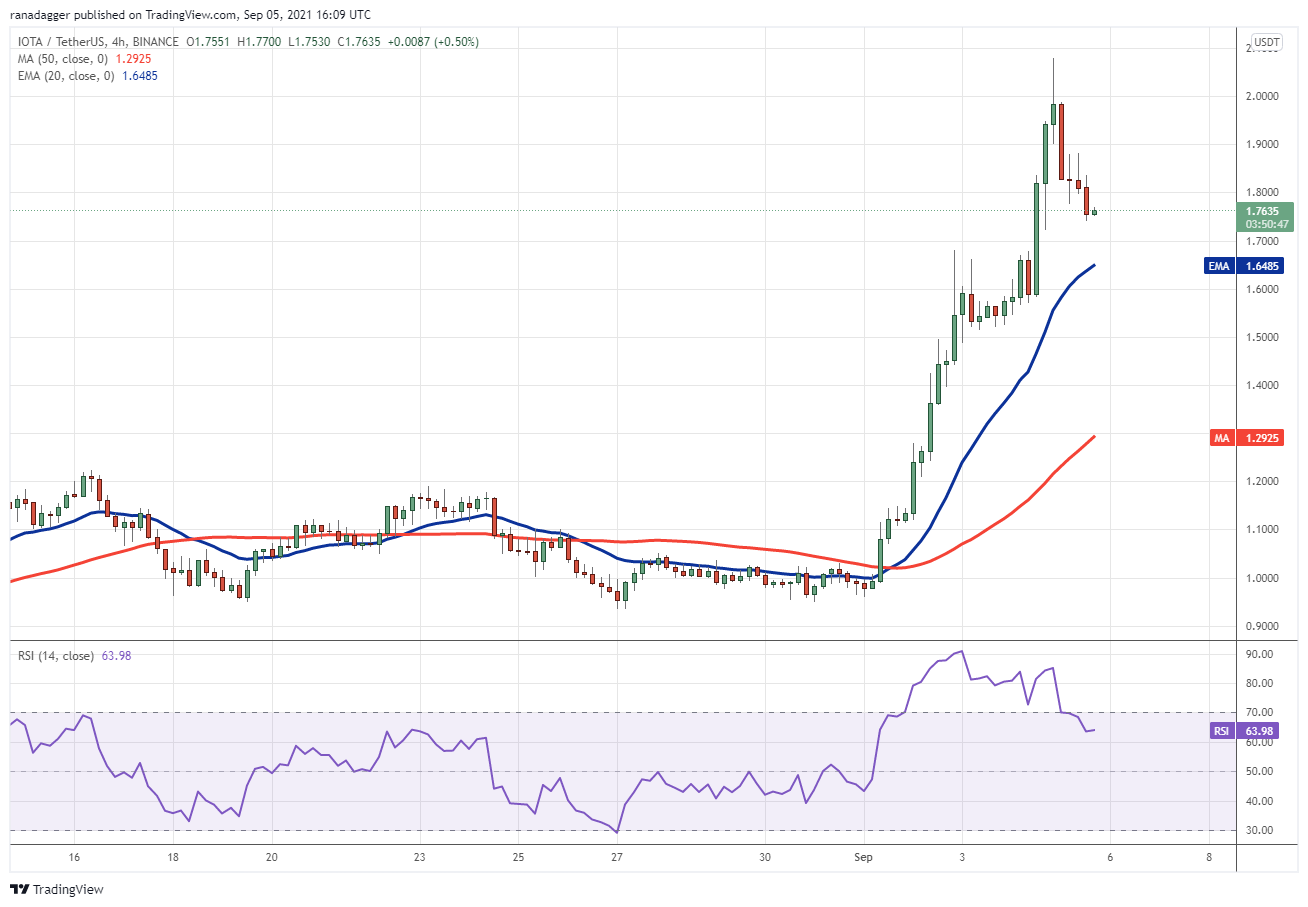 The long wick on the 4-hour chart above the psychological barrier at $2 shows that bears are attempting to defend this level. Profit-booking may pull the price down to the 20-EMA, which is likely to act as a strong support.

If the price rebounds off the 20-EMA with strength, it will suggest that the sentiment remains positive and bulls are accumulating on dips. The buyers will then try to resume the uptrend by thrusting the price above $2.08.

A break and close below the 20-EMA will be the first sign of weakness. That may open the doors for a further decline to $1.50.