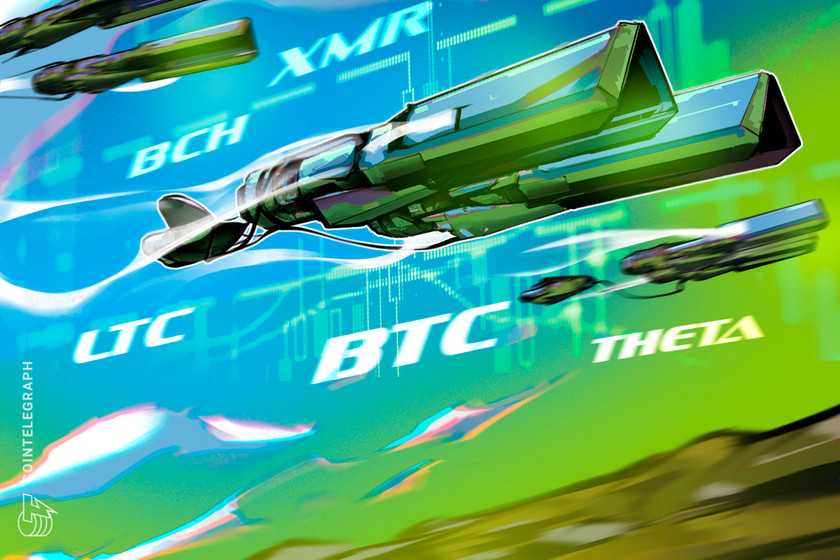 If Bitcoin seeing a minor correction or consolidation in the next few days could benefit select altcoins.

The supply and demand equation determines the price of an asset. In the past few months, the uptick in institutional demand for Bitcoin (BTC) has resulted in a strong bull run. This uptrend may continue until demand exceeds supply.

On-chain data shows two withdrawals of more than 12,000 Bitcoin each from Coinbase Pro this week, which is just short of the 28,000 Bitcoin mined in November. This suggests that demand from institutional investors remains intact even after Bitcoin’s recent rally because they are bullish in the long term.

Meanwhile, Mexico’s second richest man, Ricardo Salinas Pliego, said in an interview with Cointelegraph that Bitcoin has been his “best investment ever.” Salinas has about 10% of his liquid portfolio in Bitcoin and he is in no hurry to sell as he wants to “sit around for another five or ten years." 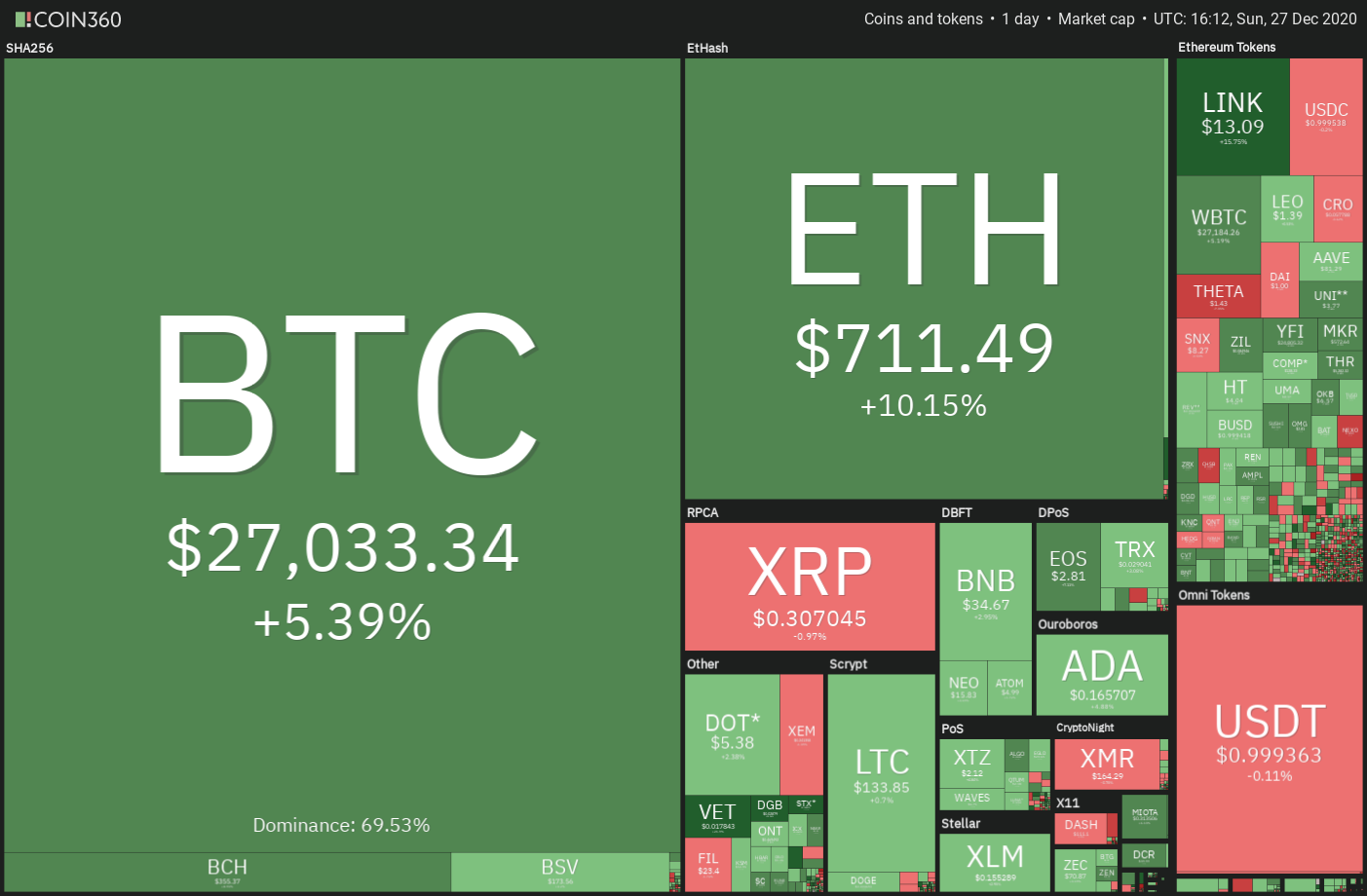 The strong demand and HODLing by institutional investors has propelled Bitcoin’s market capitalization to above $500 billion for the first time. It has also boosted Bitcoin’s market dominance to above 70.5%, which suggests that the inflow of money has largely been into Bitcoin.

However, at some point, fresh money will stop flowing into Bitcoin and that could result in a correction or consolidation. Traders may then divert their attention to select altcoins, which could pick up momentum.

Let’s look at the charts of top-five cryptocurrencies that could rally in the next few days. 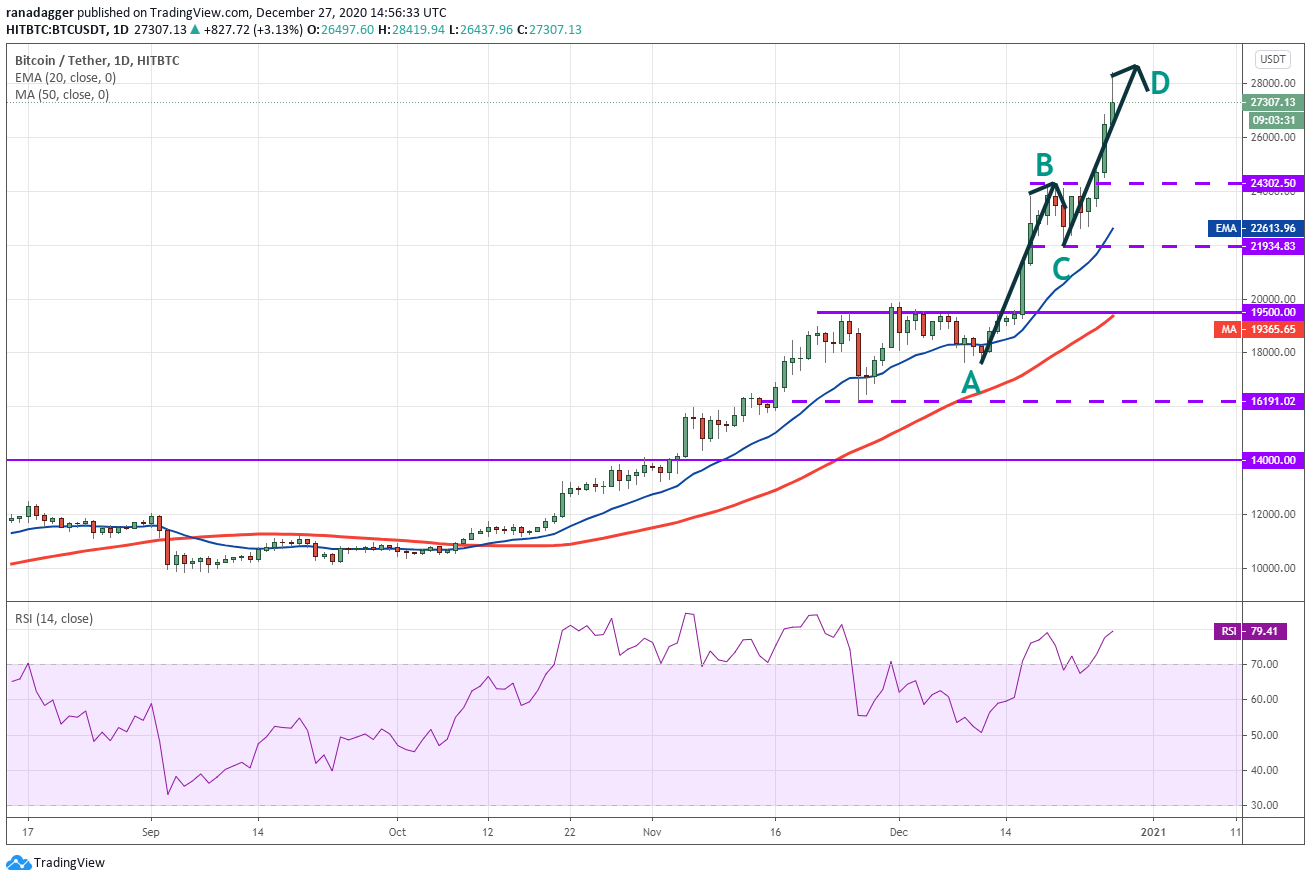 The BTC/USD pair’s incessant rise has sucked in traders who had been waiting on the sidelines for a dip to enter. Institutional investors, momentum traders, and speculators have also joined the party that has kept the uptrend intact.

However, the current pace of rise is not sustainable. The long wick on today’s candlestick suggests profit booking at higher levels. Even if the uptrend continues, the pair may again face selling near the $30,000 mark.

If the uptrend stalls, the short-term traders may rush to the exit and that could pull the price back to the 20-day exponential moving average ($22,613). If this support holds, the pair could again attempt to resume the uptrend.

On the other hand, a break below the 20-day EMA could drag the price to the critical support at $20,000. Therefore, traders may avoid chasing prices higher. 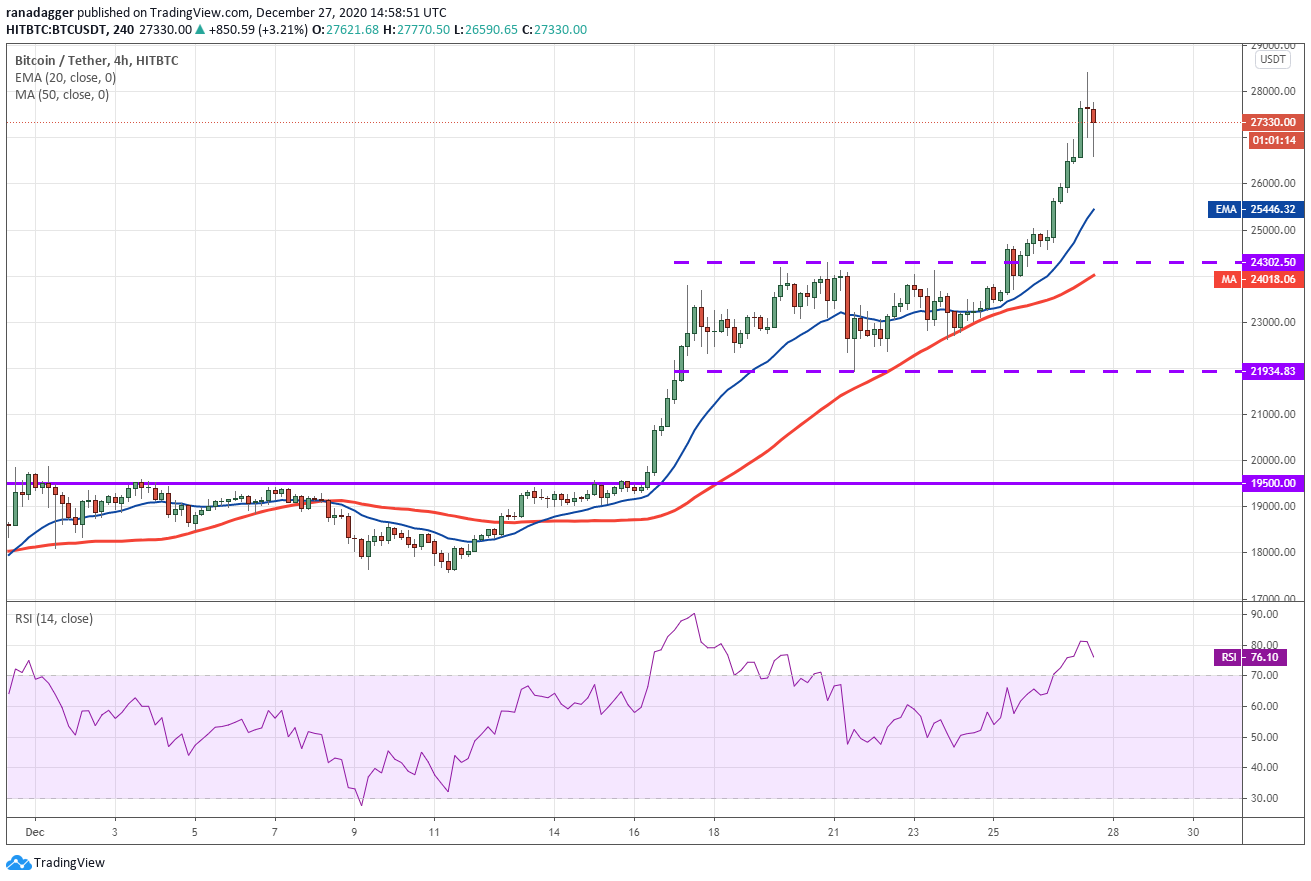 The 4-hour chart shows the formation of a Doji candlestick pattern, which suggests indecision among the bulls and the bears. Although the uncertainty resolved to the downside, the long tail on the candlestick shows buying at lower levels. This suggests traders are purchasing on every minor dip.

However, if the bulls fail to propel the price above $28,419.94, the selling may continue and that could pull the price down to the 20-EMA at $25,446. The overbought levels on the relative strength index also point to a possible correction.

In a strong uptrend, traders usually buy the dips to the 20-day EMA ($105) and that is what happened on Dec. 23. Litecoin (LTC) rebounded sharply on Dec. 24 and the momentum picked up after the bulls pushed the price above the $118.64 to $124.12 overhead resistance zone. 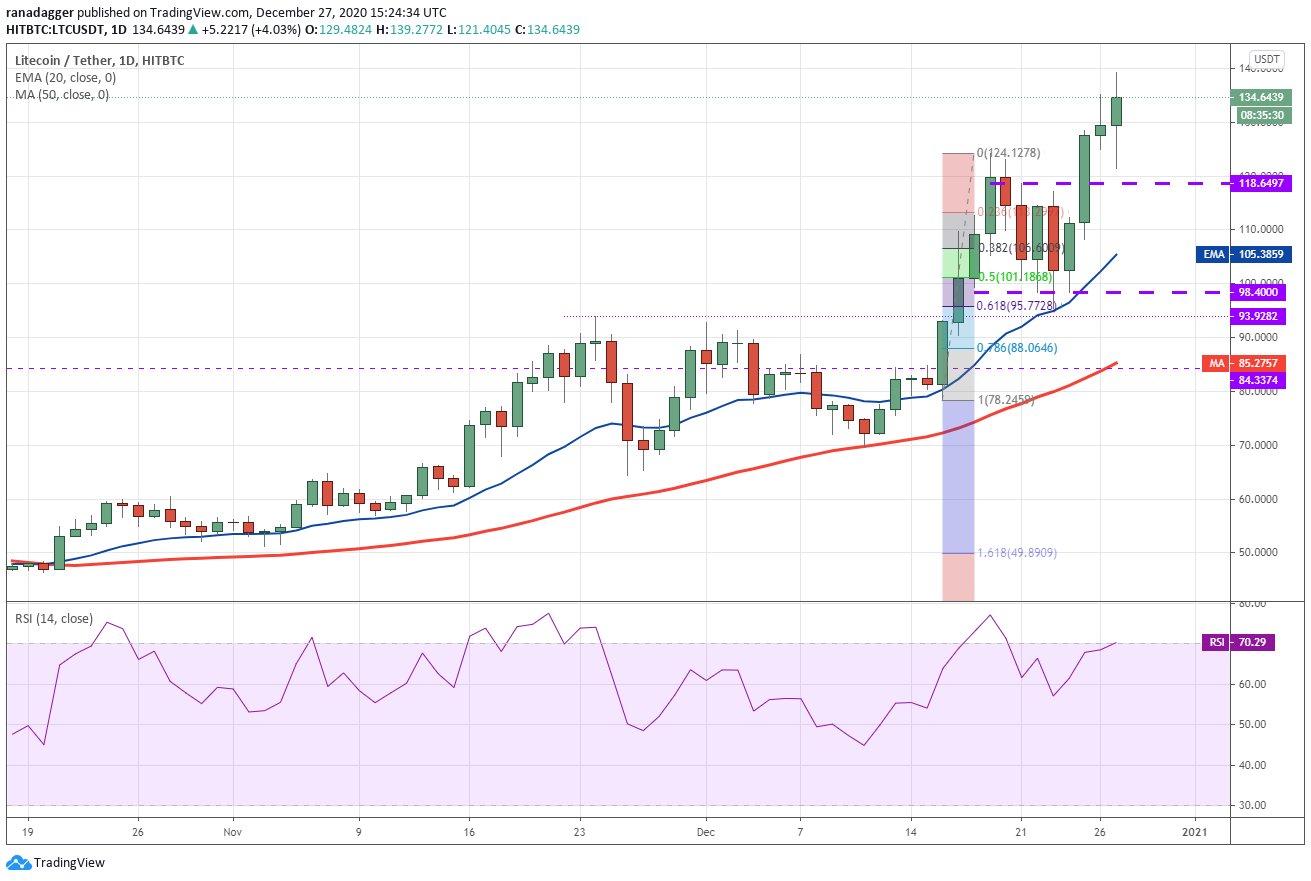 The immediate target is $145 but if the bulls do not allow the price to drop and sustain below $124.1278, the rally may extend to $180. The rising moving averages and the RSI in the overbought zone suggest bulls are in control.

This bullish view will be invalidated if the LTC/USD pair turns around from the current levels or the overhead resistance and drops below the 20-day EMA. Such a move will suggest that traders are not buying the dips. 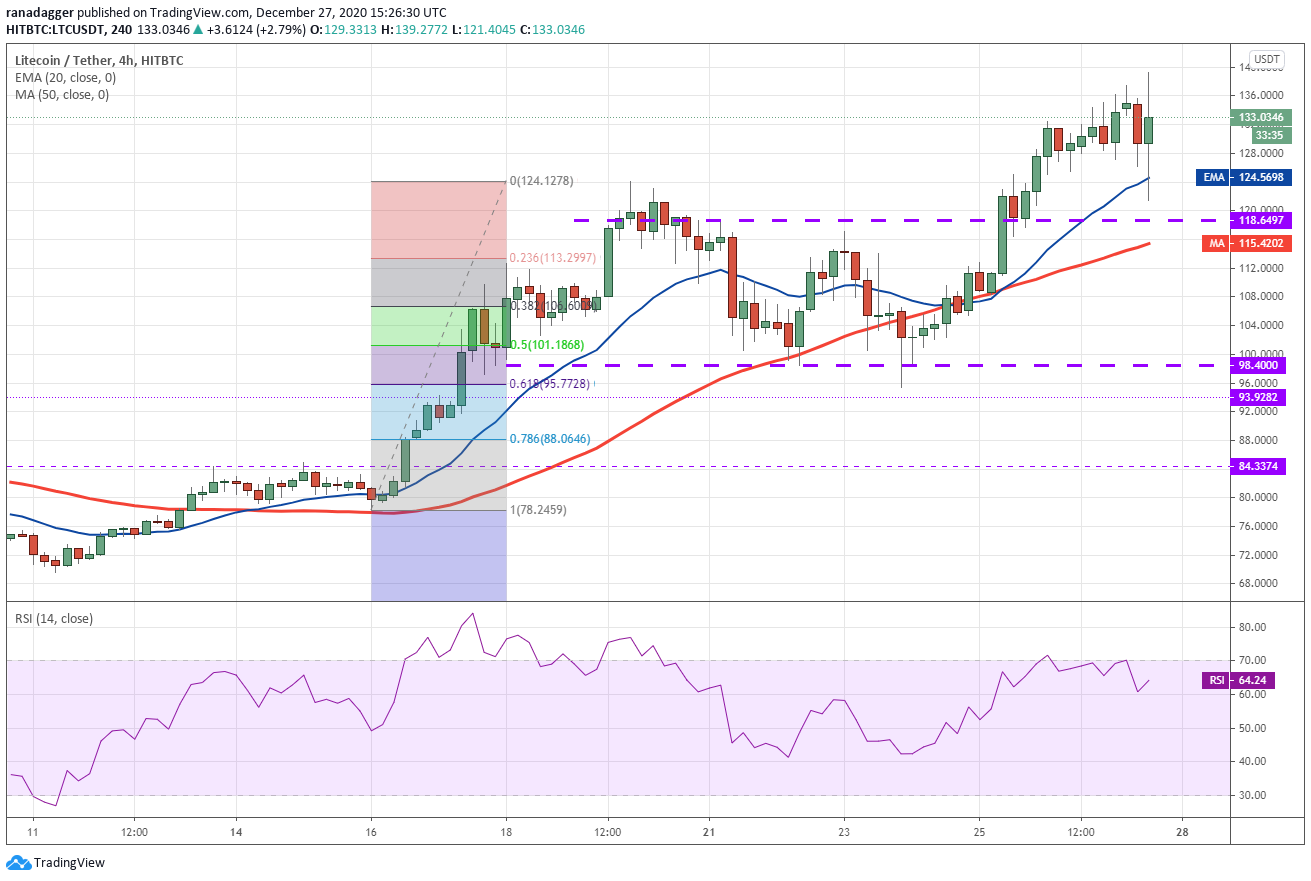 The 4-hour chart is also in an uptrend with both moving averages sloping up and the RSI in positive territory. However, the momentum has weakened as bulls are facing resistance near $136.

If the bulls do not allow the price to sustain below the 20-EMA, the pair could be on target to reach $145. But if the price turns down from the current levels and breaks below $118.6497 and the 50-simple moving average, it will suggest the start of a deeper correction.

Bitcoin Cash (BCH) has been repeatedly attempting to break above the $353 overhead resistance for the past few days. Although the bulls had pushed the price above $353 on two occasions, marked via ellipse on the chart, they could not sustain the higher levels. 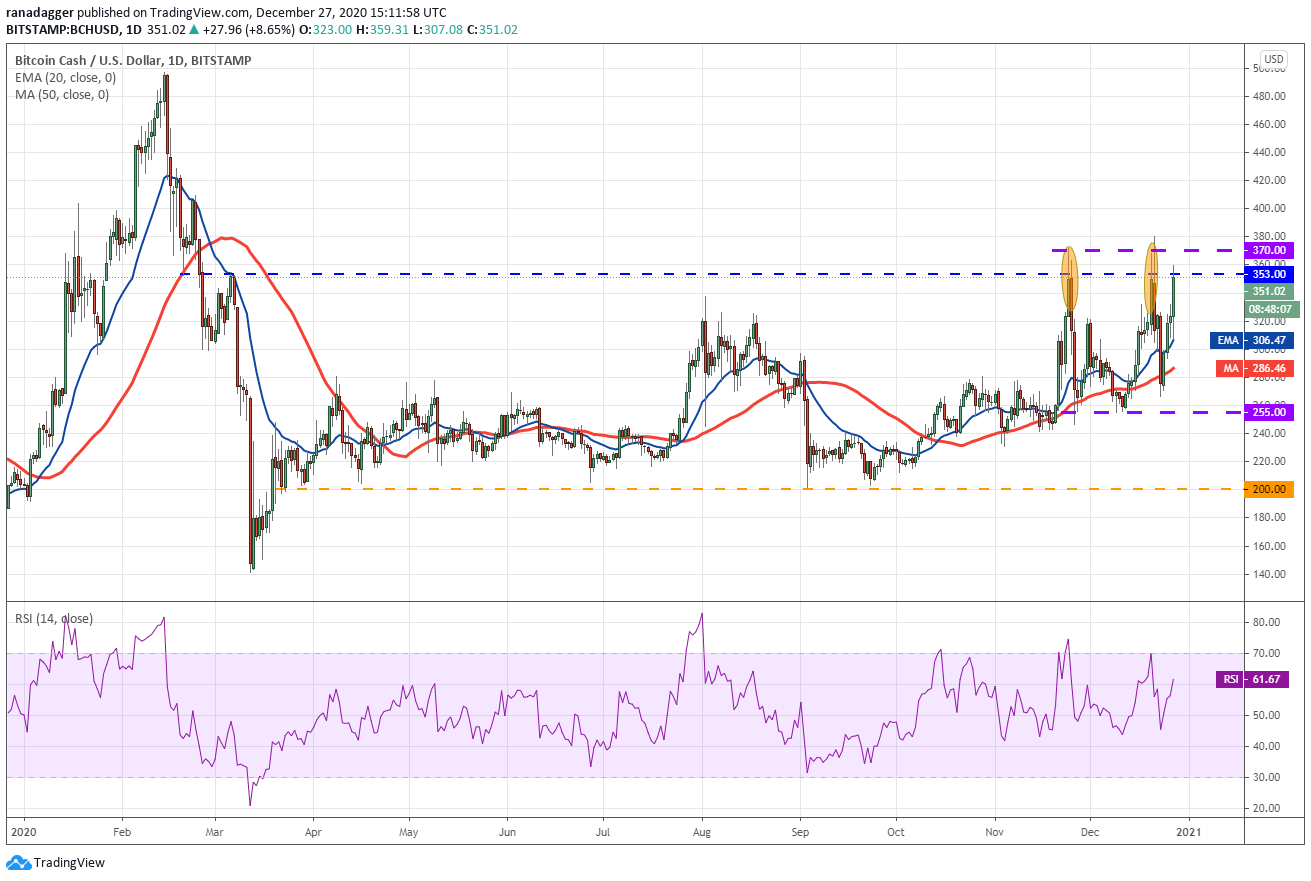 This suggests traders are aggressively selling on any rise above $353. However, the positive thing is that the bulls have accumulated on declines below $280 and are currently attempting to push the price above $353.

If they succeed, the BCH/USD pair could start its journey toward $500. It may not be a straight dash to the target objective because the bears will again try to stall the rally at $409 and $430. But if both these levels are scaled, the pair could pick up momentum.

The upsloping moving averages and RSI above 61 suggest bulls have the upper hand. 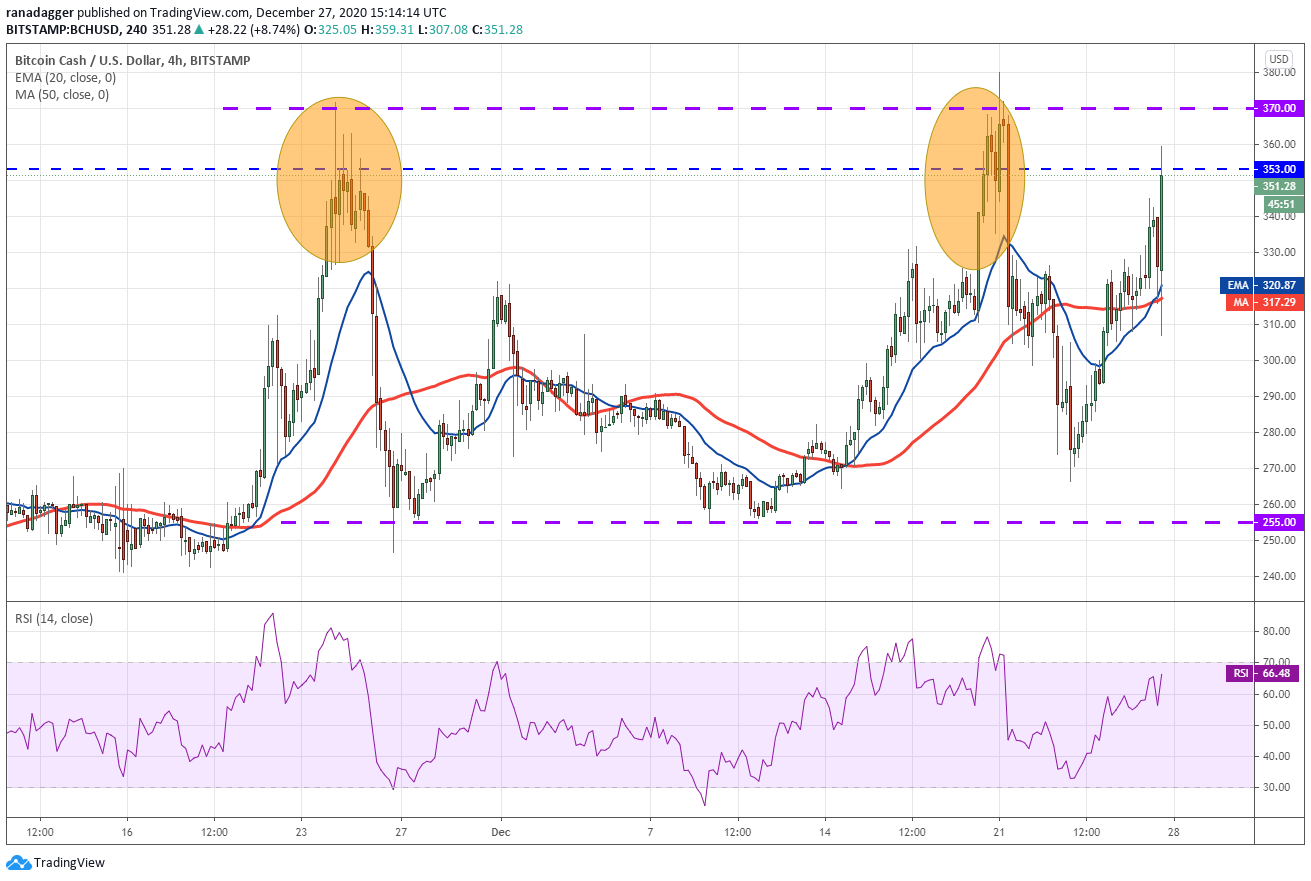 The 4-hour chart shows the pair is currently trading inside a large range between $255 and $370. The bulls are currently attempting to drive the price above the $353 to $370 overhead resistance.

If they succeed, the pair could start an uptrend that has a target objective of $485. The moving averages have completed a bullish crossover and the RSI is in the positive territory, which suggests that bulls have the upper hand.

However, if the price again turns down from the current level or $370, the pair may extend its stay inside the range for a few more days.

The long wick on Dec. 23 candlestick shows traders booked profits after Monero (XMR) hit $167, the target objective of the breakout from the inverse head and shoulders pattern. 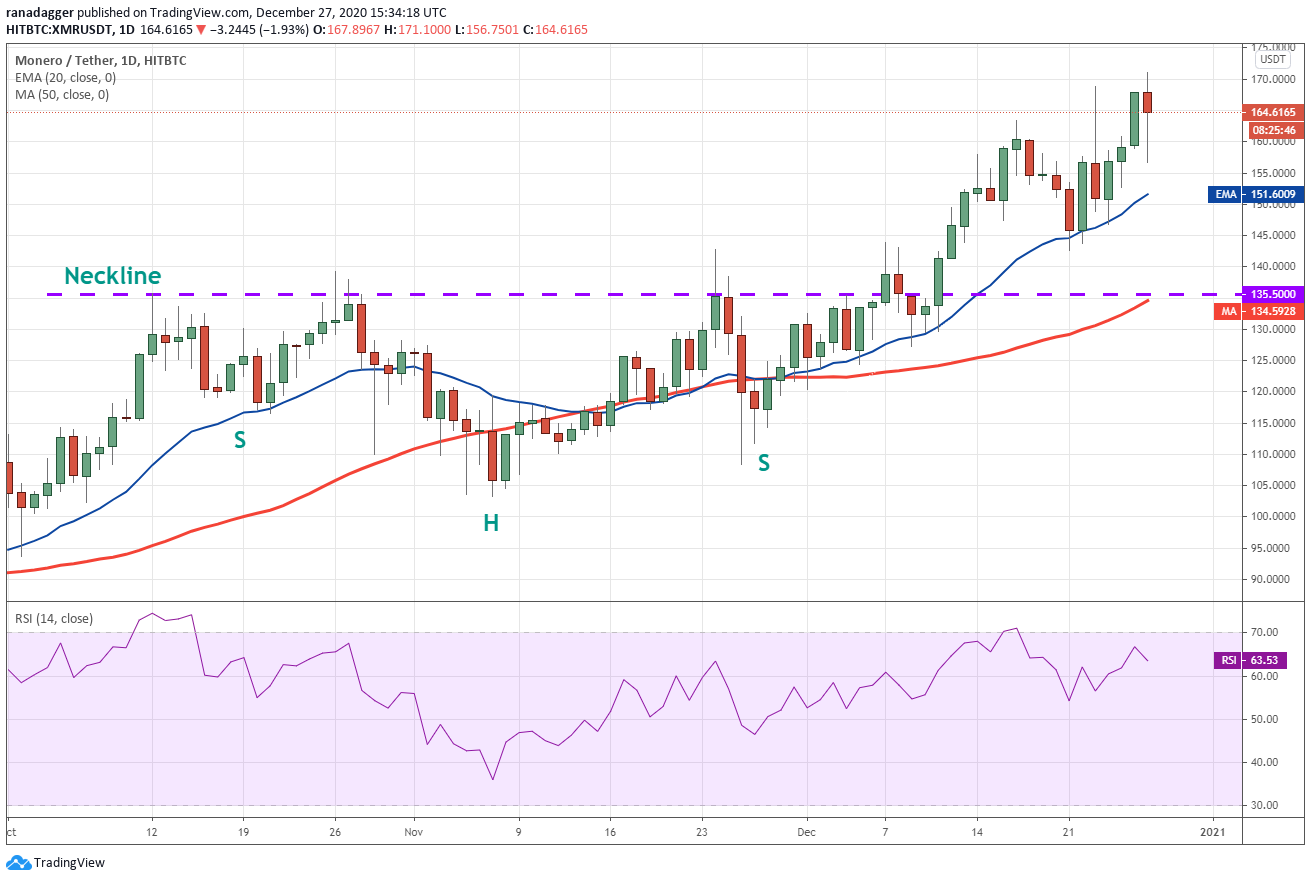 However, the positive thing was that the bulls purchased the dip to the 20-day EMA ($151) on Dec. 24. The upsloping moving averages and the RSI in the positive zone suggest that the sentiment remains positive.

The long tail on today’s candlestick shows that bulls are buying on dips. If they can push and sustain the price above $170, the XMR/USD pair could rally to the next target objective at $197, just below the psychological resistance at $200.

This positive view will be invalidated if the price turns down from the current levels and breaks below the 20-day EMA. Such a move could signal a deeper correction to $135.50. 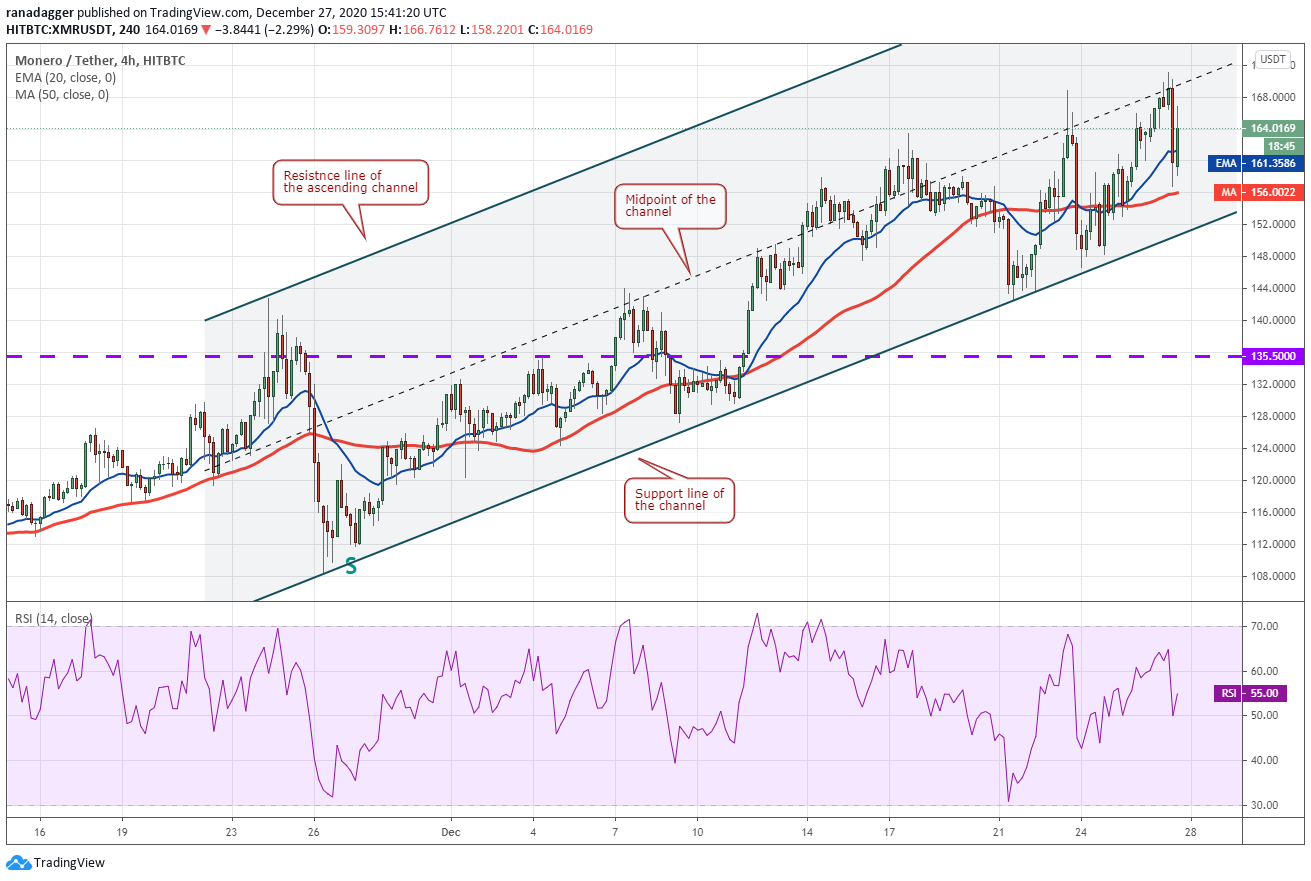 The 4-hour chart shows that the pair has been trading inside an ascending channel but the bulls have failed to push and sustain the price into the top half of the channel. The pair has usually turned down from the midpoint of the channel.

This suggests short-term traders are taking profits at intermittent levels. However, if the bulls can push and sustain the price above the midpoint of the channel, the pair could rally to the resistance line of the channel, indicating a pick-up in momentum.

On the other hand, a break below the support line of the channel could signal a possible change in the short-term trend.

THETA has rallied vertically in the past few days, which pushed the RSI deep into the overbought territory. This has started a correction as seen from the sharp fall today. 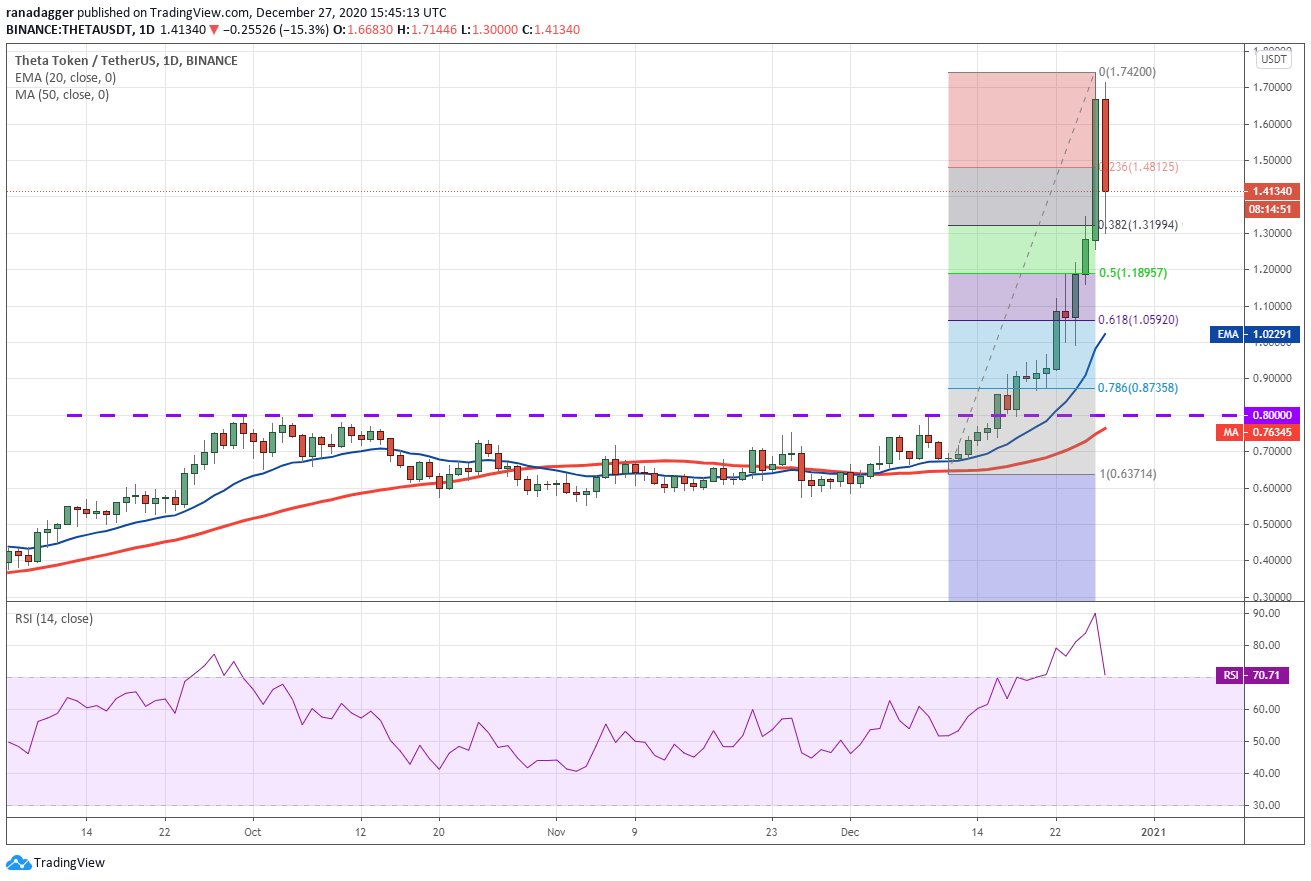 However, if the price does not dip and sustain below the 38.2% Fibonacci retracement level at $1.31994, it will suggest that traders continue to buy on dips as they anticipate the rally to extend further.

Contrary to this bullish assumption, if the bears sink the price below the 50% Fibonacci retracement level at $1.18957, it will suggest that the momentum has weakened. 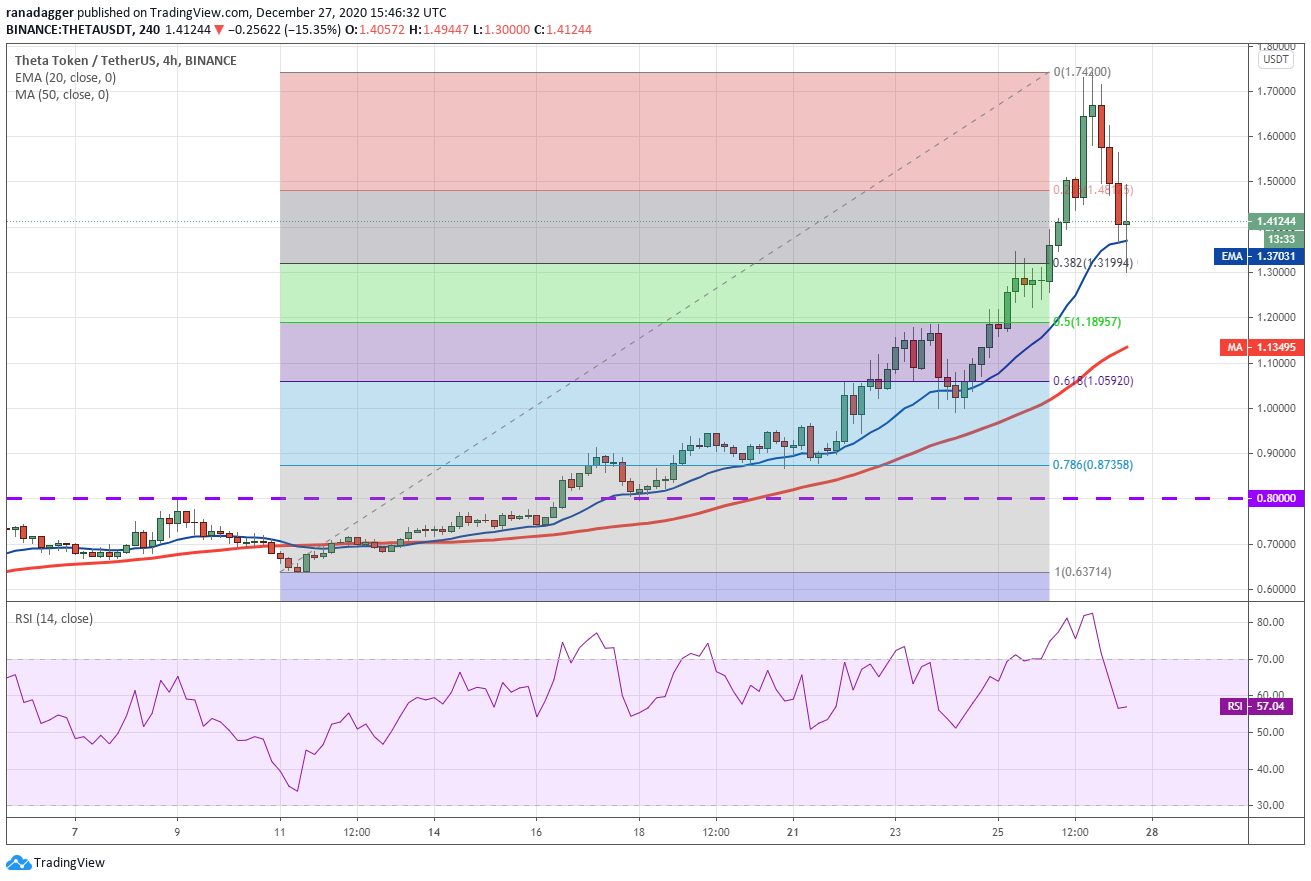 The 4-hour chart shows that the bulls are currently attempting to defend the 20-EMA. If the pair rebounds off this level, the bulls will attempt to resume the uptrend. The upsloping moving averages and the RSI in the positive territory suggest that bulls are in control.

Contrary to this assumption, if the pair breaks below the 20-EMA, it will suggest that the short-term momentum has weakened. That could pull the price down to the next support at the 50-SMA.