BTC appears to be in the early stage of a recovery this week, and ADA, XLM, XMR and MANA could follow.

The bears are trying to extend Bitcoin’s (BTC) record of nine consecutive red weekly candles to ten weeks, but the bulls are trying to avert this negative occurrence. Although sentiment remains negative, Arthur Hayes, former CEO of derivatives giant BitMEX, anticipates Bitcoin to bottom out in the range of $25,000 to $27,000.

On-chain data from Glassnode shows that smart money may have started accumulating Bitcoin. The net outflows from major cryptocurrency exchanges reached 23,286 Bitcoin on June 3, the highest since May 14. 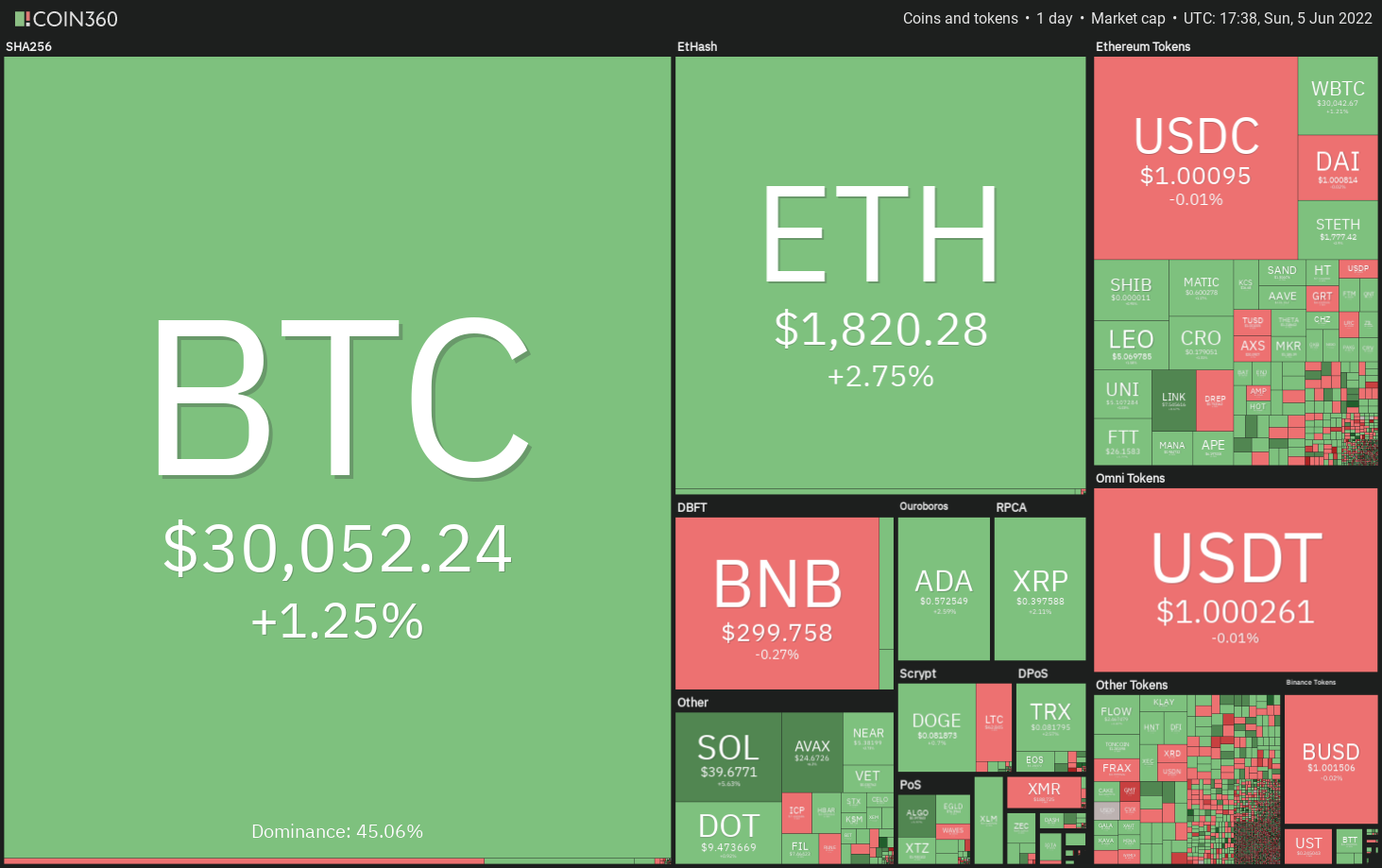 Another positive sign of accumulation is that investment into Bitcoin exchange-traded products (ETPs) was strong in May and has only risen further in the first two days of June, according to an Arcane Research report. The ETPs hold 205,000 Bitcoin under management, which is a new record.

Could Bitcoin turn up and start a recovery? If that happens, could select altcoins follow the leader? Let’s study the charts of the top-5 cryptocurrencies that may lead the relief rally.

Bitcoin plunged below the 20-day exponential moving average ($30,459) on June 1. The bulls attempted to push the price back above the 20-day EMA on June 2 and June 3 but the bears did not relent. 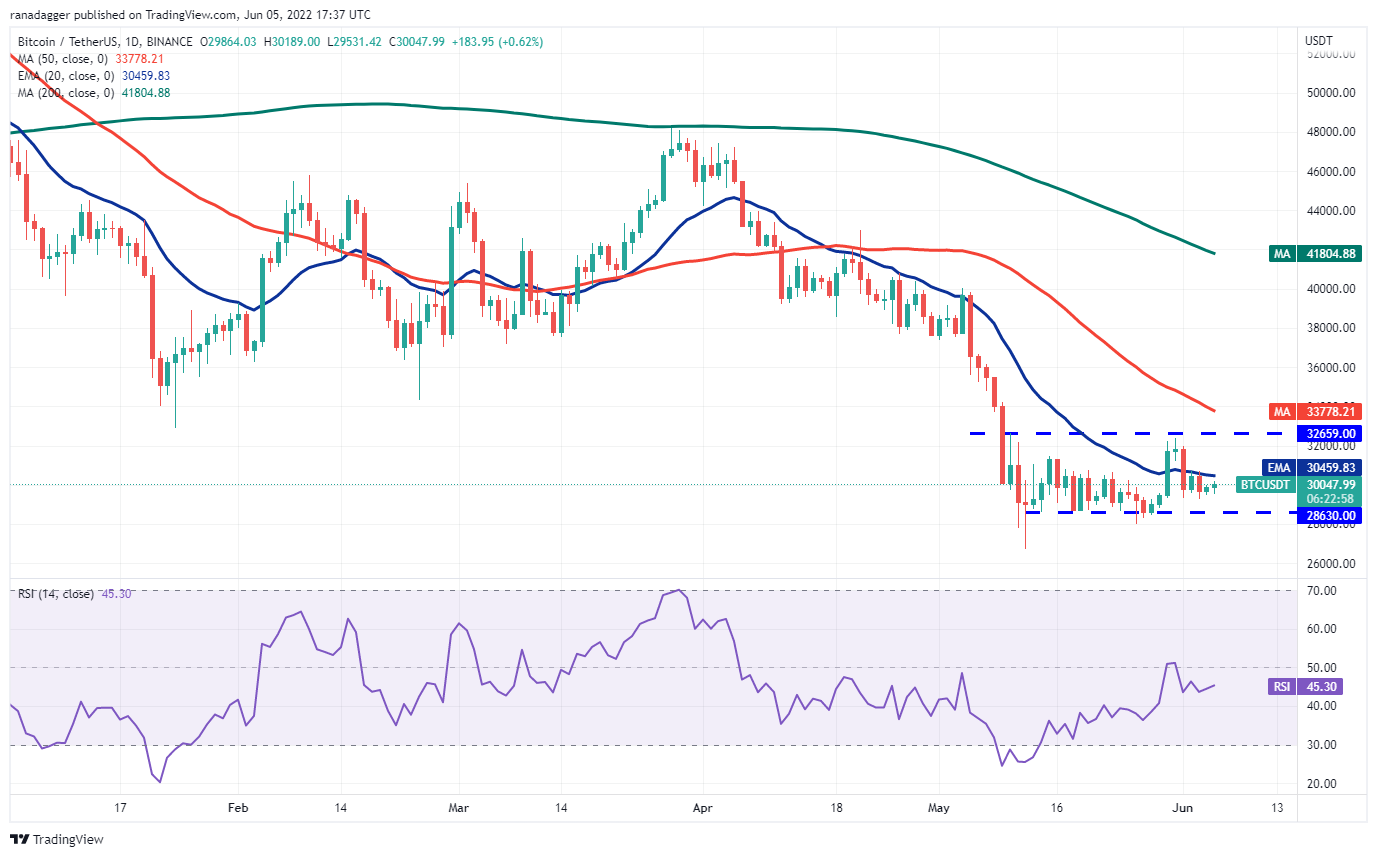 The bears will try to pull the price below the strong support at $28,630. If they manage to do that, the BTC/USDT pair could drop to the vital support at $26,700. The buyers are expected to defend this support zone with all their might because if they fail to do that, the downtrend may resume.

On the upside, the bulls will have to push and sustain the price above $32,659 to suggest that a new uptrend could be starting. The bullish momentum could pick up on a break and close above the 50-day simple moving average ($33,778). The pair could then rally to the pattern target of $36,688 and thereafter to $40,000. 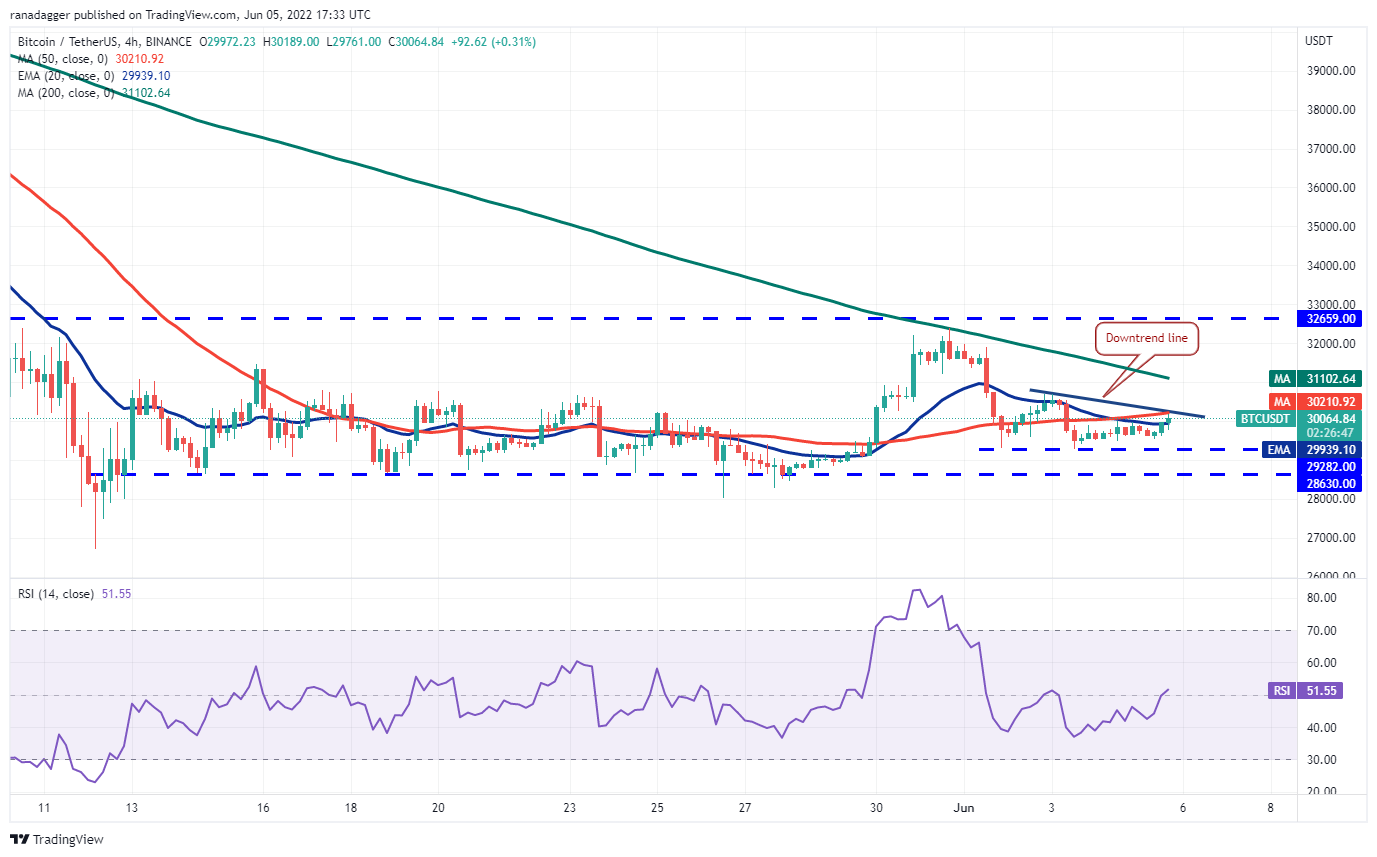 The 4-hour chart shows that the price action is getting squeezed. Although bulls pushed the price above the 20-EMA, they are facing stiff resistance at the 50-SMA. This suggests that bears are active at higher levels.

A minor positive in favor of the bulls is that they have not allowed the price to break below the support at $29,282.

If the price rises from the current level and breaks above the downtrend line, the bulls will attempt to push the pair to the 200-SMA. Conversely, if the price breaks below $29,282, the next stop could be $28,630.

Cardano (ADA) broke above the downtrend line on May 31 but the bulls could not sustain the higher levels as seen from the long wick on the day’s candlestick. 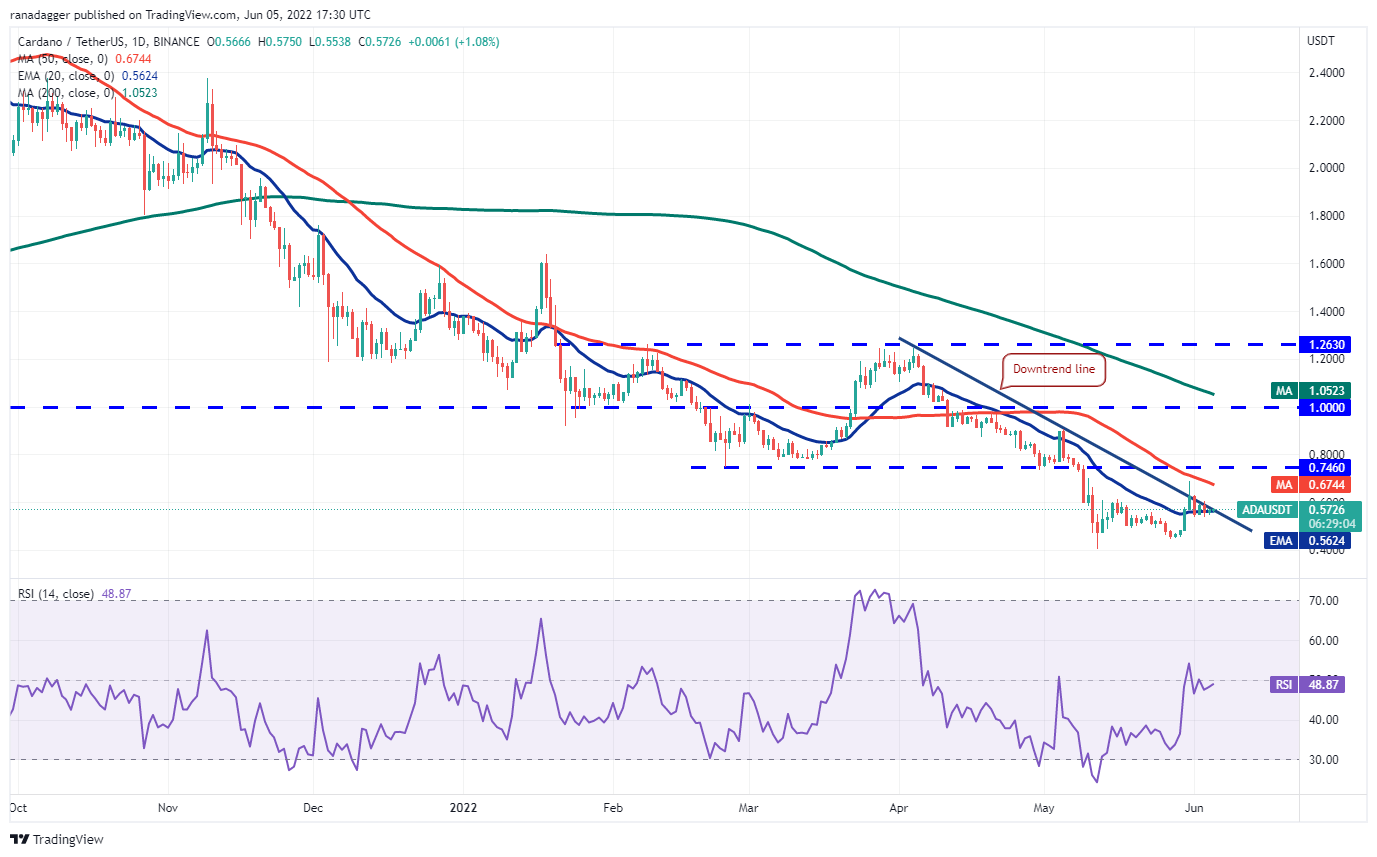 If that happens, the pair could rally to the 50-day SMA ($0.67) where the bears may again pose a strong challenge. A break and close above this level will suggest a potential change in trend. The pair could then rally to the breakdown level of $0.74. 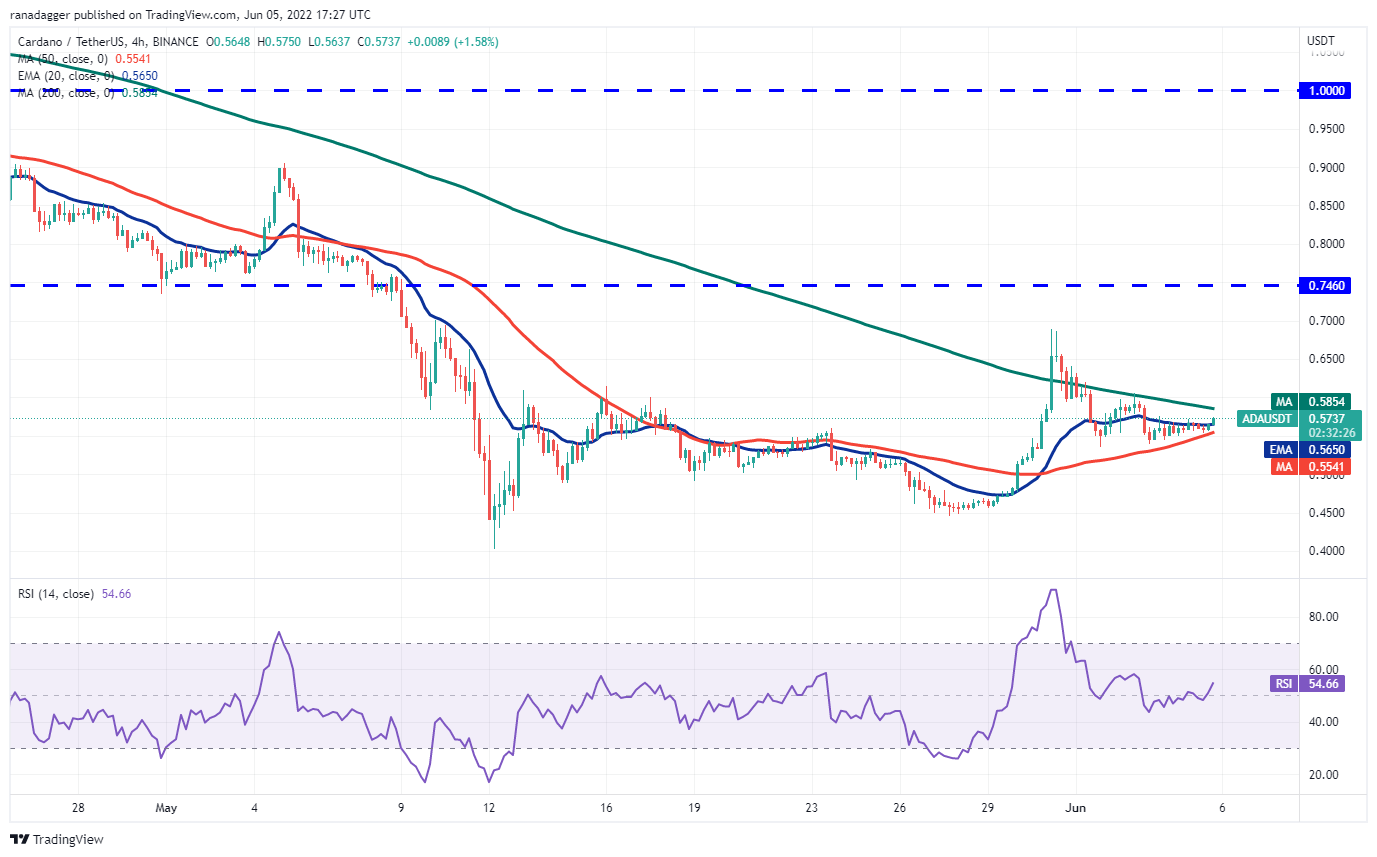 The 4-hour chart shows that the price has been squeezed between the 200-SMA and the 50-SMA but this tight range trading is unlikely to continue for long. If bulls propel the price above the 200-SMA, the pair could attempt a rally to $0.64. A break and close above this level could open the doors for a possible rally to $0.69.

Conversely, if the price turns down and breaks below $0.53, the selling could pick up momentum. The pair may then decline to $0.50 and later to $0.47.

Stellar (XLM) rallied above the 20-day EMA ($0.14) on May 30, which was the first indication that the selling pressure may be reducing. The bears stalled the up-move near the 50-day SMA ($0.15) but they haven’t been able to sink and sustain the price below the 20-day EMA. 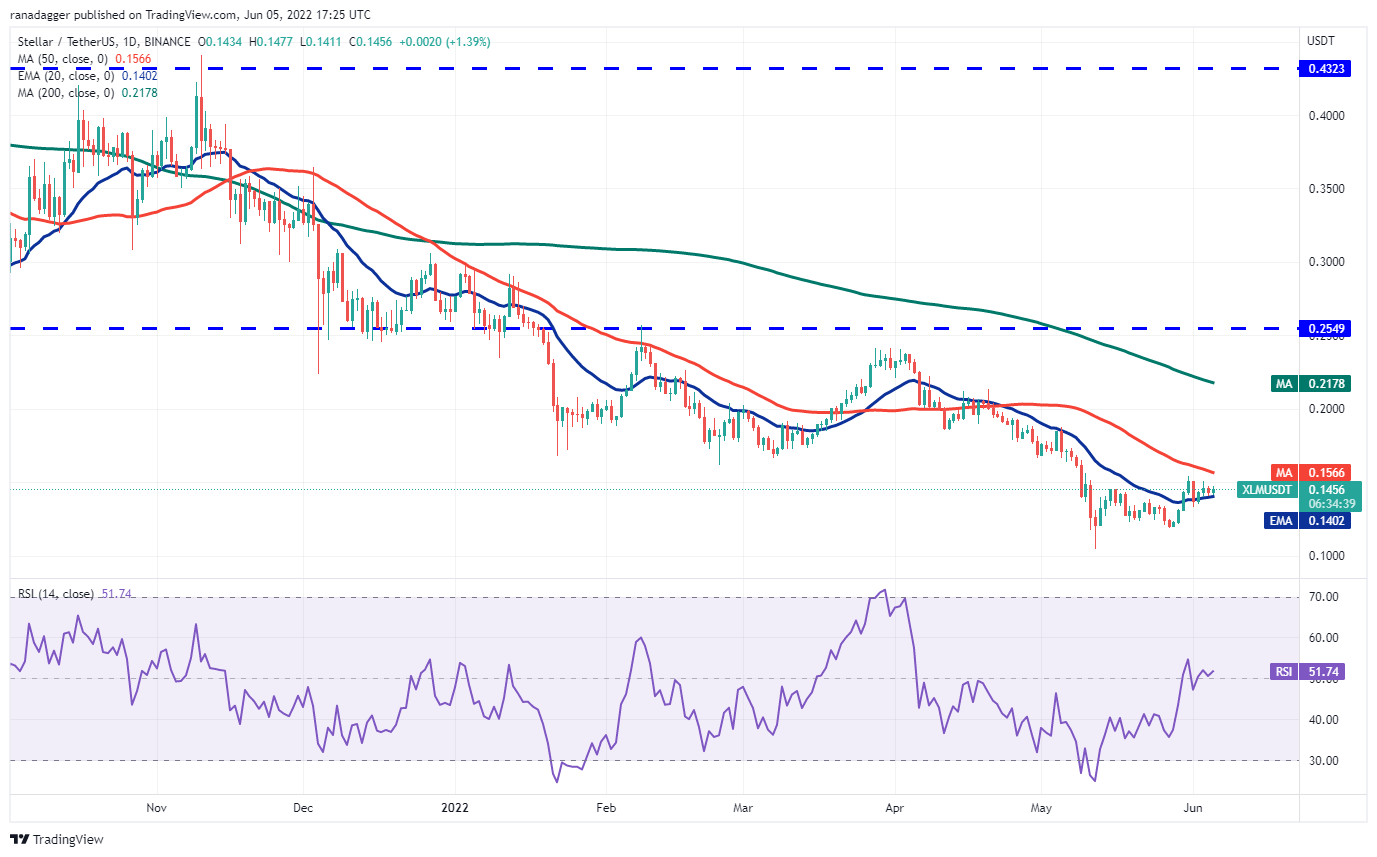 This suggests that the bulls are buying the dips to the 20-day EMA. If bulls drive the price above the 50-day SMA, it will suggest the start of a sustained recovery. The XLM/USDT pair could then attempt a rally to $0.18 and later to the 200-day SMA ($0.21).

This positive view will invalidate in the short term if the price turns down and breaks below $0.13. Such a move will suggest that demand dries up at higher levels. That could pull the pair down to $0.12. If this support also gives way, the bears will try to resume the downtrend by sinking the pair below the psychological level of $0.10. 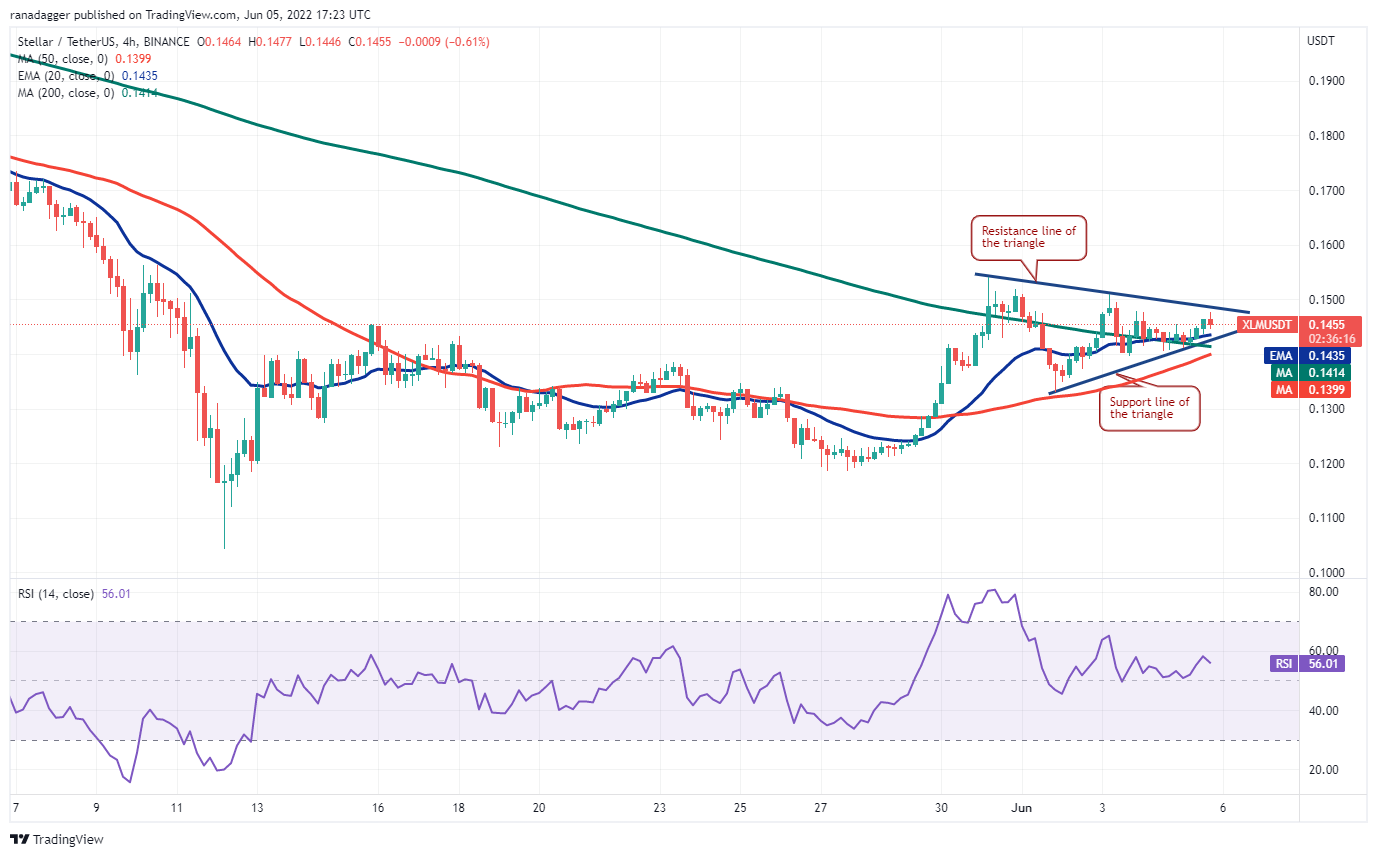 The 4-hour chart shows the price is trading inside a symmetrical triangle. If bulls push the price above the resistance line of the triangle, the pair could rally to $0.15 and thereafter attempt a rally to the pattern target of $0.17.

Alternatively, if the price turns down from the current level, the bears will try to sink the pair below the support line of the triangle. If they do that, the selling could intensify and the pair may slide to the strong support at $0.13. 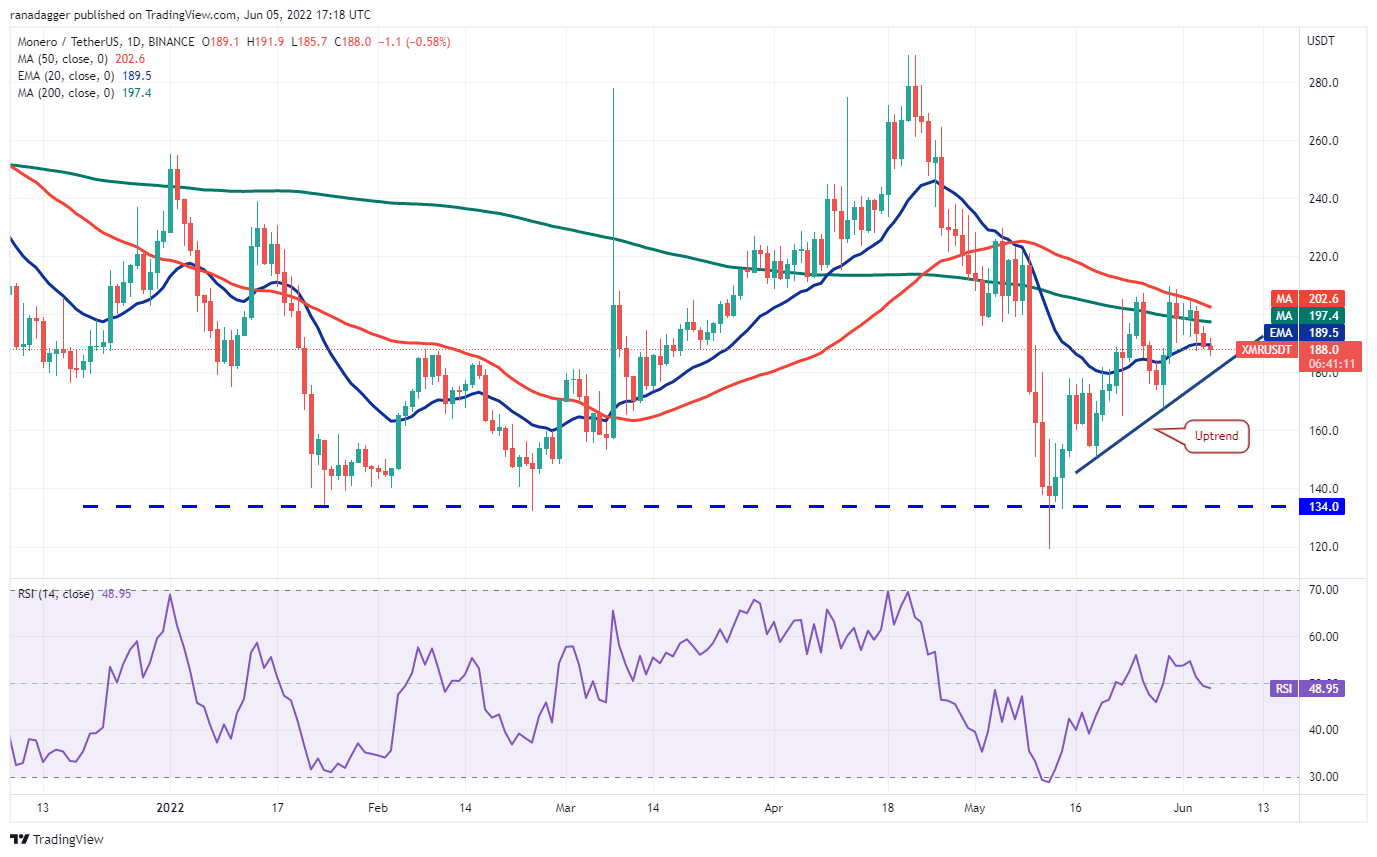 The bulls are attempting to defend the 20-day EMA but the lack of a strong bounce off it suggests weak demand. If the price sustains below the 20-day EMA, the next stop could be the uptrend line. A break and close below this support could pull the price down to $167.

On the contrary, if the price rebounds off the current level, the buyers will attempt to overcome the resistance zone between the 50-day SMA and $210. If they manage to do that, the XMR/USDT pair could extend its rally to $230. 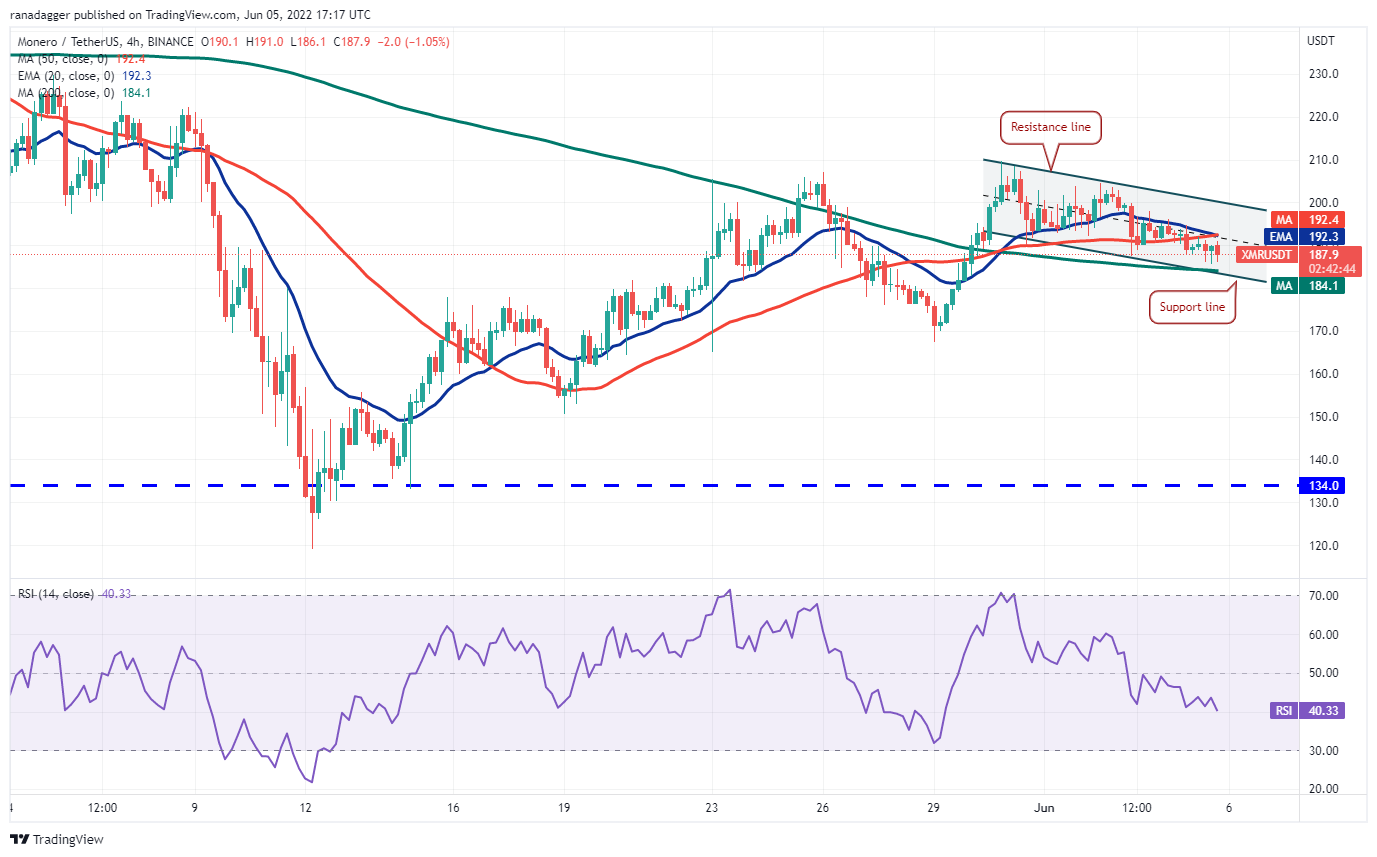 The pair has been declining inside a descending channel, suggesting a minor advantage to sellers. If bears sink the price below the channel, the negative momentum may pick up and the pair could slide to $167.

Alternatively, if the price rebounds off the support line, the buyers will try to propel the pair above the channel. If they manage to do that, the pair could again attempt a break above the overhead resistance at $210.

Decentraland (MANA) has failed to break above the 20-day EMA ($1.06) for the past several days but a minor positive is that the bulls have not given up much ground. This suggests that the bulls are buying on dips as they anticipate a move higher. 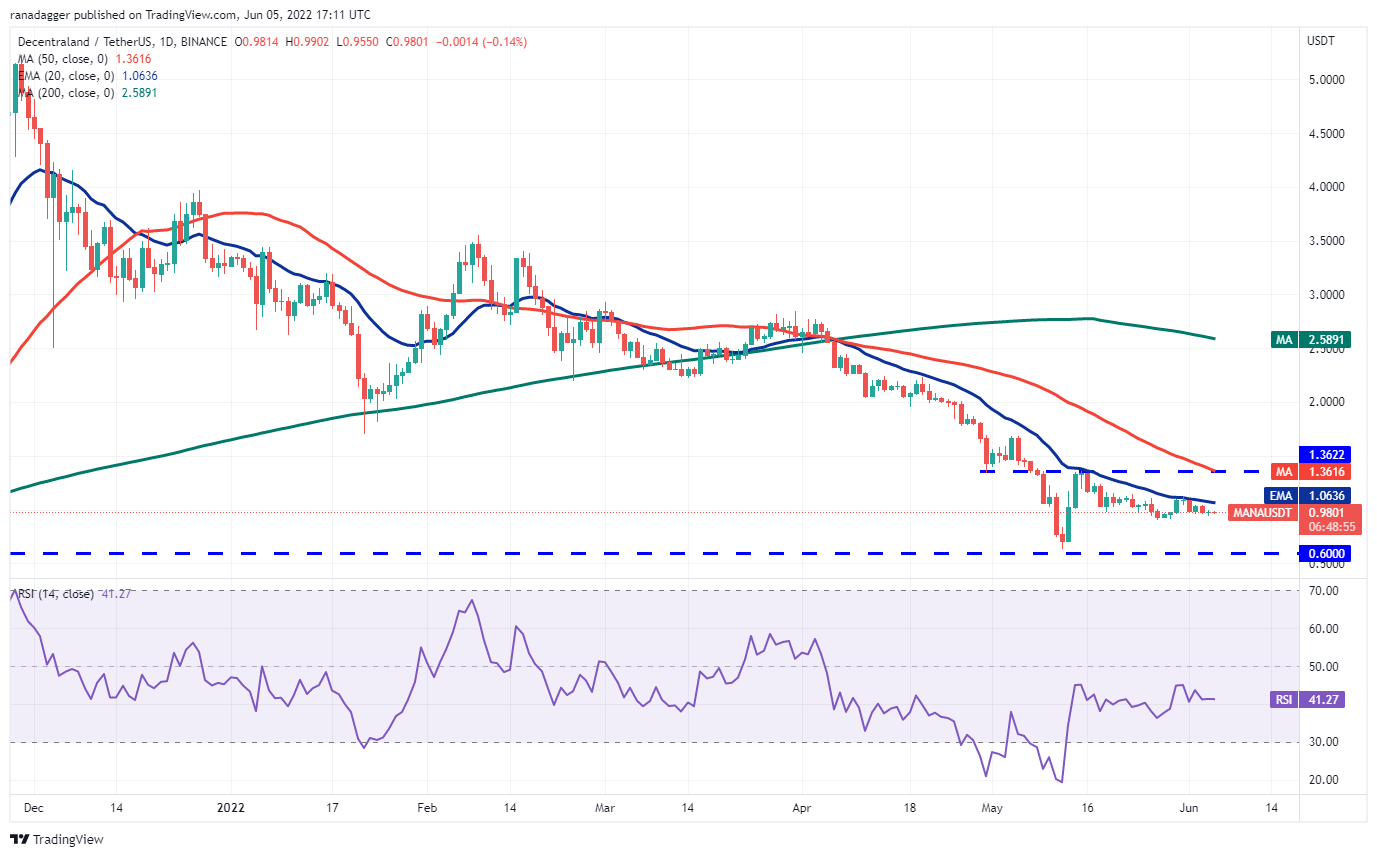 If bulls propel the price above the 20-day EMA, it will suggest that the bears are losing their grip. The MANA/USDT pair could then rise to the overhead resistance at $1.36. This is an important level to keep an eye on because a break and close above it could signal that a bottom may be in place. The pair could then rally to $1.68.

Conversely, if the price turns down and breaks below $0.90, it will suggest that the bears are in no mood to surrender their advantage. The pair could then retest the crucial support at $0.60. The bears will have to pull the price below this support to indicate the resumption of the downtrend. 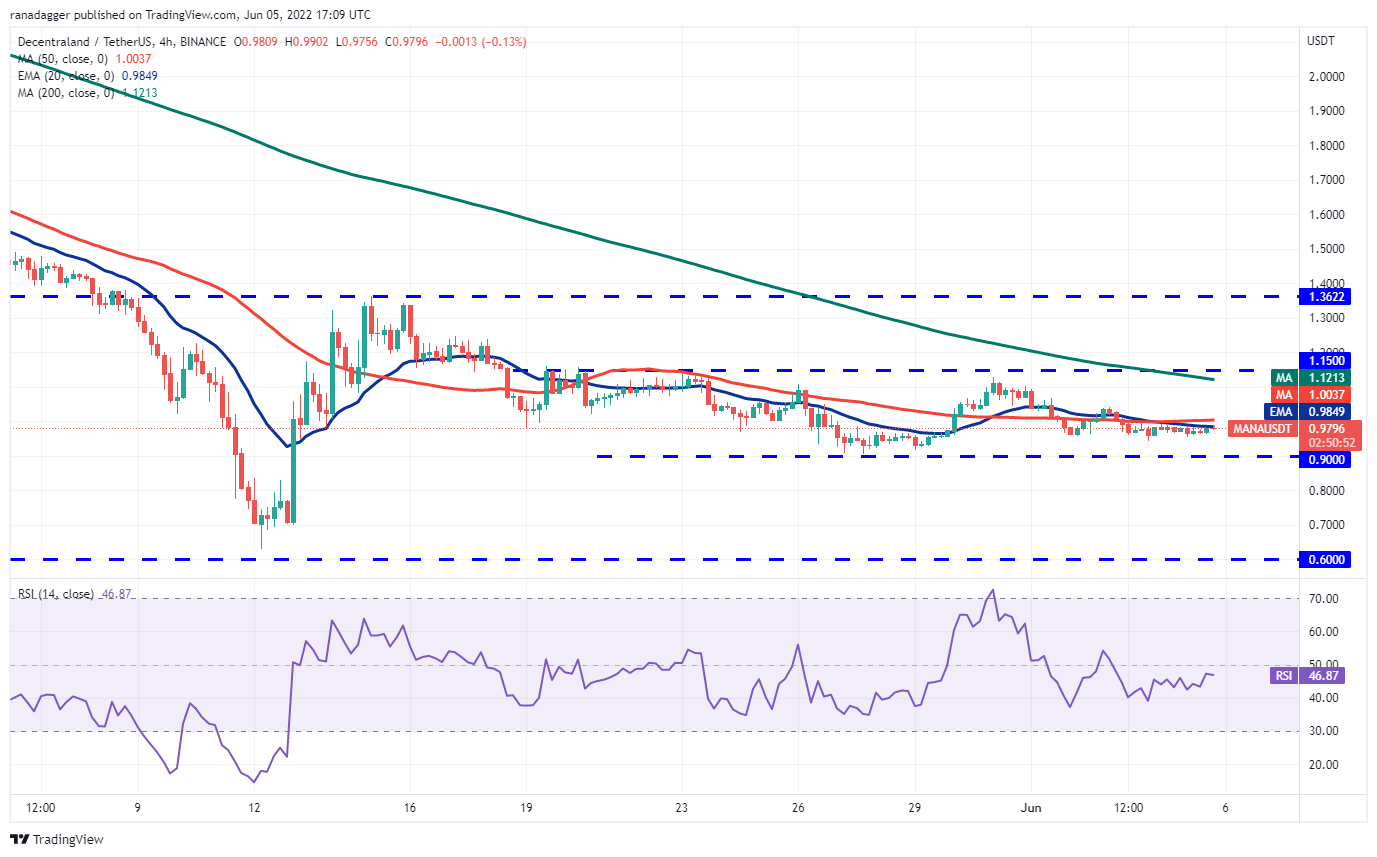 The 4-hour chart shows that the pair has been trading inside a tight range between $0.94 and $1.04. The gradually downsloping 20-EMA and the RSI in the negative territory suggest a slight advantage to sellers. If bears pull the price below $0.94, the pair could drop to $0.90.

On the contrary, if bulls push the price above $1.04, it will suggest that demand exceeds supply. That could open the doors for a possible rally to the stiff overhead resistance at $1.15.

If the price turns down from this level, the pair may oscillate between $0.90 and $1.15 for some more time. A break and close above $1.15 could suggest that buyers have the upper hand.

The Crypto CEO Who Doesn't Want the Job