One random cryptocurrency's market valuation jumped by billions of dollars in just three hours, reaching the 17th spot on the top crypto index.

About $7.65 billion entered the cryptocurrency market in just three hours via a widely unknown altcoin on June 14.

Breaking down those three hours of wild price action illustrated a sequence of incredible pumps and dumps.

According to data fetched by CoinMarketCap.com, the first WEBD jump took its market capitalization from $1.84M at 0954 GMT to $1.5B at 0959 GMT — that's just three minutes.

At one point in time, WebDollar had become the 18th largest cryptocurrency project by market cap, beating more established blockchain protocols like Stellar, VeChain and Tron. 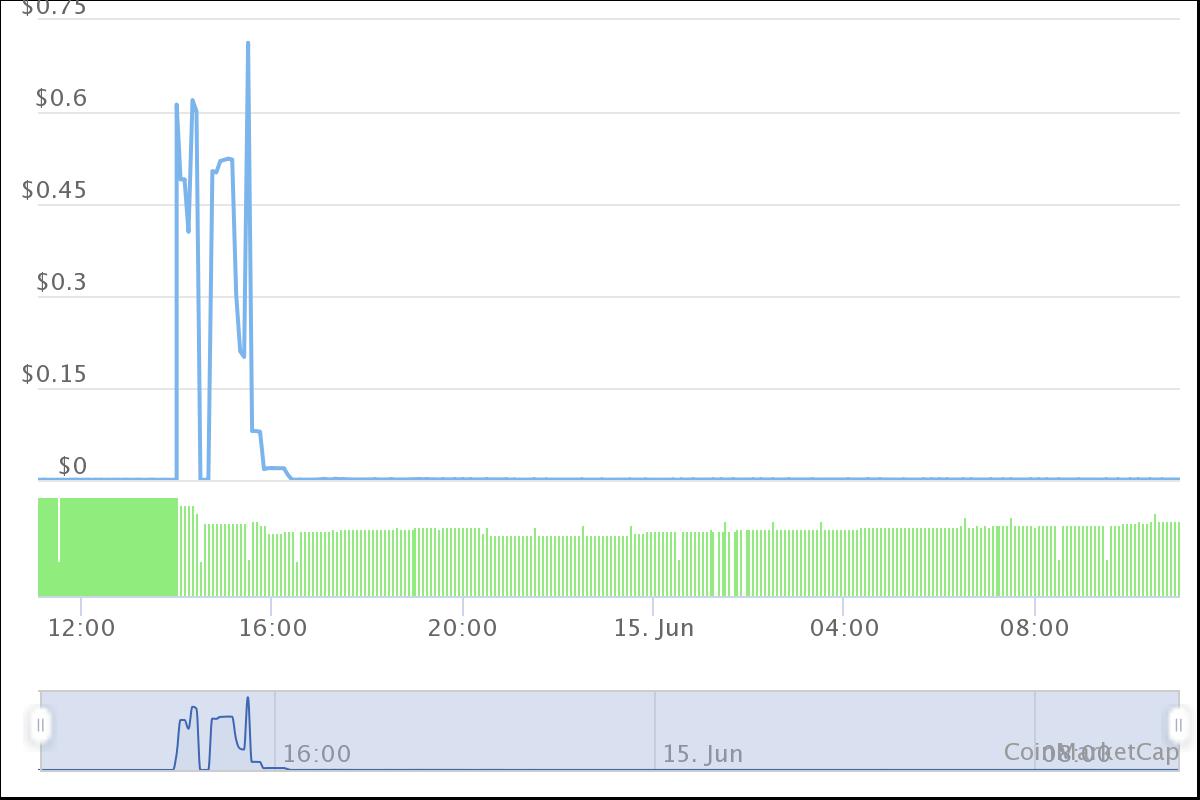 WebDollar's market cap explodes by more than $7.65B within a few hours, only to crash by 99% later. Source: CoinMarketCap.com

But then, the volatile madness came to an end as the token's market valuation crashed by more than 99% less than two hours after topping at $9.5B. As of 0700 GMT on Tuesday, it was $10.38M. Meanwhile, WebDollar's crypto ranking fell from 18 to 873.

WebDollar's price action on Monday showed characteristics of a pump-and-dump token. Apprehensively, the project's market capitalization sprinted upward and downward by multi-billion dollars even as its trading volume remained confined within the $400K range. And looking closely, 99.23% of its trading activity originated from a single exchange called IndoEx.

Most of the WEBD volumes during the token's pump-and-dump were recorded at IndoEx cryptocurrency exchange. Source: CoinMarketCap.com

IndoEx LTD is registered in the United Kingdom under company number 12029621. The exchange is said to be headed by a person named Collins Spencer, who serves as its chief executive and financial officer. Another entity, called Grace North, currently serves as IndoEx's chief technology officer.

Cointelegraph's attempt to locate the two executives on LinkedIn and Twitter returned no results. Meanwhile, a run through IndoEx's reviews by its previous customers showed them accusing both Spencer and North of bearing fake identities.

A deeper look into IndoEx LTD's official filings with the UK Registrar office showed that it received a First Gazette Notice in November 2020 for not sharing details about its shareholders. The company responded to the authority with only one name, Collins Spencer, who holds 1200 shares, hinting that IndoEx is an individually-owned company.

The U.K. Registrar later struck off the notice against IndoEx LTD. Nonetheless, the exchange continues to operate without approval from the UK Financial Conduct Authority (FCA).

Evidence so far points that IndoEx was instrumental in single-handedly pumping and dumping the WEBD token on Monday. The token was trading flat during the Tuesday session of June 15.