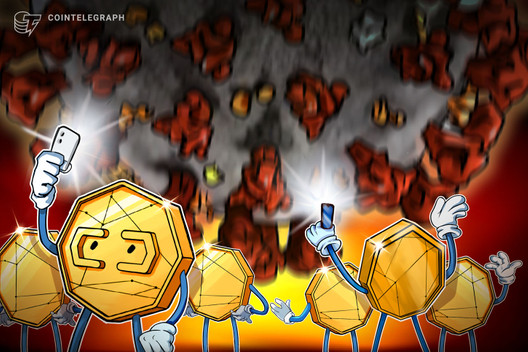 Crypto industry has the best historical moment to change its reputation into a successful innovative tech sector within the finance industry.

The Fed opening the floodgates to unlimited standing quantitative easing paired with a $6 trillion stimulus package is an unprecedented event. It’s the most heavy-handed intervention by the Fed to date. For many crypto proponents, it is a rallying cry amid an interventionist monetary policy reminiscent of the 2008 environment that led to the release of the Bitcoin (BTC) whitepaper by its anonymous founder.

The giant stimulus package equates to roughly 28% of the United States’ 2019 GDP, arriving while credit markets are in flux and bond yields are trending toward zero. As the sharpest decline in American history, current market shock to the S&P 500 may only be a byproduct of unwinding leveraged positions from major asset managers such as risk-parity funds and rules-based funds.

The negative impact of COVID-19 on the real economy still looms over the horizon. Unemployment rates are surging so fast that the U.S. Labor Department has actually asked states to postpone the release of their numbers to temper negative market sentiment.

Had anyone presented the current situation to a crypto enthusiast in December, they likely would have said that they couldn’t have imagined a scenario more conducive to crypto’s macro narrative. That scenario may not be all sunshine and rainbows, though.

We may be witnessing a fundamental shift in legacy market sentiment — specifically, the cozy relationship between the government and corporations. The stimulus package revealed that corporations were woefully unprepared for any type of supply/demand shock and had abused low-interest loan rates to buy back their own shares.

Nonetheless, most corporations are being bailed out along with major fund managers to the tune of the Fed and Treasury Department’s $4.25 trillion standing lending facility. In comparison, small businesses are left with a meager $300 billion trough.

Struggling Americans, increasingly without jobs while their bills are piling up, only receive a paltry $1,200 check — a reality more suggestive of corporate socialism, according to Nassim Taleb.

Bitcoiners were largely caught up in a “safe-haven” narrative for the legacy cryptocurrency while the S&P 500 tumbled and panic reigned over credit markets. However, Bitcoin (BTC) fared just as poorly, as the assets in virtually every market were sold off in unison — with the crypto market structure effectively breaking on March 12 and 13.

Despite this, Bitcoin has climbed back without stimulus injections, only posting a 10% price drop for the first quarter of 2020.

Bitcoin’s safe-haven narrative may have taken a hit during the last month, but this is precisely the moment it was created for. Add in a rising generation of Millennial investors who have now watched the legacy system fail spectacularly twice, and the picture of a stark opportunity for crypto to prevail among the public begins to crystalize.

And there are already some encouraging signs.

Early indications of a positive impact

The shuttering of local businesses has strained employees and small businesses to a tenuous level. Interestingly, cannabis shops have been deemed “essential” in states like Colorado, highlighting a unique development.

It’s no secret that cannabis companies have struggled to maintain consistent banking relationships, even despite the plant’s legal status in California and Colorado.

This is where technology could provide a useful redundancy for merchants. For example, consumers can purchase goods at a cannabis store using Bitcoin’s lightning network without actually interacting with the network’s interface. Instead, user bank accounts are debited cash as if the purchase had been made with a debit card.

The larger context of wielding crypto payments for redundancies can apply to financial hedges, censorship-resistance and access to liquidity when the banking system is in flux. Stablecoins like Tether (USDT) may seem, ironically, a better alternative to storing U.S. dollars in a bank account, as Bank of America recently instituted withdrawal limits and is reportedly hassling clients to not tap into their full credit lines.

It’s hard to pinpoint precisely why, but some observations indicate that either this may be a byproduct of increasing OTC desk operational demand, stablecoins are a venue for increasing exposure to the most in-demand asset right now (USD), or people are merely hedging positions in the crypto market — which is actually very liquid and has a topology similar to the FX market.

It may sound odd to turn to crypto during financial turmoil, but the industry has evolved to a more sophisticated level than its more immature former versions.

As a whole, the crypto industry is markedly different than when mainstream investors flocked to the initial coin offering mania of 2017. User interface and experience have drastically improved, liquidity is much better, analytics has progressed substantially, derivatives are booming, and the mining sector is industrializing.

Investors surveying the landscape now will likely be impressed with the progress if they had left in early 2018, when SegWit was barely adopted and the hype was untenable. Coinbase even revealed that retail investors comprised a bulk of the buyers when the Bitcoin price briefly dipped under $4,000 in mid-March.

The more seasoned crypto environment is also supported by a slew of projects outside of Bitcoin explicitly.

Part of the original stimulus bill (which was eventually slashed) included language for a digital dollar. A purely digital fiat currency has dangerous implications on financial privacy, and crypto can help provide an avenue for people nervous about the incremental privacy intrusions being made by their government. However, a financial ecosystem based on simple private transactions between counterparties is insufficient.

In this context, commercial services can be built using blockchain, where app and DApp users can interact with services privately — whether transacting in stablecoins, sharing location data or sharing specific personal data within the usual experience of any standard mobile app on their phone.

Beyond privacy, some projects are designed to alleviate some of the scaling burdens of decentralized finance on Ethereum — a necessity for meaningful DeFi adoption — but Ethereum desperately needs scaling solutions for its DeFi platforms, with MakerDAO nearly shattering following the steep drop in Ether’s price.

But in crises like COVID-19, when there is more at stake than financial outcomes, taking a thoughtful approach in solidarity with the ongoing quarantine and stay-at-home orders is necessary. Sometimes, that means canceling events at massive expense to projects or publications, such as Maxonrow rescheduling its inaugural Hackathon to Factory Berlin on Oct. 3.

The point is that everyone is struggling amid an unprecedented global crisis. From a financial outlook, the situation is favorable for crypto, but first, projects and crypto assets need to weather the economic storm ahead. Then, maybe the infrastructure progress and early indications of blossoming adoption will follow.

Crypto’s foundation is built upon an ever-reducing trust in the legacy financial system. That system has exposed its faults once again, and while there is still a ways to go for the broader crypto industry to appeal to the mainstream, the current macro narrative has never been more conducive to the sector’s eventual success.

Now, it’s about seizing that opportunity.

Andrew Rossow is a millennial attorney, law professor, entrepreneur, writer and speaker on privacy, cybersecurity, AI, AR/VR, blockchain and digital currencies. He has written for many outlets and contributed to cybersecurity and technology publications. Utilizing his millennial background to its fullest potential, Rossow provides a well-rounded perspective on social media crime, technology and privacy implications.