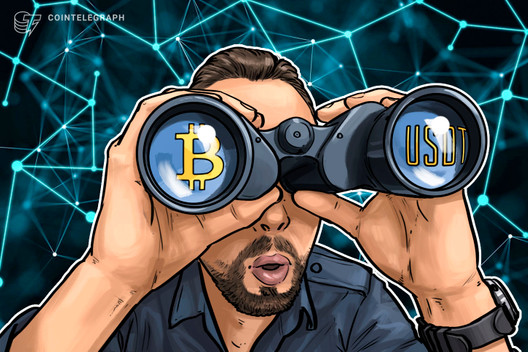 A crypto data firm rep explained how analysis of Tether’s on-chain data can be used to forecast Bitcoin’s bull runs.

Marketing and social media director at Santiment, Brian Quinlivan, told Cointelegraph on May 7 that the percentage of USDT held on exchanges often anticipates Bitcoin’s bull runs. He explained the principles behind the analysis:

“Most USDT isn't just being taken off exchanges to be stored in wallets or cashed out through a FIAT-based platform like Coinbase. When people aren't using USDT, they most often put it in Bitcoin. And what's cool is the fact that this USDT percentage often fluctuates a few hours or days in advance of BTC's price reacting to it. So monitoring this metric in advance can end up producing a tremendous advantage by catching a sudden fluctuation early enough.”

The correlation is expected to last

Quinlivan pointed out that this correlation started a couple of years after USDT launched, once the stablecoin gained traction. Now, he explained that Tether is clearly utilized as the top price-stable token. He also states that he is confident this correlation will continue to manifest itself in the future. Quinlivan noted that the one year chart has shown a distinct and clear inverse correlation for the past 9-10 months.

Quinlivan also pointed out a relationship between the amount of decentralized stablecoin, DAI, on crypto exchanges and Ether (ETH) price. He explained:

“The amount of supply of DAI on exchanges often seems to lead the way in Ethereum's price. However, this is a bit less consistent than the BTC-USDT tie, since ETH's price is more reliant on what BTC is doing at any given time.”

Lastly, the data firm rep acknowledged that other metrics are worth looking at as well. He specifically mentioned an interest in social trends, such as keywords and topic mentions on various social platform conversations. He said that — over the past couple of months — the firm observed the fear related to COVID-19 has had a direct inverse correlation to the price of BTC.

Renewed interest in the leading cryptocurrency is also often attributed to the upcoming halving of Bitcoin’s block reward halving. This interest is not equally distributed and Cointelegraph recently analyzed which countries are the most interested in the event.