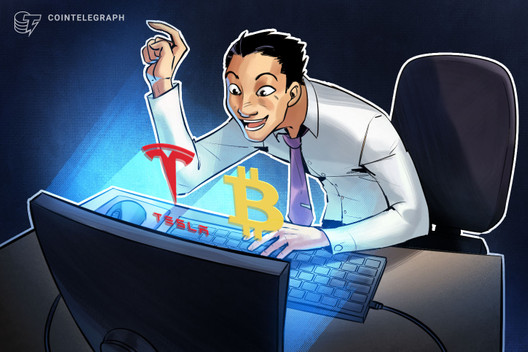 Comparisons are being made between Bitcoin and Tesla as prices soar in 2020, but BTC has a ways to go to reach TSLA.

Bitcoin price and Tesla stock have both been in the limelight recently, leading some retail investors to question if there are commonalities between the two assets. As Bitcoin (BTC) continues to hover around the $12,000 mark (as of publication time), in doing so, the largest coin by market capitalization is reaching year-to-date highs that haven’t been seen since June 2019.

Furthermore, data suggests that Bitcoin was the most viewed asset after Tesla stock in the United States last month.

The increasing interest in both Bitcoin and Tesla have some wondering if BTC is behaving more like a tech stock. Findings from London-based digital asset management firm CoinShares noted that in its growth phase, Bitcoin does indeed behave like a tech stock:

“Bitcoin’s risk profile is rather similar to that of a technology stock: if it reaches its potential, the value could be immense, but at the same time, there is a non-zero chance that it fails entirely.”

While this may appear to be the case, Phil Bonello, director of research at crypto fund Grayscale Investments, told Cointelegraph that it isn’t fair to simply look at returns when drawing conclusions between Bitcoin and Tesla, with BTC being up by about 63% year to date and TSLA with a 365% rise:

“Most risk assets have been correlated with each other because they have all been dependent on the strength or weakness of the denominator: the US dollar. Additionally, when assets sell off aggressively like they did in March, correlation approaches 1 as everyone needs liquidity.”

Bonello’s point is verified by Tesla stock dipping to a low of $361 on March 18. Bitcoin also reached a low of nearly $3,800 back in March. Bonello further commented that while he doesn’t watch the ins and outs of Tesla closely, there is currently a secular bull market. “I tend to believe we are in a secular bull market driven by monetary and fiscal stimulus,” he said.

Echoing Bonello, Natalia Karayaneva, advisor to Arrington XRP Capital and CEO of Propy — a blockchain-based real estate platform — told Cointelegraph that there are new bubbles emerging around the stock market and Bitcoin:

“Instead of buying tangible consumer goods, people are investing in these assets as a way to not hold fiat. Similarly, institutional investors are investing in everything related to digital assets.”

What are the similarities between Bitcoin and Tesla?

Market value aside, it’s interesting to consider the inherent similarities between Bitcoin and Tesla. According to Bonello, what Bitcoin and Tesla have in common is the potential for exponential growth, making them both especially volatile and reflexive.

This point is also valid for most cryptocurrencies, not just Bitcoin. Mati Greenspan, a crypto market analyst and founder of Quantum Economics, told Cointelegraph that he had been tracking a correlation between TSLA and Chainlink’s LINK token, which is now the world’s fifth-largest coin by market value. Greenspan’s findings highlight the volatility of both asset classes. 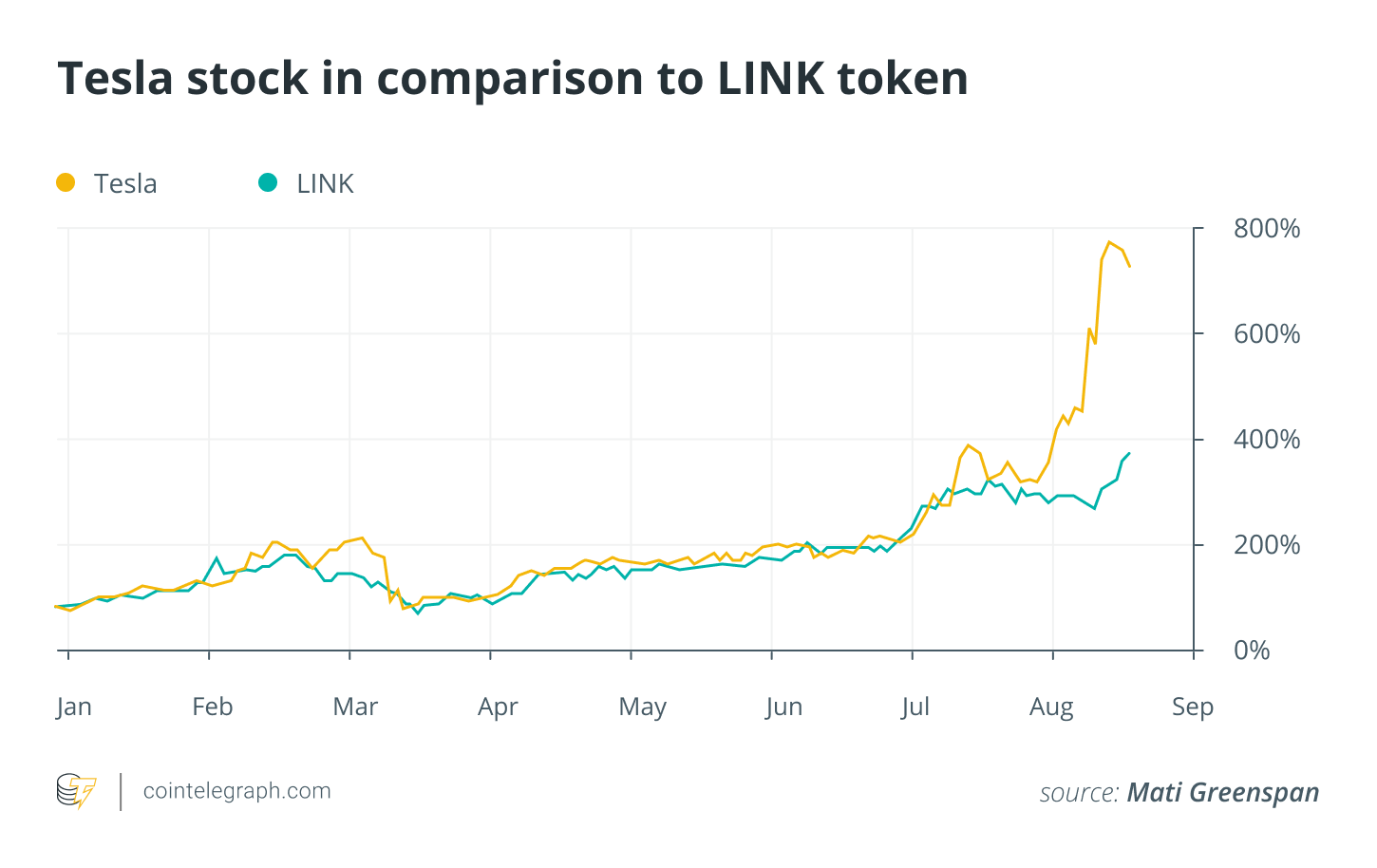 Millennial retail investors seem to be the most interested in volatile assets like Tesla and cryptocurrencies. Recent findings indeed prove this to be true, as CNBC noted in February that Tesla was the most held stock on the personal-finance company SoFi Invest, which is heavily used by millennials. Cointelegraph also previously reported that research from Stack Funds shows that 50% of Bitcoin investors are millennials.

Another interesting commonality between Bitcoin and Tesla is the revolutionary impact associated with the two assets, as Tesla is greatly disrupting the transportation sector while Bitcoin is aiming to revolutionize finance.

Yet, while disruptive technologies like Bitcoin and Tesla may drive mass interest from younger investors with similar behaviors, Bitcoin still remains a unique asset class. Grayscale’s Bonello commented that Bitcoin’s unique qualities may make it an appealing investment, but it has also been a challenge for traditional investors to make sense of its value, “particularly because Bitcoin doesn’t offer cash flows like other investments, such as Tesla,” he noted.

Michelle O’Connor, vice president of marketing at trading platform Uphold, told Cointelegraph that Bitcoin, unlike Tesla, has a more realistic point of entry: “There’s an appetite for risk or returns that have become fluid as the ability to buy these assets on a smaller scale (fractionally).” She concluded:

“Bitcoin is around $11,500 right now, if that was the point of entry it would be far less appealing to a wider audience. Because you can purchase fractions of Bitcoin, it’s point of entry is more realistic, the potential returns are instant and they’re not associated with a government.”

US Senate Candidate Is a Hodler, Sees Bitcoin as Alternative Store of Value to US Dollar

So Now They’re Hacking DeFi Protocols Before They’ve Even Launched?