Telegram says the SEC is on an “unfounded fishing expedition,” and Google Play lifts MetaMask ban.

Telegram’s lawyers haven’t had a quiet start to 2020. A judge gave them less than a single business day to respond to a request from the United States Securities and Exchange Commission to hand over details of how the company spent the proceeds of its $1.7 billion initial coin offering. In reply, the lawyers called for the court to throw out the regulator’s demands — insisting the “voluminous and highly sensitive bank records” have little relevance to the case in question. All eyes are now on Judge P. Kevin Castel in New York, who will decide whether Telegram has to disclose the information. The long-running legal dispute centers on the SEC’s allegations that Telegram broke the law by selling unregistered securities.

An executive who served as the head of technology at Barclays — and co-founded the British challenger bank Starling — has unveiled plans to launch a multicurrency account for fiat and crypto in the first quarter of 2020. Mark Hipperson’s new venture, called Ziglu, is set to allow users to spend their funds using a Mastercard debit card — with cryptocurrencies converted instantly at the point of sale. Although the venture is only going to be available within the United Kingdom to begin with, Ziglu has applied to the Financial Conduct Authority to become an official issuer of electronic money. As well as enabling consumers to buy and sell foreign currencies at interbank rates, crypto purchases and sales are set to be available at the best price across multiple exchanges.

With the likes of Libra knocking on its doorstep, the European Central Bank seems keen to launch its own digital currency. But according to a brand-new working paper, the organization wouldn’t want such a coin to be too attractive to consumers. A newly released document concludes that there are pros and cons to launching a central bank digital currency, but warns that action must be taken to prevent savers selling their fiat in times of crisis. The author of the paper, Ulrich Bindseil, said a potential solution could be to introduce a two-tier interest rate system that would offer “unattractive” rates to holdings above a certain threshold. Such measures are controversial in the crypto world, with Bitcoin proponents arguing that discouraging savers is a common failure of the fiat currency system.

Boomers may be a constant source of derision online, but savvy millennials might want to remain tight-lipped. New research suggests that younger, Bitcoin-aware consumers could be set to inherit almost $70 trillion in value from this older generation by 2045 — that’s more than three times higher than the GDP of the U.S. This could pave the way for an influx of investment in BTC in the years to come. As the Twitter account Crypto Balkans noted, it might be time to retire the hashtag #OKBoomer and replace it with #ThanksBoomer. 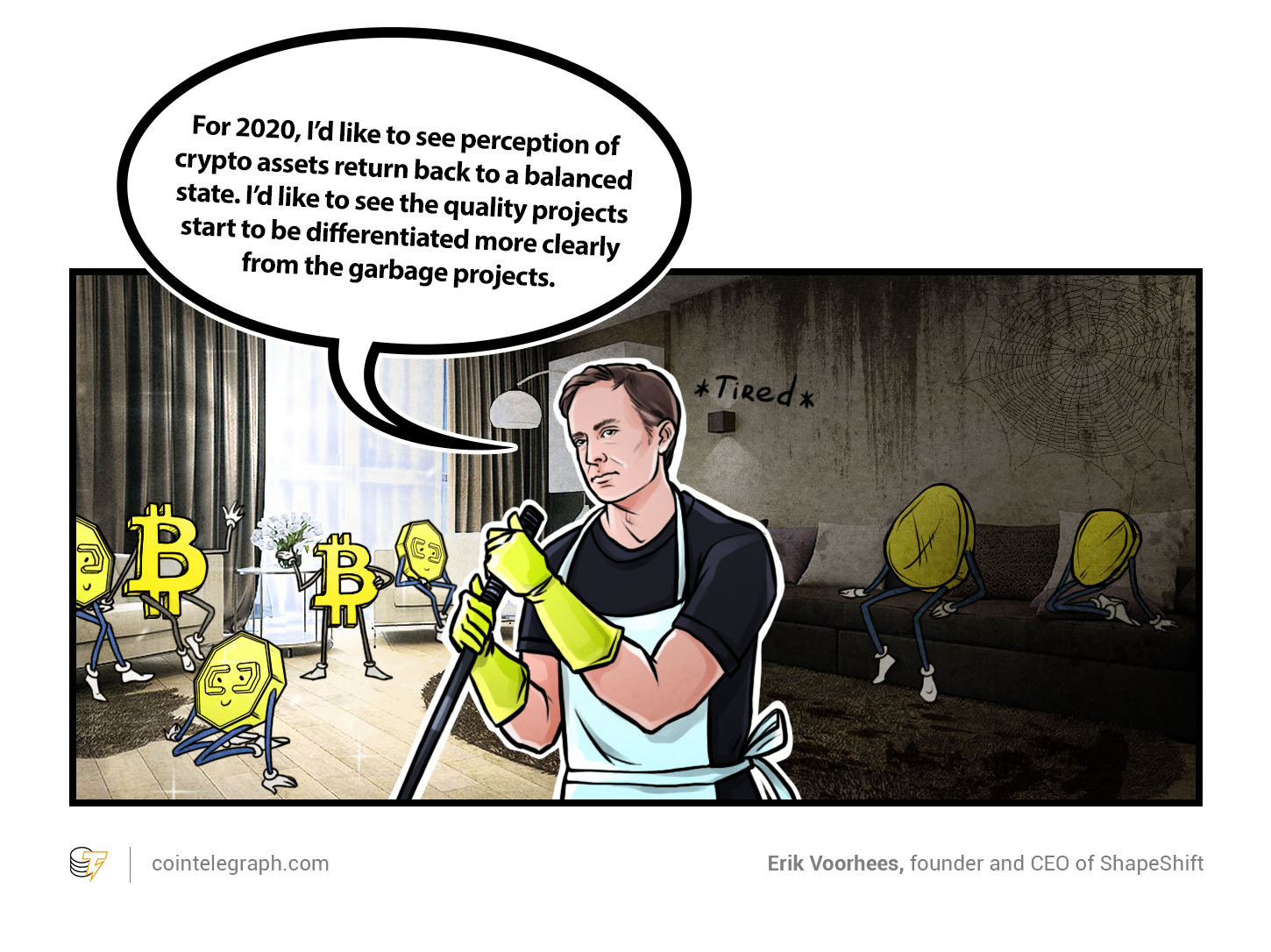 Champagne corks have been popping over at MetaMask — and not just because a new decade has arrived. Google has now reversed a short-lived ban on the browser add-on, meaning its app is available on the Google Play store once again. The extension, which includes a built-in crypto wallet, enables people to run Ethereum-based decentralized applications. Google claims the blacklisting was a mistake, and that it mistakenly thought that it was an app that mined crypto on mobile devices. Last week, it was revealed that Apple may force Coinbase to remove a DApp browser feature from its crypto wallet application. Critics have claimed that this “censorship” is set to continue because Web 3.0 “is in direct competition with Google and Apple.” 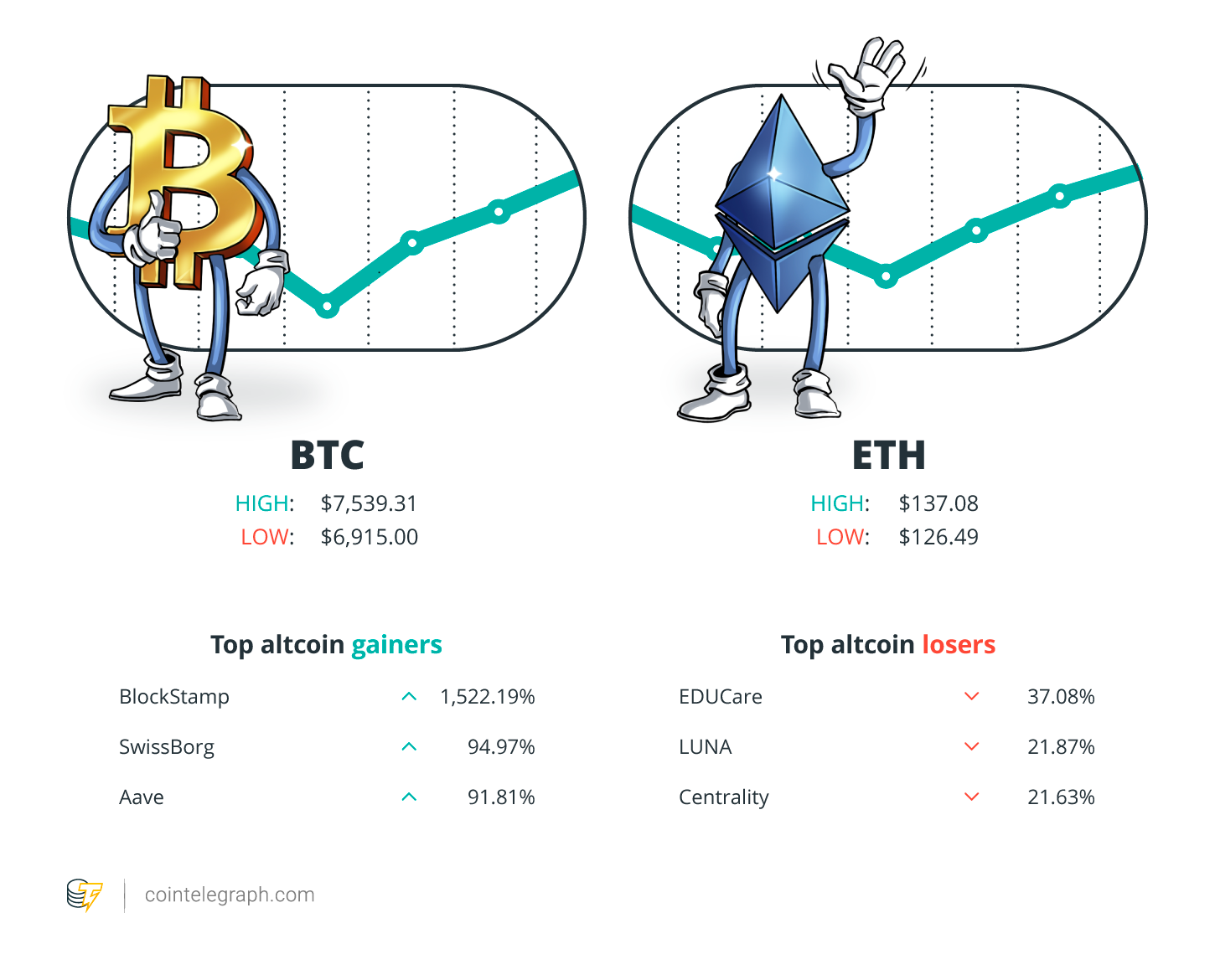 “I know our crypto community is not currently equally distributed and I would like to see more women join us to reach half of the community. I would also like for some of the projects to hit mass scale and deliver mass adoption.”

“For 2020, I’d like to see perception of crypto assets return back to a balanced state. I’d like to see the quality projects start to be differentiated more clearly from the garbage projects.”

“My wishes are 1) for cryptocurrency exchanges to work together to service the massive underbanked and unbanked community across the globe. 2) For governments to understand the needs of the blockchain community and work to support more innovation in this space, and 3) to see a world where individuals are in control of their financial assets without intermediaries.”

“One of our key goals for 2020 is to bring crypto to the masses. For this, we aim to enable fiat-to-crypto trading for 180+ fiat currencies.”

“There were over 379 articles written, prematurely declaring the end of Bitcoin. Not only did Bitcoin survive, it thrived, becoming the top performing asset of the decade. The naysayers were proved wrong and we learned an important lesson about human nature: most big breakthroughs are contrarian ideas that people dismiss and ridicule at the start.” 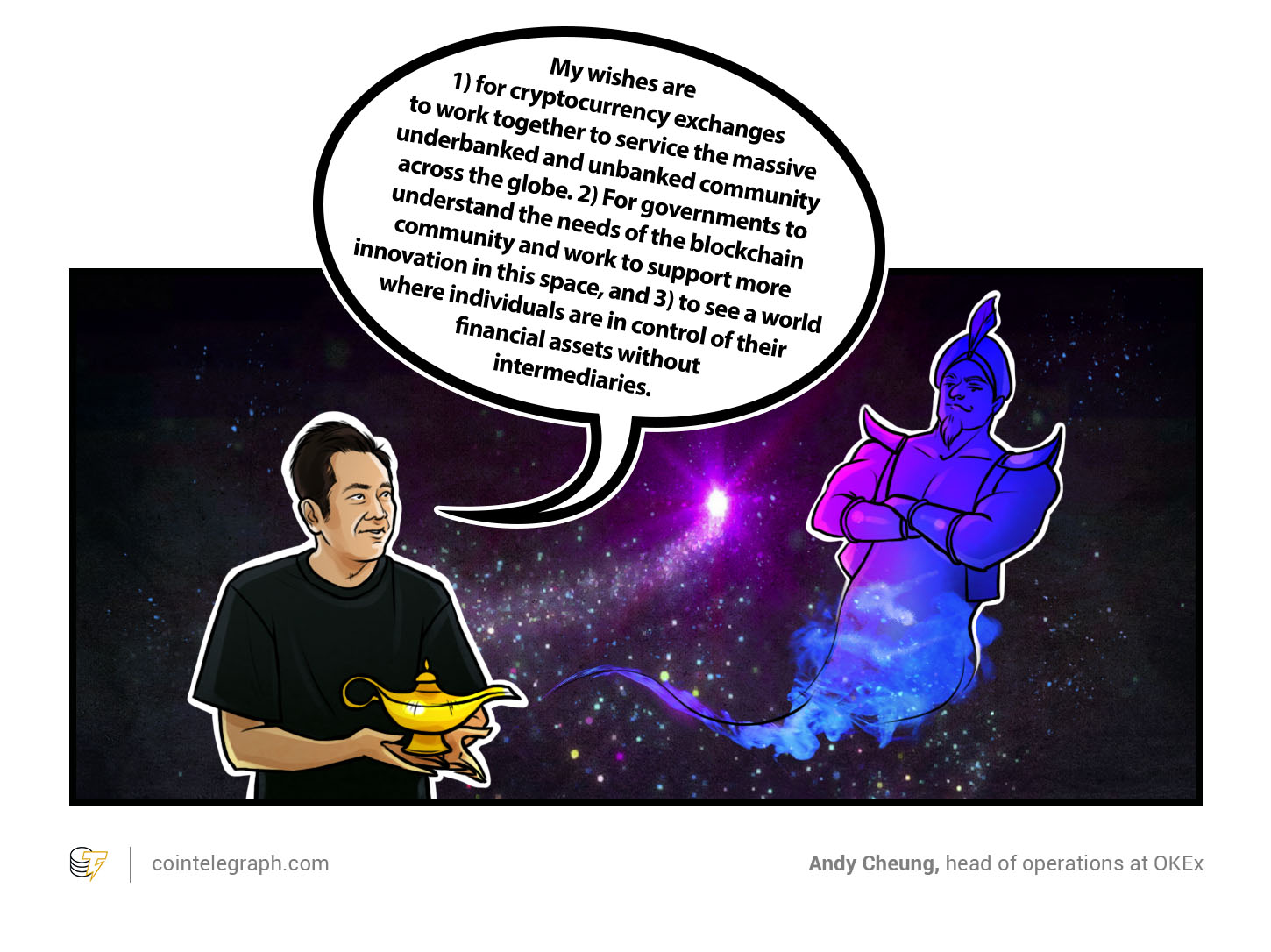 Now it’s time to take a look at our favorite 2020 vision of the week (get it?). The CEO of the Bitcoin lending platform Nexo.io, Antoni Trenchev, has said he believes BTC will “very easily” balloon to $50,000 over the course of this year. He described it as an “incredible asset uncorrelated to the overall market” — and even claimed the cryptocurrency’s journey up to $20,000 was reminiscent of German hyperinflation after the First World War. Naturally, not everyone is on Trenchev’s wavelength. The CEO of the ZenGo wallet, Ouriel Ohayon, raised eyebrows when he “predicted” BTC would crash to below $1,000 this year. He later insisted he was joking — something that’s plausible given that his other predictions included that all hardware wallets will be hacked, XRP will become the most important cryptocurrency, and that Satoshi’s identity will be revealed.

As a new decade begins, Bitmain is fighting battles on multiple fronts. Reports suggest the crypto mining giant is planning to reduce its workforce by another 50% before the next BTC halving event in May. The layoffs could be completed before mid-January. In other news, Bitmain’s co-founder Micree Zhan Ketuan has initiated court proceedings against company shareholders in a bid to restore his voting control of the firm. This comes after fellow co-founder Jihan Wu abruptly announced that Zhan had been dismissed from all his roles “effective immediately” and without his consent. 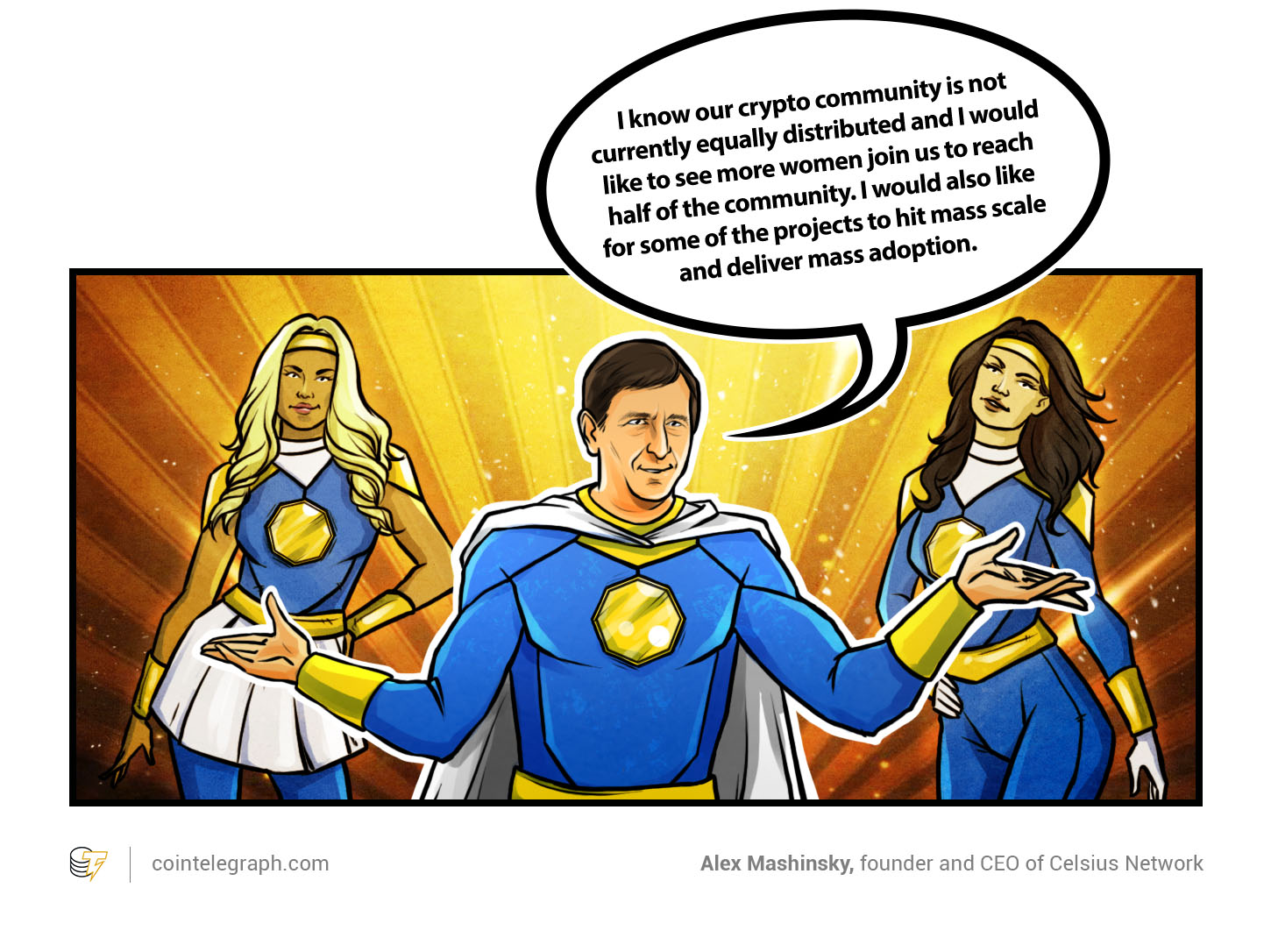 Now, a cautionary tale about Chrome extensions. Claims emerged this week that an unsuspecting victim lost $16,000 after installing an add-on for Ledger crypto wallets that actually contained malware. The extension, called “Ledger Secure,” reportedly passes seed phrases back to the add-on’s author, and is not an official product. Ledger itself appears to have confirmed this in a tweet that warned its followers about a phishing alert.

A French businessman has been indicted for allegedly stealing BTC worth 1 million euro from his former colleagues in a so-called “act of revenge.” The unnamed entrepreneur is accused of taking a total of 182 BTC — reportedly driven by a motivation to “wash away the humiliation” of being made redundant. It is claimed that he ensured each of his fraudulent BTC transfers was for an amount that wouldn’t trigger an internal security warning. This insider knowledge helped investigators realize that a current or former employee was responsible. The suspect is now subject to travel restrictions, and prosecutors are seeking him to be kept in custody until his trial.

“Cryptocurrency will not die” — Mainstream media on Bitcoin in 2019

The Bitcoin frenzy in late 2017 may have died down, but mainstream media interest in cryptocurrencies has not. Stephen O’Neal looks at the main highlights of Bitcoin and blockchain coverage from newspapers and broadcasters during 2019.

So, 2019 was a year of rapid growth and expansion for digital currencies — piquing the interest of governments and corporations alike. Here, Ana Alexandre finds out what industry leaders and key influencers are hoping for in the coming 12 months.

How blockchain can improve globalization

The birth of blockchain technology and its quick adaptation have left many people stunned. Here, Oluwatobi Joel explores how it can improve globalization — enhancing interactions between people, companies and governments worldwide.

Hacker Noon Is Storing Content on a Blockchain After Ditching Medium

Notes From the WEF: The Coming Battle Between Surveilled and Private Money

Ray Dalio Calls for Investment Diversification, But Not in Bitcoin