Stairway to Scarcity: Bitcoin Sentiment to Rise Despite Halving Impact 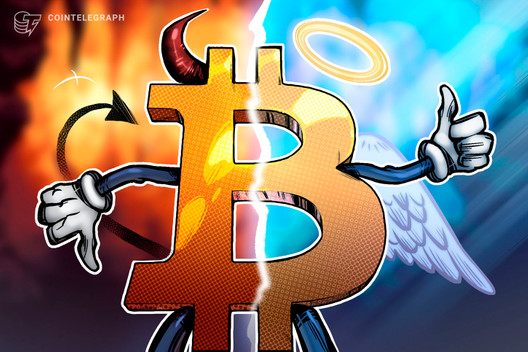 Post-halving scenario on Bitcoin’s long-term market trust and reputation seems quite positive according to crypto pundits.

With Bitcoin’s (BTC) fourth halving just four days away, members of the global crypto community are eager to see how the event pans out monetarily for the flagship crypto asset. Historically speaking, the halving has almost always had a positive impact on Bitcoin’s price, but this time around, many experts believe that any potential value surges may have already been priced in.

It bears mentioning that the halving will most likely have the biggest impact on miners, as the reduced reward ratio following the event will rapidly alter their profit streams, forcing small-time players to either adjust their operations accordingly or shut down completely.

Not only that, some pundits have commented that the aforementioned “supply shock” could compromise the security of Bitcoin by causing a rapid drop in miner hash power. In this regard, Alex Heid, the chief research officer at SecurityScorecard — an information security company that rates the cybersecurity risks of corporate entities — believes that ransomware attacks will increase as a result of the halving, with miscreants most likely making use of known vulnerabilities and phishing as a means of deployment. So, how is the upcoming halving going to impact BTC’s overall market sentiment and trust?

With the coronavirus pandemic currently sweeping the globe, it appears as though more people may be turning to believe that their local monetary systems have some flaws, especially as central banks such as the United States Federal Reserve continue to print an increasing amount of fiat currency as part of its quantitative easing efforts.

Additionally, many governments have made a major push to increase the adoption of digital payment systems as well as other contactless payment mediums to adhere to social distancing measures that have been deemed essential during this time.

Owing to the fact that the aforementioned COVID-19 crisis coincides with the BTC halving, the premier cryptocurrency’s image seems to have improved somewhat in the eyes of investors, who are now beginning to gain a more in-depth understanding of Bitcoin’s self-deflationary and decentralized design. Commenting on the subject, BlockFi co-founder and CEO Zac Prince told Cointelegraph that the halving is a “perfectly timed opportunity for Bitcoin,” adding:

“Current market dynamics are driving a bolstered interest on digital currency for the long run that go beyond a rudimentary understanding of the rules of supply and demand. Historically, past halving events have always resulted in an eventual upswing of BTC.”

Prince further opined that with the Fed printing money to keep the economy afloat, more and more Americans have started to flock toward Bitcoin as a store of value — thus showcasing their long-term trust in the digital commodity. Not only that, he also believes that because Bitcoin was able to successfully bounce back from its pandemic-induced losses recently, an increasing number of people are now beginning to accumulate it in order to diversify their existing portfolios. He added:

“As more people see its value, on top of ongoing peripheral retail pressure, we believe we will see the price of Bitcoin will rise steadily, and at times rapidly, over the next few years.”

Lastly, Bitcoin’s steadily growing market reputation is cemented by the fact that countries like India, Nigeria and Lebanon have witnessed an increasing amount of crypto adoption — especially as stock markets around the world have incurred substantial losses over the past month and a half. And while in the past, people have tended to flock to the U.S. dollar as a safe haven, the dollar itself is potentially facing uncertain times, causing an increased number of people to take refuge in different offerings to protect their wealth.

Institutions to capitalize on crypto post-halving?

Another interesting discussion that has piqued the interest of many is whether the upcoming halving will help lure in more institutional players — especially if BTC starts to surge steadily following the event. In this regard, common sense suggests that if Bitcoin does, in fact, witness a dramatic increase in its value, the asset could join the company of scarce commodities like gold that investors believe can not only serve as good stores of value but also provide investors with a means of hedging economic risks associated with black swan events such as the coronavirus crisis.

Providing insight on the matter, John Cantrell, CEO of Juggernaut — a messenger service built on Bitcoin and Lightning Network that offers end-to-end encryption — told Cointelegraph that as per his research, a whole host of forward-looking institutions have already made moves to understand the value proposition that Bitcoin provides and have therefore invested in the asset. However, for the big-name players who haven’t really paid attention to BTC, Cantrell believes that the upcoming halving provides them with a perfect avenue for exploration.

Similarly, Prince believes that the crypto market is now ready for an influx of institutional money. On the subject, he highlighted that as things stand, an incredible amount of infrastructure has already been established for retail and institutional investors to own Bitcoin:

“Traditional fintech retail platforms like Square, SoFi and Robinhood have made purchasing Bitcoin available on their platform, and firms like Fidelity and Grayscale are building products to support institutional adoption.”

However, a somewhat contrary opinion is held by Checkmate, co-host of the Rough Consensus podcast and a research contractor for the open-source, autonomous digital currency Decred. He believes that the current volatility and lack of liquid derivative infrastructure to hedge risk has kept big-name institutional players from entering this market, telling Cointelegraph, “Institutions will come when the financial infrastructure and size make Bitcoin an invest-able asset class. The halving likely has little to do with this.”

Amid the global economic uncertainty, it seems as though cryptocurrencies have been steadily gaining an air of trust and legitimacy around them. In this regard, eToro analyst Mathew De Corrado told Cointelegraph that since the last halving event in 2016, his company has seen an influx of clients looking to add Bitcoin to their portfolio.

He also pointed out that a lot of eToro customers have shown greater interest in cryptocurrency as a result of the increased economic stimulus added by governments across the globe, especially because a vast majority of crypto investors tend to see these assets as a hedge against potential future inflation and the depreciation of their local currency. De Corrado closed out by saying:

“Trust in crypto assets, in my opinion, will largely stem from increased visibility in the public eye, from governmental organizations, increased regulation and/or oversight, and also from increased demand from institutional investors.”

Lastly, Cantrell stated that as more people realize Bitcoin has a fixed supply as well as a known production schedule — meaning the asset can’t be inflated at will — their confidence and sentiment toward crypto will increase at a rapid rate.

With the halving fast approaching, it remains to be seen how BTC’s public perception will change after the event, given that the currency may be subject to a price surge or a decline in the short term. If Bitcoin is able to stay on an upward ascent, it would help embed the narrative that Bitcoin is not only a potential long-term investment avenue but also a means of hedging economic risks that are usually witnessed when traditional markets tumble and fall as a result of unfavorable market conditions.

On the other hand, if Bitcoin’s value starts to slide after the halving, investor confidence may be influenced, but when considering the current market situation, this effect may not be long-lasting.

Speaking on this issue, De Corrado believes that irrespective of how BTC’s financial future plays out after the halving, the currency’s reputation will most likely remain unaffected. However, he did concede that if a volatile future is in store, it might present investors with an opportunity to trade on what will likely be increased volatility, in anticipation of the cut to the supply side of the equation. He concluded:

“For context, Bitcoin had one of the biggest weeks of the year, up approximately 19.2% for the week ending Sunday. With such a significant rise in just a single week, the big question will be how much of the halving event caused that rise, and what can investors expect to see in the coming 14-day period?”

Louisiana Might Soon Offers a License to Bring Crypto Business Back