However, SNX withdrawals from Synthetix pools picked up momentum during the price boom.

SNX spiked to its three-week high on Monday in reaction to a market-wide upside correction led by Bitcoin (BTC) and other top-cap digital assets.

The Synthetix project's native token reached $9.59 after rising four days in a row by up to 50%. That included a sharp 18.29% upswing in the previous daily session, sparked by Bitcoin's climb above its key resistance level of $35,000. Altcoins tend to tail the flagship digital asset's price trends. 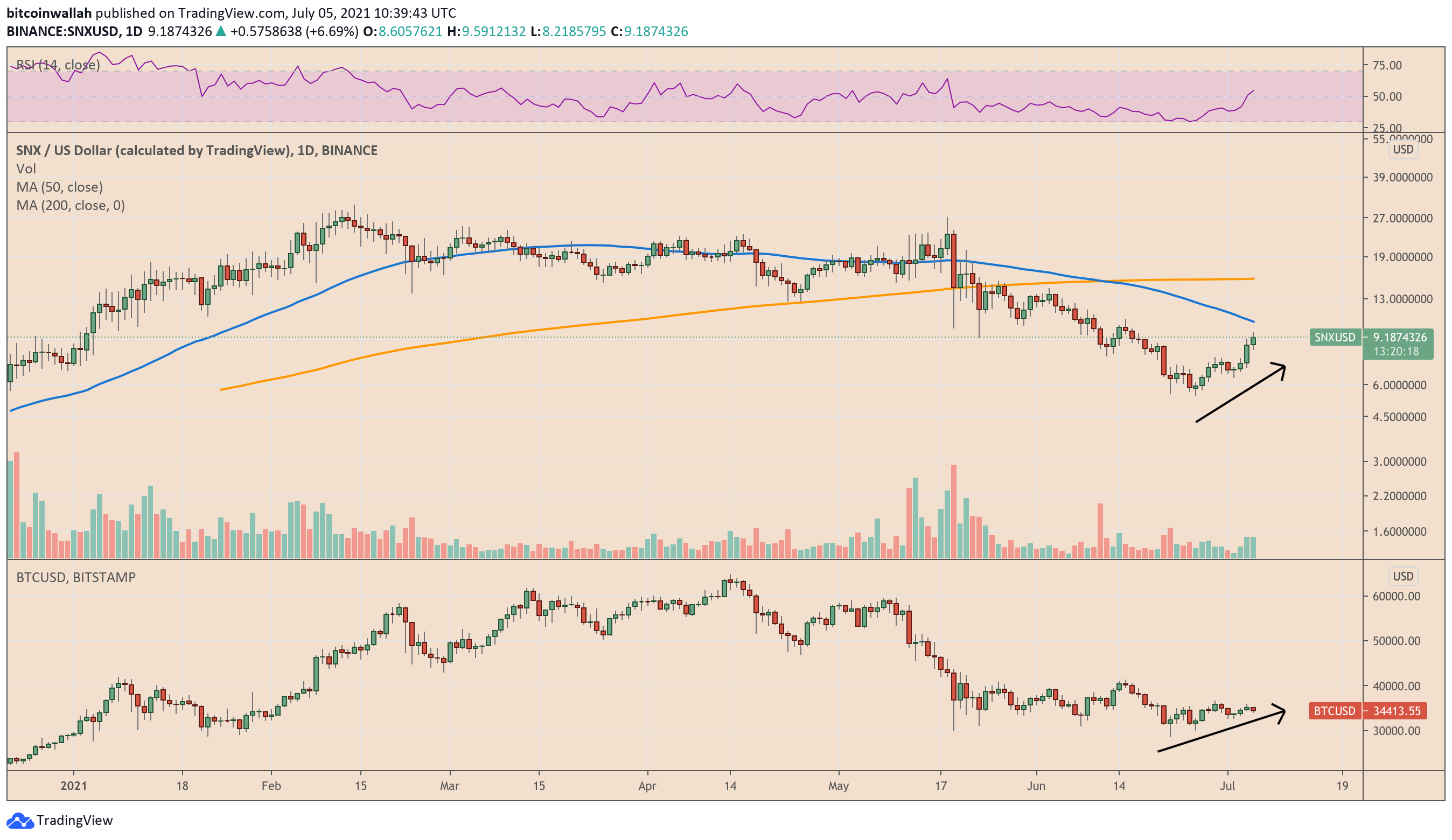 But more factors were in play during the SNX's comparatively higher price boom. Its jump appeared as speculators returned to bet bullishly on the overall decentralized finance (DeFi) ecosystem. The seven-day adjusted timeframe saw almost every top DeFi coin posting double-digital gains, including Uniswap (~16%), Aave (~24%), Compound (39.37%), amongst many others.

SNX/USD surged about 31% in the previous seven days. 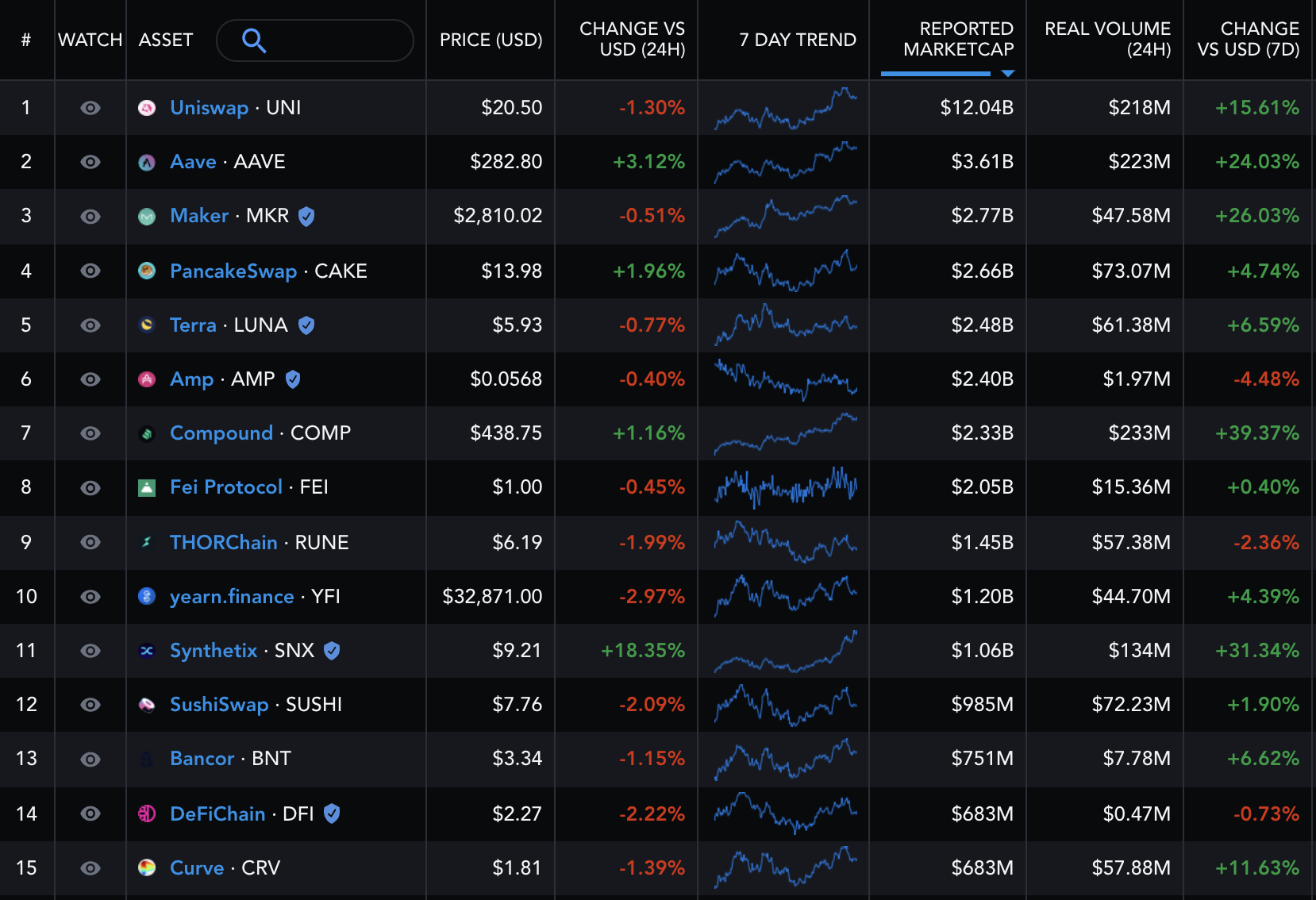 Synthetix was among the only DeFi coins in profits based on a 24-hour adjusted timeframe. Source: Messari

Ether (ETH), which hosts most DeFi projects atop its public blockchain, also saw its ETH token rising by more than 10% in the previous seven days.

Meanwhile, VORTECS™ data from Cointelegraph Markets Pro began to detect a bullish outlook for SNX in early July, prior to the recent price rise. 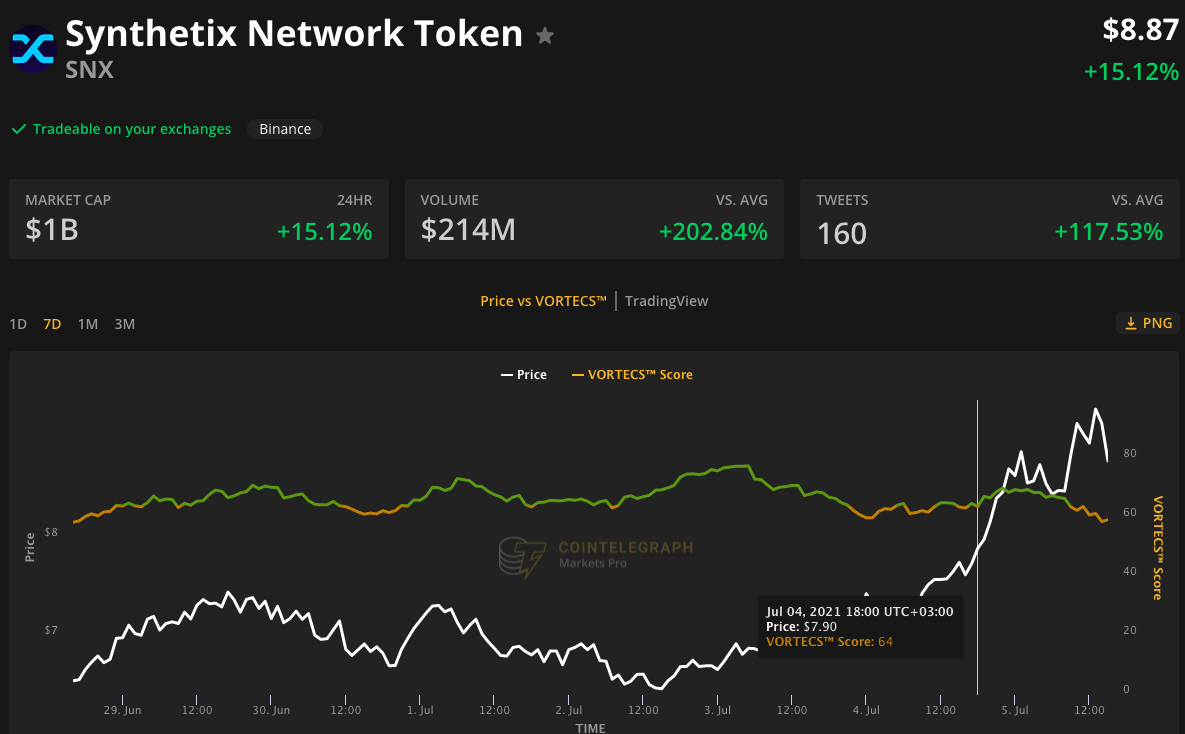 As seen in the chart above, the VORTECS™ Score flashed green on July 4 with a score of 64 with the price continuing to climb higher above $9.

The 50% upside move in the SNX markets also pushed the total value locked inside Synthetix pools to $11 million shy of $1 billion. Nevertheless, as the TVL reserves rallied in terms of the U.S. dollar, they declined on the SNX token basis, dropping by almost 5 million units from the July 1 high of 116.25 million units. 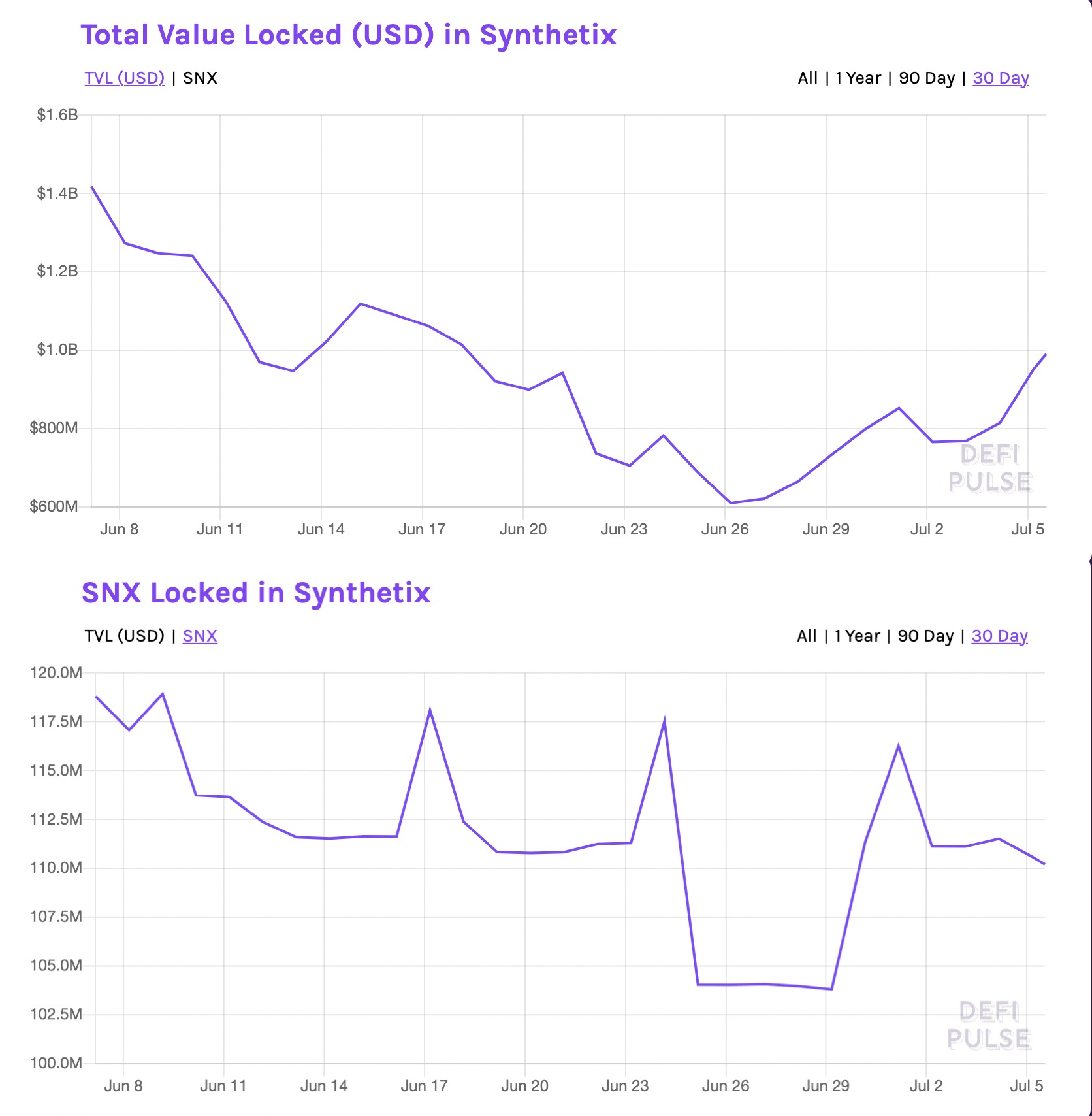 In detail, Synthetix is a decentralized synthetic asset platform that provides blockchain exposure to traditional assets, including currencies, commodities, stocks, and indices. The platform requires users to lock its native token SNX as collateral into its smart contracts to back its synthetic assets (Synths). These Synths track prices of various assets, which allow crypto users to trade peer-to-contract on Synthetix Exchange.

Additionally, users have to burn the portion of their Synths as debt when they wish to unlock their SNX. At its all-time high, in December 2020, the Synthetix smart contract had 168.37mm SNX tokens. The holdings fell to as low as 96.54 SNX tokens in February 2021. Since then, the deposits have been rising, albeit not in a straight line.

Part of the reason behind rising Synthetix TVL could be higher annualized percentage yields (APY). For example, the SNX staking returned users with 39.30% APY as of Monday, using Synthetix's inflationary supply model. Thus, SNX yields come out to be much higher than a traditional yielding asset (the U.S. 10-year Treasury note returning only were limited to 0.502-1.778% in the previous 52 weeks.)

SNX staking APY (with sUSD and SNX as base unit) is at 48.64% per annum. Source: Synthetics Official Website

The latest SNX pump has pushed its prices above a classic technical range defined by $7 support and $8.5 resistance. Historically, SNX/USD have twice tested the area as resistance but was managed to break only once in December 2020-January 2021. 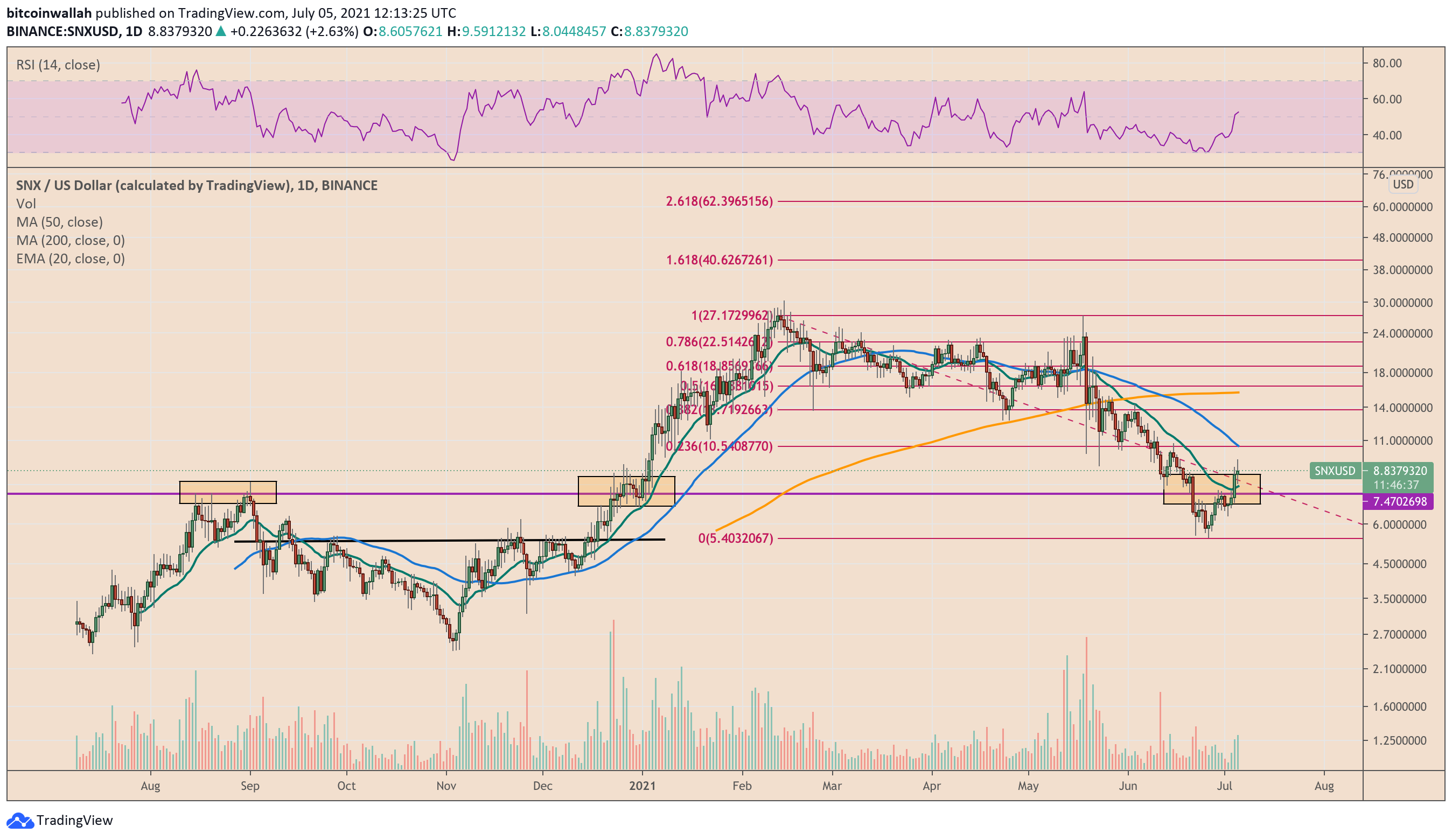 The Sythentix token eyes a breakout above $10.54. Source: TradingView.com

A breakout from the range puts SNX/USD en route to the next level of resistance near $10.54, which coincides with the 23.6% Fib line of the Fibonacci retracement setup drawn from a $27.172-swing high to $5.40-swing low. The $10.54 is near the SNX's 50-day simple moving average (50-day SMA; the blue wave), creating a strong resistance confluence to cap the pair's potential upside attempts.

Conversely, a breakdown below the $7-8.5 range risks crashing SNX back to its previous sessional low of $5.40.