Shanghai Special: Crypto crackdown fallout and what happens next 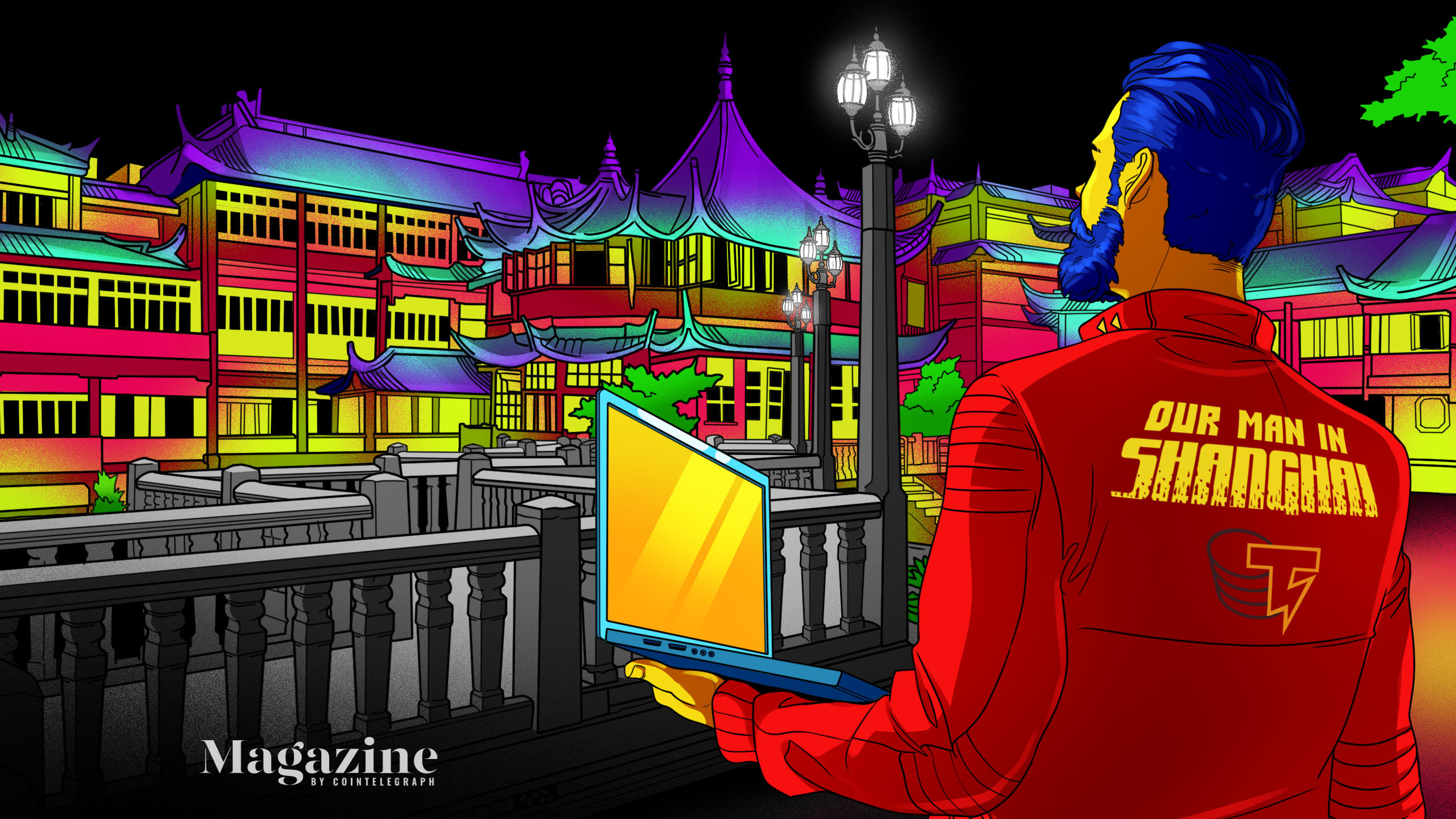 The summer of regulatory action has now become a global phenomenon. Lawmakers and politicians are waving their fingers and making threats toward the industrys leading virtual asset service providers a term coined by the FATF to describe exchanges, wallets, custodians and even DeFi platforms.

But when it comes to crackdowns on cryptocurrency, few places do it with the effectiveness and experience of the Chinese government.

Unlike in the United States, Chinas regulators are not having a public discourse about it. Decisions are made behind closed doors, and announcements come swiftly, posted on government websites or in speeches from well-primed officials.

The directives come from the very top and are swiftly reiterated and enforced by lower-level officials in provincial- or city-level government, by state-owned enterprises and by financial institutions. This top-down style of regulation tends to make the “China ban” seem very repetitive and severe. In reality, the same regulation can be repeated dozens of times by different branches, scaring the public but having very little additional impact on the industry.

3000 kilos of #bitcoin miners packing to be airlifted to the US. pic.twitter.com/d07y5GUBB3

What’s the issue this time around?

Although owning cryptocurrency has never been officially banned, the need for reform in other areas of the industry was probably present. According to Winston Ma, former managing director and head of North America at China Investment Corporation, the Chinese government has pushed the regulations with the aim of protecting consumers, becoming closer to carbon neutrality targets and achieving greater financial stability.

While the last reason is more subjective, theres no denying that Chinas opportunistic mining industry and speculation-heavy retail investors were running largely unchecked at the beginning of the year.

Ma will be among the first to note the effectiveness of the changes taking place, especially for the mining industry, telling Magazine:

So far, the impact from the energy perspective is the most obvious: After the central government initiated the cryptocurrency crackdown campaign in May, major coal-based power producers such as Inner Mongolia and Xinjiang, which were previously the top two cryptocurrency mining hubs in China, have been among the first regions that quickly developed local rules to clean up mining businesses.

This wont be a short-term adjustment. Most large mining firms have moved abroad, and the overall BTC mining hash rate is still down by around 40% from the highs of the spring, prior to the crackdown. Energy and climate policies were the focal point of Chinas all-important five-year plan that was released this spring, cementing the importance of cleaner energy consumption for the foreseeable future.

Despite its significance to the crypto community, mining is not much of a contributor to the national GDP. Revenue for Chinese miners was just shy of $7 billion for the 12-month period leading up to June, a number far too insignificant to move the needle for the government.

The revenue of ride-sharing app Didi was by itself over three times that in 2020, and the Chinese government had very few hesitations about cracking down on it after it emerged that it had provided user data to U.S. regulators. Didi apps were removed from domestic app stores, and now competitors are lining up to fill a massive market share should Didi fail to resolve its legal issues. Although Chinese miners were raking in money, it wasn’t anywhere near enough to stave off regulation from the government (data from June 2021)

Sally Wang, vice president of portfolio marketing at Sino Global Capital, notes that despite Chinese regulators not tolerating risk areas that threaten financial stability, theres been a huge increase in blockchain use cases at national, regional and city levels.

This type of development has allowed players to continue contributing to a healthy blockchain ecosystem in China, with local governments supporting major events like the World Blockchain Conference in Hangzhou and the upcoming Shanghai International Blockchain Week in September.

Crypto leaders are obsessed with life extension. Here’s why

Is the cryptocurrency epicenter moving away from East Asia?

Who takes gold in the crypto and blockchain Olympics?

Is Bitcoin a religion? If not, it soon could be

Regulator influence on the decline

The original crackdown that banned ICOs and exchanges in 2017 caught the crypto industry at a vulnerable time. The majority of worldwide trading volume at the time originated from China or happened on Chinese exchanges, and the large ones were registered and based within the mainland. This left them at the mercy of authorities and taught the industry a valuable lesson about managing geographic risk.

After that, key industry players such as Binance, Huobi and OKEx began setting up in places like Hong Kong and Singapore, where regulators were more open-minded. Subsequently, these exchanges are now slightly removed from the jurisdiction of the Chinese government, provided they arent too conspicuous when recruiting Chinese users. 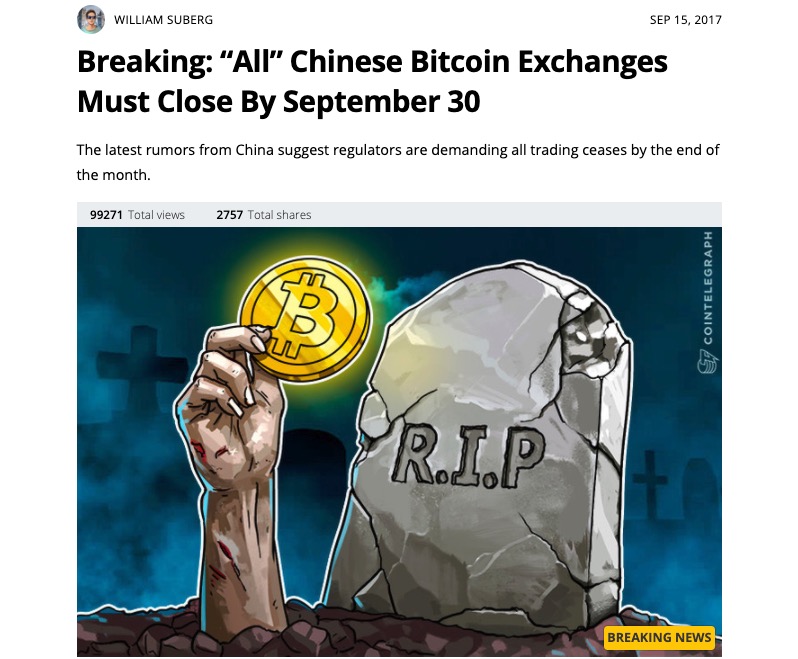 Throwback to 2017: This Cointelegraph graphic shows how fearful the industry was after the future of many large exchanges was thrown in doubt.

As more and more of the industry shifts overseas, the impact of regulators is lessened. Unfortunately, miners who were keen to take advantage of low-cost energy from Chinas abundant hydropower and coal-powered plants were not as quick to decentralize. That left them in a precarious position, sparking a wave of panic after China cracked down on miners earlier this year. The good news for investors is that miners have now responded by also relocating abroad, reducing the need for any future negative regulation against the mining industry.

Reading the tea leaves with regulators

Retail trading is still a major uncertainty, as large, predominantly Chinese exchanges like Huobi and OKEx make up around 20% of global volumes, according to FTX’s volume monitor. Binance makes up over 50% of global volume and likely has a large percentage of Chinese users as well.

While users cant directly buy cryptocurrency with fiat on these platforms, P2P transactions still make it easy for savvy users to purchase on platforms like Binance, using Chinese bank accounts and commercial payment apps to transact between the yuan and stablecoins.

To this point, the government hasnt been successful in slowing this volume, even though bank accounts are occasionally frozen for transacting in P2P markets. The sheer volume of digital transactions makes this tough to monitor, but its possible that the government isnt that interested in eliminating these channels entirely. Completely shutting down exchanges and retail investors might be possible, but it would risk leaving China frozen out, without a horse in the race something China is reluctant to do.

Wang believes that exchanges that have large volumes coming from China will continue to adapt, telling Magazine: We think they are likely to follow the global trend towards stricter compliance, and as weve seen, they have already looked at limiting leverage and reducing the scope of products available for new users. Wang is referencing what occured earlier this year when exchanges like Huobi limited users’ access to futures, a popular but high-risk product that is often more akin to gambling than to investing.

Ma is not alone in worrying about what comes next. Many people in the Chinese community, including early entrepreneur Bobby Lee, have voiced similar concerns, especially after seeing regulatorstake aim at so many companies and individuals in China’s private tech sector this summer.

Should more action be taken against retail traders, many Chinese users might worry about their ability to cash out in the future, leading to more fear in the markets. The question then becomes whether or not scandals, scams and social unrest stemming from speculative investments could force the government to take action. The best bet for cryptocurrency holders is an increase in sustainable development that is more focused on technology. Surging prices on meme tokens like Dogecoin and Shiba Inu might be attractive to short-term traders, but they increase the likelihood that the government will put pressure on retail users and the exchanges that service them.

One Chinese proverb to take wisdom from is the idea of killing the chicken to scare the monkey.

In this story, a man slaughters a chicken to teach his prized dancing monkey a lesson. By comparison, Chinas regulators wont balk at squashing a corporation if it means that others will fall into line.

The international crypto community should hope that Chinas leading projects are able to navigate these new policies unscathed and continue building a healthy blockchain ecosystem. Chinese entrepreneurship has consistently produced the largest exchanges and major mining companies like Bitmain and Canaan, not to mention many leading venture captalists and investors who have helped to shape the industry. The next move from regulators might be an important one, as we may find out whether the top players become the chicken or the monkey.

Crypto leaders are obsessed with life extension. Here’s why

Is the cryptocurrency epicenter moving away from East Asia?

Who takes gold in the crypto and blockchain Olympics?

Is Bitcoin a religion? If not, it soon could be