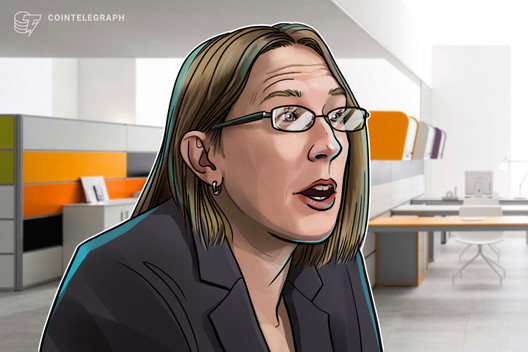 In a recent panel, SEC Commissioner Hester Peirce AKA CryptoMom opened up about the prospect of a digital dollar as well as the end of her term, coming in June.

A noted crypto defender at the United States Securities and Exchange Commission has spoken to the end of her term scheduled for June, as well as the relationship between a potential digital dollar and independent crypto.

A digital dollar and other stablecoins

In an April 28 webstream with Crypto Finance Conference St. Moritz, Commissioner Hester Peirce, sometimes known as CryptoMom, addressed the increasingly visible role of a potential digital dollar, but doubted that it posed a threat to digital currency in particular.

“It’s a natural progression that they’re going to think ‘hey, should we digitize our currency, and if so will that be good or bad for our ability to play our role as a central bank,’” said Peirce. “I don’t think that means that other types of digital currencies that are privately developed are going to disappear.”

There are, however, issues of trust and privacy at play with central bank digital currencies:

“You need to think about privacy issues if you’re creating some sort of digital currency. I think that’s a really important question for a society to ask because people don’t really feel comfortable with the government — or anybody else — monitoring their transactions.”

Peirce is scheduled to leave her post in June

In response to a question about the end of her term, which is coming in June, Peirce suggested that that may not be the end “You can stay on until they put someone else in your seat,” she said.

Peirce is the crypto industry’s most visible ally within the SEC, and so her coming departure concerns many. In response to a question about the community losing its CryptoMom, Peirce joked, “I think it should be a whole commission full of cryptoparents, not just one CryptoMom.” She continued to emphasize the role of level and clear regulation as more important than any one figure.

“It’s about setting clear rules and then saying, ‘now you guys, you do your thing,’” Peirce said. “Building structures that last beyond any particular person is what really matters.”

The curious case of stablecoins

Regarding stablecoins, Peirce said they pose an interesting challenge for regulators:

The subject of whether managed stablecoins are securities came to the fore with the announcement of Libra.

A major recent policy initiative from Peirce is her proposed safe harbor of three years for initial coin offerings, protecting them from pursuit as securities if they fill certain reporting requirements that fall short of full securities registration.