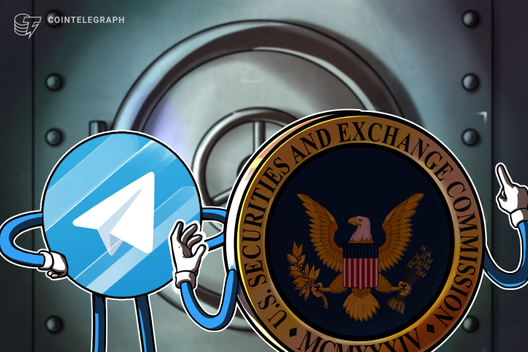 The SEC is renewing its request for Telegram’s bank records in connection to a 2018 ICO as evidence of commission-driven sale of tokens by third parties emerges.

The Securities and Exchange Commission is once again requesting that Telegram provide bank records on its Gram initial coin offering (ICO).

The timing of the request, filed on Jan. 10, coincides with new evidence of alleged underwriters requesting commission fees for the sale of Telegram tokens.

The reappearance of an earlier request

The request for banking data comes four days after a similar filing was declined “without prejudice” — meaning that the SEC was free to try again. Telegram challenged the request arguing that doing so would be a violation of foreign data privacy statutes. The commission sought to refute this argument by citing previous cases, noting that foreign privacy obligations were rarely an obstacle for depositions in U.S. federal cases.

In a conversation with Cointelegraph, Philip Moustakis, attorney at Seward & Kissel LLP and former SEC counsel, said that he believes “that the court will eventually require Telegram to turn over the bank records that the SEC seeks.”

The commission explained in its request that it seeks to obtain bank records to understand how Telegram spent its ICO funds:

“There is no question that Telegram’s bank records are of critical relevance to this litigation. Defendants are correct that Howey mandates an objective test to determine whether investors in Grams had reasonable expectations of profits from their purchase. But it is equally true that post-investment actions by the parties ‘can serve as evidence’ of the parties’ expectations.”

Moustakis continued to explain that the existence of these filings indicated disagreement between Telegram and the SEC, saying “Discovery disputes only get to the courts when there’s a problem.” He elaborated that the final resolution of the issue of these bank records may well happen between the two parties outside the court.

The SEC began action against Telegram’s $1.7 billion ICO in Oct. 2019. The commission argues that the token offering was an unregistered sale of securities, while Telegram maintains that it was exempt from registration due to several legal details.

Documents obtained by Cointelegraph show that the commission filed previously unseen evidence on the same day of the bank record request.

The evidence shows two third-party companies invoicing Telegram for fees deriving from Gram token sales to external investors. This evidence, if confirmed, would mean that these companies acted as underwriters for the ICO — a clear sign of a security offering.

It is unclear how the SEC obtained these documents. While they were not directly cited in the request for bank records, they may have emboldened the commission to push forward with the case.

The filing alleges that Telegram previously showed lack of good faith in the discovery process, which it argues “may weigh in favor of the SEC.” The attorneys referenced an Oct. 2019 request for all third party agreements relating to the Telegram Open Network (TON) blockchain, which were produced only on the day of the filing on Jan. 10.

While there are no indications of when the court will convene on the matter, the lawsuit is likely to continue progressing. Meanwhile, Telegram remains unable to launch the TON blockchain, delaying what was already considered a late start.