Robinhood encountered another technical outage on Monday, causing its platform to halt trading services, according to a March 9 tweet by Robinhood’s support team.

Robinhood partially fixes the outage after an hour of downtime

The firm announced earlier on the day:

“Trading is currently down on Robinhood and we’re investigating the issue. We’re focused on getting back up and running as soon as possible and we’ll update the status page with the latest.”

Subsequently, Robinhood has partially restored trading, noting that they are working to get the platform back up and running fully. According to online reports, the platform was partly functional after just an hour of downtime.

As of press time, Robinhood app is still experiencing issues with equities, options and cryptocurrency trading, according to Robinhood’s status page. According to the website,  Robinhood has already identified the issue and implemented necessary measures to fix the problem, while those trading services are experiencing “degraded performance.” 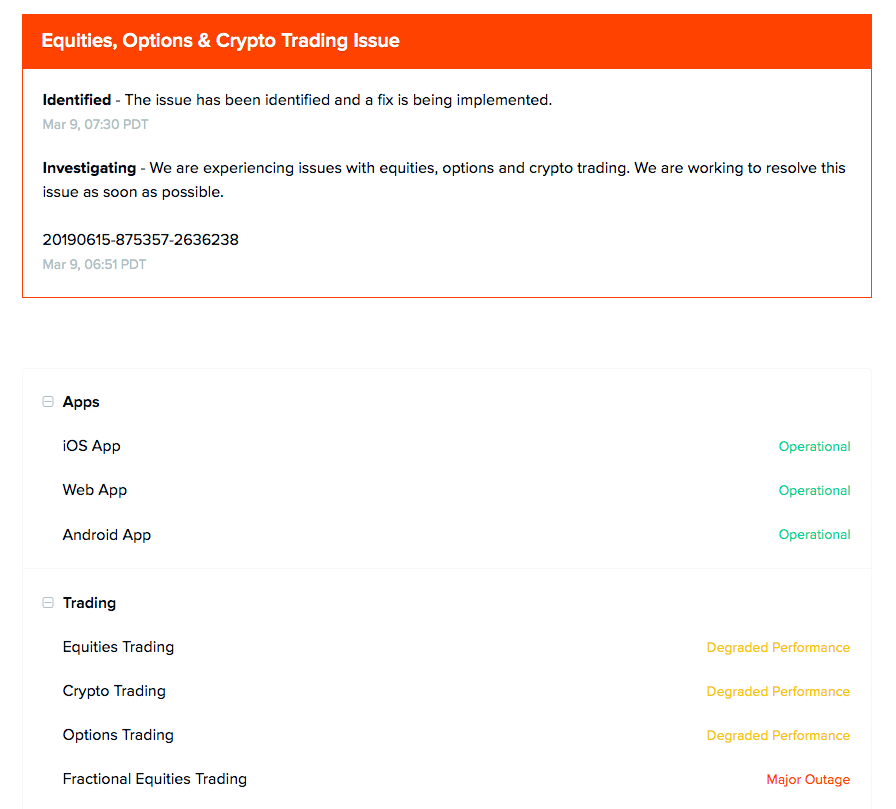 The latest outage on Robinhood follows a major technical problem that happened last week. As reported by Cointelegraph, the day-long outage on March 2 purportedly caused Robinhood users to miss out on the biggest one-day point gain in the Dow Jones history, with users apparently planning to start a legal class action against Robinhood.

According to a report by CNBC, a Robinhood client based in Florida filed a federal class lawsuit on March 4. The plaintiff, Travis Taaffe, reportedly alleges that Robinhood breached its contract by failing to “provide a functioning platform,” causing traders to be unable to transfer money while stock markets surged.

While some reports claim that Robinhood founders said that they would compensate investors impacted by the outage on a case-by-case basis, the company’s customer agreement outlines that Robinhood will not be responsible for outages on the platform.

“Although considerable effort is expended to make the Website, App and other operational and communications channels available around the clock, Robinhood does not warrant that these channels will be available and error free every minute of the day. I agree that Robinhood will not be responsible for temporary interruptions in service due to maintenance, Website or App changes, or failures, nor shall Robinhood be liable for extended interruptions due to failures beyond our control, including but not limited to the failure of interconnecting and operating systems, computer viruses, forces of nature, labor disputes and armed conflicts.”

As reported by Cointelegraph, a group of Robinhood clients that were unhappy about the technical outage brought together to create a twitter account in response to the damaging downtime. As of press time, the account has amassed over 7,400 followers. A spokesperson at Robinhood declined to comment on the Twitter initiative to Cointelegraph last week.