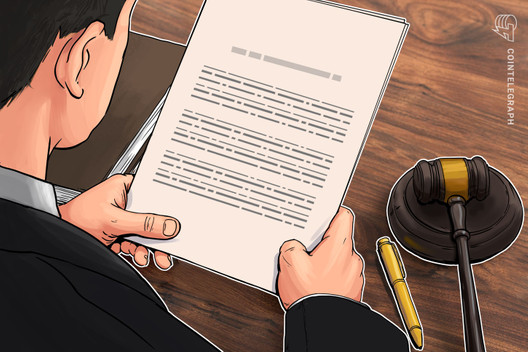 Attorneys for a company called Bitcoin Manipulation Abatement LLC have filed a lawsuit in a U.S. federal district court alleging Ripple misled investors and sold XRP as an unregistered security in violation of federal law.

According to court documents filed May 1, the mysterious entity with little online presence accused Ripple and its Chief Executive Officer (CEO) Brad Garlinghouse of raising more than a billion dollars through the sale and marketing of XRP as an unregistered security.

“...in order to drive demand for and thereby increase profits from the sale of XRP, Defendants have made a litany of false and misleading statements regarding XRP in violation of California’s securities laws, and false advertising and unfair competition laws.”

The same firm also filed a $150 million lawsuit against crypto derivatives exchange FTX in November 2019 which was subsequently dismissed one month later. High profile members of the crypto community like Binance CEO Changpeng Zhao expressed his thoughts on the lawsuit claims, calling them “very far fetched”.

The firm has faced its fair share of legal action, whether short lived or not, over its XRP token, currently the third most valuable by market cap. A class-action lawsuit brought in May 2018 — and currently moving forward — by attorneys for XRP investor Bradley Sostack has similar allegations of deceiving investors and violating securities laws.

While Sostack does seek damages and compensation for legal costs, one of his stated goals was the recognition of XRP as a security. However, an amendment filed on March 25 suggested he was hedging his bets on the possibility the court may not acknowledge it as such. The U.S. Securities and Exchange Commision (SEC) has not yet taken a position on the matter.