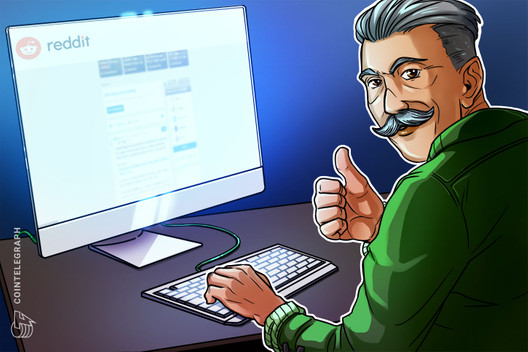 One of the largest online networks, Reddit, has announced a new community points system based on the Ethereum blockchain.

In a bid to create a more user-centric social media platform — “a free frontier” — Reddit has introduced its new community points system built on top of the Ethereum blockchain.

In a slide presentation shared Wednesday, May 13th, Reddit announced that Redditors will now be able to earn rewards in the form of ERC-20 tokens based on Ethereum blockchain for creating engaging content on the platform. This confirms claims that many users made in April about Reddit coming up with a blockchain-based reward system.

Users will have the freedom to either save their community points or utilize them to buy premium community features such as badges, custom emojis, and GIFs in comments.

Each user’s community points will be visible beside their username in the comments section to add more transparency regarding their activity and reputation on the platform.

According to the announcement, Reddit community members will exercise full control over community points. While Reddit karma will provide a basis of a user’s engagement within the community, the community will be the ultimate decision-maker as to who receives what amount of points for their contribution.

Reddit also assured users that it has no access or control over their community points, as points will be based on a blockchain and independently stored in users’ wallets “just like Bitcoin!”

“Neither Reddit nor moderators can take your Points away or decide what you do with them. It’s all up to you,” they wrote.

At present, the community point system is in its beta phase and is based on Rinkeby — an Ethereum testnet. During this period, Reddit will conduct experiments within Reddit communities to take inputs from community members and take a more wholesome approach towards finalizing how the reward system will work.

After the beta phase, Reddit will move the community point system to the Ethereum mainnet and all points of users will be carried over, which they will have to reclaim.

With more than 1.5 billion monthly visits, the integration of an Ethereum-based points system into Reddit could prove to be a major boon for the wider adoption of cryptocurrencies.