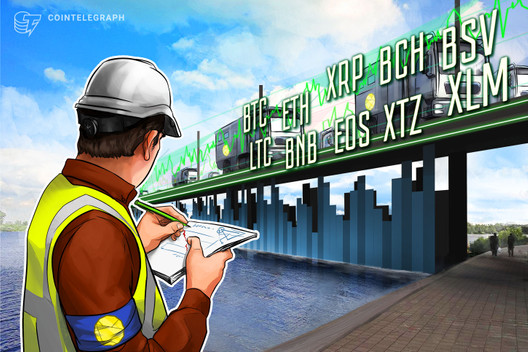 After Bitcoin’s rally, several major cryptocurrencies are attempting to resume their up move.

Billionaire hedge fund manager Paul Tudor Jones has added Bitcoin (BTC) to his portfolio. In a letter to his clients, Jones said that the top-ranked cryptocurrency on CoinMarketCap was likely to play a similar role to the one that was played by gold in the 1970s.

Jones added that Bitcoin was the fastest horse, hence, he was placing a bet on it. This move could attract other hedge fund managers to cryptocurrencies as they look to hedge their portfolios against the incessant money printing by the Federal Reserve.

Bitcoin’s recent rally above $10,000 is a major sentiment booster. The dominance of the largest cryptocurrency has rallied from under 61% in mid-Feb. to over 68%. This shows that traders’ interest has shifted from altcoins back to Bitcoin just before halving.

The only negative is that as Bitcoin crosses above $10,000 the sky-high target projections by analysts are again back on the table. Morgan Creek CEO Mark Yusko believes that Bitcoin could rally to over $100,000 between 2021 and 2022. Over the next 7-10 years, Yusko expects the Bitcoin rally to reach $400,000 to $500,000. Global Macro Investor CEO Raoul Pal is even more positive as he believes that Bitcoin has the potential to even reach $1 million.

Though the long-term fundamentals paint a very bullish picture, Bitcoin’s rally is likely to face stiff resistance at intermittent levels until it breaks out of its all-time highs. Therefore, traders should take it one step at a time instead of becoming too greedy.

Bitcoin (BTC) surged on May 7 and broke above the $9,456.77 resistance. The momentum carried the price above $10,000, which is a huge sentiment booster. Though the bears are defending the $10,000 level, they have not been able to sink the price below the previous resistance turned support of $9,456.77.

However, during strong bull runs, the markets can remain overbought for extended periods of time. Therefore, if the momentum sustains, the bulls might propel the pair above the symmetrical triangle. If successful, it would be a huge positive and could signal the possible start of an extended bull run.

Alternatively, as the pair is overbought, a few days of consolidation or a minor correction cannot be ruled out from the current levels. If the bulls can sustain the price above $9,456.77 during the pullback, it will increase the possibility of a rally to $10,500 and then to the long-term downtrend line of the symmetrical triangle.

The bears are likely to aggressively defend the zone between $10,500 and the downtrend line. Therefore, traders can tighten their stops if the pair starts to turn down from this zone. The first sign of weakness would be a break below $9,000. Therefore, the traders can trail the stops on the remaining long position to $9,000.

The upsloping moving averages and the RSI above 60 levels suggest that bulls have the upper hand. The 2nd-ranked cryptocurrency on CoinMarketCap is likely to pick up momentum on a break above the channel.

As long as the price remains inside the upper half of the ascending channel and the 20-day EMA slopes up, the possibility of a breakout above the channel remains high.

A break below the 20-day EMA will be the first sign that the bulls are losing their grip. The trend will shift in favor of the bears if the ETH/USD pair plummets below the support line of the channel. The traders can trail their stops on the long positions to $185.

XRP has been trading between $0.20570-$0.22281 for the past four days. This shows a balance between buyers and sellers. However, this tight range trading is unlikely to continue for long.

Conversely, if the bears sink the 3rd-ranked cryptocurrency on CoinMarketCap below the support at $0.20570, a drop to $0.17372 will be on the cards. Therefore, traders can protect their long positions with stops at $0.20.

Bitcoin Cash (BCH) dropped to an intraday low of $226.90, which triggered the stop-loss on the long positions suggested in the previous analysis. However, the bears could not capitalize on this break and drag the altcoin lower.

The 5th-ranked cryptocurrency on CoinMarketCap bounced from the lows and closed (UTC time) above $250. This suggests strong demand at lower levels. If the bulls sustain the price above the downtrend line, a move to $280.47 is possible.

Conversely, if the BCH/USD pair turns down from the current levels and breaks below $226.90, a drop to $200 is likely.

Bitcoin SV (BSV) again bounced from just below the 20-day EMA (201) on May 7. This is a positive sign as it shows that the bulls are defending this support.

Currently, the 6th-ranked cryptocurrency on CoinMarketCap is range-bound between $227-$187.16. Both moving averages are gradually sloping up and the RSI is in the positive territory, which suggests that the bulls have a slight edge.

On the other hand, if the bears sink the BSV/USD pair below $187.16, a drop to $170 is possible. This is a strong support, hence if the pair bounces off this level, it can also offer a buying opportunity.

Litecoin (LTC) bounced off the $43.67 support on May 7 and climbed back above the 20-day EMA. This is a positive sign as it shows demand at lower levels. The bulls will now try to push the price above the downtrend line.

If successful, a rally to the $50-$52.2803 resistance zone is possible. Above this zone, the momentum is likely to pick up.

On the other hand, if the 7th-ranked cryptocurrency on CoinMarketCap turns down from the downtrend line and plummets below the 50-day simple moving average ($42.5), a drop to $36 is possible. The traders can retain the stops on the long positions at $42.

Binance Coin (BNB) bounced off the 20-day EMA ($16.47) on May 7, which suggests that the bulls are defending this support. However, the bulls are facing stiff resistance at the downtrend line.

A break above the downtrend line will be the first sign of strength. Above this level, the 8th-ranked crypto-asset on CoinMarketCap can rise to $18.1377. If this level is crossed, the momentum is likely to pick up, which can result in a rally to $21.50.

EOS closed (UTC time) below the uptrend line on May 6, which was a negative sign. However, the bulls purchased the dip close to the 50-day SMA ($2.53) on May 7 and pushed the altcoin back above the uptrend line.

The 9th-ranked cryptocurrency on CoinMarketCap is currently facing stiff resistance at $2.8319. If the bears sink the price below the 50-day SMA, a drop to $2.3314 is possible.

Tezos (XTZ) has failed to break above the $2.8424 resistance for the past few days. This suggests that the bears are aggressively defending this resistance. On the downside, the bulls are attempting to keep the altcoin above the $2.55900337 support.

This tight range trading is unlikely to continue for long. Soon, the 10th-ranked cryptocurrency on CoinMarketCap will either breakout or breakdown of the tight $2.8424-$2.55900337 range.

Stellar Lumens (XLM) bounced off the uptrend line on May 7, which suggests buying on dips. Currently, the bulls are attempting to sustain the price above the overhead resistance at $0.073434.

If successful, the 11th-ranked cryptocurrency on CoinMarketCap can rally to $0.088311. This level is a major resistance, hence, a few days of consolidation or a minor correction is possible from this level.

Conversely, if the XLM/USD pair turns down from the current level and breaks below the downtrend line, a drop to the 20-day EMA ($0.066) is possible. This is likely to act as a strong support. If the pair bounces off the 20-day EMA, the bulls will make one more attempt to resume the up move.