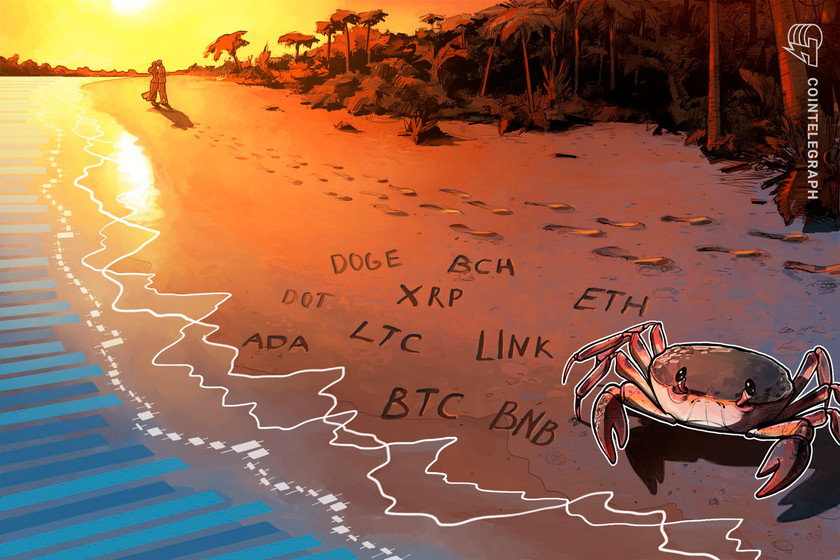 Ethereum's increasing dominance has kept traders focused on altcoins but Bitcoin's struggle to hold above $59,000 could send the entire market tumbling.

The astronomical rally in Ether (ETH) is not showing any signs of slowing down. The bulls easily cleared the overhead hurdle at $4,000 today, which also pushed the biggest altcoin’s market dominance to over 19%.

It is not only Ether that is witnessing sharp buying from traders. Litecoin (LTC) and Cardano (ADA) have also risen new all-time highs, suggesting a broad-based altcoin rally.

However, Bitcoin (BTC) seems to have lost its momentum as it continues to struggle near the $60,000 mark. That has pulled its market dominance to below 44% for the first time since July 2018.

However, the recent underperformance of Bitcoin has not shaken the long-term bulls. Morgan Creek Capital Management founder and CEO Mark Yusko recently said in an interview with CNBC that Bitcoin will rival the “monetary value” of gold.

“If gold’s monetary value is $4 trillion, then digital gold should move up to that total,” Yusko added. That means Bitcoin will have to rise to $235,000 in the future to fulfill Yusko’s prediction.

Let’s analyze the charts of the top-10 cryptocurrencies to spot the critical support and resistance levels.

Bitcoin has been sandwiched between the moving averages and the $58,966.53 resistance for the past two days. This tight range trading suggests a status of equilibrium between the bulls and the bears. 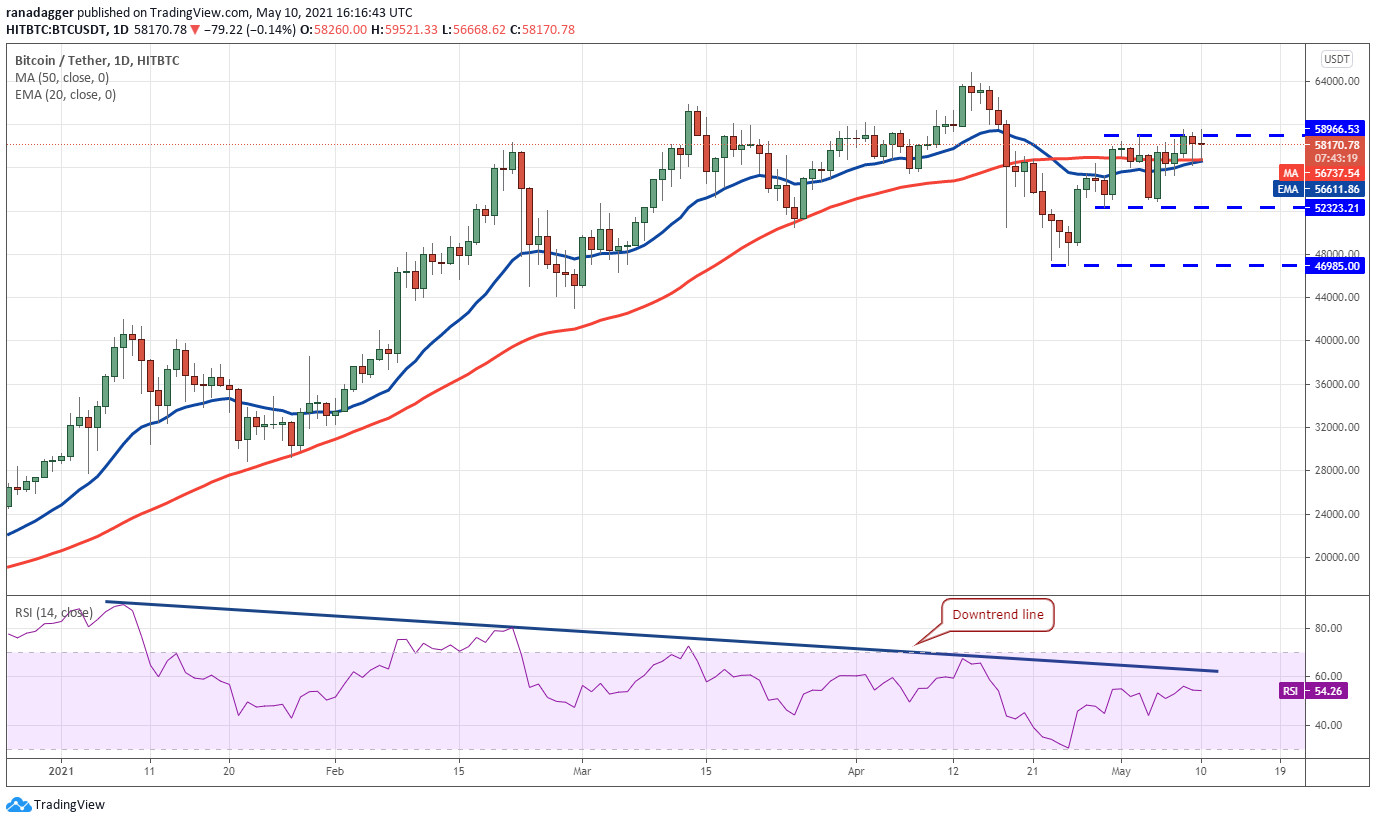 The gradually rising 20-day exponential moving average ($56,611) and the relative strength index (RSI) near the midpoint suggest a balance between supply and demand.

This balance may shift in favor of the bulls if the price sustains above $58,966.53. That could result in a march to the all-time high at 64,849.27. A break above this resistance may signal the resumption of the up-move.

Conversely, a break below $52,323.21 may indicate the start of a deeper correction to $46,985. A break below this support could trigger panic selling.

Ether’s rally has continued unabated. After forming a Doji candlestick pattern on May 9, the bulls have asserted their dominance today and pushed the price to a new all-time high. The sharp rally of the past few days has pushed the RSI above 83. 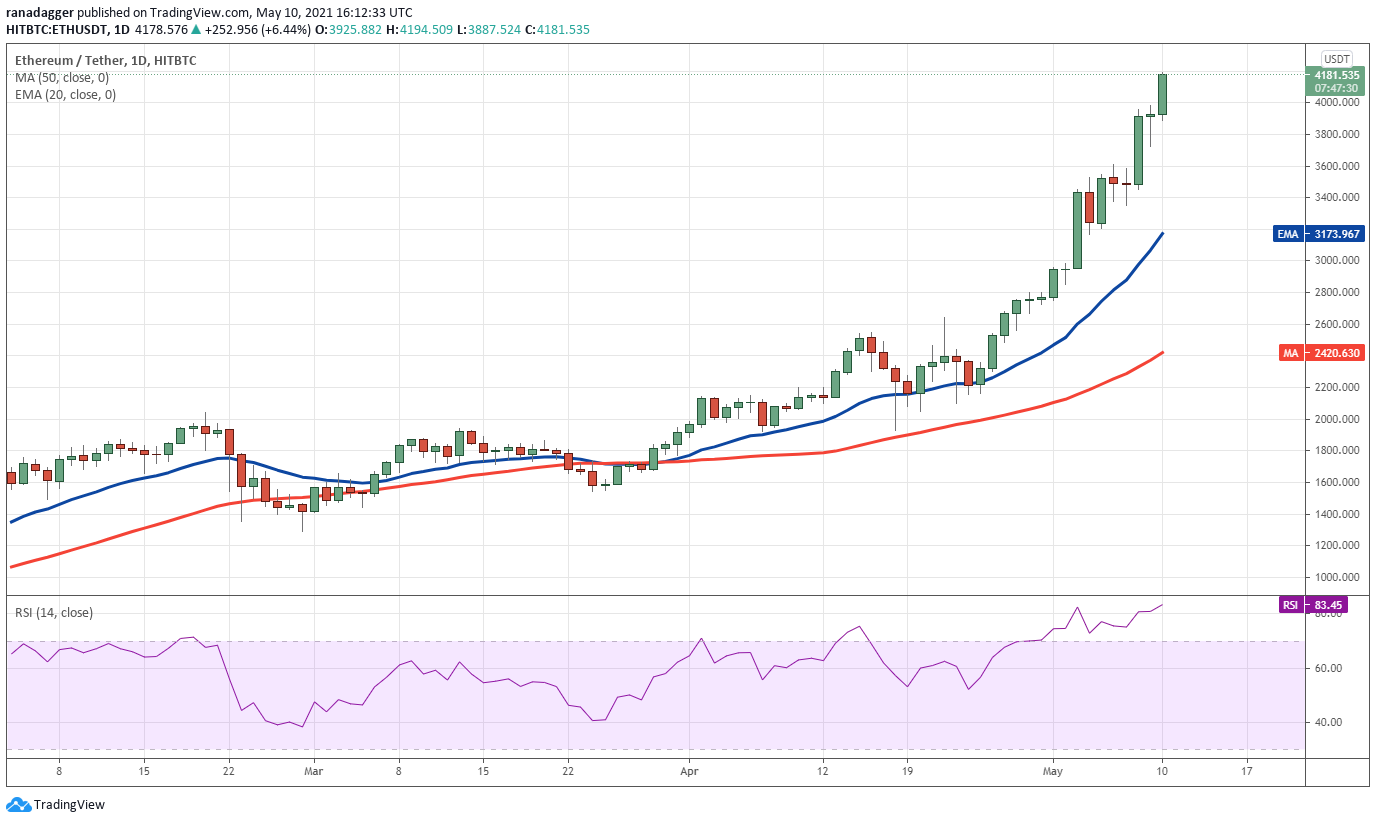 A deeply overbought level on the RSI indicates a buying frenzy as traders fear missing out on the rally. Generally, such rallies top out after the last bull has purchased. The ETH/USDT pair could rise to $4,528.97 and then to the psychological level at $5,000.

The first sign of the bullish momentum fading could be a correction that lasts for more than three days. A break below the 20-day EMA ($3,173) will signal the start of a deeper correction.

Binance Coin (BNB) rose to a new all-time high at $691.77 today but the bulls are struggling to sustain the price above the breakout level at $680. The long wick on the day’s candlestick suggests a lack of demand at higher levels. 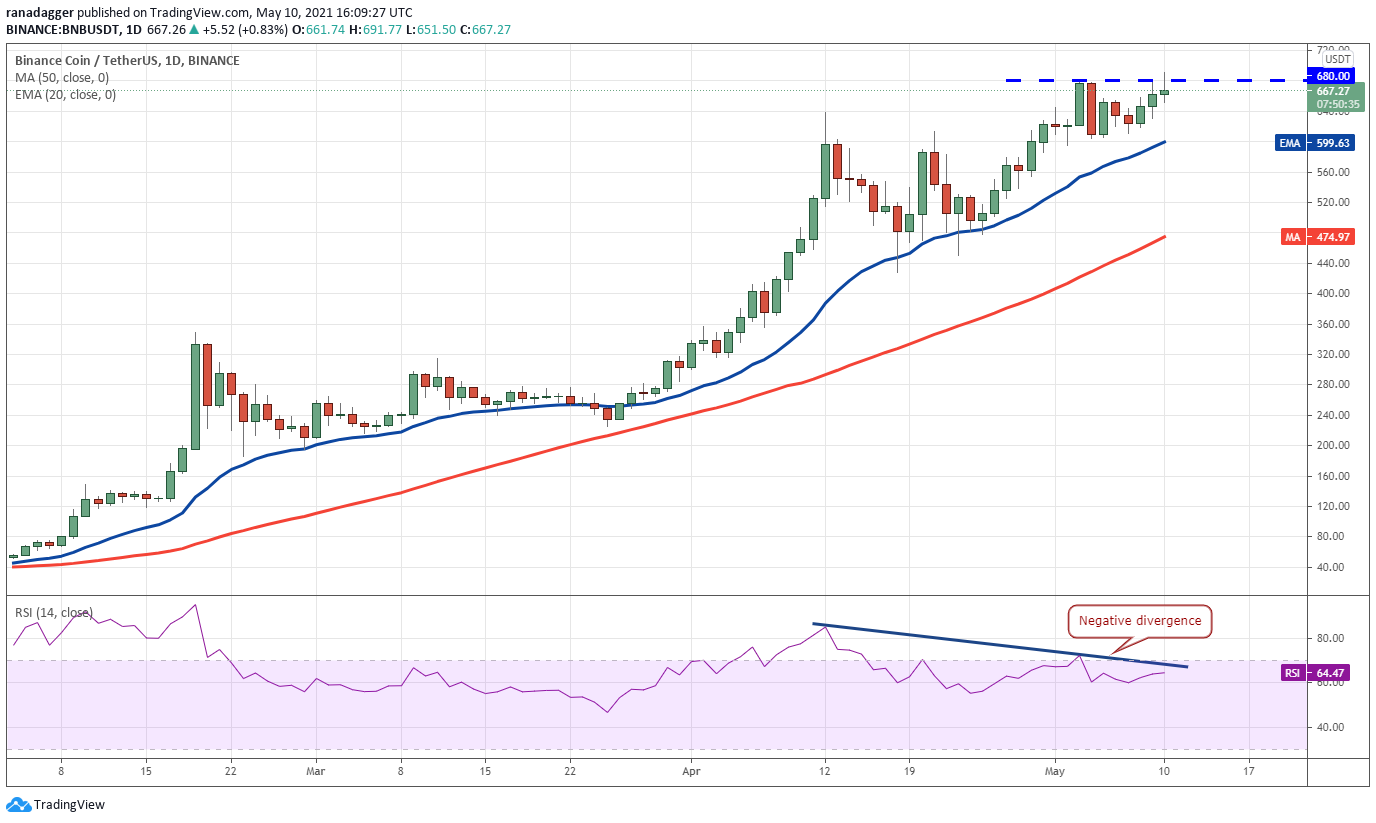 The upsloping moving averages indicate that buyers are in control, but the negative divergence on the RSI suggests the bullish momentum may be weakening. A break and close below the 20-day EMA ($599) could be the first sign of a deeper correction.

On the other hand, if the price rises from the current level or the 20-day EMA, the bulls will make one more attempt to push and sustain the BNB/USDT pair above $680. If they succeed, the pair could embark on a journey toward $760 and then $808.57.

Dogecoin (DOGE) witnessed a sharp dump on May 9 but the bulls aggressively defended the 20-day EMA ($0.44) as seen from the long tail on the day’s candlestick. However, the buyers could not extend the recovery today and the price has resumed its journey toward the 20-day EMA. 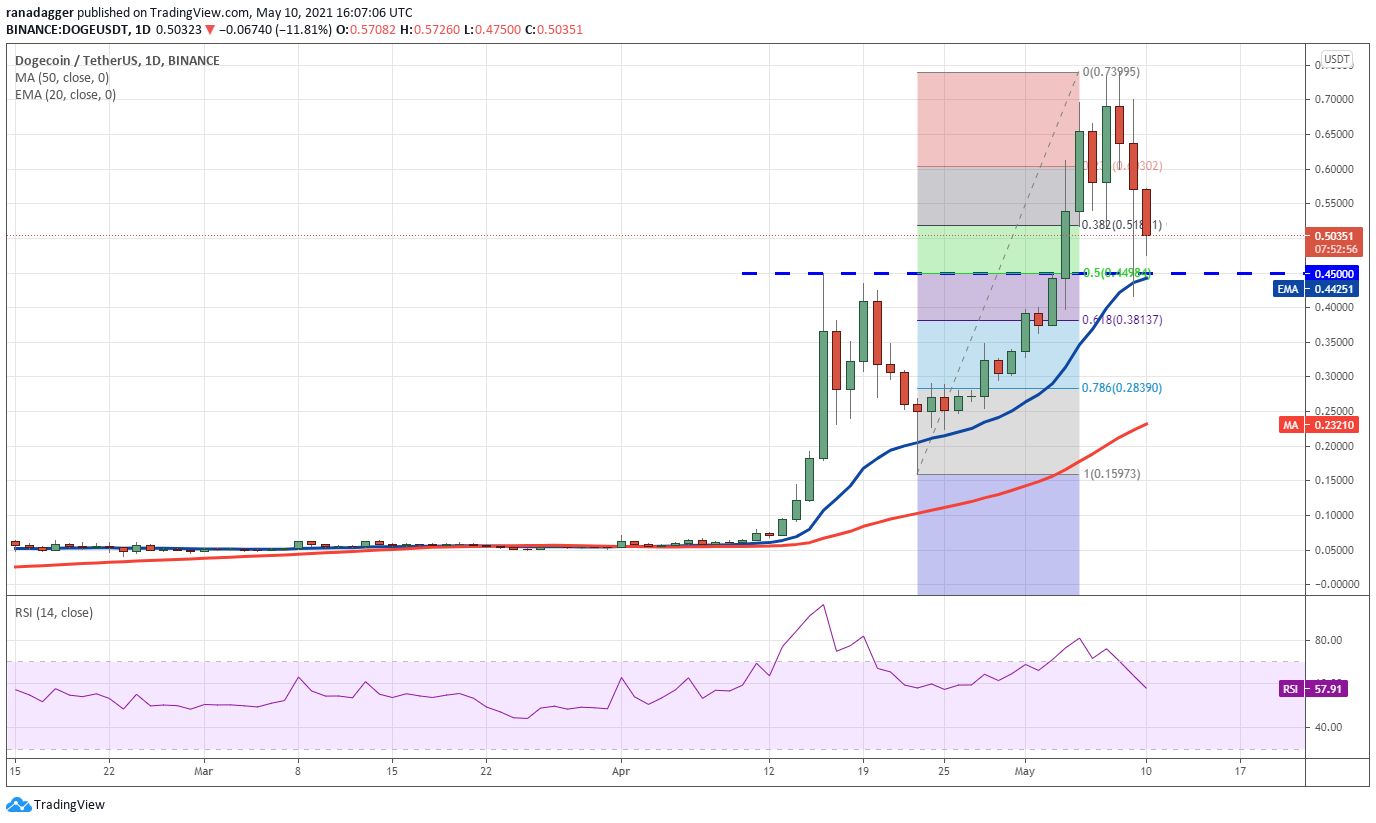 The 20-day EMA is gradually flattening out and the RSI has declined below 58, indicating the bullish momentum is weakening.

If the DOGE/USDT pair again rebounds off the 20-day EMA, it will suggest strong buying at lower levels. Such a move could keep the pair range-bound for a few more days.

This view will invalidate if the bears sink the price below the 20-day EMA. if that happens, the pair could drop to the 61.8% Fibonacci retracement level at $0.38.

XRP has repeatedly broken above the downtrend line since May 6 but the bulls have not been able to sustain the breakout. This suggests that traders may be using the rallies to lighten their long positions. 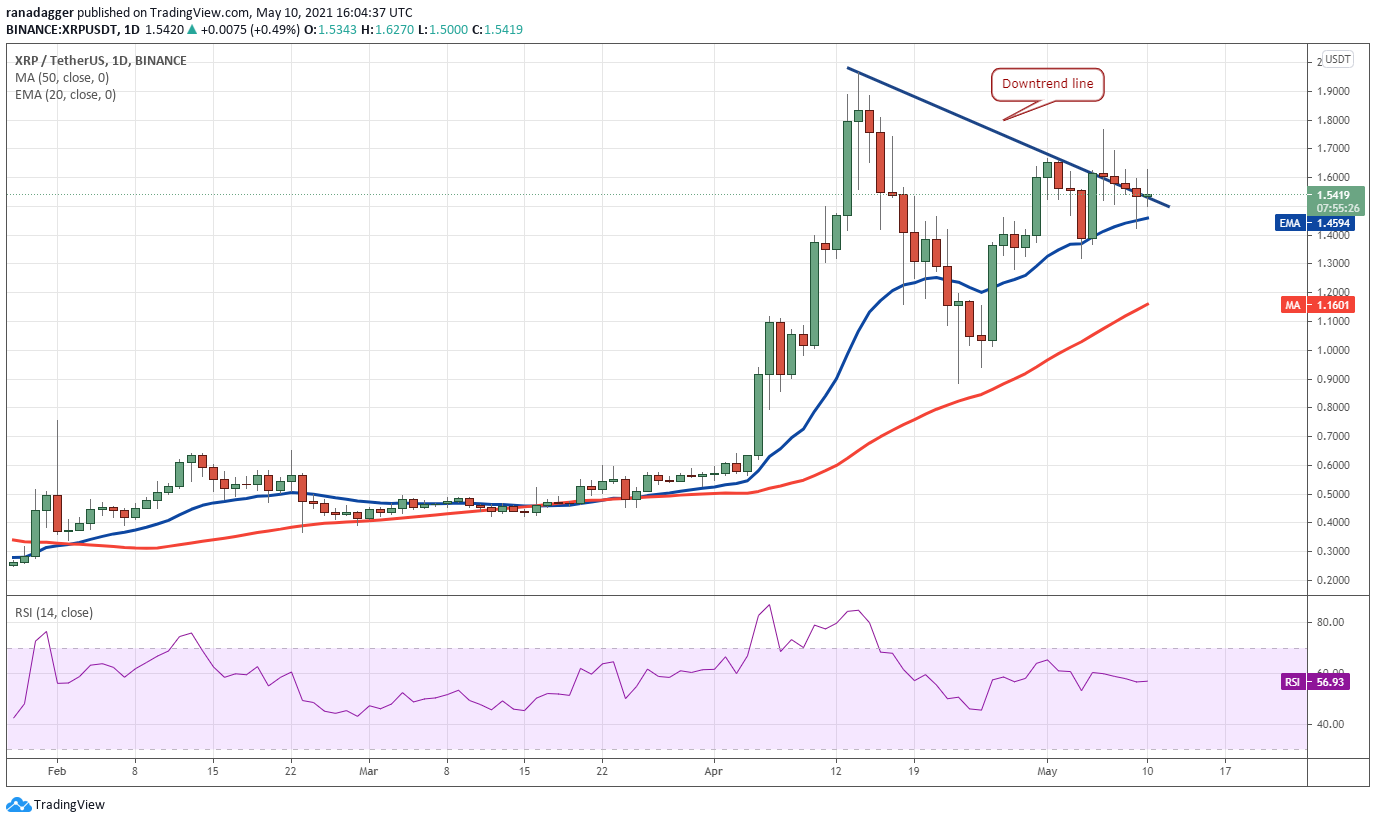 The buyers will have to push and sustain the price above $1.66 to enhance the prospects of a retest of the 52-week high at $1.96. The gradually upsloping 20-day EMA ($1.45) and the RSI above 56 indicate a minor advantage to the bulls.

This positive view will nullify if the price turns down and breaks below the 20-day EMA. Such a move will suggest that supply exceeds demand. The XRP/USDT pair could then drop to the 50-day simple moving average ($1.16). 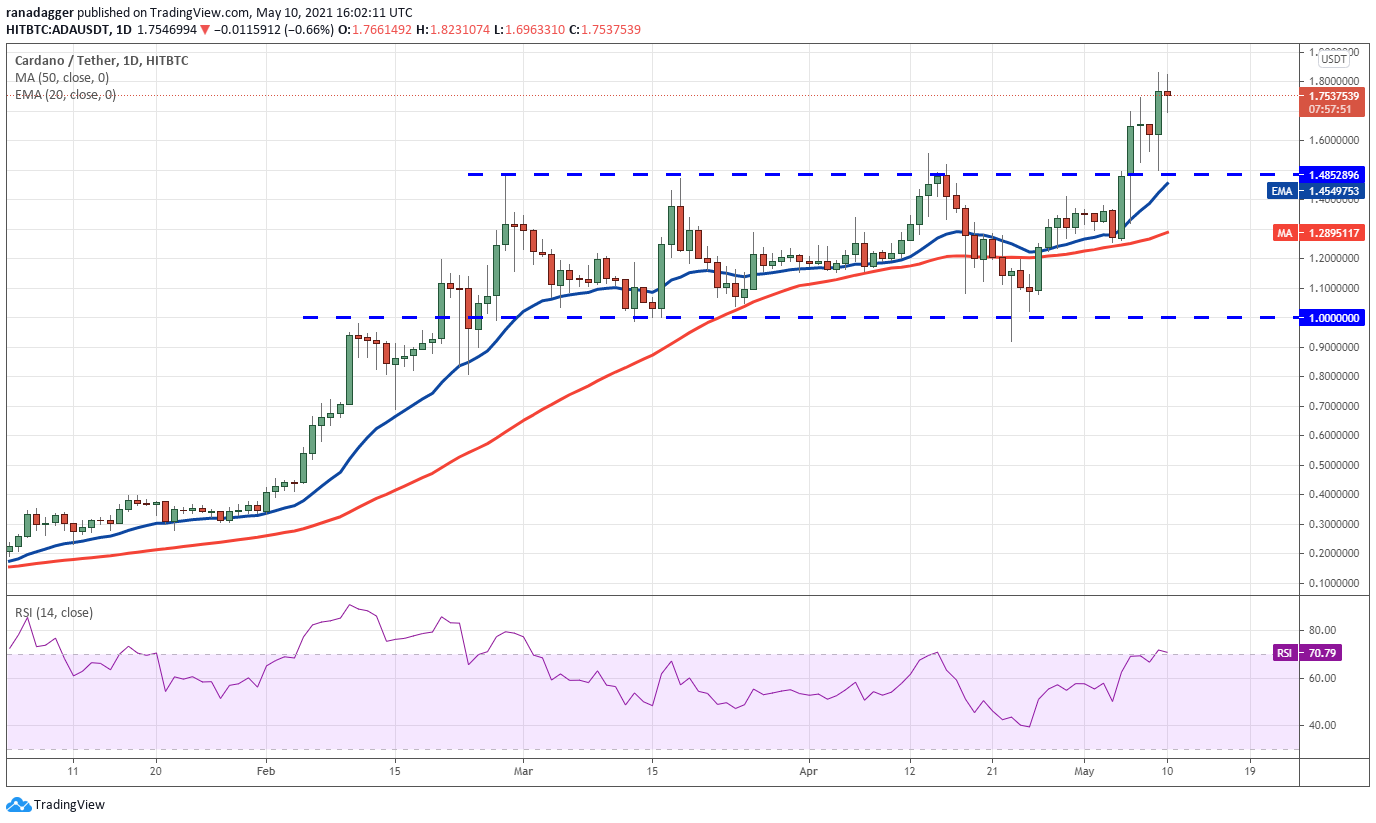 If the bulls do not give up much ground from the current level, it will signal strength and that could enhance the prospects of the resumption of the uptrend.

Contrary to this assumption, if the ADA/USDT pair turns down and breaks below the 20-day EMA ($1.45), it will indicate a bull trap. That could pull the price down to $1.28 and then to $1.

Polkadot (DOT) is stuck between the moving averages and the $42.28 overhead resistance. This tight range trading near the stiff resistance is a positive sign as it shows that traders are in no hurry to dump their long positions. 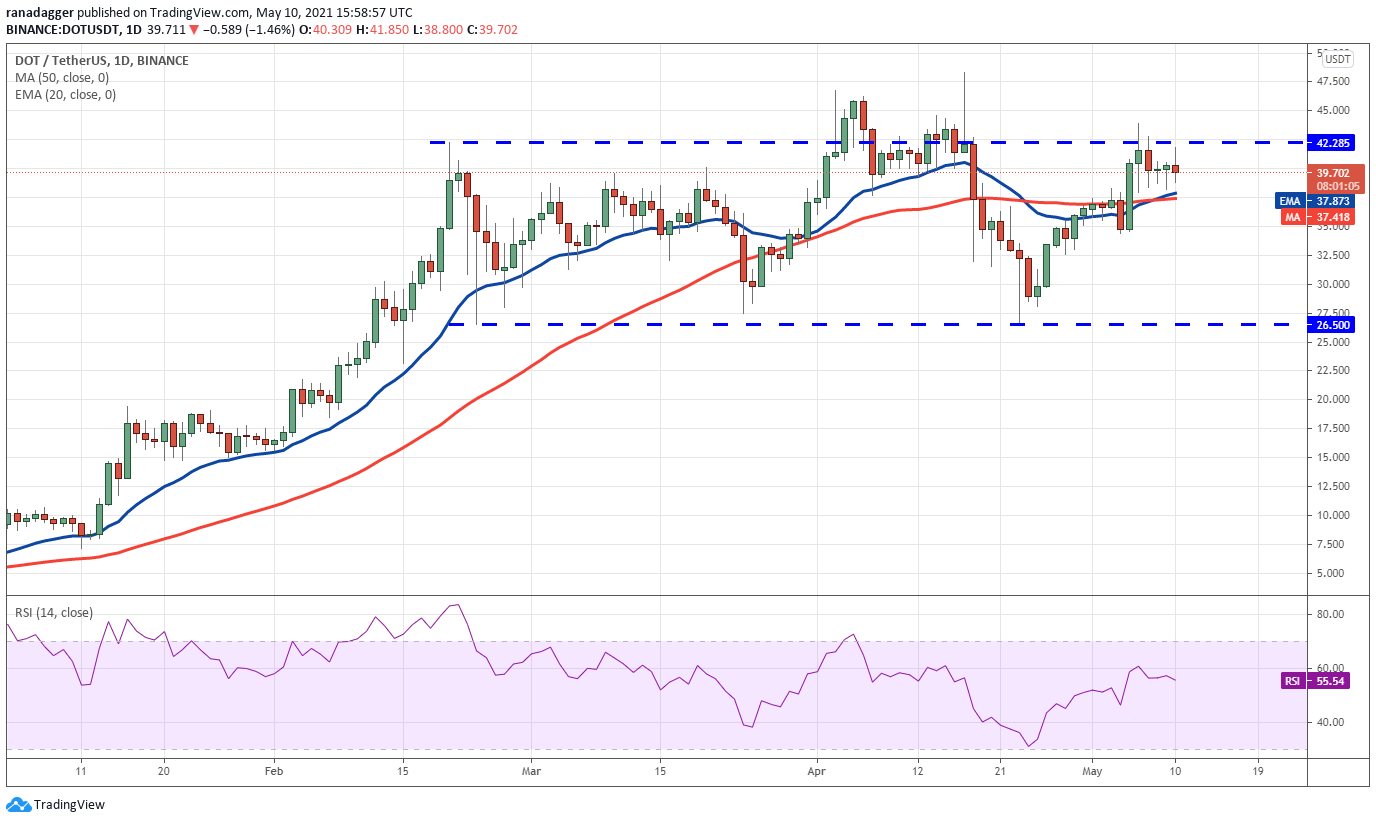 If the bulls can thrust and sustain the price above $42.28, it will suggest that demand exceeds supply. That could result in a rally to the all-time high at $48.36 where the bears are again likely to mount a stiff resistance. 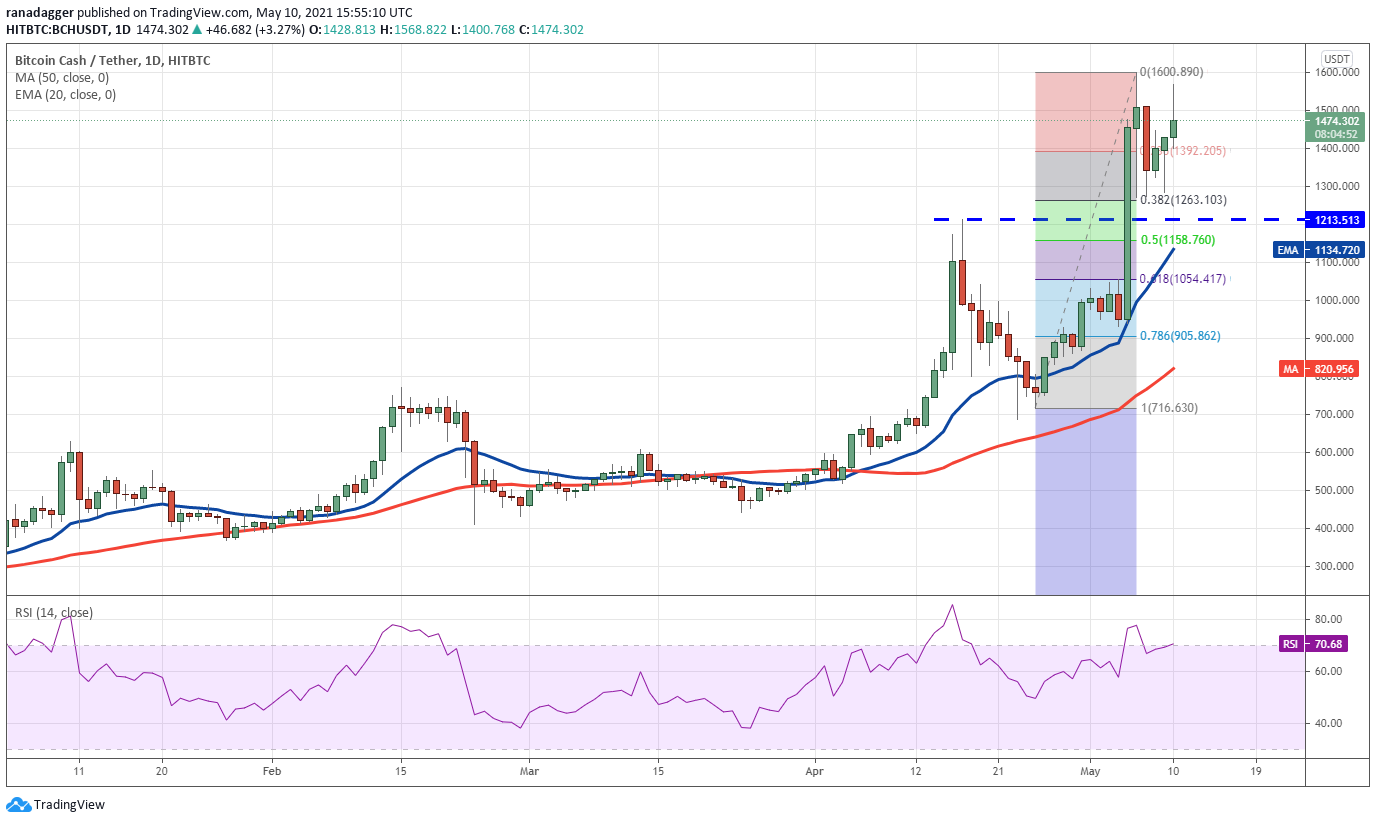 However, the upsloping moving averages and the RSI in the overbought zone suggest the path of least resistance is to the upside.

Litecoin surged above the resistance line of the ascending broadening wedge pattern on May 9, indicating a pick-up in momentum. The altcoin hit a new all-time high at $412.76 today but the long wick on the candlestick suggests profit-booking at higher levels. 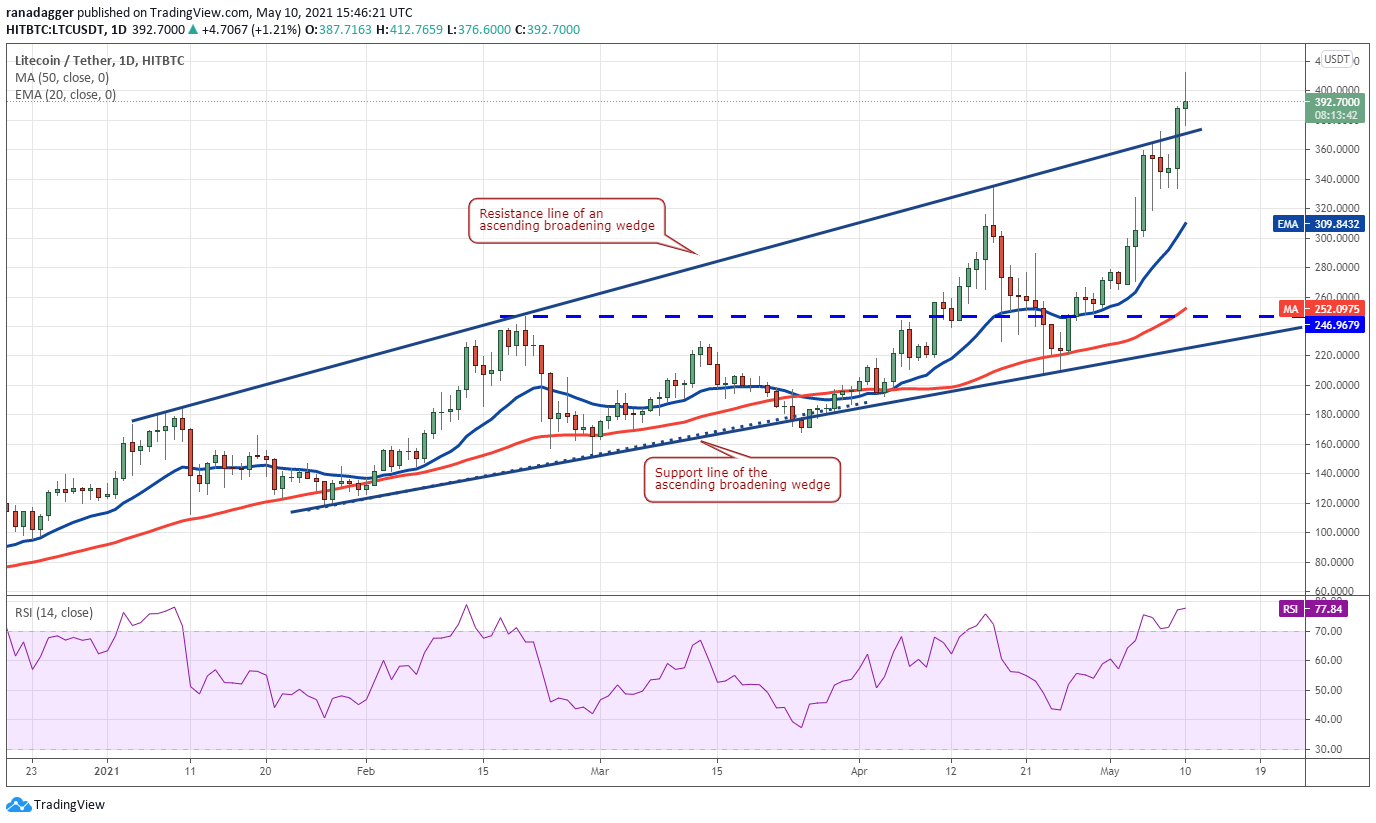 If the LTC/USDT pair rebounds off the breakout level, it will suggest that the bulls are buying every minor dip. That will increase the possibility of the resumption of the uptrend with the next target at $463.31 and then $500.

The bulls pushed Chainlink (LINK) above the resistance line of the ascending channel on May 5 but could not build up on the breakout. After hesitating for a few days, the bulls made a decisive up-move on May 9 and pushed the altcoin to $52.42. 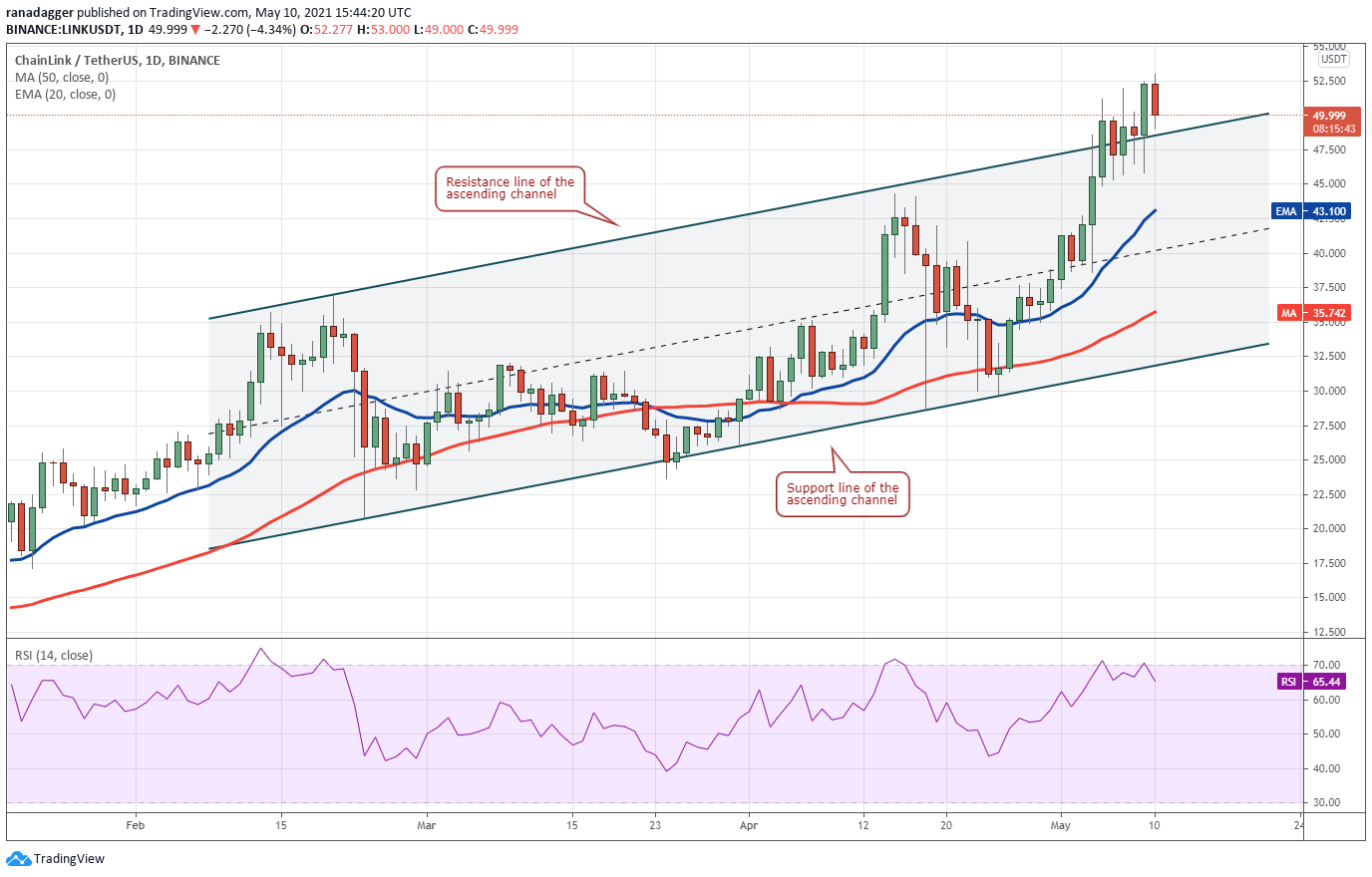 However, the bulls again failed to sustain the rally and the bears are trying to pull the price back into the ascending channel. If they succeed, the LINK/USDT pair may drop to the 20-day EMA ($43).

If the price rebounds off the 20-day EMA, the bulls may make one more attempt to resume the uptrend. On the contrary, a break below the 20-day EMA will suggest the current breakout was a bull trap. The pair could then drop to the support line of the channel.