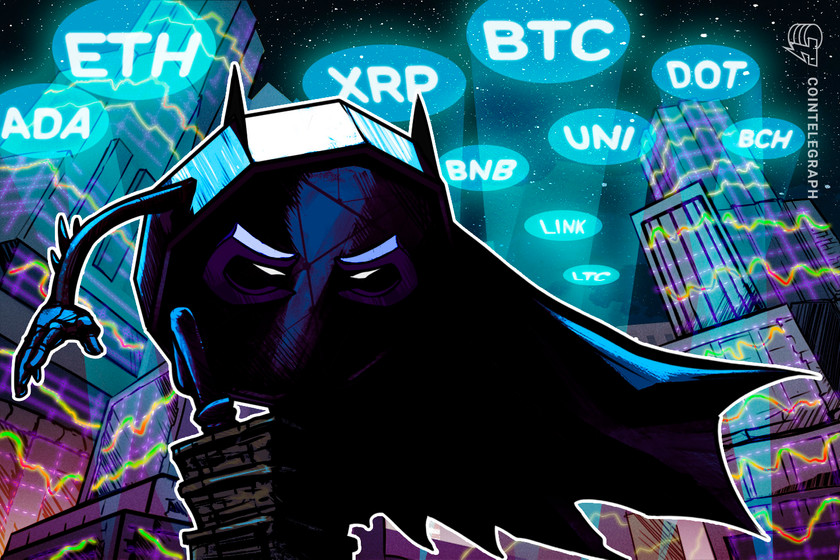 Select altcoins could move toward new highs if Bitcoin price continues to trade in a tightening range.

Institutional investors have continued to pump money into cryptocurrency investment products in Q1 of this year, according to a report by CoinShares. The inflows of $4.2 billion in the first quarter have broken the previous record of $3.9 billion made in the fourth quarter of 2020.

NYDIG CEO Robby Gutmann recently told listeners of the “On the Brink” podcast to brace for a slew of announcements by the firm’s strategic partners. Gutmann said the announcements could bring new levels of “Bitcoin adoption, Bitcoin availability, Bitcoin products and services within the existing traditional financial landscape.” 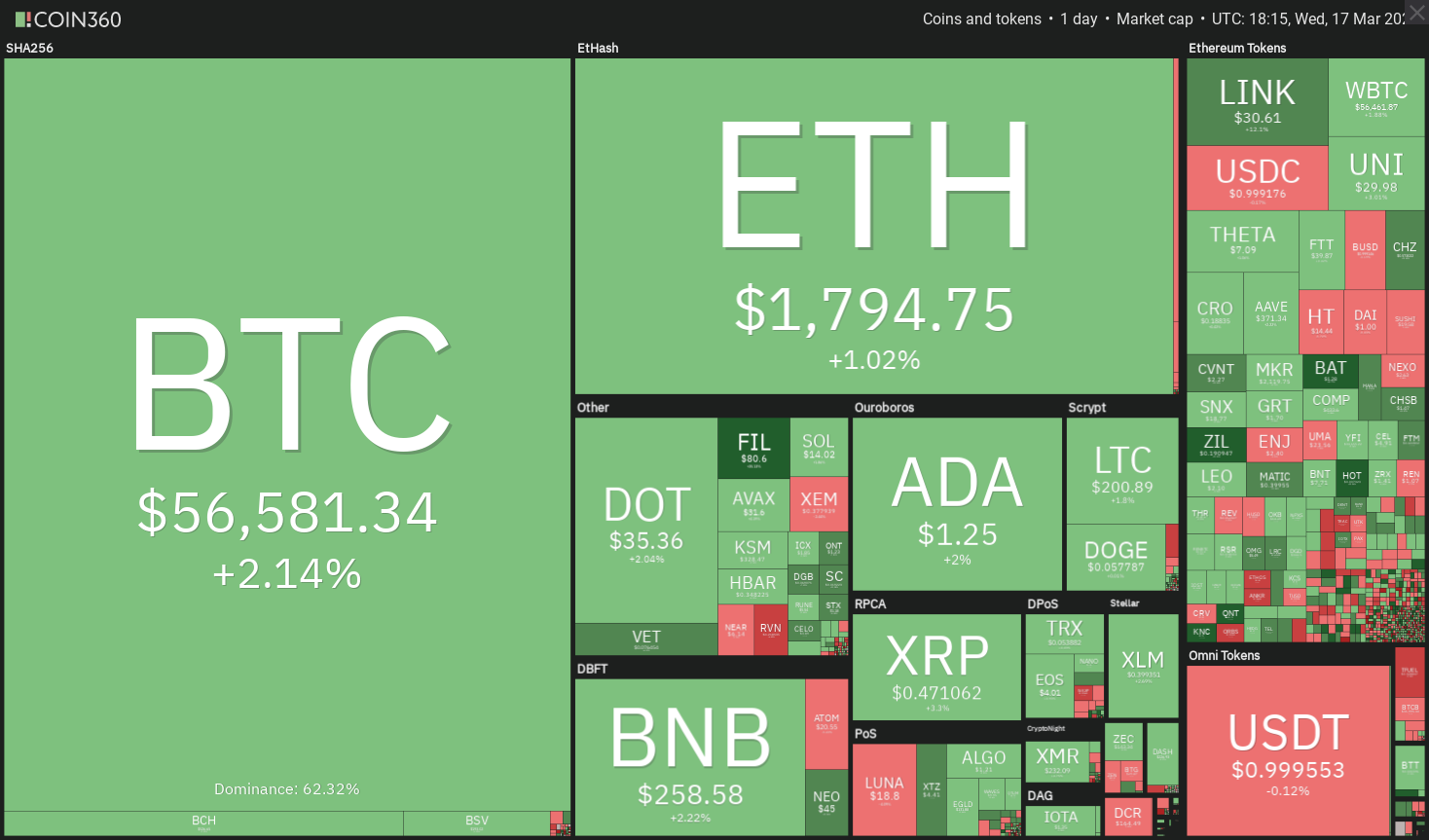 While new products and services that may attract fresh investors are a positive sign, traders should also keep an eye on the price of Bitcoin (BTC). In a bull market, every positive development is cheered by a sharp rise in price.

However, when the price stops reacting positively to favorable news, it is a sign of exhaustion. That does not guarantee a change in trend, but being watchful could safeguard traders from short-term pain.

Let’s study the charts of the top-10 cryptocurrencies to determine the next possible trending move.

Bitcoin rebounded off the 20-day exponential moving average ($53,739) on March 16 but the bulls are struggling to hold on to higher levels. This suggests profit-booking by traders on minor rallies. 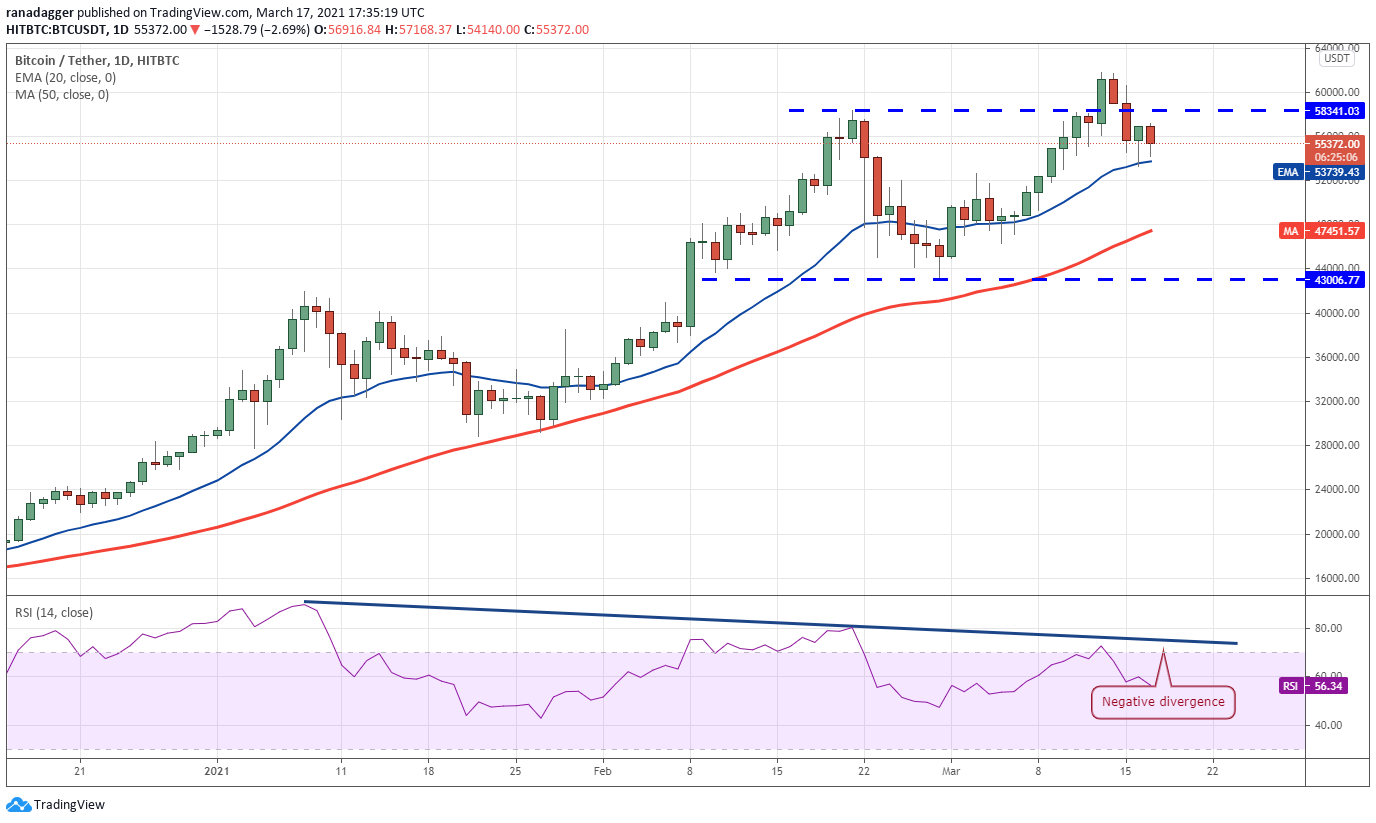 However, if the bulls again defend the 20-day EMA, it will indicate accumulation at lower levels. That could result in a move back to the all-time high at $61,825.84. A breakout of this resistance will signal the possible start of the next leg of the up-move that may reach $72,112.

Contrary to this assumption, if the bears can sink and sustain the price below the 20-day EMA, it will suggest that the bullish momentum has weakened. The BTC/USD pair could then drop to the 50-day simple moving average ($47,451) where the bulls are likely to step in.

The strength of the rebound off the 50-day SMA could provide further insights about the next possible move. A weak bounce will increase the possibility of a drop to the next support at $43,006.77. On the other hand, a strong rebound will suggest the uptrend remains intact.

The bulls are struggling to hold Ether (ETH) above the 20-day EMA ($1,743). Although the long tail on the March 16 candlestick suggests demand at lower levels, the failure to build upon that recovery today indicates hesitation by the bulls at higher levels. 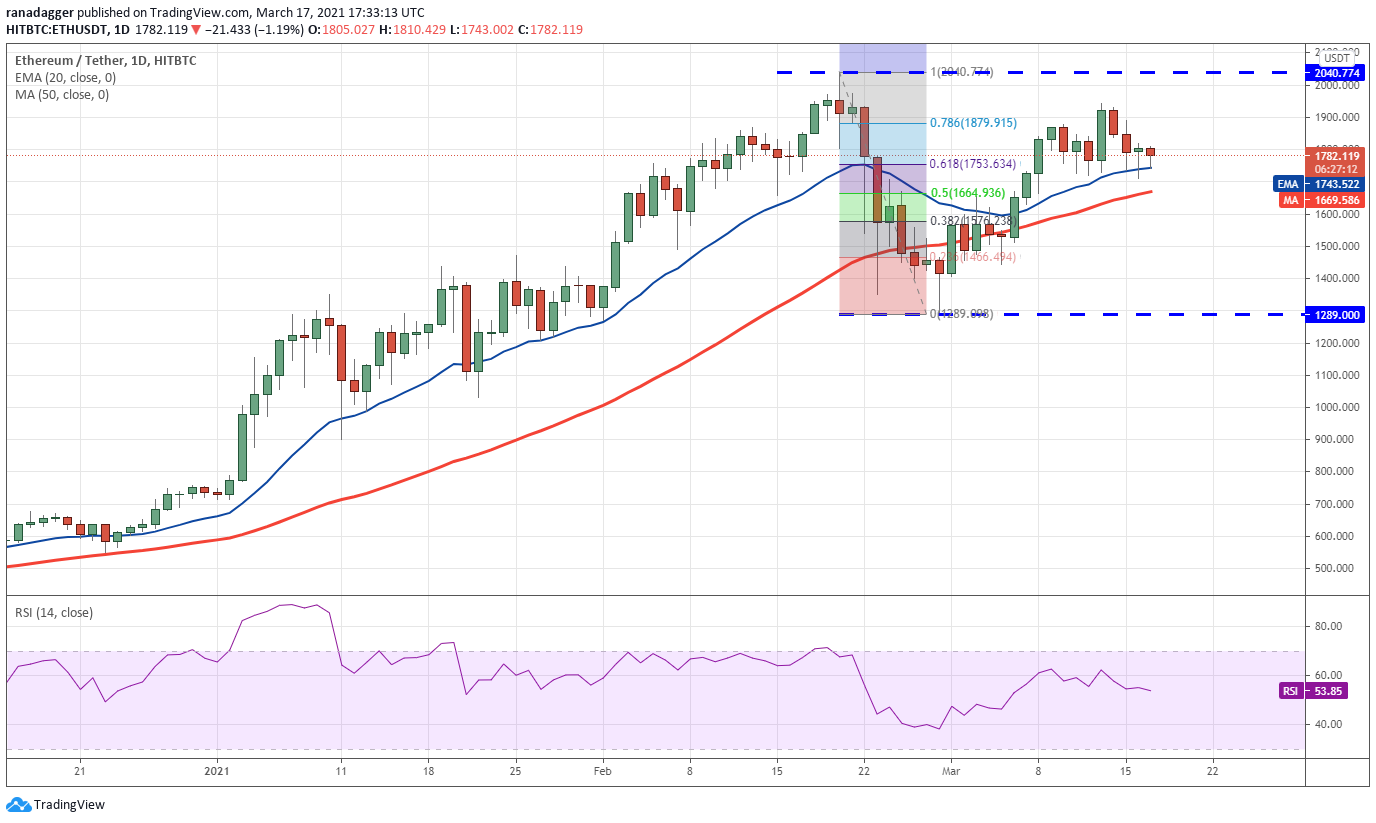 The repeated retest of a support level, within a short duration, tends to weaken it. If the bears sink the price below the moving averages, the ETH/USD pair could gradually start its descent to $1,455 and then to the critical support at $1,289.

Both moving averages are flattening out and the RSI is near the midpoint, suggesting a possible consolidation for the next few days. This neutral view will invalidate if the price bounces off the current level and breaks above the all-time high at $2,040.77.

If that happens, it will enhance the prospects of the resumption of the uptrend with the next target objective at $2,614.

Binance Coin (BNB) has been trading near the 20-day EMA ($247) for the past two days. However, the failure to rebound off it with strength indicates a lack of urgency among the bulls to buy at the current levels. 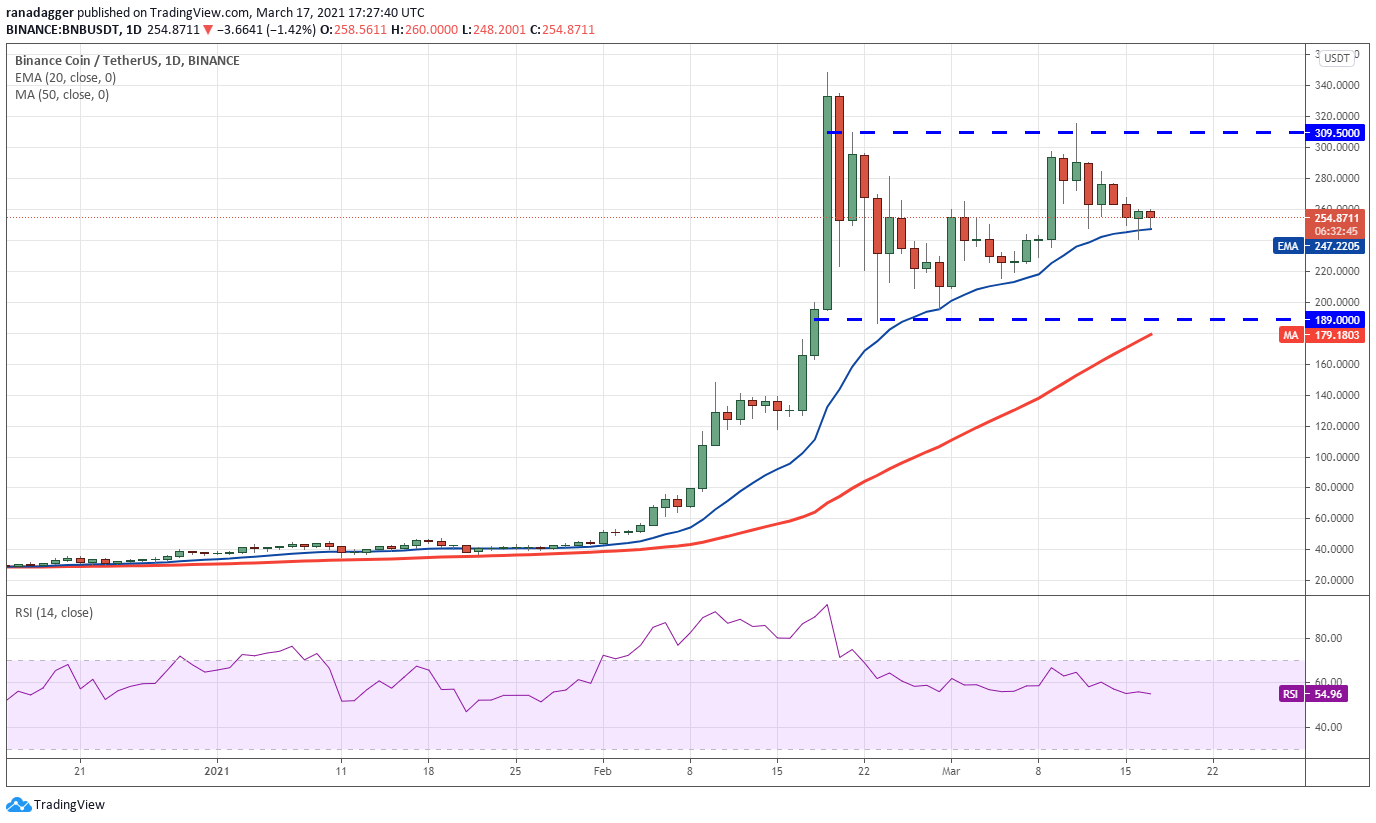 The 20-day EMA has flattened out and the RSI is just above the midpoint, suggesting a possible range-bound action for a few days. If that happens, the BNB/USD pair could remain stuck inside $189 and $309.50 for a few more days.

Cardano (ADA) soared and closed above the $1.23 overhead resistance on March 16. However, the bulls are struggling to sustain the bullish momentum today, which suggests that demand dries up at higher levels. 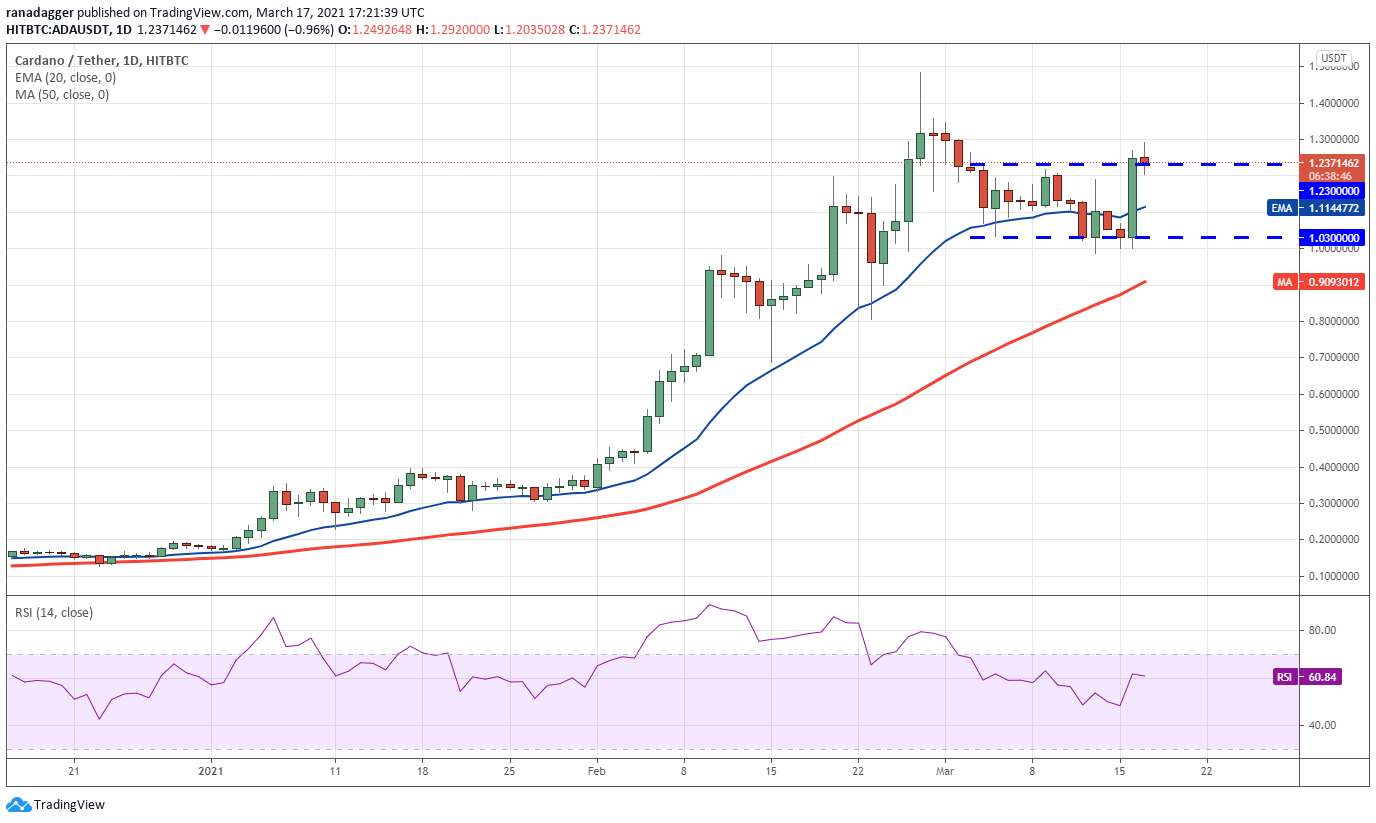 If the price dips and sustains below $1.23, it will suggest that the range-bound action may continue for a few more days.

However, the 20-day EMA ($1.11) has started to turn up and the RSI is trying to rise above 60, suggesting that the bulls are attempting to gain the upper hand.

If the bulls can defend the breakout level at $1.23, the ADA/USD pair could rise to $1.48. A breakout and close above this resistance could indicate the resumption of the uptrend.

Polkadot (DOT) has formed a symmetrical triangle pattern. Usually, this setup acts as a continuation pattern, but in some cases, it is also known to signal a reversal of the existing trend. Therefore, it is better to wait for the price to break above or below the triangle to determine the next possible trend. 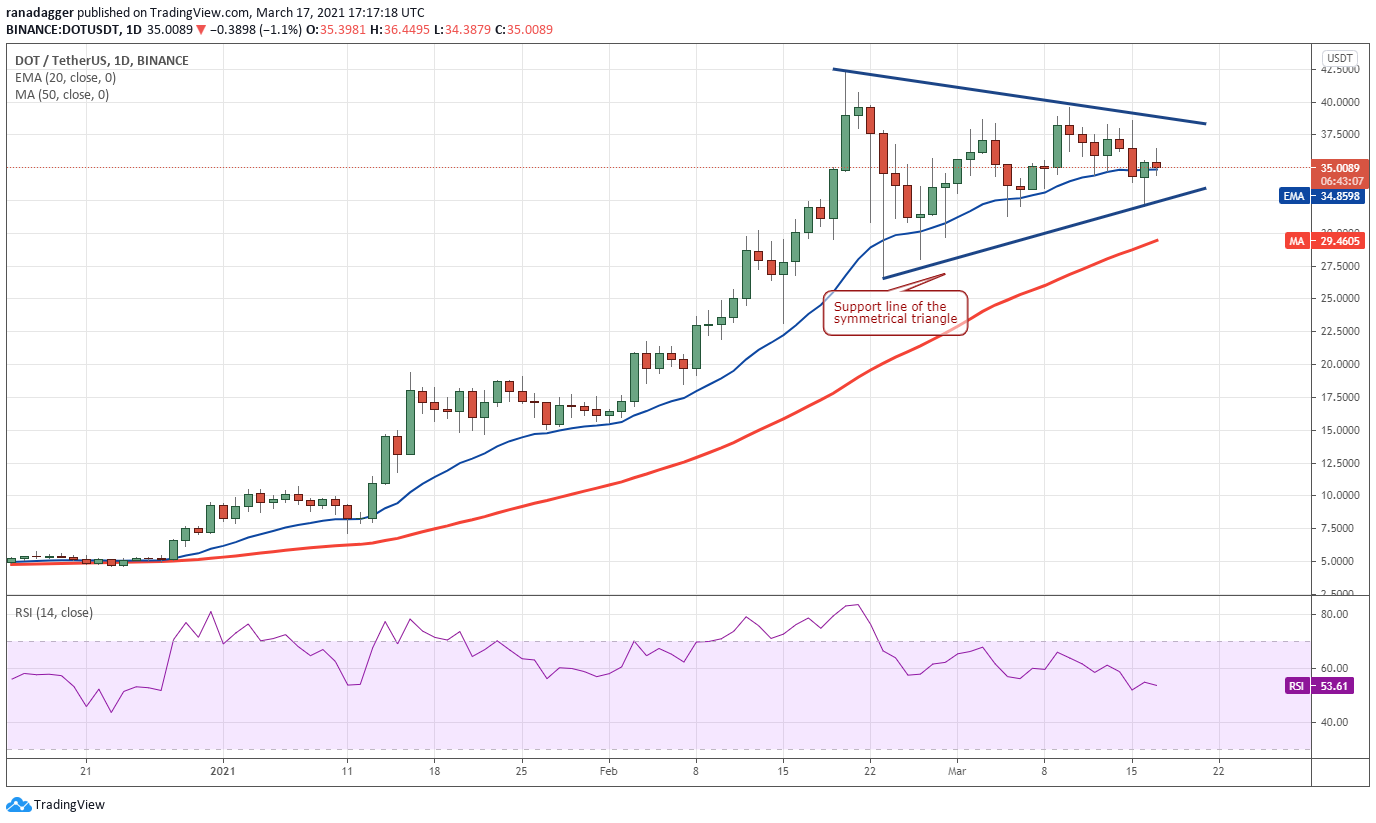 The flat 20-day EMA ($34.85) and the RSI near the midpoint are not hinting at a clear advantage either to the bulls or the bears.

If the bears can sink the price below the support line of the triangle, the DOT/USD pair could drop to the 50-day SMA ($29.46) and then to $26. The pattern target of the symmetrical triangle is much lower.

On the other hand, if the price turns up and breaks above the triangle, it will suggest that the bulls have overpowered the bears. That could start a rally to the pattern target at $55.

XRP jumped above the $0.50 overhead resistance on March 17, but the long wick on the candlestick suggests the bulls could not sustain the higher levels. This shows that traders are closing their positions on every minor rally. 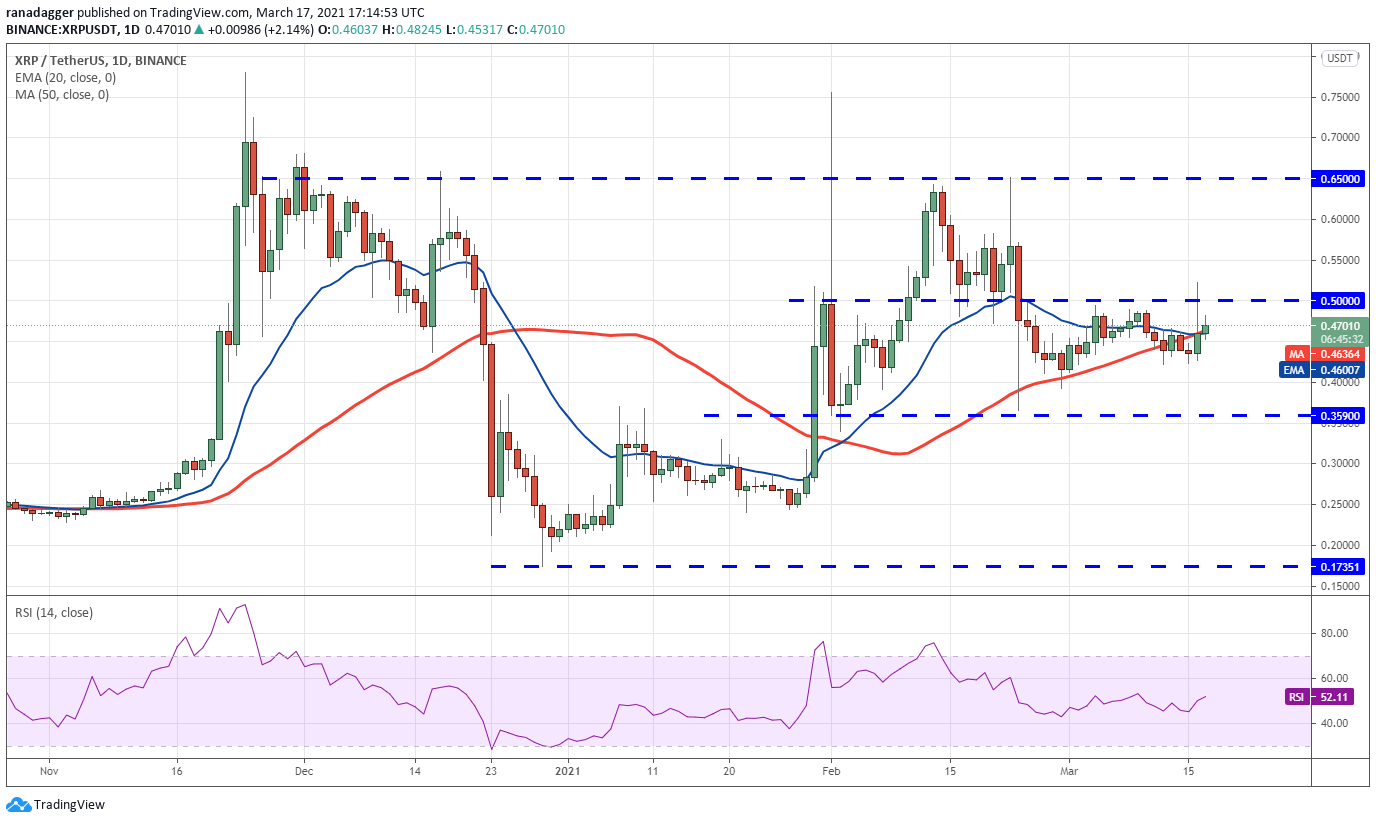 The flat moving averages and the RSI near the midpoint suggest the XRP/USD pair could remain range-bound between $0.35 and $0.50 for a few more days.

If the bulls want to gain the upper hand, they will have to push and sustain the price above $0.50 overhead resistance. If that happens, the pair could rally to $0.65.

Alternatively, if the bears sink the price below the $0.35 support, it could lead to panic selling. The next support on the downside is $0.25 and then $0.17. 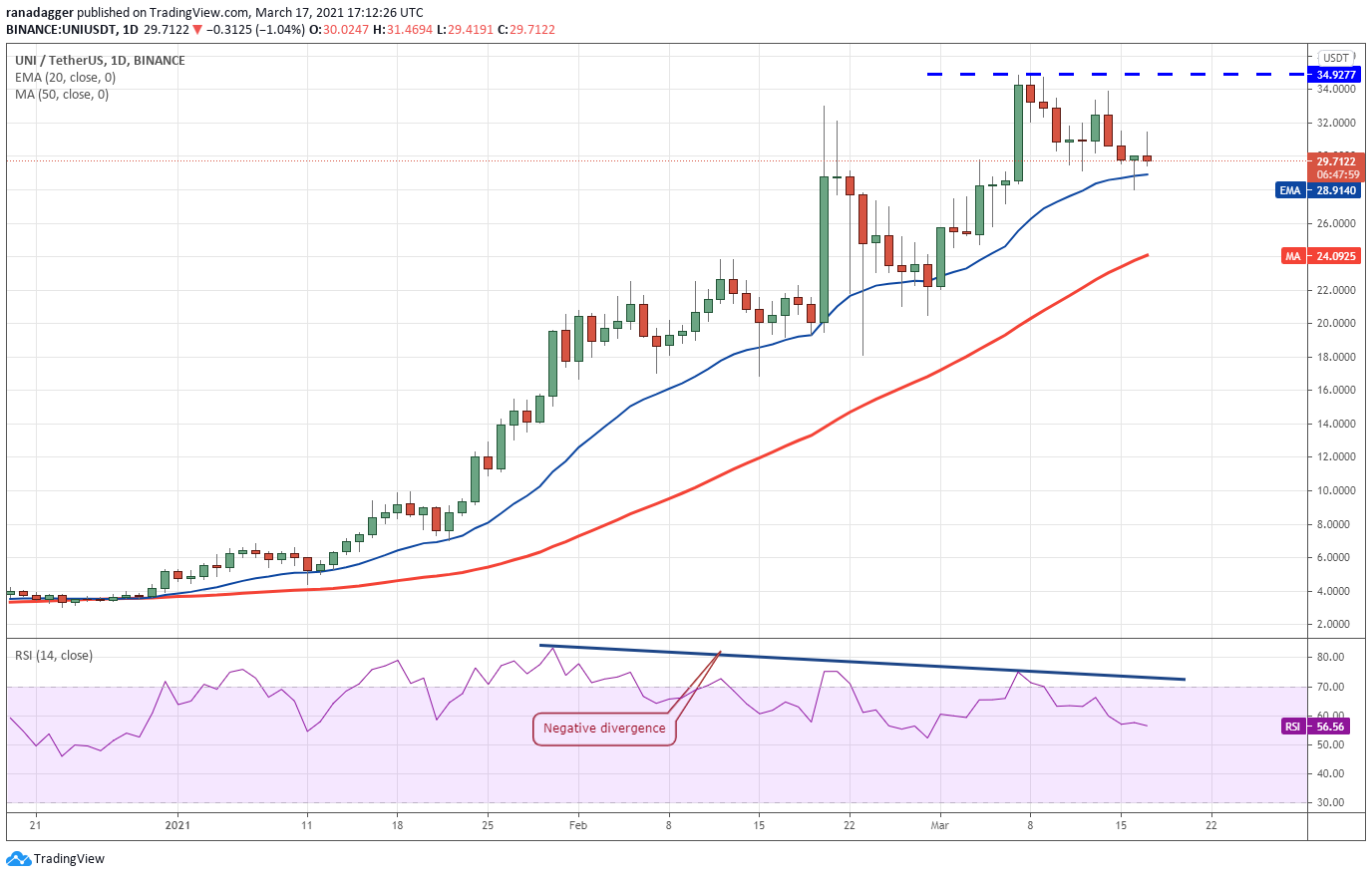 The negative divergence on the RSI shows the bullish momentum has weakened. Traders may aggressively book profits if the price sustains below the 20-day EMA. Such a move could pull the price down to the 50-day SMA ($24) and then to $20.

This bearish view will invalidate if the UNI/USD pair rebounds off the 20-day EMA and rises above the all-time high at $34.92. Such a move will indicate the possible resumption of the uptrend.

Litecoin (LTC) is trading inside a large symmetrical triangle. The bulls are currently attempting to defend the 20-day EMA ($198) while the bears are trying to sink the price below it. 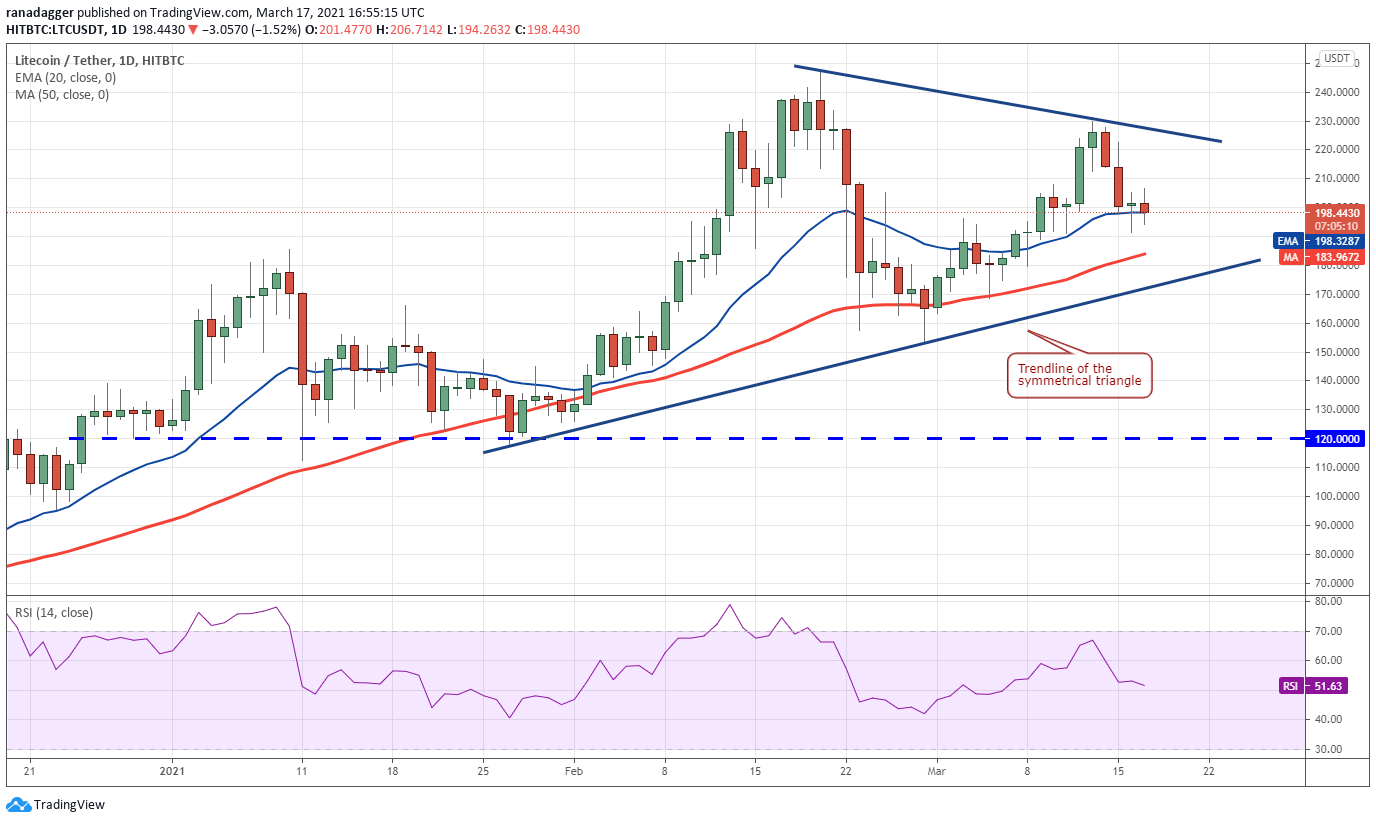 If the price slips below the 20-day EMA, a drop to the 50-day SMA ($183) and then to the trendline of the triangle is possible. A break below the triangle will signal advantage to the bears and open the doors for a possible fall to $153 and then $120.

Conversely, if the price rebounds off the current level, the bulls will make one more attempt to push the LTC/USD pair above the triangle. If they succeed, the pair could start its upward march.

The bulls purchased the dip below the 50-day SMA ($28) on March 16 and have followed it up with a strong up-move today. If buyers can propel Chainlink (LINK) above the $32 overhead resistance, a rally to $36.93 is possible. A break above this resistance may start the next leg of the uptrend. 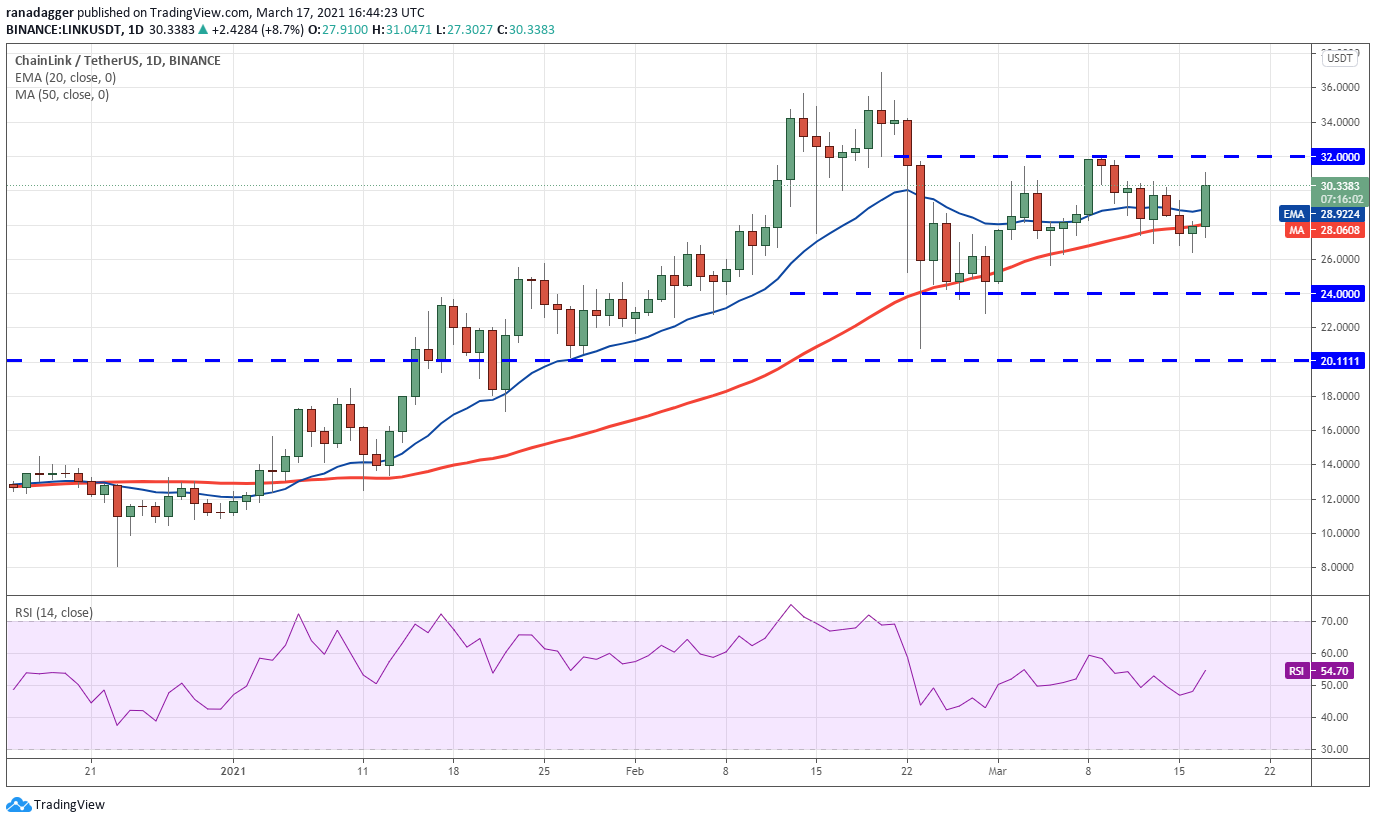 Contrary to this assumption, if the price once again turns down from $32, it will indicate that bears are aggressively defending this level. The LINK/USD pair could then drop to the moving averages and stay range-bound between $24 and $32 for a few days.

The flattish moving averages and the RSI just above the midpoint also suggest a few days of consolidation. The bears could gain an upper hand if they can sink and sustain the price below $24.

Bitcoin Cash (BCH) has broken below both the moving averages. The bulls tried to push the price back above the 20-day EMA ($538) on March 16 but failed. Today’s inside-day candlestick pattern indicates indecision among the bulls and the bears. 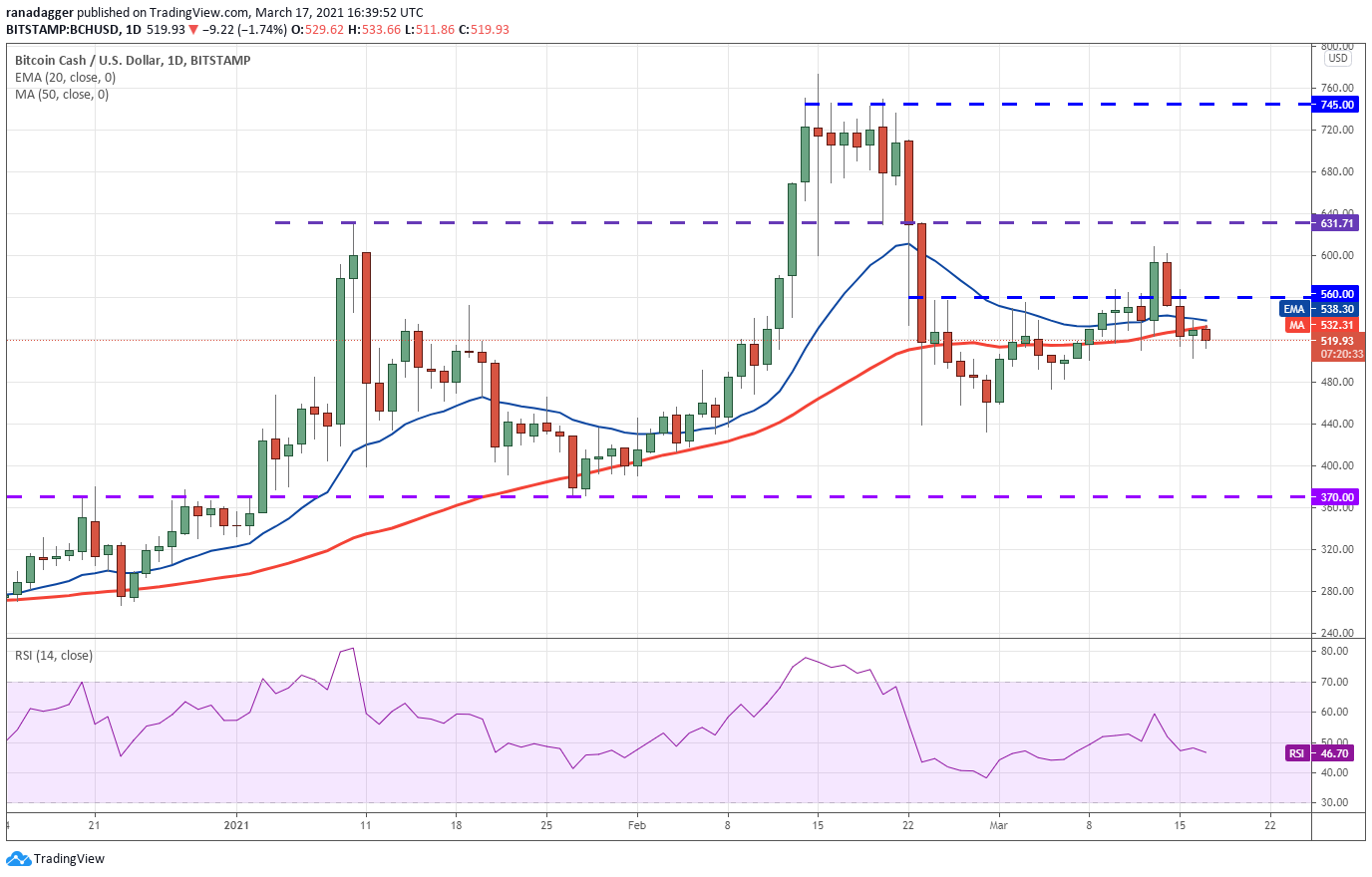 The 20-day EMA has started to turn down and the RSI is just below the midpoint, which shows the bears are attempting to gain the upper hand. If the bears can now sink the price below $502, the altcoin could start its journey to $440.

This bearish view will be invalidated if the price turns up from the current level and rises above $560. Such a move will suggest strong buying at lower levels. The BCH/USD pair could then move up to $631.71.