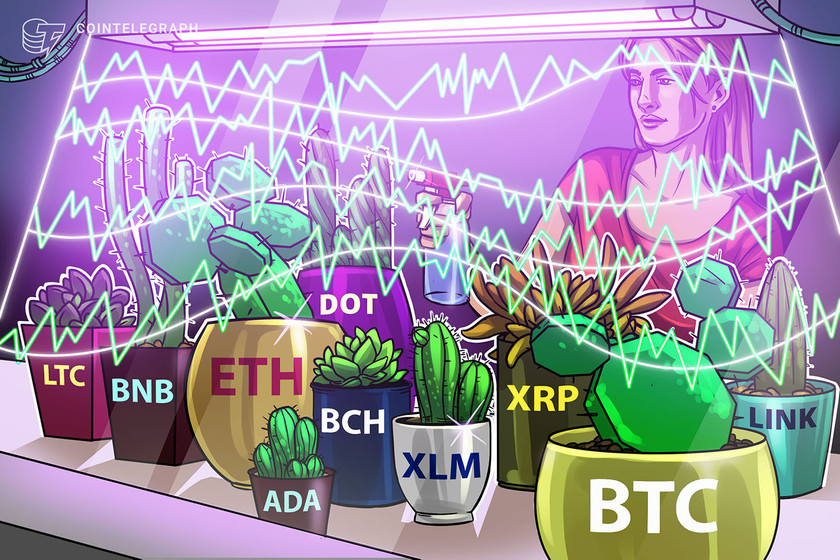 Bitcoin price is trading in a tight range, which is allowing multiple altcoins to push higher.

Tesla CEO Elon Musk recently voiced his support for Bitcoin (BTC) during a chat with Clubhouse. Musk said that his friends tried to onboard him to the Bitcoin bandwagon as early as 2013, but the world’s richest man did not take the final step. Musk admitted that he was “late to the party.”

Musk also said that Bitcoin could be “on the verge of getting broad acceptance by conventional finance." While these comments by the SpaceX founder are positive, they did not move the markets since he did not commit to buying Bitcoin as a personal investment or for the treasury reserves for his companies.

However, institutional investors have continued their purchases without waiting for a deeper correction. CoinCorner CEO Danny Scott noted that recently a single entity had withdrawn $500 million worth of Bitcoin, an indication of institutional buying.

While Bitcoin buyers seem to be planning to hold their positions, the same cannot be said about the pump and dump schemes that are being promoted in select altcoins. First, it was Dogecoin (DOGE) and today it is XRP’s 50% fall from $0.75 that may have left several novice traders with huge losses.

These violent corrections should be a lesson to traders and remind them to follow a well thought out trading strategy instead of getting carried away by emotions and greed.

Let’s study the charts of the top-10 cryptocurrencies to determine the trend and the path of least resistance.

Bitcoin has been hugging the downtrend line for the past three days, but the bulls have not been able to push and sustain the price above it. This shows that the bears are aggressively defending the higher levels. 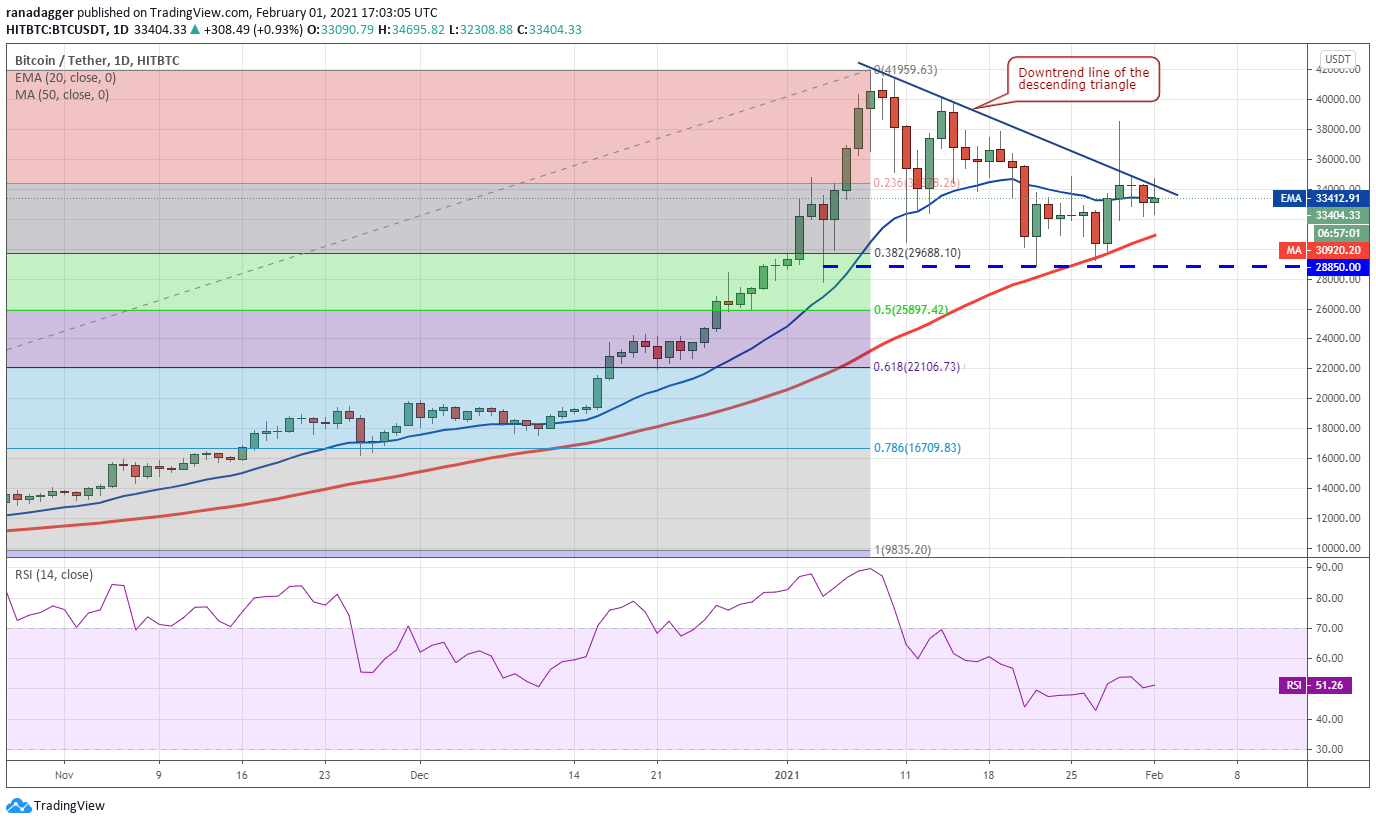 The 20-day exponential moving average ($33,412) has flattened out and the relative strength index (RSI) is near the midpoint, suggesting a balance between supply and demand.

If the bears sink the price below the $31,900 support, the BTC/USD pair could drop to the 50-day simple moving average ($30,920) and then to the critical support at $28,850. A break below this level will complete a bearish descending triangle pattern that could start a deeper correction.

The bears are defending the $1,400 overhead resistance while the bulls are buying the dips to the 20-day EMA ($1,258). This suggests that Ether (ETH) is stuck in a tightening trading range, which is likely to expand within the next few days. 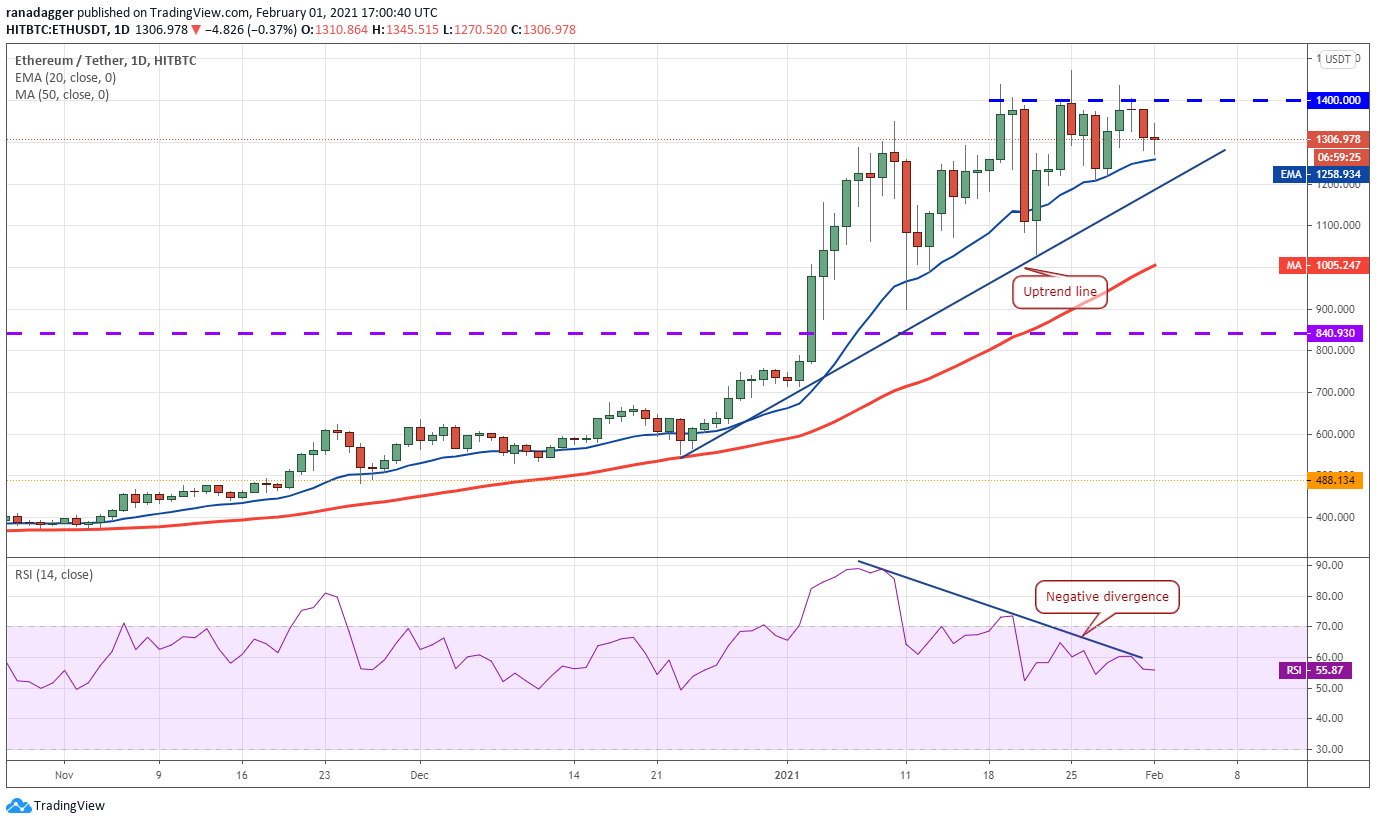 If the resolution happens to the downside and the bears sink the price below the uptrend line, the selling could intensify. This may result in a possible drop to the 50-day SMA ($1,005) and then to the critical support at $840.93.

On the contrary, if the ETH/USD pair turns up from the current level and breaks above the $1,400 to $1,473.096 resistance zone, it will indicate the resumption of the uptrend. The pair could then rally to $1,675.

While the upsloping moving averages suggest an advantage to the bulls, the negative divergence on the RSI favors the bears. As the indicators are sending mixed signals, it is better to wait for the price to complete a breakout before taking a directional bet.

XRP skyrocketed to an intraday high at $0.755 today, but the long wick on the day’s candlestick shows that traders used the higher levels to aggressively close their long positions. 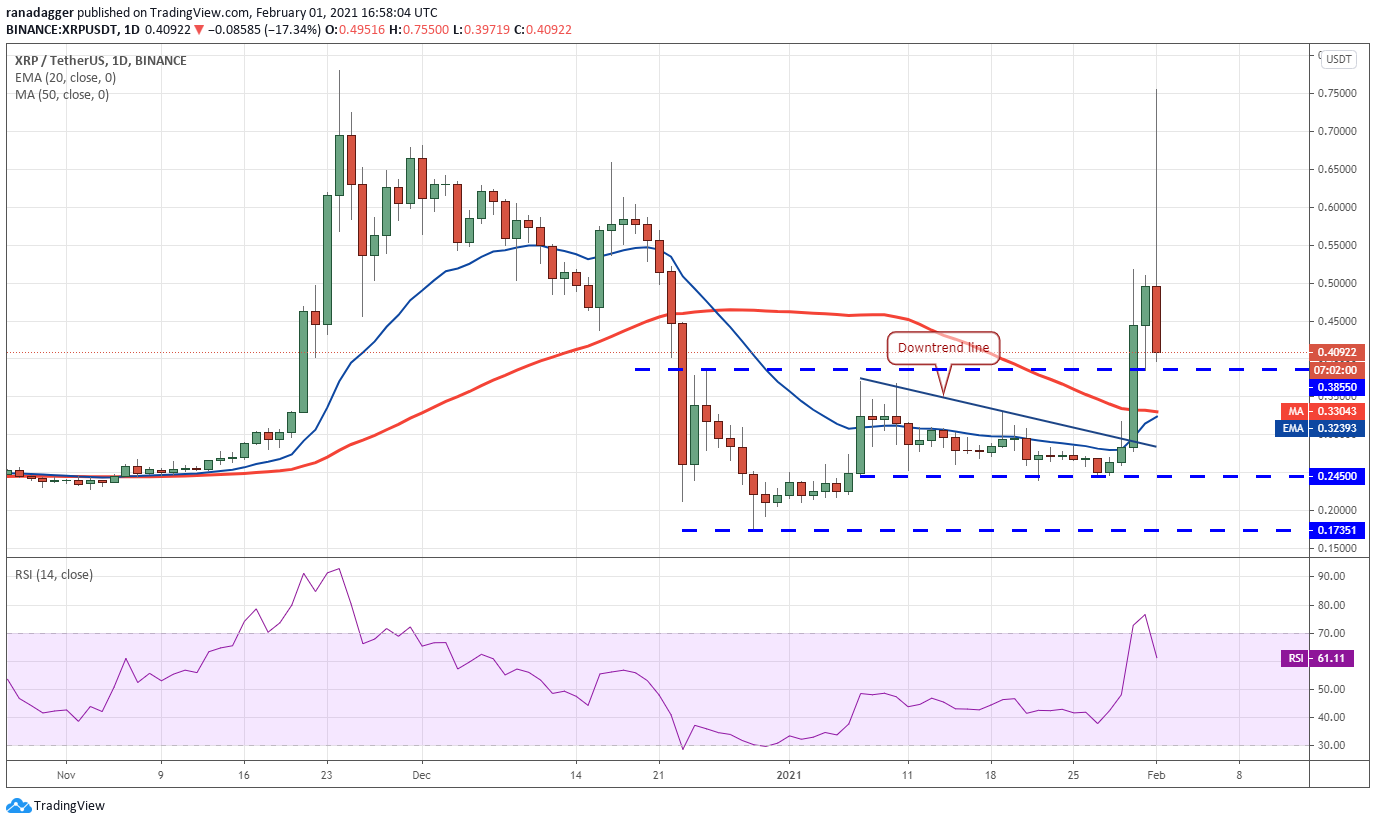 The XRP/USD pair has plunged to the $0.3885 support. If the bears sink the price below this level, the selling could intensify and the pair could drop to the moving averages and then to $0.245, giving back all of the recent gains. 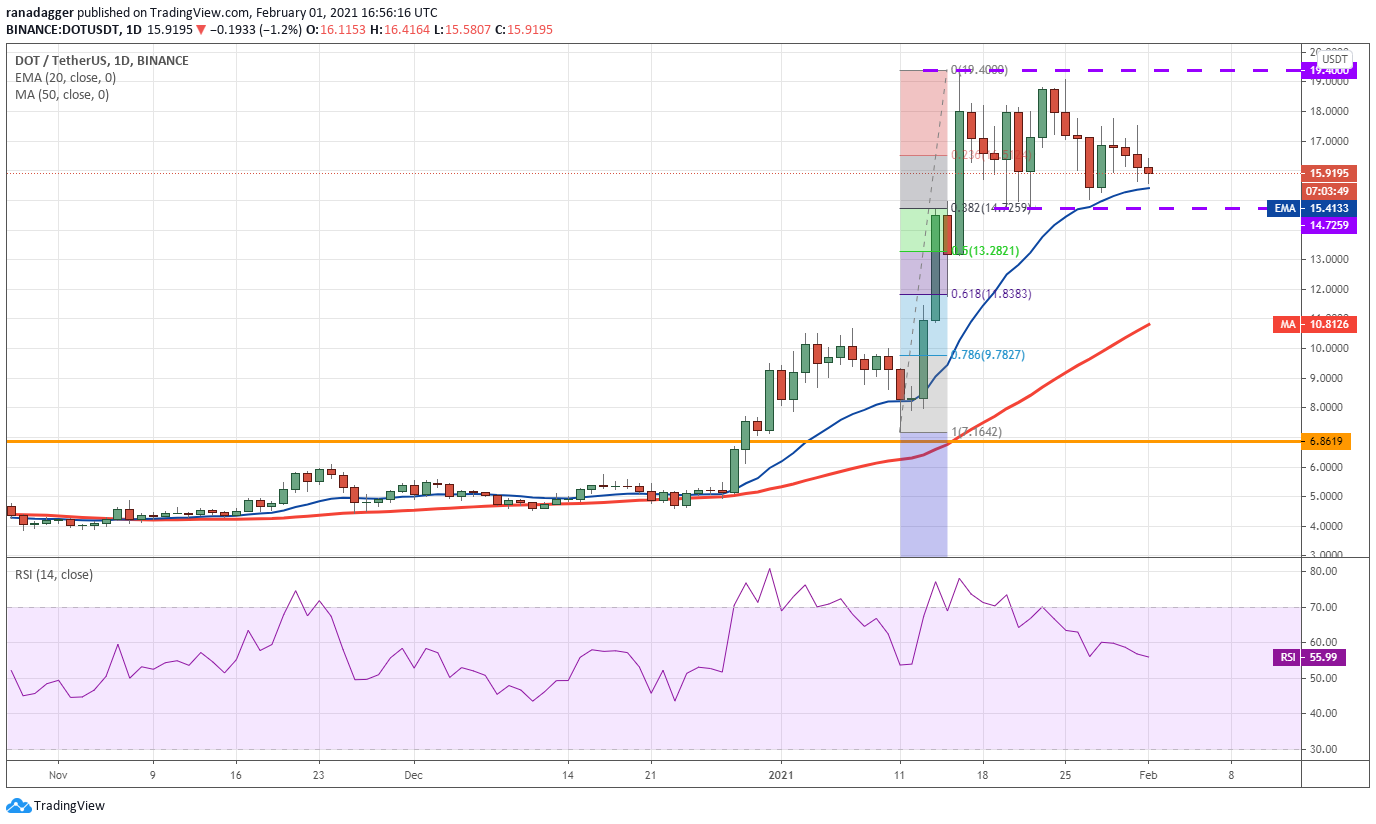 The 20-day EMA ($15.41) has started to flatten out and the RSI is gradually dropping towards the center, which points to a balance between supply and demand. If the price rebounds off the $14.7259 support, the consolidation may extend for a few more days.

Contrary to this assumption, a break below the $14.7259 support will be the first sign of weakness. That could pull the DOT/USD pair down to the 61.8% Fibonacci retracement level at $11.8383.

This negative view will invalidate if the bulls can push the price above the $19.40 range. Such a move will signal the resumption of the uptrend.

Cardano (ADA) broke above the downtrend line on Jan. 30, but the bulls could not push the price above the $0.38 resistance, which shows that demand dries up at higher levels. 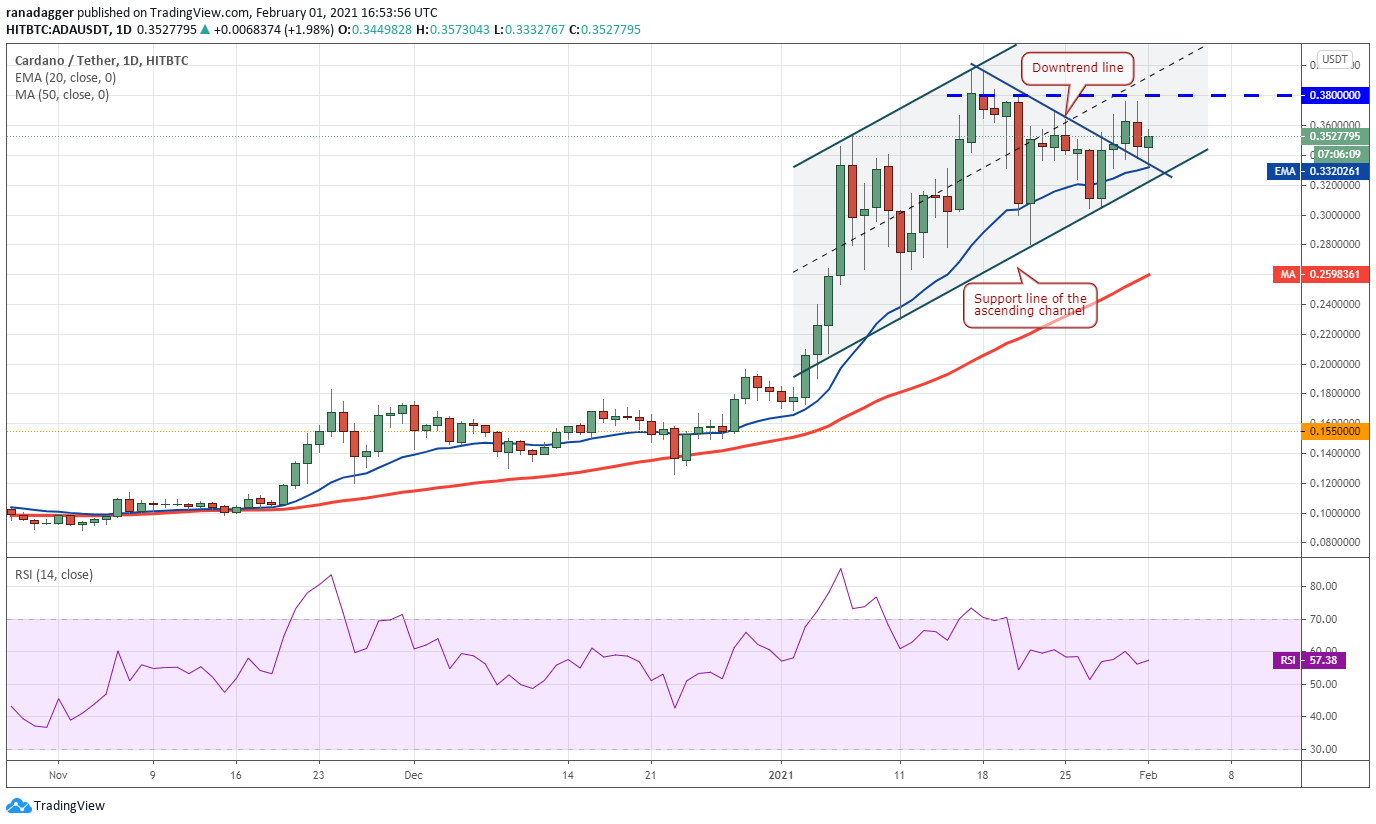 However, the positive sign is that the bulls have not allowed the price to dip below the support line of the ascending channel. The buyers are currently attempting to defend the 20-day EMA ($0.33).

A strong rebound off the current levels could reach the $0.38 overhead resistance. If the bulls can push the price above this level, the ADA/USD pair could resume the uptrend, with the next target objective at $0.48.

Chainlink (LINK) has not been able to sustain above the $24 level for the past few days, which suggests traders are closing their long positions on rallies. 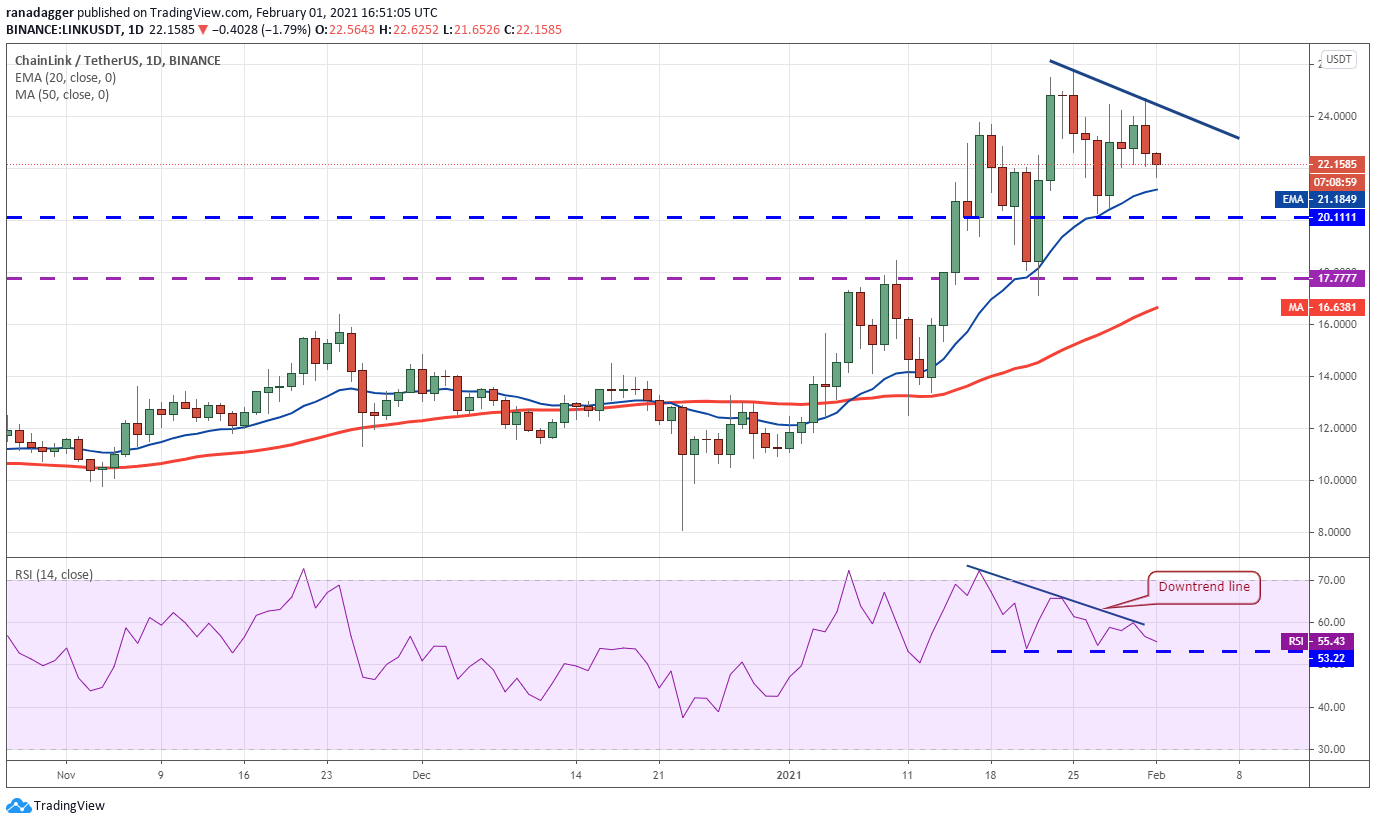 The RSI has formed a descending triangle pattern, which will complete on a break and close below 53. Sometimes, the patterns on the indicators project the upcoming directional move in the price.

This negative view will invalidate if the pair rebounds off the 20-day EMA or the $20.1111 support and sustains above the downtrend line. Such a move will enhance the prospects of the resumption of the uptrend.

Litecoin (LTC) has been facing stiff resistance at the downtrend line for the past few days. The long wick on the day’s candlestick suggests every relief rally is being sold into. 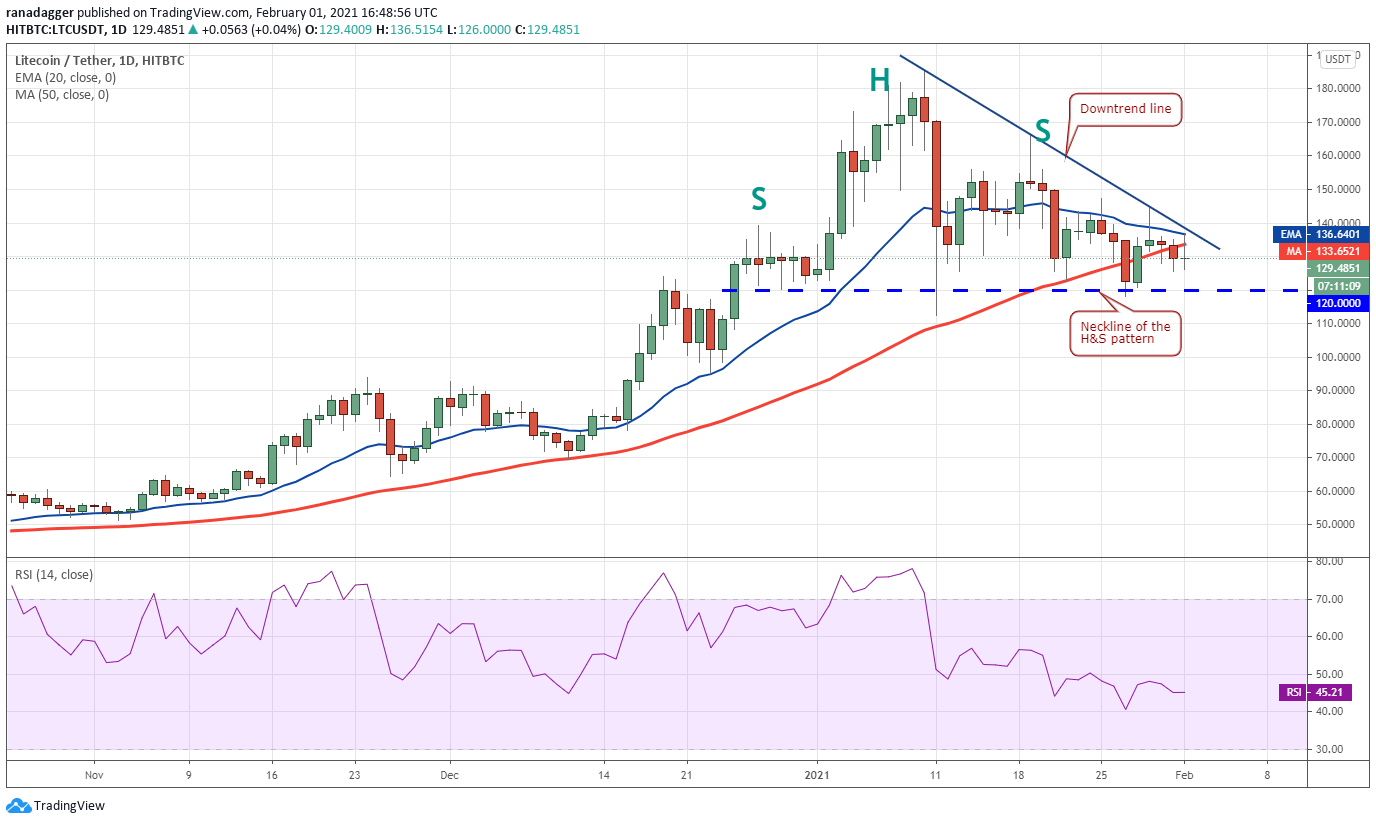 If the bulls fail to push the price above the downtrend line within the next few days, the possibility of a break below the $120 support increases. If that happens, the LTC/USD pair will complete a bearish head and shoulders pattern, which has a target objective of $55.

However, it may not be a straight fall because the bulls will try to stall the decline at $100 and then again at $70.

This negative view will be negated if the bulls can push and sustain the price above the downtrend line. Such a move will suggest that the selling pressure may have ended. On the upside, a break above $150 will suggest the bulls are making a comeback.

The relief rally in Bitcoin Cash (BCH) is facing stiff resistance at the 20-day EMA ($429), which suggests the bears are attempting to defend this level. If the price turns down and breaks below the $370 to $353 support zone, the altcoin could drop to $275. 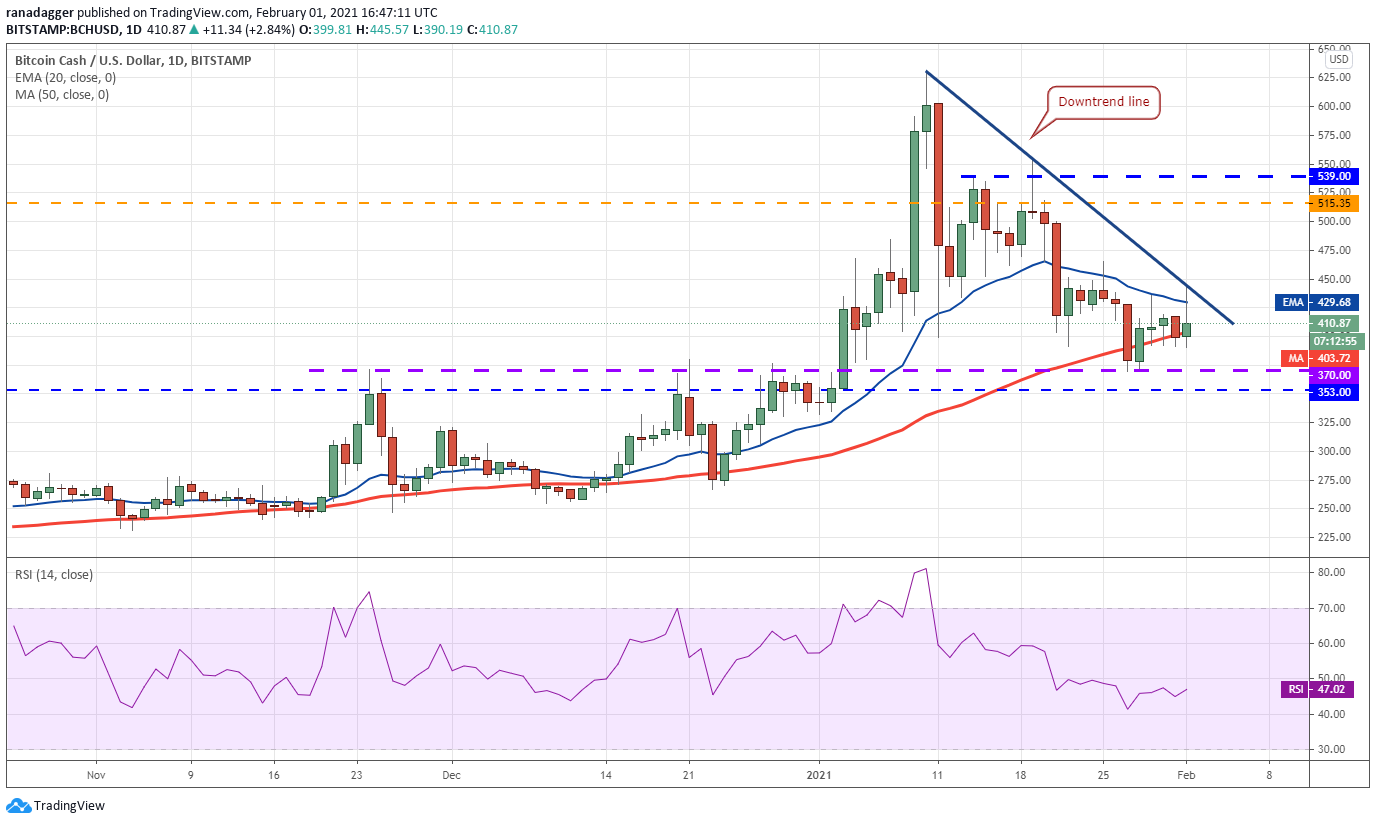 The downsloping 20-day EMA and the RSI just below the midpoint suggest the bears have a marginal edge.

Contrary to this assumption, if the bulls can push the price above the downtrend line, the BCH/USD pair may rally to $465 and then to $539. If the price turns down from this resistance, the pair could extend its consolidation for a few more days.

Binance Coin (BNB) soared above the previous all-time high at $47.2187 and hit a new high at $50.60 today. Whenever the price of an asset class makes a new all-time high, it shows that the bulls are in command. 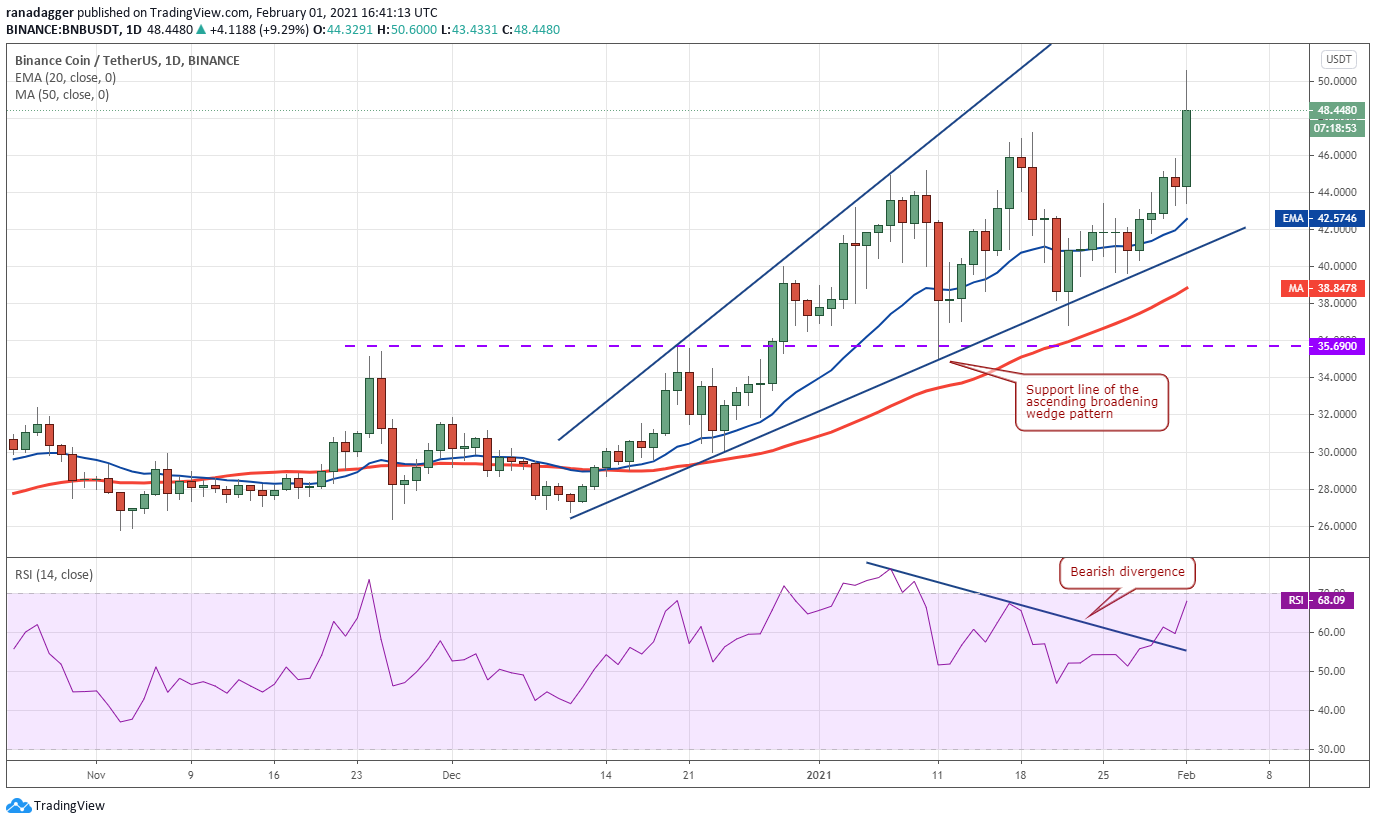 However, the long wick on today’s candlestick suggests profit-booking near the psychological resistance at $50. If the price fails to rise and sustain above $50, the BNB/USD pair could consolidate in a tight range for a few days.

A breakout and close above $50 could start the next leg of the up-move that may reach $60. Conversely, if the bears sink the price below $46, the pair could drop to the support line of the ascending broadening wedge pattern. A break below this support could signal the start of a deeper correction.

The bulls and the bears are locked in a battle for supremacy in the $0.325 to $0.35 zone for the past three days. Although the bulls pushed Stellar (XLM) above $0.35 on Jan. 28, 30, and today, they could not sustain the higher levels, which shows traders are booking profits on rallies. 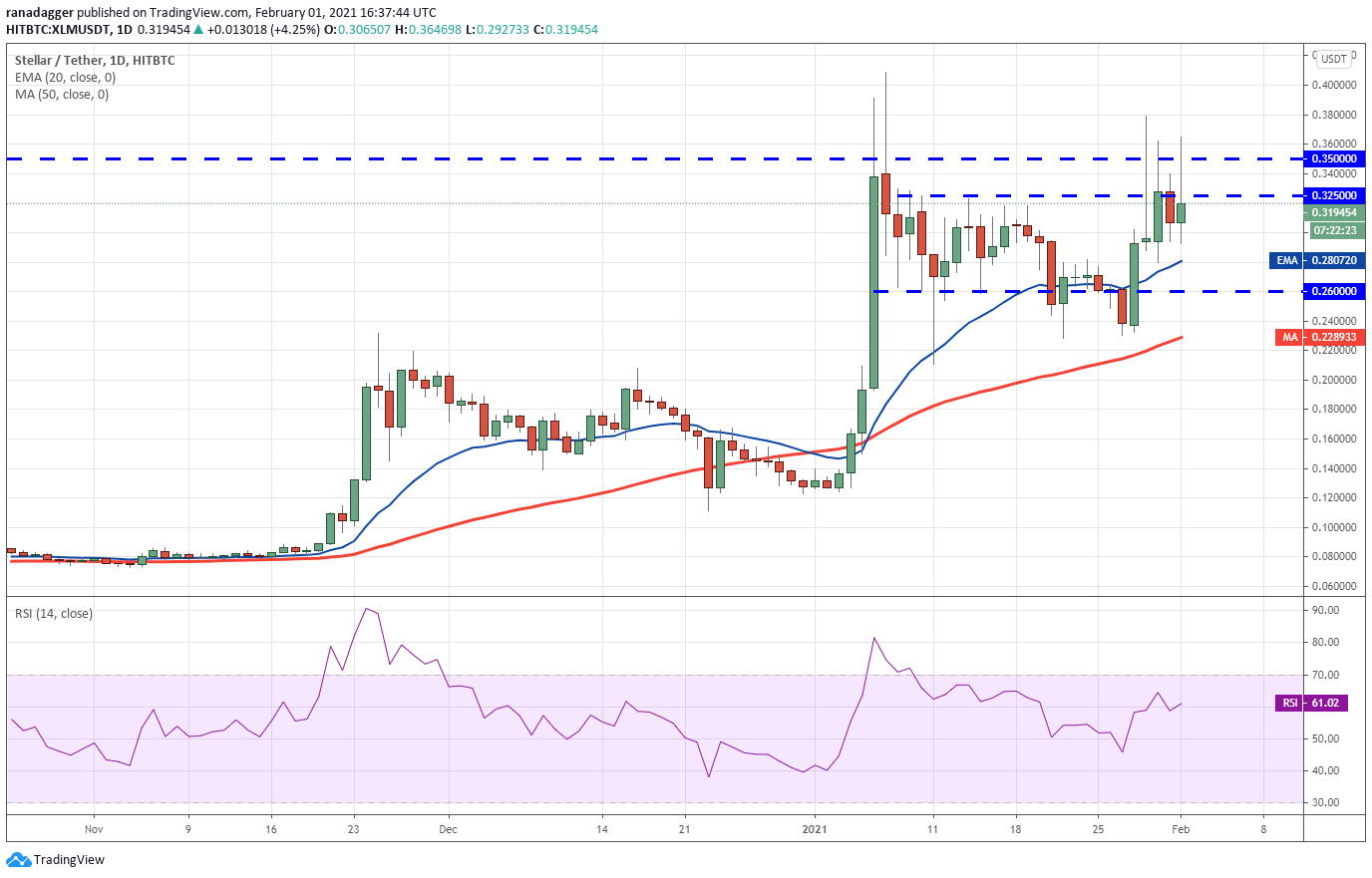 However, the bulls have not allowed the price to sink below the 20-day EMA ($0.28), indicating accumulation at lower levels. The bulls are currently trying to push and sustain the price above the overhead resistance zone.

If they succeed, the XLM/USD pair could rise to $0.409. A breakout and close above this resistance may start the journey towards $0.50. The rising moving averages and the RSI above 61 suggest the bulls have the upper hand.

This positive view will invalidate if the bears sink the price below the 20-day EMA. Such a move could pull the price down to the 50-day SMA ($0.228).