Bitcoin’s sharp correction may not have broken its uptrend, but several altcoins have signaled that a short-term top could be in place.

After an incredible run-up to nearly $42,000, Bitcoin (BTC) price finally entered a significant correction, and at the time of writing the price is down by about 18%. While the swift drop to $30,402 may not induce sleepless nights from the HODLer crowd, large drops like the one seen over the past 24-hours can easily blow up a leveraged trader's portfolio. The sharp downside move also threatens to wipe out a large portion of the gains accrued over the past few weeks.

Data from Bybt indicates that over $2.7 billion worth of futures contracts has been squared off in the past 24 hours.

Once traders in long positions start getting liquidated due to margin calls, traders who have been waiting to buy withhold their purchases as they expect an even better opportunity to buy at a bargain. This lack of demand and excess supply trigger steep falls like the one seen today. 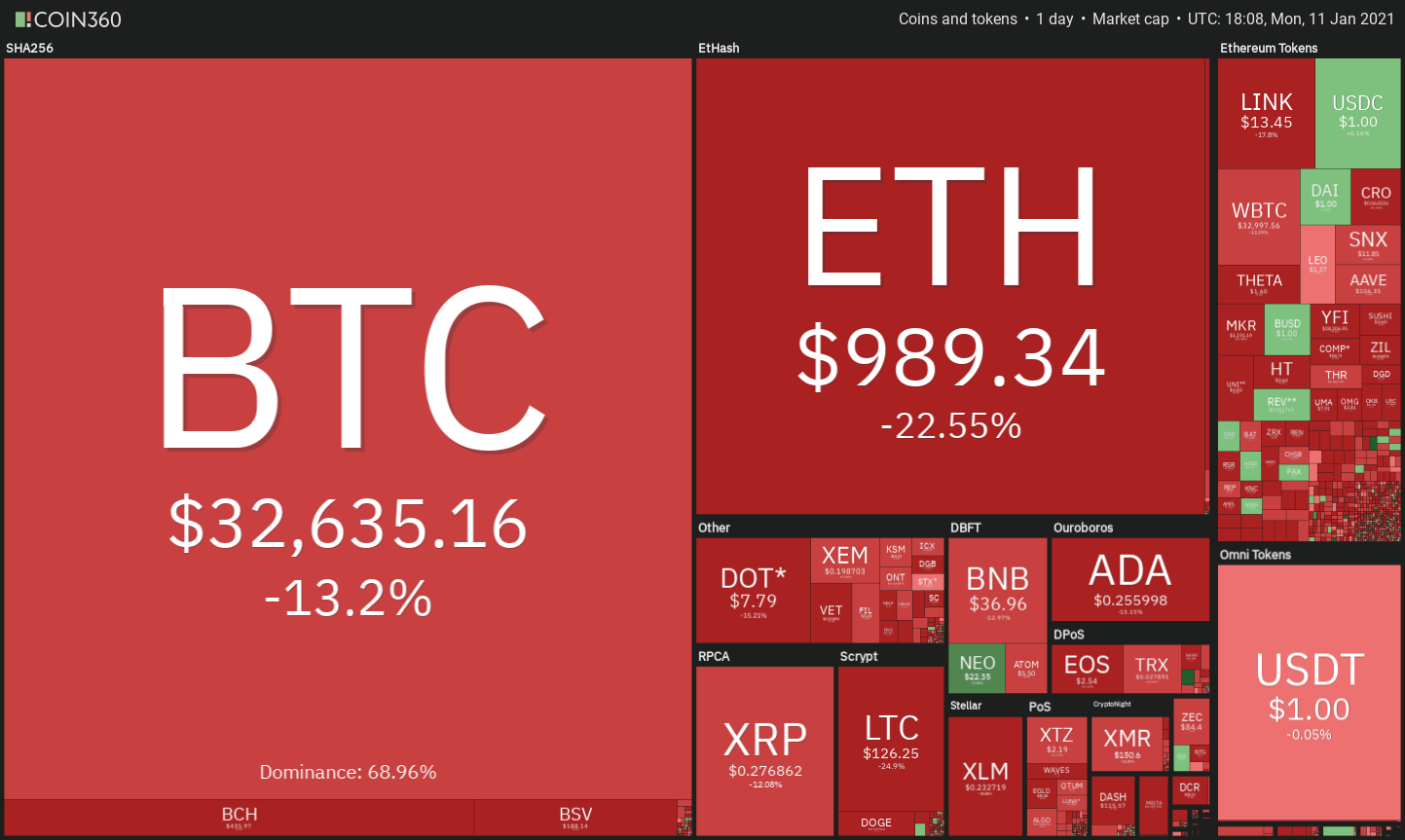 Similar to how resistance levels fail to stall a rally backed by strong momentum, during panic selling, support levels fail to arrest the decline. Professional traders usually do not step in to catch a falling knife. They prefer to wait for the excess froth to clear and the selling to subside before jumping in to buy.

Let’s study the charts of the top-10 cryptocurrencies to identify the levels that may act as strong support. 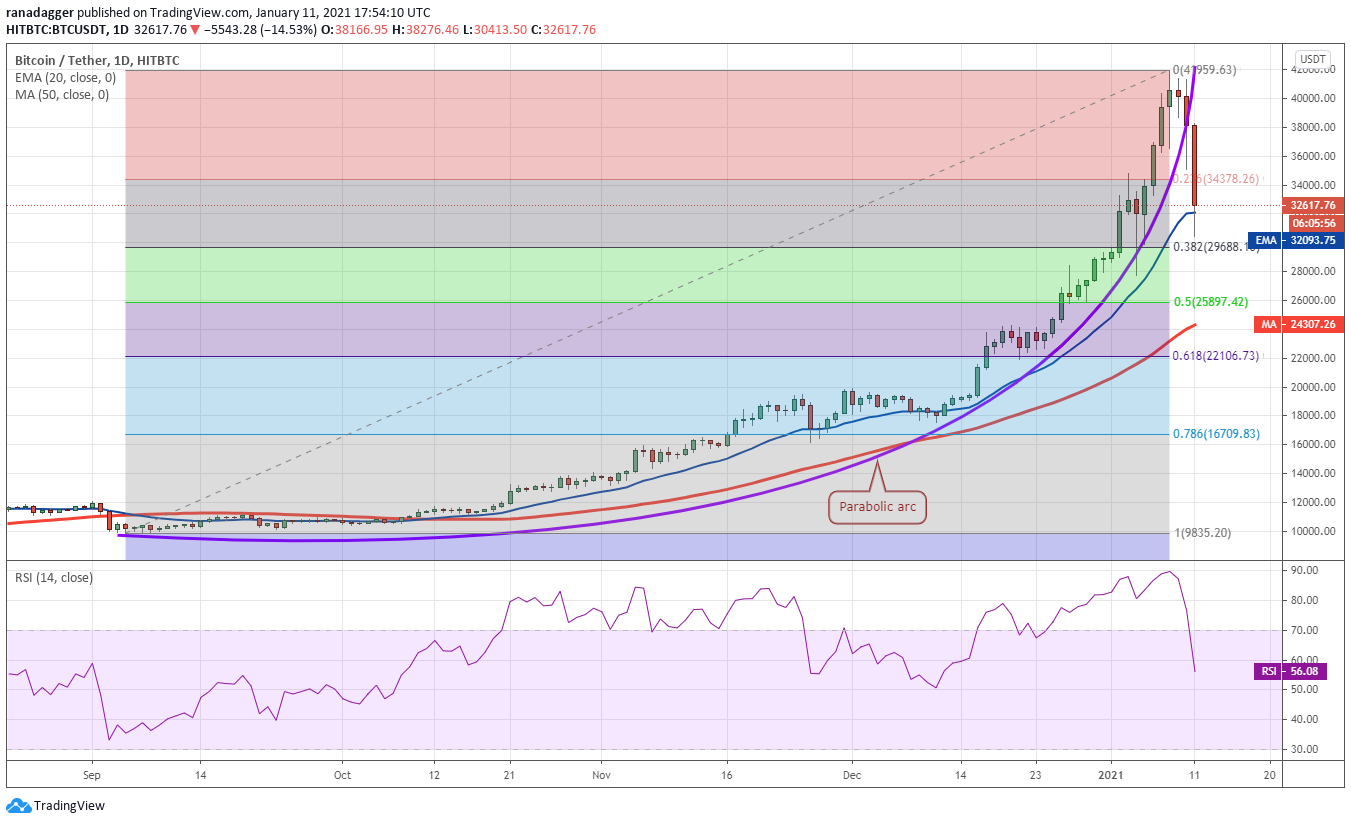 If the rebound off $29,688.10 sustains, it will be considered as a normal correction after an extended bull run. The bulls will then again attempt to resume the uptrend.

A deep fall to this level will suggest that the upside momentum has broken and the pair may chalk out a new trend.

Ether (ETH) made a long-legged Doji candlestick on Jan. 10 and that was followed by a sharp fall today, which suggests aggressive profit booking by the traders. The bulls are currently trying to defend the 20-day EMA ($956). 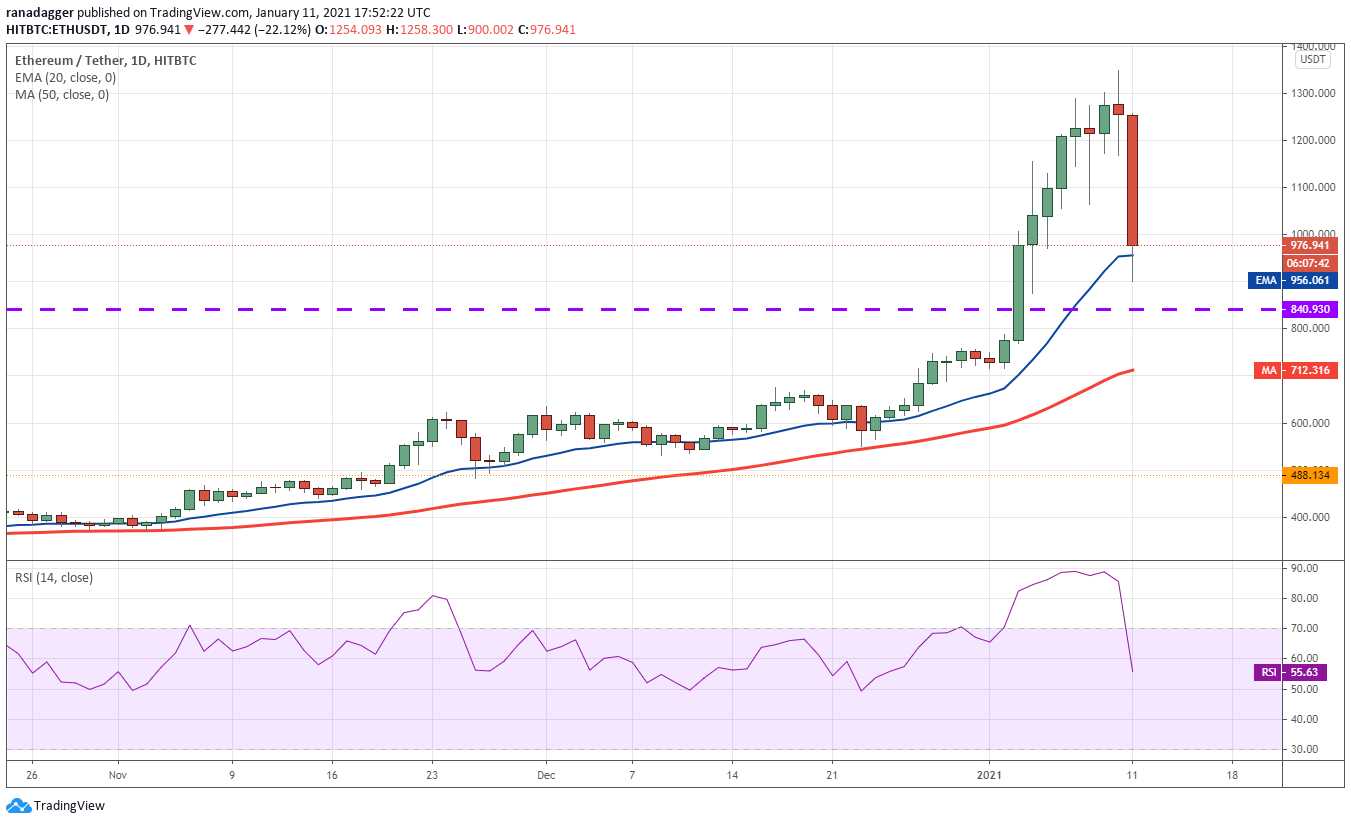 If they succeed, the ETH/USD pair may rise to $1,100 where the bears may again step in and sell the relief rally. If the price turns down from this resistance but the bulls do not allow the price to dip below the 20-day EMA, it could result in a consolidation for a few days.

On the contrary, if the bears sink the price below the 20-day EMA, the next stop is $840.93 and if this support also cracks, the decline may extend to the 50-day SMA at $712. The deeper the fall, the longer it will take for the bulls to stage a recovery.

XRP could not rise above the overhead resistance at $0.384998, which suggests that traders lightened their positions on relief rallies. The altcoin broke below the 20-day EMA ($0.30) today after staying above it for the past three days. 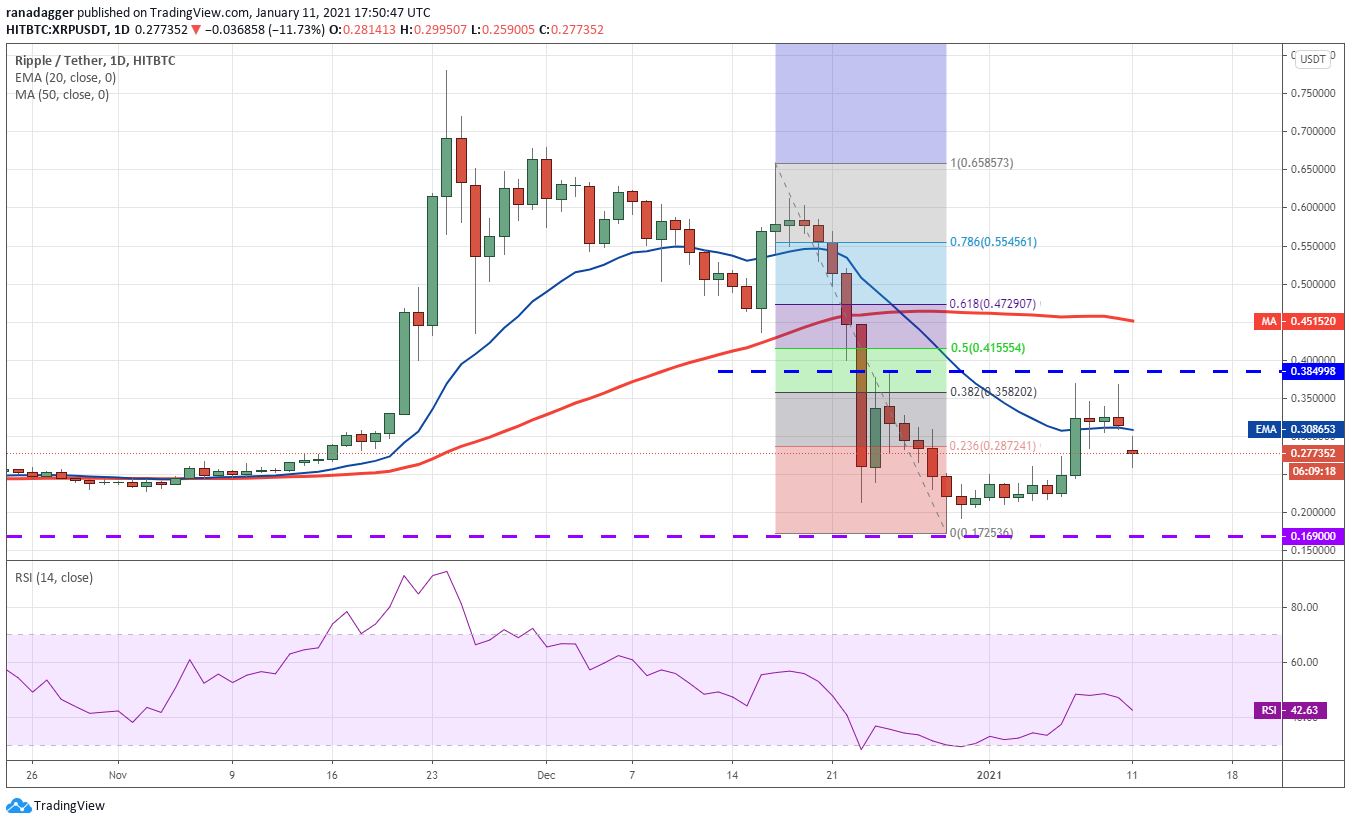 The XRP/USD pair could now drop to the support at $0.169 where the buyers are likely to step in. A strong rebound of this support will indicate that the pair may remain range-bound between $0.169 and $0.384998 for a few more days.

Contrary to this assumption, if the bears sink and sustain the price below $0.169, the downtrend could resume with the next stop at $0.10.

After struggling to break out and sustain above $180 for the past few days, Litecoin (LTC) succumbed to an aggressive bout of profit-booking today. The altcoin plunged below the 20-day EMA ($142) and is currently attempting to stay above the $120 support. 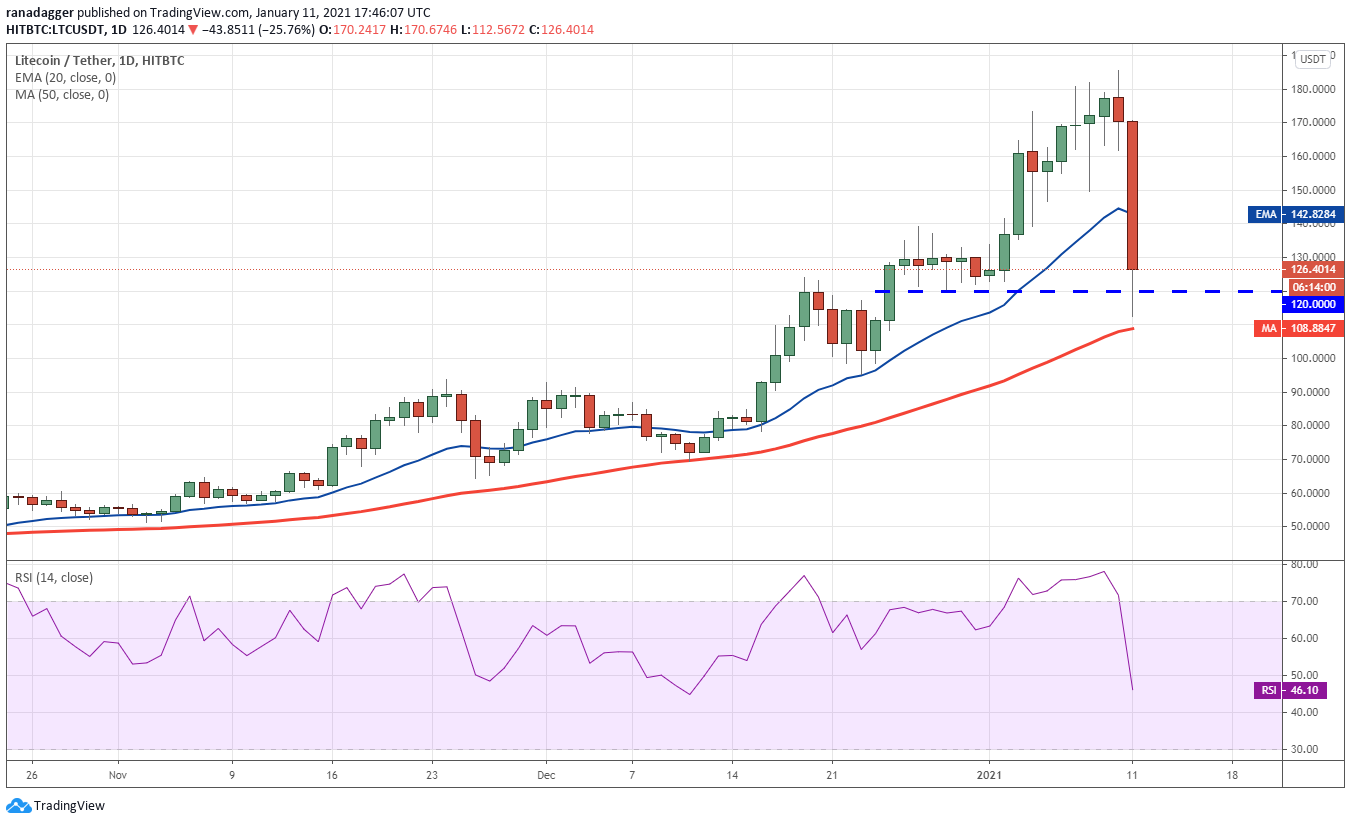 If the LTC/USD pair rebounds off the current levels, the bulls may attempt to resume the uptrend but any rise is likely to face aggressive selling at the 20-day EMA. If the bulls push the price above the 20-day EMA, the pair may try to gradually move up to $160.

If the price turns down from the 20-day EMA, the bears will try to sink the price below the 50-day SMA ($108). If they succeed, the pair may drop to $100 and such a move will suggest a change in trend.

Bitcoin Cash (BCH) soared above the $515.35 overhead resistance on Jan. 9 and followed that up with another strong rally on Jan. 10, which pushed the price to $631.71, just below the $640 target objective suggested in previous analysis. 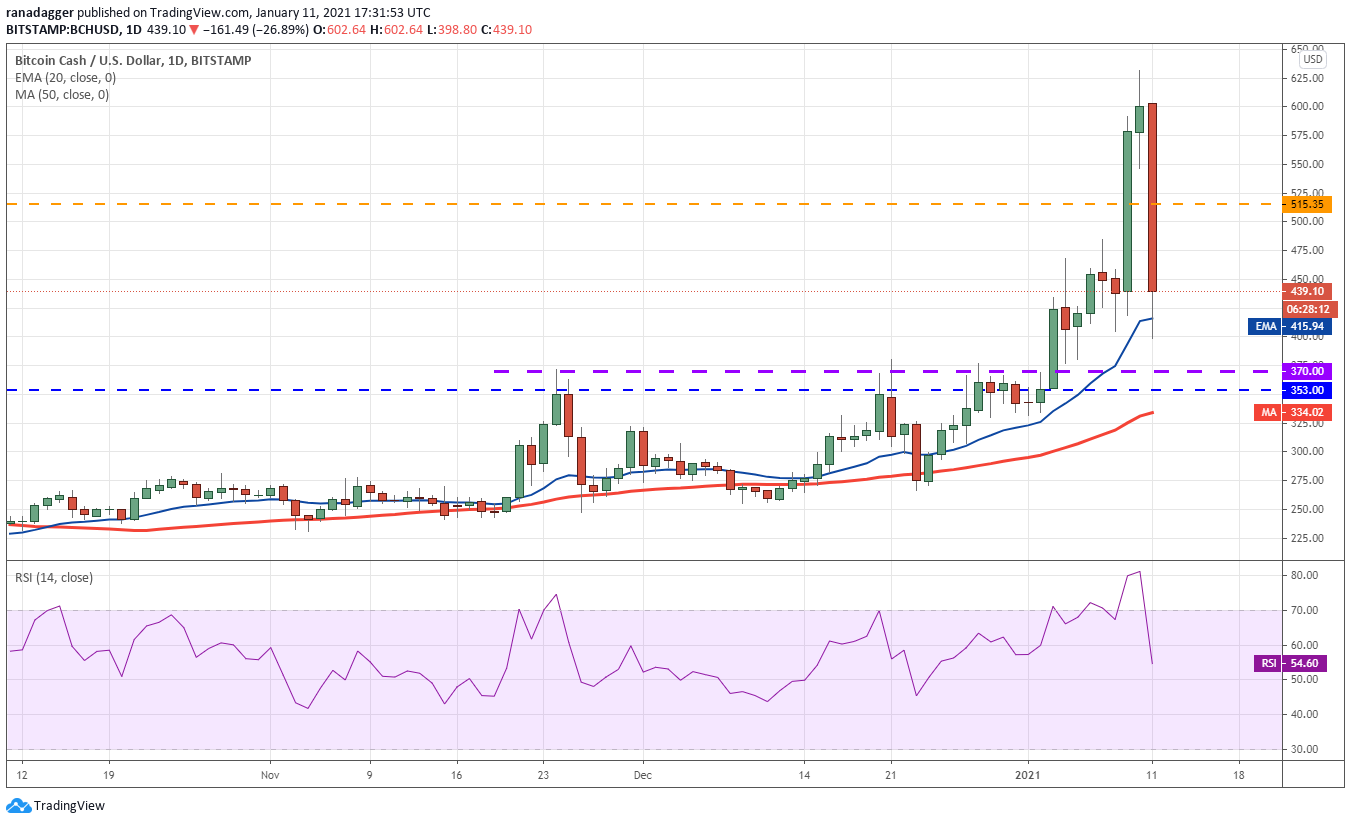 Aggressive profit-booking pulled the price back below the $515.35 level today, which is a negative sign as it shows the bulls could not flip $515.35 into support. The BCH/USD pair has completed a 100% retracement of the rally that started on Jan.9.

Cardano (ADA) broke below the 20-day EMA ($0.236) today, which is just below the 61.8% Fibonacci retracement level at $0.2395088. However, the long tail on the day’s candlestick suggests that the bulls are attempting to defend this level. 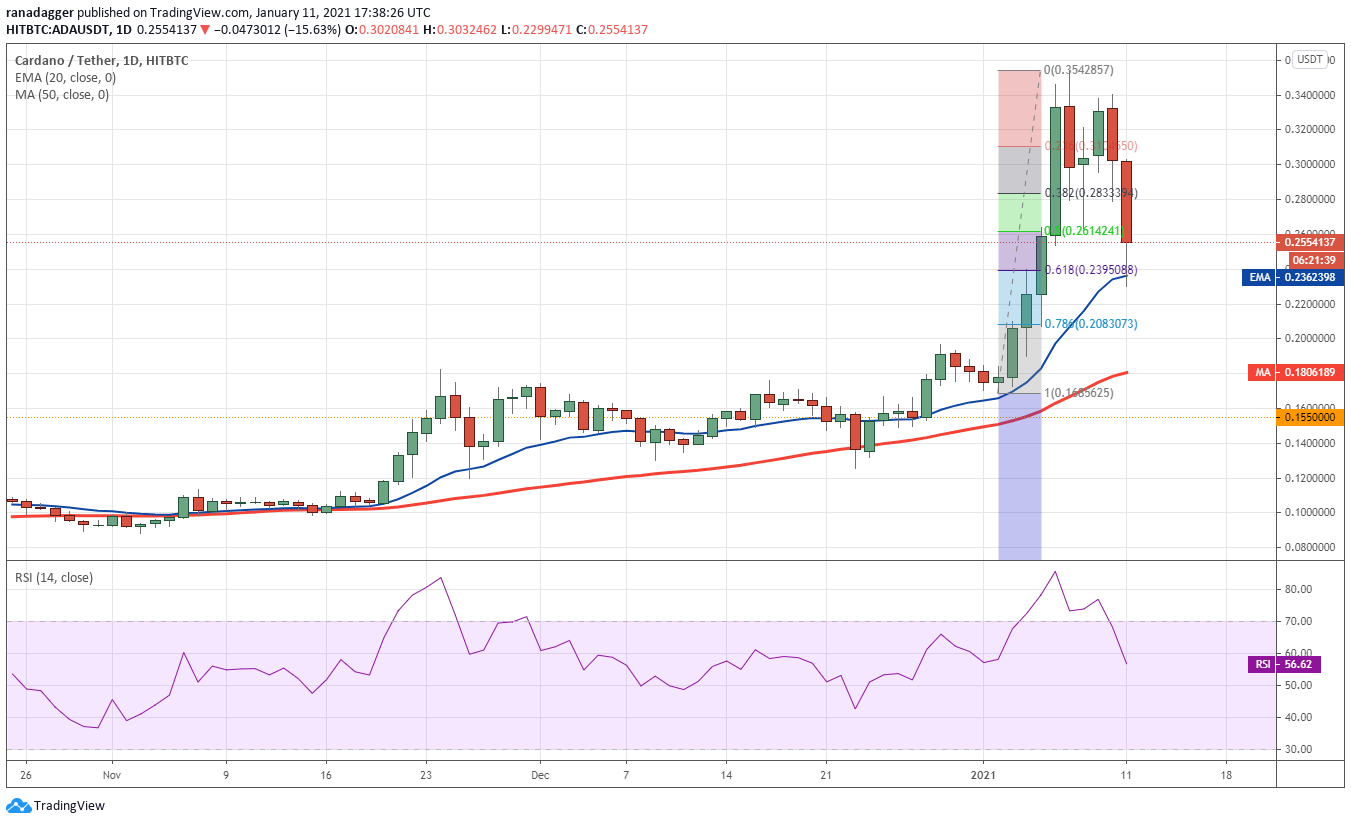 If the ADA/USD pair sustains the rebound, the bulls will again try to resume the uptrend. The first level to watch on the upside is $0.28. If the bulls can drive the price above this resistance, the pair may rise to $0.34.

Contrary to this assumption, if the current rebound fails to sustain or if the price turns down from $0.28, the bears will try to sink the pair below the 20-day EMA. If they succeed, a drop to the 50-day SMA at $0.18 could be on the cards.

Polkadot (DOT) bounced off the 38.2% Fibonacci retracement level at $8.5515 on Jan. 10 but the bulls could not capitalize on the recovery, which indicates a lack of demand at higher levels. 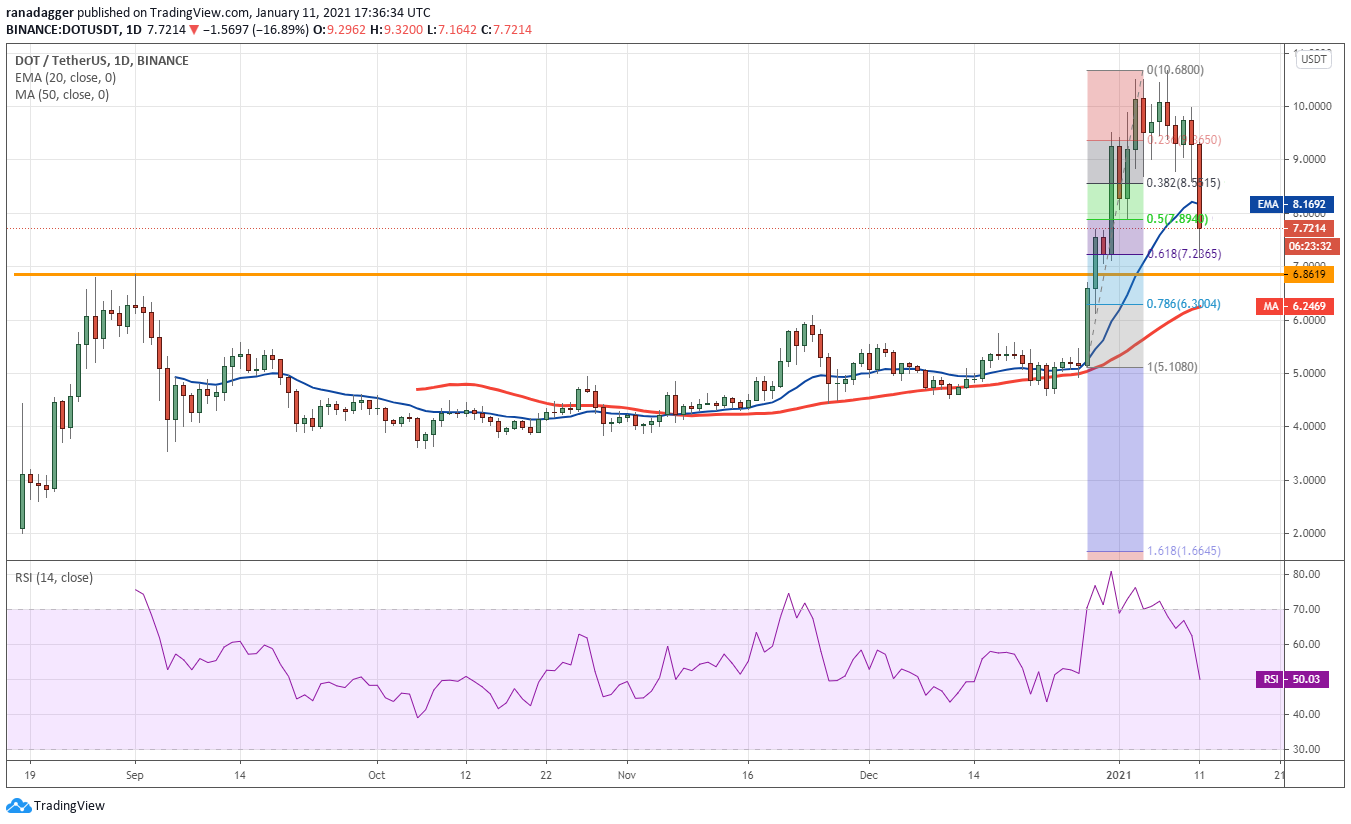 This could have attracted selling by short-term traders, which pulled the price down to the 61.8% Fibonacci retracement level at $7.2365 today. If the bulls flip the $6.8619 level to support, the DOT/USD pair may attempt to resume the uptrend.

Chainlink (LINK) failed to sustain above the $17.7777 overhead resistance on Jan. 10, which could have attracted profit-booking from short-term traders. The selling intensified today and that has pulled the price down to the 50-day SMA at $13.31. 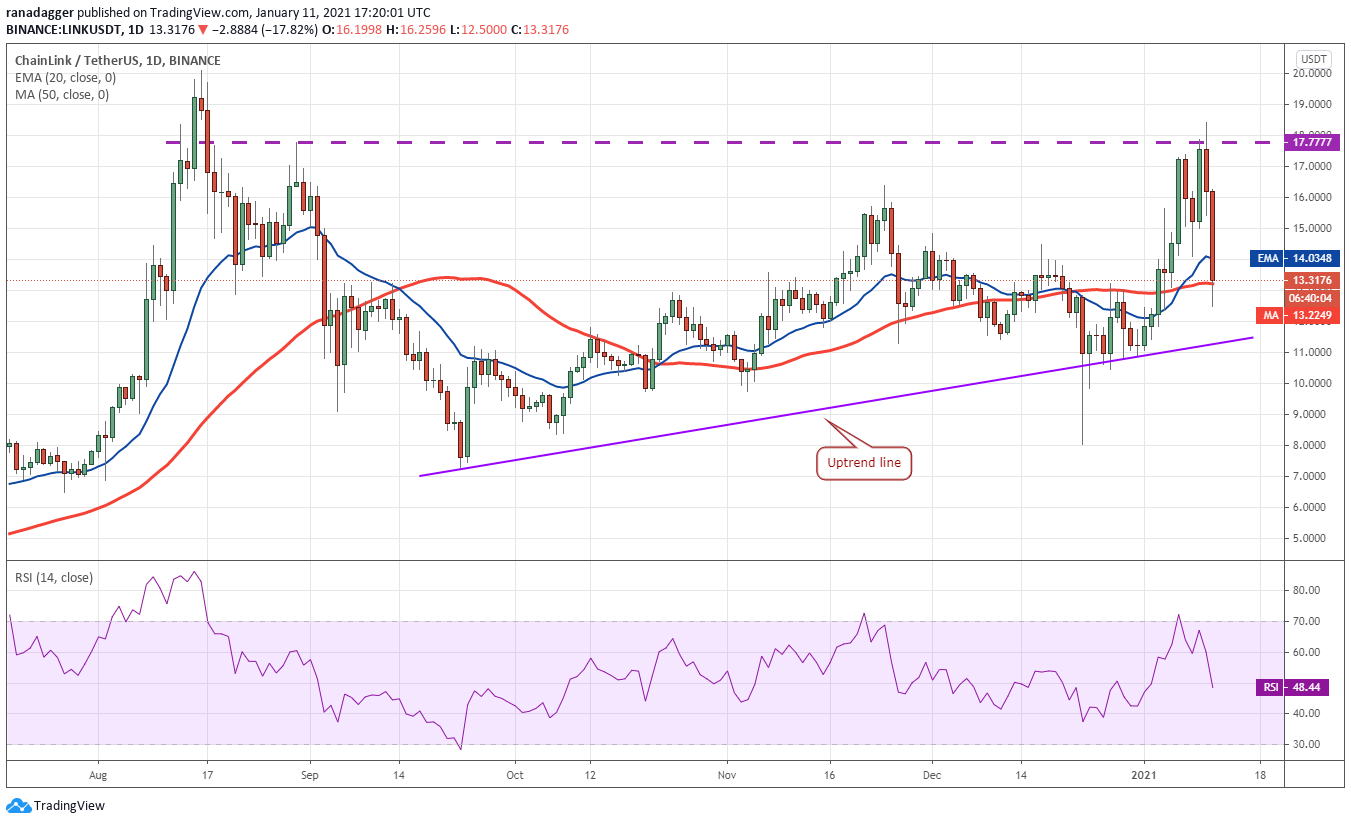 If the price sustains below the 50-day SMA, the LINK/USD pair could drop to the uptrend line. This is an important support to watch out for because if it cracks, the decline could extend to $8.

Conversely, if the pair rebounds off the current levels or from the uptrend line, the bulls will try to push the price above the 20-day EMA ($14). If they succeed, the price may rise to $15 and then to $17.7777.

The long tail on Dec. 10 candlestick suggests the bulls aggressively purchased the dip to 40 but they failed to build upon the recovery today. The bears resumed their selling and have dragged Binance Coin (BNB) below the 20-day EMA ($38.53). 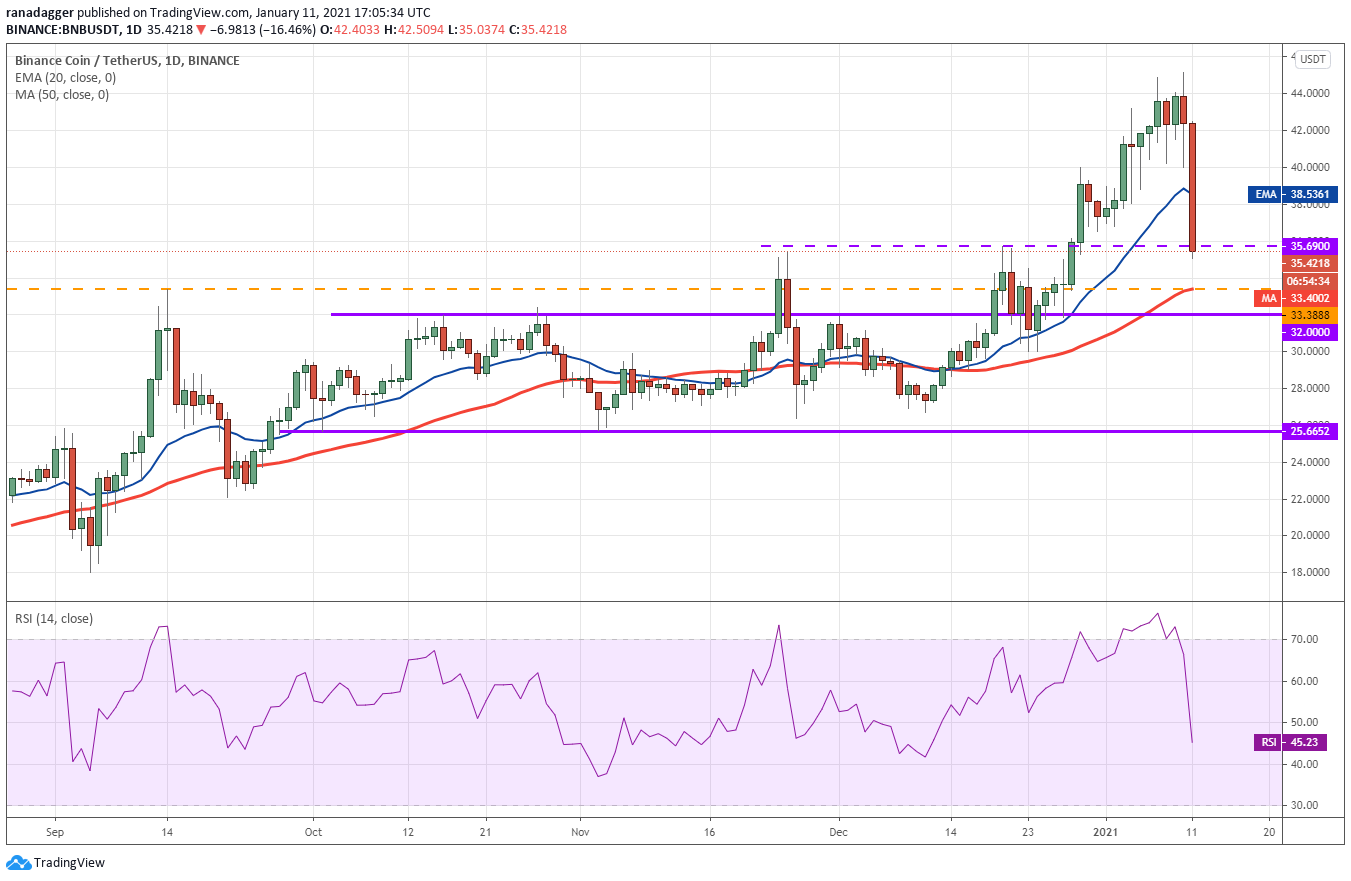 The bulls are currently attempting to defend the $35.69 support. If they succeed, the BNB/USD pair may attempt a rebound that is likely to face stiff resistance at the 20-day EMA.

If the price turns down from the 20-day EMA, the bears may attempt to sink the price to the 50-day SMA ($33.40) and then to $32. Such a move will suggest that the pair may have topped out for the short-term.

However, if the price rebounds off the current levels and rises above the 20-day EMA within the next few days, it will suggest strong demand at lower levels and the bulls may try to resume the uptrend.

The bulls defended the $0.2864 level for the past four days but the failure to achieve a strong rebound showed a lack of demand at higher levels. Stellar Lumens (XLM) broke below $0.2864 and the 61.8% Fibonacci retracement level at $0.232928 today. 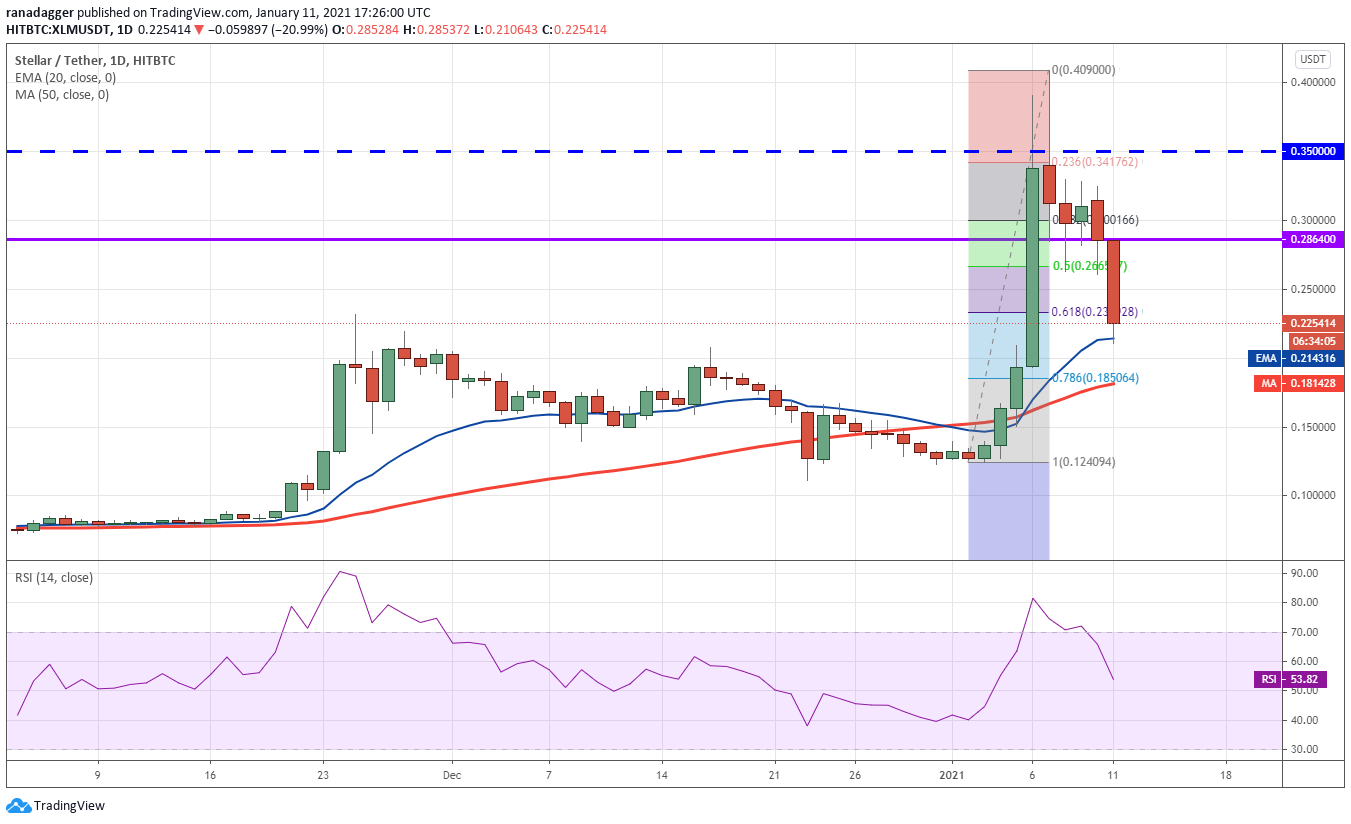 Contrary to this assumption, if the bears sink the price below the 20-day EMA, it will suggest traders are not buying the dip, indicating the rally on Jan. 6 was a bull trap.