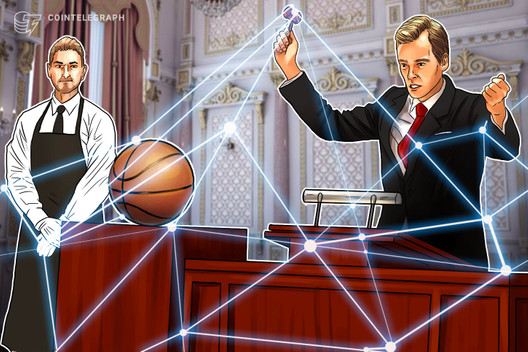 Though their market is small, their reach is mighty. The National Basketball Association’s (NBA) Sacramento Kings are at it again and will tip off a live auction for gear with a blockchain-based app.

Though their market is small, their reach is mighty. The National Basketball Association’s (NBA) Sacramento Kings are at it again and will tip off a live auction for gear with a blockchain-based app.

Fans anywhere can bid on game-worn gear with the new Kings + Golden 1 Center app. The first garb to hit the virtual block tonight will be Kings guard Buddy Hield’s jersey. Proceeds from the virtual auctions will support various charities. Tonight’s will go to Hurricane Dorian relief effort in the Bahamas.

“We have integrated blockchain technology into our business across multiple platforms [...] now our fans will have the opportunity to securely purchase authentic game-worn merchandise in real-time using an innovative blockchain-based solution.”

A long line of development

For a while now, Cointelegraph has reported on the Kings crypto-vation. In 2014, the franchise began accepting Bitcoin payment for merchandise. By 2018, it had partnered with a mining firm to fund scholarships. Last fall, the team and a maker of virtual toys launched production of  Ethereum-based crypto-collectibles.

In 2016, FastCompany named the Kings the “Most Innovative Team in Sports.”

U.S. sports memorabilia is a $5.4-billion industry. Yet the industry lacks standards for authentication. Fans consequently can get stuck with counterfeit merchandise. The Kings/ConcenSys partnership leverages the secondary sports gear market and the power of the blockchain to engage fans. Treum Product Architect Constantin Kostenko said:

“We chose to design this specific implementation with a Kings fan in mind [...] The Ethereum blockchain technology provides transparency, authenticity, and fraud protection to the fan, but the technical details are hidden to offer a familiar user experience.”

How Was It Possible for Bitmain to Oust Its Largest Shareholder Overnight?

Crypto Winter to Spring: Key Factors That Brought Bitcoin Back to Life