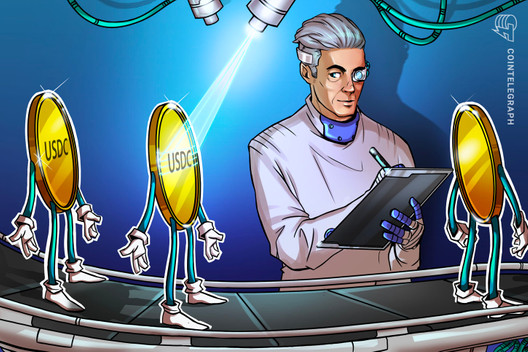 The MakerDAO governance has added the stablecoin USDC as its third collateral type in an attempt to improve liquidity and Dai price stability.

The MakerDAO governance has approved the USD Coin (USDC) stablecoin as the third collateral type accepted in the Maker Protocol, according to a community post on March 17.

The decision was put to an extraordinary executive vote outside of the usual weekly schedule, with the aim of urgently increasing Dai (DAI) liquidity following last week’s market instability.

USDC now joins Ether (ETH) and Basic Attention Token (BAT) as accepted forms of collateral which can be used to open vaults and generate Dai.

The move follows extensive discussion in the Maker community on the merits of adding USDC, and appropriate risk parameters for the token. There was also a public discussion of the potential impact of adding a centralized stablecoin as a collateral type.

Ultimately, the community decided that the swift addition of USDC might address Dai price instability and liquidity issues that have been prevalent since the Ether market crash last Thursday.

The Maker Protocol allows users to generate Dai by locking collateral into a smart contract or vault. The unprecedented price drop of Ether last week caused the collateral value in many vaults to drop beneath the generated Dai value, triggering liquidations.

While the Maker Protocol has mechanisms in place for such events, the scale of the sell-off led to these not functioning as intended, and in at least one case, liquidated collateral was auctioned off for 0 Dai.

The eventual debt, after consuming all Dai in the buffer, was around $4 million.

This has triggered the first MakerDAO debt auction, to be held at approximately 10:28 EST on March 19. The debt auction mechanism is also specified within the Maker Protocol, although this is the first time that it has had to be used.

As Cointelegraph reported, the Maker governance proposed adding USDC as a collateral type on March 16. By its very nature, a stablecoin is not exposed to market instability. The Maker governance has also implemented a Collateral Liquidation Freeze mechanism, to act as a potential circuit breaker, in case such a situation happens again.