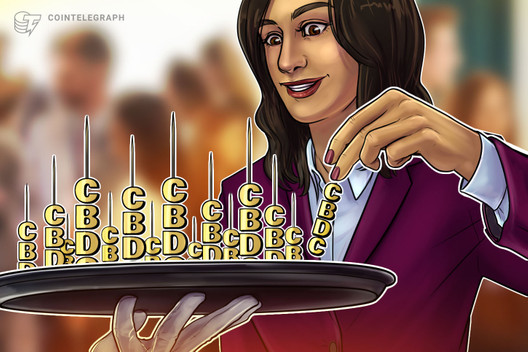 ECB executive board, Yves Mersch, believes that the main impediment for CBDC is philosophical rather than technological.

A number of countries like China and Sweden are already experimenting with central bank digital currencies (CBDC). The implementation of this new type of money requires a number of aspects including tech advancement and specific regulation. According to a key official at the European Central Bank (ECB), the main challenge of CBDC is rather philosophical than technological.

Yves Mersch, executive board member at the ECB, has again discussed CBDC issues at an AMA session hosted by Consensus: Distributed on May 11. At the session, the ECB executive reiterated that the central bank remains engaged with CBDC issues and is working closely with the global central bank community regarding CBDC development.

Earlier today, Mersch delivered a keynote speech devoted to global CBDC issues. The ECB official said that one of potential Eurozone-wide CBDC designs would require the ECB to handle a massive amount of accounts — from 300 million accounts up to 500 million accounts. To date, the ECB is operating only about 10,000 accounts, Mersch noted.

In the latest AMA session, Mersch expressed confidence that modern technology can enable the ECB to process as many as 300 million accounts. When AMA host Aaron Stanley questioned the feasibility of such a big increase of accounts under the ECB’s operation, Mersch said that the main impediment to CBDC adoption is philosophical rather than tech-related.

“I’m surprised that you as a tech fan would say that it is not possible to make 300 million bank accounts with modern technology. It's a huge operation and challenge without any doubt. But in theory, it’s not a technological constraint, it’s a philosophical constraint on how you run your society.”

During the AMA, the ECB executive also provided a rough plan of how the central bank is working on CBDC implementation. According to Mersch, the ECB is close to moving from the analytical phase of exploring CBDC to making related policy decisions and starting tests. The official explained that the ECB wants to be ready to implement CBDC by the moment when consumer demand sparks in future.

“By that moment, we want to be ready. And that’s why we’re not only studying. What we are doing right now is at the analytical phase, but we want to be ready to move very quickly to the political phase and make policy decisions. [...] We will also initiate experimentation on the basis of the different scenarios [...] during the next couple of months.”

Earlier today, Mersch pointed out that cash remains one of the most popular payment methods in Europe, with 76% of all transactions in the euro area are carried out in cash. Highlighting the ECB’s focus on retail CBDC implementation, Mersch assured that the central bank is doing its best to provide the CBDC solution when it’s needed. “If and when time comes, we want to be ready and let me assure you we will be ready,” he said.

The issue of CBDC came under spotlight during another Consensus 2020 AMA devoted to the Digital Dollar Project. At the AMA session, J. Christopher Giancarlo, former Chair at the Commodities and Futures Trading Commission, raised some concerns about China’s human rights abuses and its planned digital renminbi.