Lightning Networks Has Yet to Strike Adoption, but Don’t Count It Out 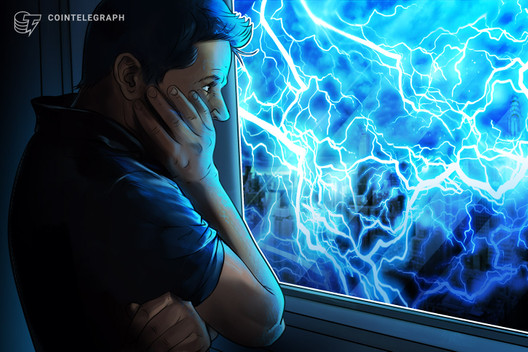 Recent studies have shown the Lightning Network is struggling, but are these teething problems or longer-term issues?

For a currency to be considered useful as money, it has to serve three fundamental purposes. It should function as a medium of exchange, as a store of value and as a unit of account. The fact that Bitcoin doesn’t fulfill all of these purposes to an adequate extent at least partially explains why it hasn’t gained the widespread adoption that many of its earlier supporters had hoped for.

There are two main challenges. Firstly, Bitcoin is considered too slow to serve as a satisfactory medium of exchange, with transactions taking anywhere from several minutes to days to get confirmed. Secondly, at times of high network traffic, transaction costs can soar. When Bitcoin was at its all-time high in December 2017, it could cost as much as $55 to make a transaction happen.

The Lightning Network emerged as a solution to the problem. It was first proposed in 2015 by developers Joseph Poon and Thaddeus Dryja. It uses the concept of off-chain payment channels so that two parties can send and receive Bitcoin between one another instantly. Once the parties close the channel, the final balances are broadcast to the Bitcoin network.

Because payments using the channel aren’t dependent on being included in the blockchain until the end, the Lightning Network is much faster than the Bitcoin network. Transaction fees are only payable on the final settlement when the channel is closed. Blockstream was the first to start using the Lightning Network in 2018. There are now various groups working on different implementations.

Was the lightning just a flash?

Over recent months, various reports have started to emerge that don’t appear to show the Lightning Network in the most favorable light. In February of this year, a multinational team of academics published a yet-to-be-reviewed paper indicating that the network was becoming increasingly centralized, showing high Gini coefficients in node centralization and wealth distribution. A coefficient of 0.88 in node distribution corresponded to 10% of nodes controlling 80% of the Lightning Network.

This centralization could have already been explained in a paper published late last year by a team of Hungarian researchers, later picked up by digital preservation expert David Rosenthal on his own blog. This research, titled “A Cryptoeconomic Traffic Analysis of Bitcoin’s Lightning Network,” uncovered that the transaction fees earned were so low that it was “economically irrational” to operate a node on the Lightning Network. The research also pointed out that due to the small scale of the network, privacy was a further shortcoming, as it was too easy to infer payment sources and destinations.

These points are intriguing, as they appear to raise a chicken-and-egg scenario. Node operators are likely to be deterred by the low transaction fees, and thus from opportunities to earn from the Lightning Network. At the same time, without enough node operators to run the network, the user experience isn’t going to be attractive enough to bring in people wanting to use it as a payment solution.

The numbers certainly appear to back up the low uptake of the Lightning Network. According to BitcoinVisuals, there is currently around $8 million in cumulative capacity across all channels — i.e., under 1,000 Bitcoin. Compare this with Bitcoin’s market cap, which is hovering around $165 billion, and it comes down to less than 0.005% of circulating BTC.

Elsewhere, second layer Ethereum platform Matic Network announced via Twitter that it was collaborating with interoperability protocol RenVM to support BTC directly on Matic sidechains. According to the announcement, the new feature would give Matic “somewhat similar capabilities as the Lightning Network.” Matic’s co-founder and chief operating officer, Sandeep Nailwal, explained to Cointelegraph how an interoperability protocol gives this feature the edge over the Lightning Network as a single-chain solution:

“Interoperable BTC will provide more features, use cases, and avenues to use BTC than if it’s only operating on Lightning and only able to do micropayments. Making BTC available on Ethereum VM sidechains is not only a great solution for payments and integration to Defi use cases, but it also offers the potential for innovative and exciting integrations with gaming and Ethereum’s broader DApp ecosystem.”

“Lightning payment channels create a capital inefficiency, as they require both parties that form a channel to lock up funds rather than just the payer. Another issue is the liveness requirement, which forces parties to constantly monitor the chain as long as a channel is open. I think these two drawbacks explain the lack of usage of such systems.”

Lightning at the end of the tunnel?

None of this is to say that the Lightning Network is doomed to fail, and it still has plenty of supporters. Twitter’s Jack Dorsey is one notable example, having invested in Lightning Labs and introduced the Lightning tipping feature to his social platform.

Bitfinex has also been an advocate of the Lightning Network, having launched support for it in December last year. The crypto exchange also partnered with Bitrefill, enabling its users to shop online and pay with BTC using Lightning channels. Roy Sheinfeld, a co-founder of a Lightning-powered payments app Breez, told Cointelegraph that the network simply needs more time but is doing well in terms of adoption:

“Lightning needs to mature before attracting mainstream users, but it has come a long way in a very short time. In the past few months, we've witnessed Lightning going mobile with apps like Breez and Phoenix, gaming solutions such as Zebedee are starting to emerge, and we see the first fiat-to-Lightning on-ramp solutions like Sparkswap and Escher.”

“All active BTC users are demanding a solution like Lightning Network to create liquidity in Bitcoin as a store of value. Otherwise, transacting Bitcoin on-chain creates friction for the everyday user. Going to a cafe and having to wait for twenty minutes to pay for a coffee doesn’t happen using Lightning Network.”

There are arguments for and against the perception that Bitcoin users are demanding a payment solution. Indeed, the uptake of the Lightning Network is currently low compared to the usage of Bitcoin overall. But, this may be because there aren’t enough apps using it yet. However, applications developing on a platform isn’t necessarily an indication that users are demanding them.

Furthermore, although there has been a growing demand for plenty of crypto-related products over the last year or so, it isn’t necessarily apparent that payment solutions have been one of them. For example, crypto-derivatives have become increasingly popular, as have interest-earning applications. But both of these growth areas point to a preference for treating cryptocurrencies as a commodity rather than a currency that fulfills the criteria of being a medium of exchange and a store of value.

If demand for these kinds of products and platforms continues to grow, it would ultimately negate any argument that there’s a requirement for the Lightning Network — or any other payment solution.

Related: Bitcoin Halving Can Have Negative Short-Term Effect on BTC Price — Here’s Why

On the other hand, the debate over whether or not Bitcoin will become a safe haven in the event of an economic downturn continues. Current world events — including the coronavirus outbreak, Brexit, stock markets and commodities slumping, and the uncertainty over the U.S. presidential elections — mean that this theory could soon be put to the test.

If Bitcoin gains adoption as a store of value, it may drive demand for it to become a better medium of exchange, creating a more compelling use case for the Lightning Network. However, the converse is also true. The reality is that Lightning hasn’t been around long enough to validate its utility. It’s also evidently suffering from various maturity issues. The chicken-and-egg scenario — i.e., needing apps and nodes to make it attractive enough to users, but apps and nodes being put off by a lack of users — is a common one that new technologies need to overcome.