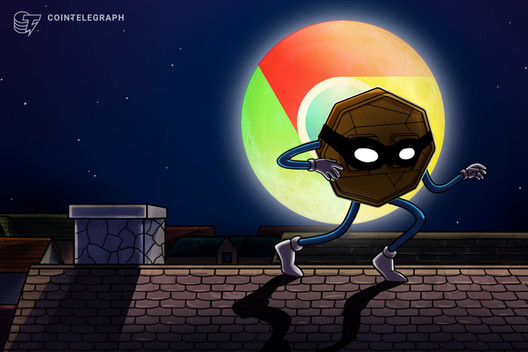 A fake extension on Google Chrome browser impersonated an application for Ledger wallet to steal crypto from users.

Major cryptocurrency hardware wallet supplier Ledger has warned its users about another phishing attack trying to steal their crypto — this one using a Google Chrome extension.

In a March 5 tweet, the French crypto company specified that there is a fake extension on Google Chrome browser that attempts to steal users’ crypto by asking them to enter their 24-word recovery phrase to access their wallet.

Ledger Live gets removed from the Chrome Web Store

The phishing attack was reported by Catalin Cimpanu, a cybersecurity reporter at business technology news website ZDNet on March 4. According to Cimpanu, the malicious Chrome extension was first discovered by Harry Denley, director of security at blockchain interface platform MyCrypto.

According to the report, the fake Chrome extension is called Ledger Live. It tries to mimic the real mobile and desktop application Ledger Live that allows Ledger wallet users to approve transactions by syncing their hardware wallet with a trusted device. As of press time, the fake Ledger Live extension had apparently been removed from the Chrome Web Store. According to the report, the phishing extension was downloaded at least 120 times before it was taken down.

As reported by ZDNet, the malicious extension was trying to mislead users into thinking that it represented the Chrome version of the original Ledger Live app, which would allow them to check balances and approve transactions via Chrome. Users were apparently offered to install the extension and connect their Ledger wallet to it by entering the wallet's seed phrase — a backup phrase or word seed used to get access to their wallets.

MyCrypto exec Denley, who first uncovered the phishing attack, reportedly ridiculed the malicious extension by claiming that it makes no sense to install and use such an extension with a hardware wallet that is meant to protect funds by storing cryptocurrency offline.

However, Denley still admitted that he would not be surprised if the fake extension has tricked people, adding that it’s a “big problem in the cryptocurrency area, to teach people their private keys/mnemonics should stay offline.” The malicious extension could apparently have misled some users, taking into account the fact that it was advertised by Google’s online advertising platform Google Ads, as reported by Denley. 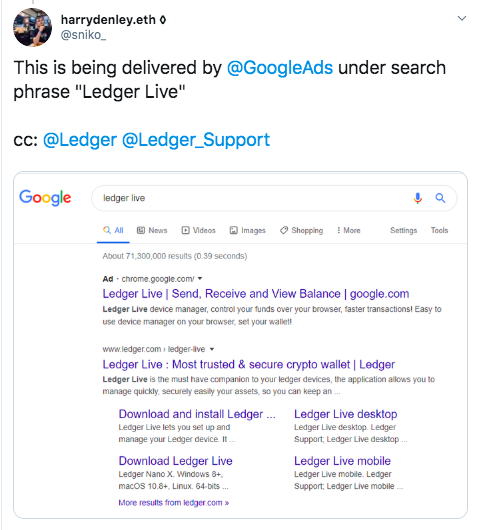 In the warning announcement, Ledger emphasized that the platform would never ask its users for their recovery phrase, urging that to never share the 24-word seed phrase or enter it into any device connected to the Internet. This is, however, not the first time that Ledger users encountered a fake Chrome extension. As reported by Cointelegraph in early January, another malicious Chrome extension stole about $16,000 in privacy-focused cryptocurrency Zcash (ZEC).