Increasing trading volume at Uniswap, a rising TVL and upgrades to its DeFi platform were followed by a new all-time high from LCX.

The emergence of decentralized finance (DeFi) has reshaped the landscape of the cryptocurrency ecosystem, which was once dominated by centralized exchanges like Coinbase and Binance and helped to make it more accessible for users and projects seeking to gain access to the markets.

As DeFi emerged as a cheaper, more accessible option for investors and projects, centralized exchanges saw their reserves of BTC and Ether dip and they began to compete for users as growing numbers of investors opted to give DeFi a try.

Instead of taking a 'centralized only' approach, LCX exchange has adapted its model to offer centralized and decentralized services and during this time its native LCX token climbed to a new record high. 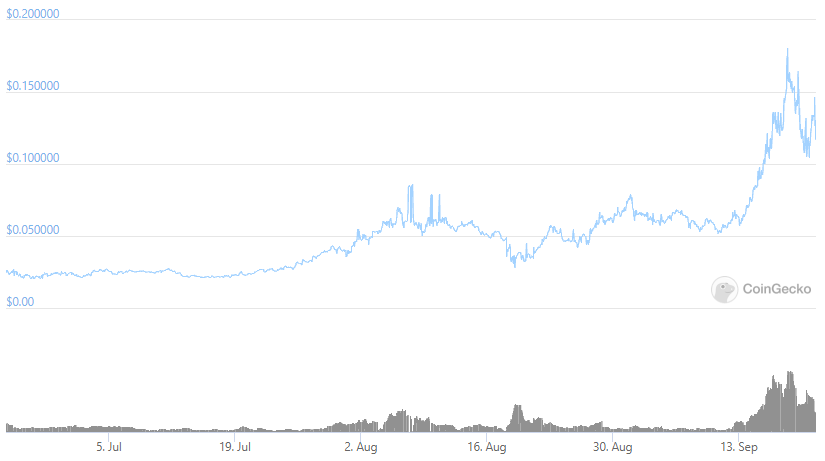 Three reasons for the rising price of LCX include the release of the LCX DeFi terminal, increasing trading volume and total value locked (TVL) on Uniswap and the expansion of the LCX exchange ecosystem.

On Sept. 17, LCX released an update to the protocol's DeFi Terminal 2.0, also known as the Fire Salamander DEX aggregator.

According to LCX, the update aim to improve the user experience and the upgrade improves gas efficiency and integrates six new decentralized exchanges to the interface.

A second reason for the surge in the price of LCX has been the increase in trading activity and available liquidity for the token on Uniswap.

As shown on the chart above, the surge in price seen for LCX lines up with a surge in the 24-hour trading volume on Uniswap.

Another reason for the gains seen in LCX includes the expansion of the LCX ecosystem and the upcoming launch of governance features.

Over the past few months, LCX exchange has added popular altcoins to its list of offerings, including Cardano (ADA), Polkadot (DOT), Hedera Hashgraph (HBAR) and Polygon (MATIC).

At the same time, LCX’s founder Monte Metzger has hosted a series of podcast interviews with the project leads.

These interviews have introduced the communities behind these tokens to the LCX ecosystem and helped explain ongoing collaborations such as the partnership between LCX and Polkadot to build out its security token standard using Polkadot's parachain technology.

This has brought a new level of exposure to the LCX project and shone a light on the fact that the exchange is fully licensed and will offer a legally compliant way for users to access security token offerings (STO). There are also plans to roll out a governance token for the LCX DEX and this aligns with the popular trend of DeFi exchanges rewarding early stakers with governance tokens.