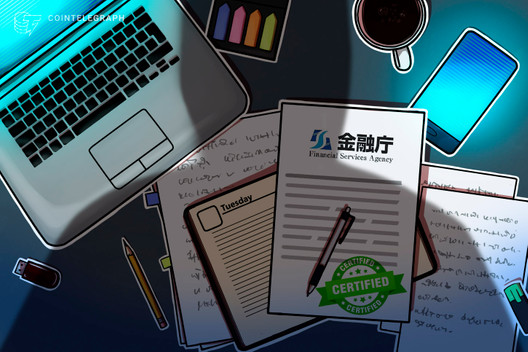 JVCEA is the official self-regulatory organization for the cryptocurrency industry in Japan authorized to create regulations and policies for cryptocurrency exchanges in the country.

Cointelegraph has reached out to JVCEA for comment but has not received a response as of press time.

As of March, there were 21 registered and licensed exchanges in Japan, with three additional companies registered as second-class members. These were major American crypto exchange Coinbase, Digital Asset Markets and Tokyo Hash.

In January, the FSA officially proposed cutting the leverage cap for cryptocurrency margin trading. The FSA reportedly planned to put the order into practice in April once a revised version of the Financial Instruments and Exchange Act enters into effect.

JVCEA enacted a leverage cap of 4x last year, after which some cryptocurrency exchanges in the country reduced their rates. However, some local economic experts suggested that the rate should be further lowered to 2x in order to match those in other jurisdictions such as the European Union.