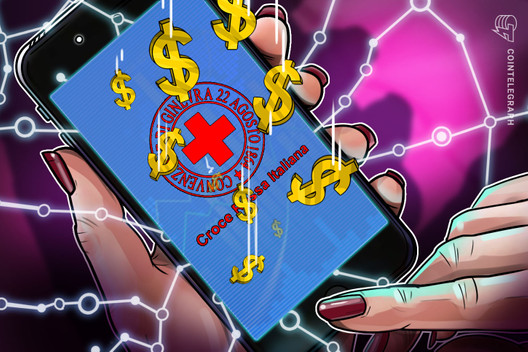 A cryptocurrency fundraising initiative for the Italian Red Cross has tripled its initial campaign goal of roughly $10,000 in less than four weeks.

The Italian Red Cross has raised nearly $32,000 through cryptocurrency donations in less than one month. Roughly $22,000 has been used to finance the construction of the initiative’s first advanced medical post in the town of Castel Gandolfo near Rome.

The funds were spent by the initiative to purchase a pneumatic tent that will house the medical post, in addition to other materials. The tent was erected during Italy’s "blood donation day" and used as a screening station for pre-donation medical examinations.

“With great pleasure, we reached the first main milestone of our fundraising, said Bruno Pietrosanti, the president of the Italian Red Cross. “We are happy to have turned the received donations into a tangible aid and we are excited to have received so much help from the Bitcoin community,” he added.

Cointelegraph spoke to Davide Menegaldo, COO of Helperbit — the firm that set up the Red Cross’s crypto campaign — who stated that the blood donation days will take place on at least a bi-weekly basis for the next four months, with the next event scheduled for April 19.

Menegaldo adds that the “Red Cross team plans to deploy further equipment bought with bitcoin donations” ahead of the next event.”

As of press time, the initiative has raised more than 4 Bitcoins (BTC) or 113% of its second funding target in total. Over $10,000 is still pending usage.

After smashing its first goal of $10,700 in just three days, it only took another two weeks for the campaign to exceed its second goal of nearly $26,000 — with the Red Cross continuing to receive donations.

Menegaldo states that the medical post with basic equipment costs roughly $13,000, while a facility with more advanced equipment can easily exceed $22,000.

While Helperbit’s COO states the firm has endeavored to find merchants in the aid sector that support Bitcoin, he concedes:

“It is clear that this purpose needs to be balanced with the situation in [the] current world, so we will try to find the tradeoff between a full bitcoin-only use case and the current emergency.”

The 2.195 BTC that the Red Cross has thus far spent incurred just 0.55% in total fees — highlighting the efficacy of cryptocurrencies for making donations:

“This initiative showed how it was possible to transform BTC coming from all over the world into a tangible asset, needed during an emergency situation, in just two weeks and with a total much lower than 1%.”

97% of donations were in the form of BTC, with 3% comprising alternative cryptocurrencies. 90% of contributions came from anonymous donors.

Not enough chips to support production of Bitcoin mining rigs