Is Elon Musk Selling His Bitcoin? 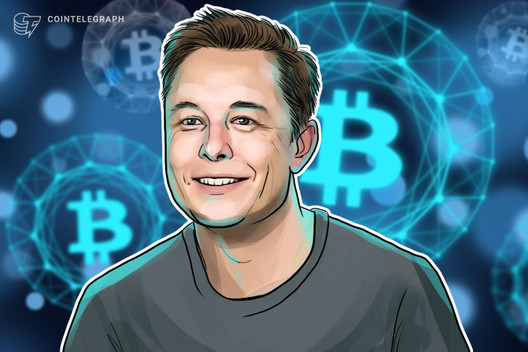 As part of a recent series of nonsensical tweets, Tesla's eccentric founder, Elon Musk, expressed plans to sell all his physical possessions. Are his Bitcoin (BTC) holdings included in the fire sale?

"I am selling almost all physical possessions," Musk tweeted on May 1. "Will own no house," he noted, adding:

"Just one stipulation on sale: I own Gene Wilder’s old house. It cannot be torn down or lose any its soul."

Musk rattled off strange posts to kick off May

Musk followed up his fire sale tweet with a comment describing Tesla's stock price as too high, as well as a tweet demanded the return of freedom to the public.

Several additional tweets included random lyrics from the U.S. national anthem, a claim about his girlfriend's anger toward him, and his baby's apparent Monday due date.

Cointelegraph reached out to Elon Musk for additional details, but received no response as of press time. This article will be updated accordingly should a response come in.

Musk could buy a ton of Bitcoin

Several crypto community members piped up in reaction to Musk's tweet storm. Tron founder, Justin Sun, simply told the tech mogul to "buy Bitcoin", while Hodlonaut asked if the billionaire would store his sale profits in the cryptocurrency.

In the unlikely event that Musk chooses to park all his wealth in Bitcoin after selling his possessions, he would need to find a way to pick up approximately $39 billion worth of the digital asset.

Bitcoin's entire market cap at press time sits at $161,569,180,962, CoinMarketCap numbers showed. Musk could, in theory, purchase about 24% of all BTC in circulation.

Musk would have a hard time buying up that much Bitcoin without spiking the going rate for the asset in the process, however. Cointelegraph recently polled a couple experts on a similar situation — what might happen if Amazon CEO Jeff Bezos tried to buy all circulating bitcoin. The verdict showed the endeavor would likely not work.