Is Binance Getting Too Big? CZ Responds 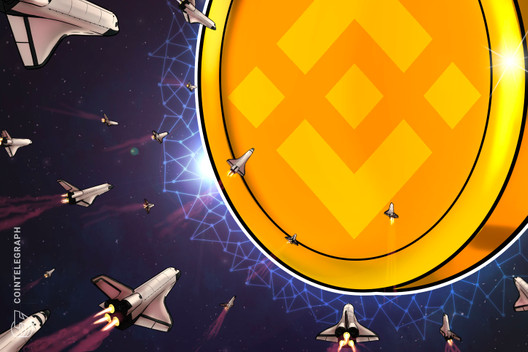 In an exclusive interview with Cointelegraph, Binance founder CZ responded to concerns about the size of his company.

During the discussion, CZ addressed concerns from the crypto community regarding the size and influence of Binance amid the firm’s increasing acquisitions and horizontal expansions.

On the topic of Binance’s increasing presence within the crypto ecosystem, CZ stated: “I think basically there's two sides to it.”

“So there’s the worry about are we too big or not, and then there is why are users choosing us? If we abuse the power that we have, and then abuse our influence, then people would not choose us.”

“So we are quite big, but the reason we're growing is not because we are abusing a monopolistic power,” he stated, adding: “There’s like thousands of other exchanges, the competition is very fierce.”

“People naturally have those kinds of worries. But rest assured, we want to continue to provide value to his users, not destroy value. And the free market works  — if we abuse it, people will leave.”

CZ also asserted that “Binance is still very small, stating: “in terms of market cap compared to any traditional organization, we are tiny.” He continued:

“Even in terms of the number of users where we're tiny as well — all of the crypto users combined is like one one-thousandth of traditional populations, and there are much larger organizations which take one-third of the population, like Facebook.”

“In a free market, [...] people will naturally gravitate toward the guys who are providing better products, better services,” he concluded.

‘Sometimes you get lucky’

During CZ’s fireside chat with the hosts of Virtual Blockchain Week, CZ stated that he never expected to ascend to comprise the top-ranked crypto exchange so quickly — with Binance having risen to become the largest exchange by trade volume within six months of its launch in 2017.

CZ stated that when the platform launched, there were “only two crypto-to-crypto exchanges that were big at the time — they were only English, and only on the web.” With no mobile apps and no major exchanges targeting users outside of the West, CZ stated that he “thought there was definitely room for another exchange.”

“At the time, our goal was ‘let’s try to reach number one in three years’ [...] But y’know, sometimes you get lucky.”

Calibra Rebrands as Novi to Avoid Confusion With Libra

The Bitcoin Pizza Day Numbers Are Actually Worse Than You Thought