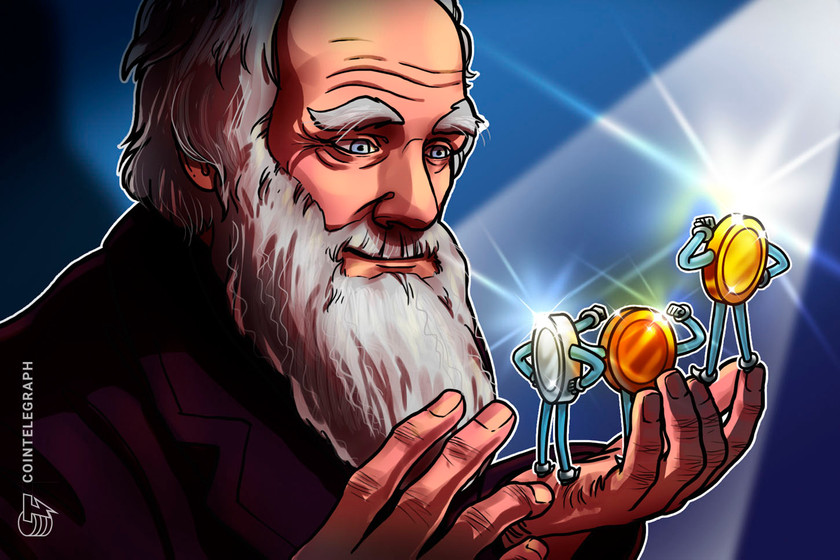 Bitcoin (BTC) and altcoins' markets lost a combined total of up to $602 billion overnight in a shocker brought forth by Elon Musk.

The billionaire entrepreneur did an about-turn on his decision to accept Bitcoin for the electric vehicles offered by his company Tesla. He cited environmental concerns, noting that Bitcoin mining requires many fossil fuel burnings, especially coal.

Bitcoin prices started falling sharply within the first five minutes of Musk's tweets in the late U.S. hours on Wednesday. They further plunged into the Asia-Pacific session on Thursday, logging an intraday low of $46,000 at one point in time, a breakaway from its previous session high of $59,592.

Altcoins tailed Bitcoin to its overnight losses. They collectively shed more than $367 billion off their market cap, led by massive downside corrections in some of the leading altcoins, including Dogecoin, a meme cryptocurrency pushed to explosively high levels lately on Musk's endorsements.

Nonetheless, some altcoins managed to survive the brutal crash owing to their strong fundamental setups in the near term. Let’s take a look at he most notable three.

AAVE turned out to be an exceptional performer as almost all the top altcoins declined.

The ERC-20 token, which serves as a governance token atop the Aave protocol, ended the Wednesday session up 11.62% to $511, despite reaching its all-time high of $640 earlier in the day. It looked evident that Musk's anti-Bitcoin announcement affected AAVE as it did to other altcoins. But unlike its peers, AAVE appeared more resilient to sudden bearish pressure. 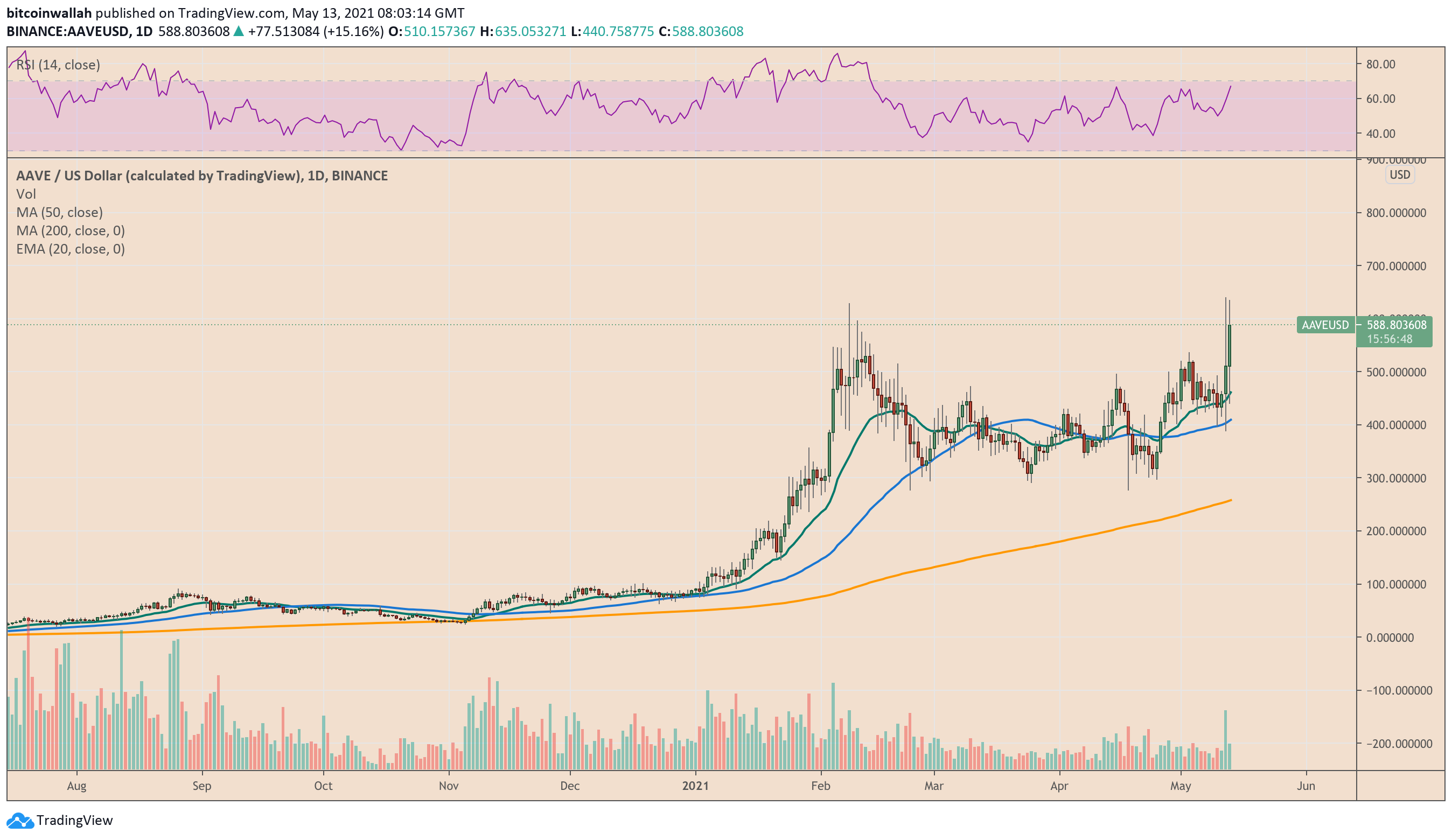 The token maintained its bullish bias entering Thursday, trading for circa $589 as of 0813 GMT.

Fundamentals protected AAVE from serious bearish assaults. At first, Stani Kulechov, co-founder of Aave, revealed that their decentralized finance money protocol had built a "private pool" for institutional players. He noted that the new permissioned pool would serve as an emulator for investors who want to get accustomed to Aave's lending and borrowing services before getting involved in the DeFi ecosystem.

The prospects of institutional involvement kept AAVE's bullish bias intact. The upside sentiment further received a boost from Aave's ballooning liquidity pool; it now holds $12.83 billion compared to roughly $2 billion at the beginning of this year, according to DeFi analytics platform Defillama.

The next asset in the queue that almost got entangled in the altcoins' declining spree but escaped nonetheless is Alpha Finance.

The decentralized asset management platform, now running a homegrown leveraged yield farming protocol named Alpha Homora under its wing, enables its users to submit proposals and vote on operational and strategic decisions should they hold ALPHA, its native token. They can also earn ALPHA should they provide liquidity to Alpha Finance's pool.

The Elon Musk shocker prompted ALPHA to take a breather from its prevailing upside move Wednesday, wherein it was testing its two-month high for a potential bullish breakout. The ALPHA/USD exchange rate fell by almost 23% from its Wednesday top of $2.465.

But, the pair quickly retraced its steps on supportive upside fundamentals, including a new partnership launch and continuing success of the Alpha Homora protocol. 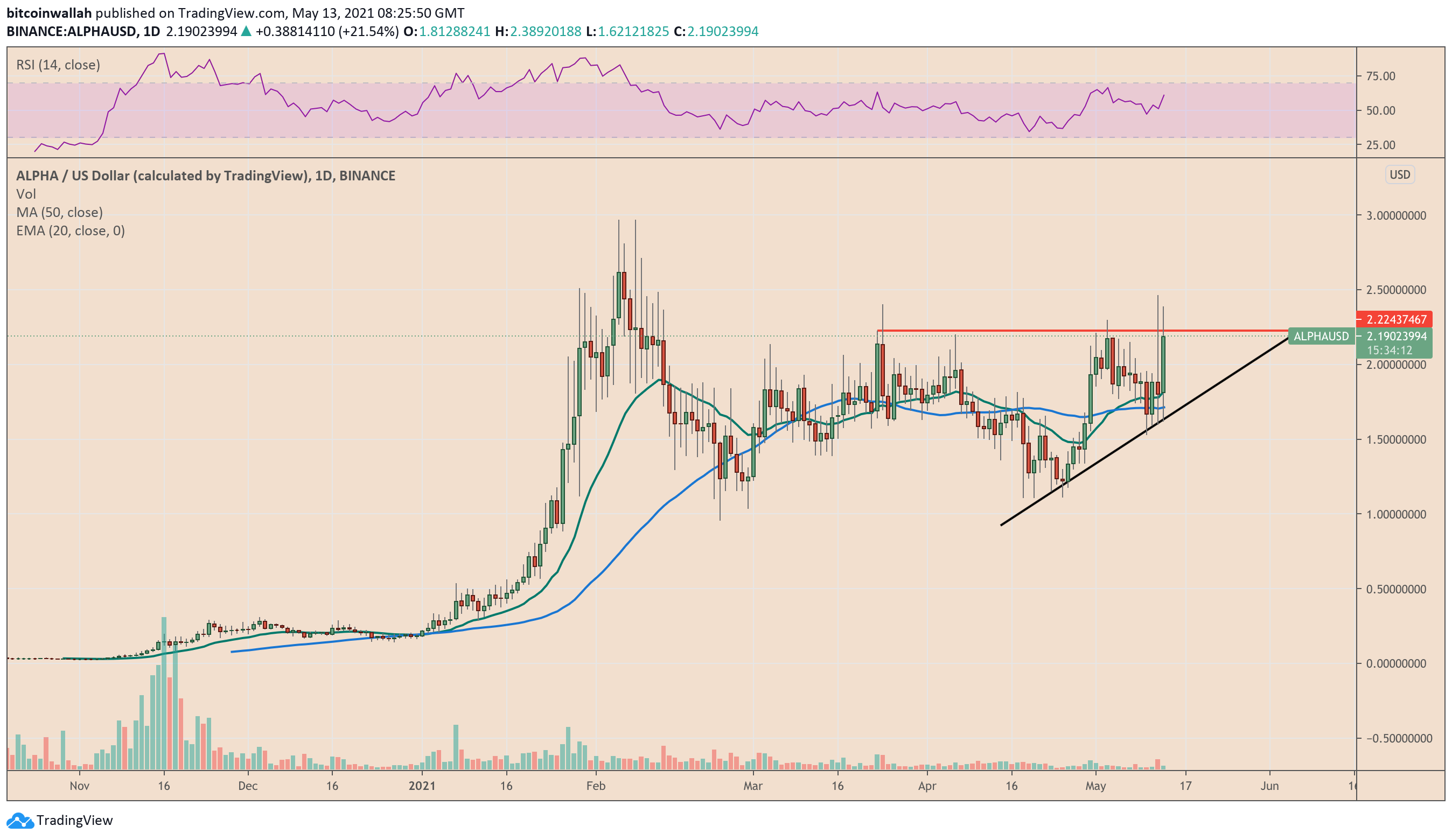 The total volume locked inside the Alpha Homora pools topped at $1.35 billion on May 10 vs. $1.37 billion currently. At the beginning of 2021, the TVL was roughly $188.5 million. The spike shows Alpha Homora has had a successful run so far.

ALPHA/USD has rebounded by more than 20% into the Thursday session, its recovery matching steps with the Alpha Homora TVL. Meanwhile, Alpha Finance announced the launch of Alpha Oracle Aggregator, featuring data from two of the largest data oracles providers, Band Protocol and Chainlink, to "ensure security, scalability, and flexibility."

Ether's positive correlation with Bitcoin prompted a certain degree of gains-slashing on Wednesday night. Nonetheless, the second-largest cryptocurrency by market capitalization remained stronger on medium-term timeframes, much like Aave and Alpha Finance.

The most important takeaway from Ethereum's decline was its ability to hold above key support levels (moving average waves) despite a strong correlation history with Bitcoin trends. The ETH/USD exchange rate closed the previous session down almost 8.45% to $3,826 versus its intraday high of $4,055 on Thursday. 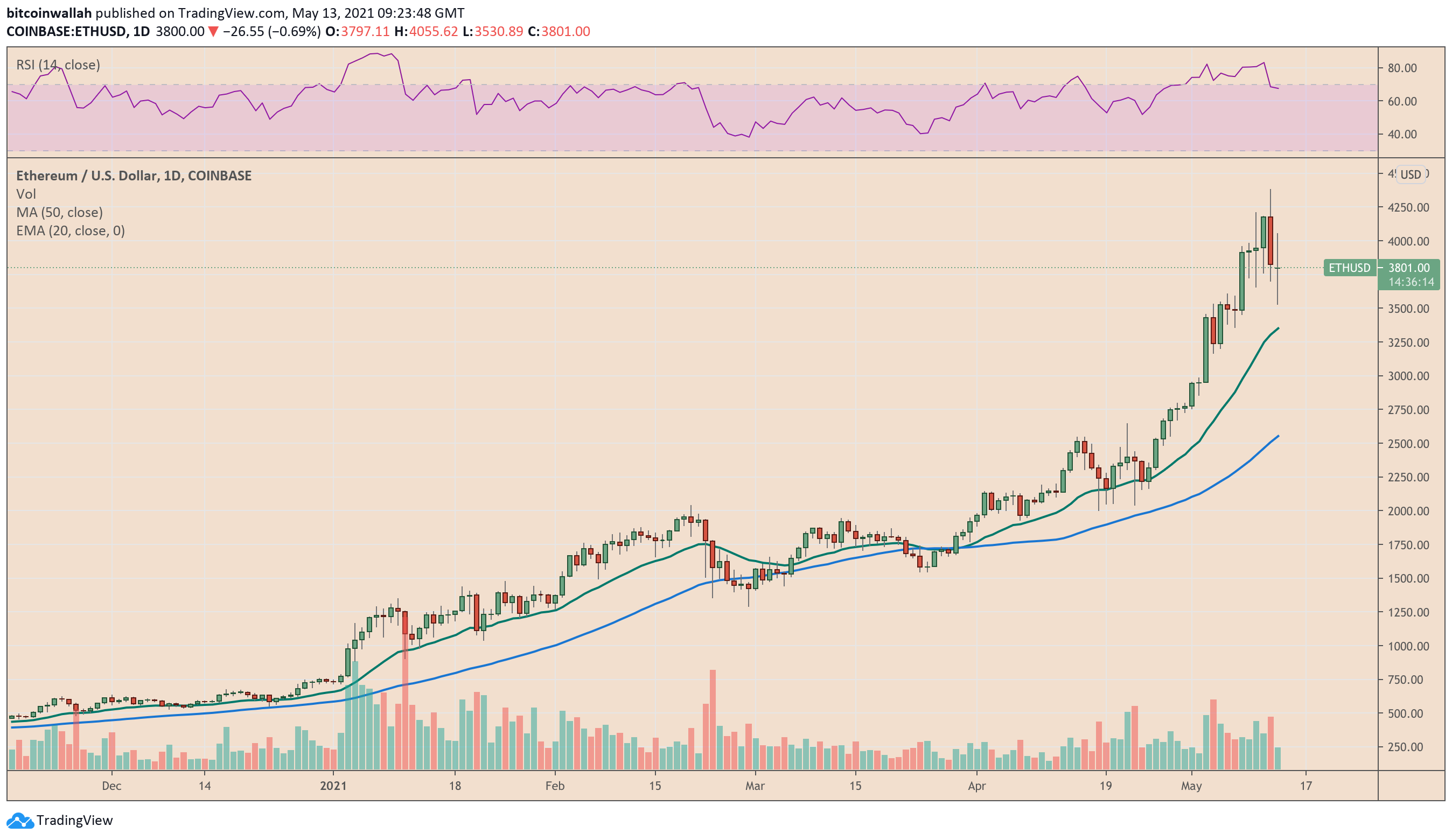 The biggest factors that keep contributing to Ethereum's rise as a blockchain project and as an investment asset include the rise of non-fungible tokens — digital assets that represent ownership of unique virtual items — and DeFi.

Meanwhile, the upcoming London upgrade in July, which proposes to transit the Ethereum blockchain from energy-intensive proof-of-work to a speedier proof-of-stake, promises lower transaction fees and scalability. Bulls expect it would onboard more crypto projects and should raise demand for ETH tokens.

ETH/USD maintains its 7-day profitability — now up 11% — unlike other altcoins. Aave and Alpha Finance are also up 25% and 13% on a seven-day adjusted timeframe.