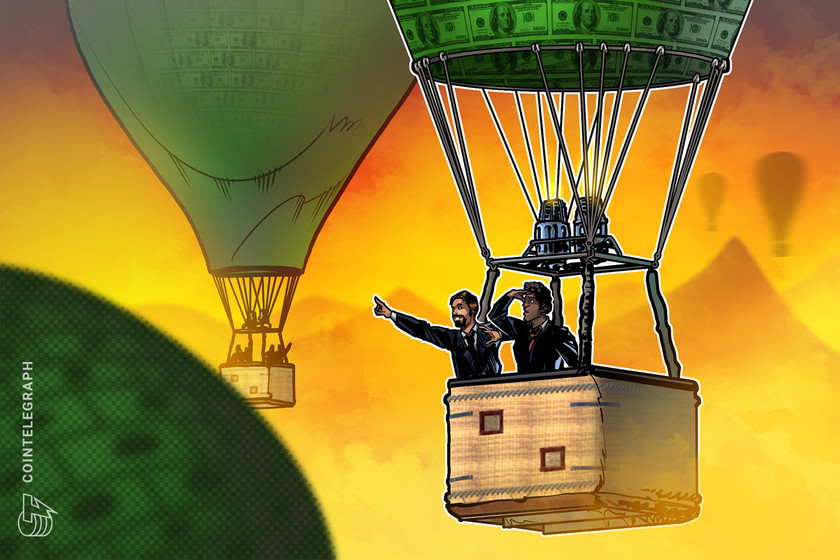 FTM price recovers from its May 12 low after the launch of the fUSD stablecoin and the possible return of Andre Cronje.

After a strong 2,000% rally in early 2021, Fantom (FTM) price collapsed alongside multiple altcoins and even though the blockchain has an impressive capability, it has yet to find mass adoption due to the lack of a compelling use case. FTM price hit an all-time high at $3.46, only to collapse to its pre-bull market lows under $0.25 after the failure of the Solidly DeFi project and the departure of developer Andre Cronje. 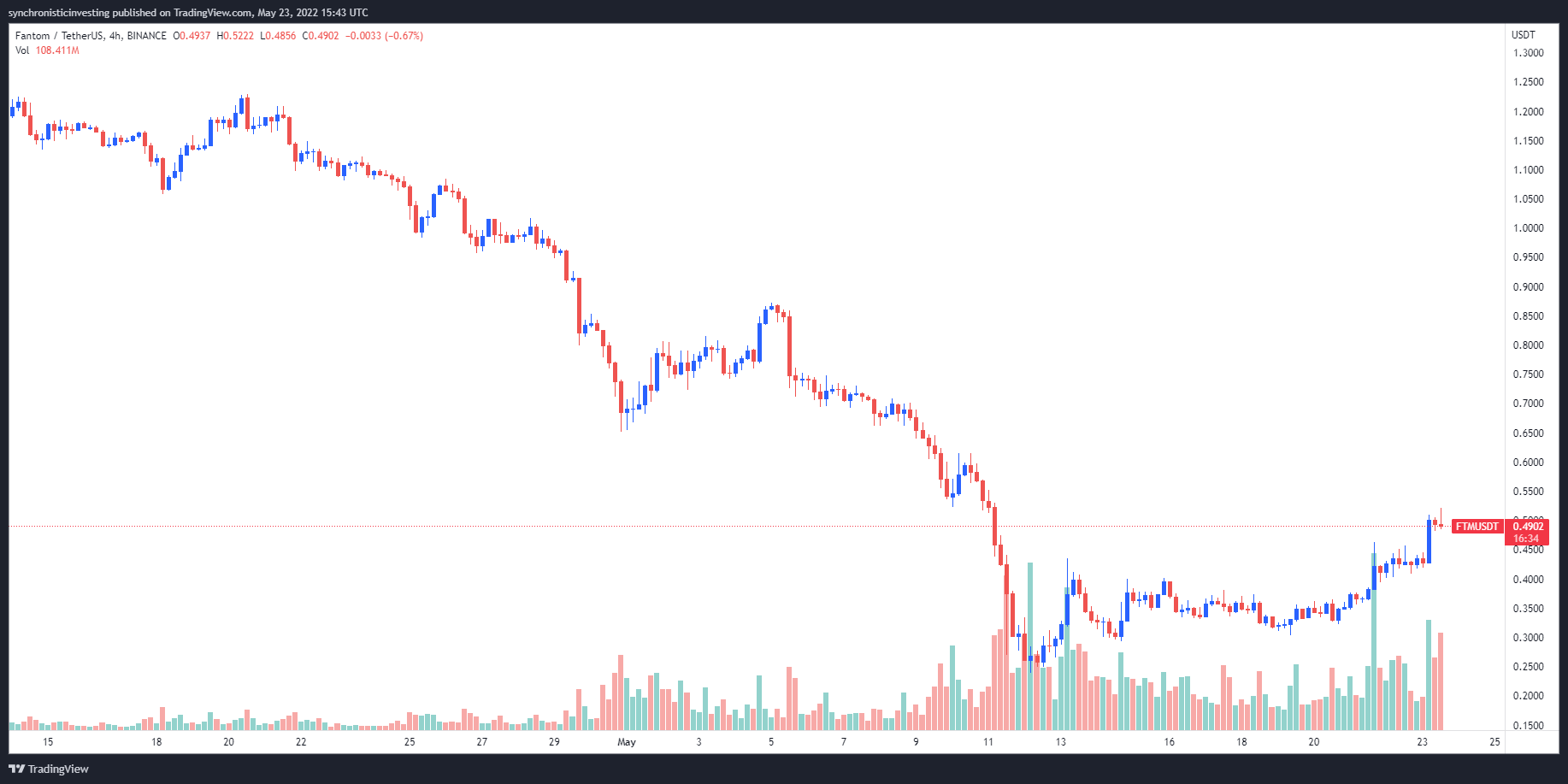 Three reasons for the uptrend in FTM price are the launch of the first native stablecoin on the Fantom network, new protocol upgrades and partnership announcements, which bring new functionality to the network, and speculation that Andre Cronje is working with decentralized finance (DeFi) protocols on Fantom.

The most notable development to occur in the Fantom ecosystem in the past few weeks was the release of fUSD, the first native stablecoin on the network. 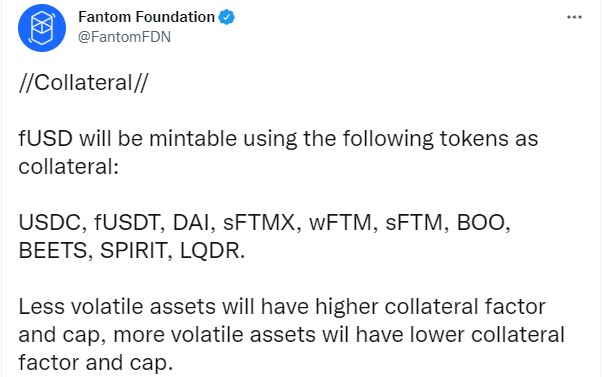 The launch of fUSD comes on the heels of the collapse of TerraUSD and looks to capture some of the capital flight from algorithmic stablecoin by offering an over-collateralized alternative.

On May 20, the Fantom Foundation released an update outlining the maximum collateral factor and minting cap for each supported form of collateral. The foundation also set the fUSD staking reward at 11.3%

The update also included details on Fantom liquid staking, setting a global cap of 150 million staked Fantom (sFTM), removing validators for the list of those eligible to mint sFTM and setting a loan-to-value (LTV) ratio of FTM at 90% for the purposes of minting sFTM.

A handful of recent protocol updates and new partnerships have also helped to bring a boost in momentum to Fantom, including the launch of Snapsync, which allows new nodes to quickly join the network.

With the integration of Snapsync, the time it takes for new nodes to synch could be reduced from 24 to seven hours, helping to enhance network reliability, improve scalability and create a greater degree of decentralization.

Fantom also partnered with Unmarshal and XP.Network. Unmarshal is a Web3 infrastructure provider that will integrate its indexing services with the Fantom protocol to give developers easy access to organized and granular on-chain data.

Related: Crypto remittances must have allure of cash without regulatory constraints — Jeremy Allaire

Another factor, albeit speculative, bringing a boost FTM price is speculation that well-known DeFi developer Andre Cronje could be contributing toward DeFi development on the Fantom network.

Amid rumors about the return of lead DeFi developer Andre Cronje, the price of the native FTM token has risen by almost 40%. Cronje proposed a number of measures aimed at stabilizing the situation and increasing the sustainability of the Fantom ecosystem as a whole.

The speculation started when Cronje submitted an fUSD optimization proposal that designed to solve a major depegging issue with the stablecoin on May 20 . A Fantom wallet that is believed to belong to Cronje has also added more than 100 million FTM over the past two weeks.

VORTECS™ data from Cointelegraph Markets Pro began to detect a bullish outlook for FTM on May 20, prior to the recent price rise. 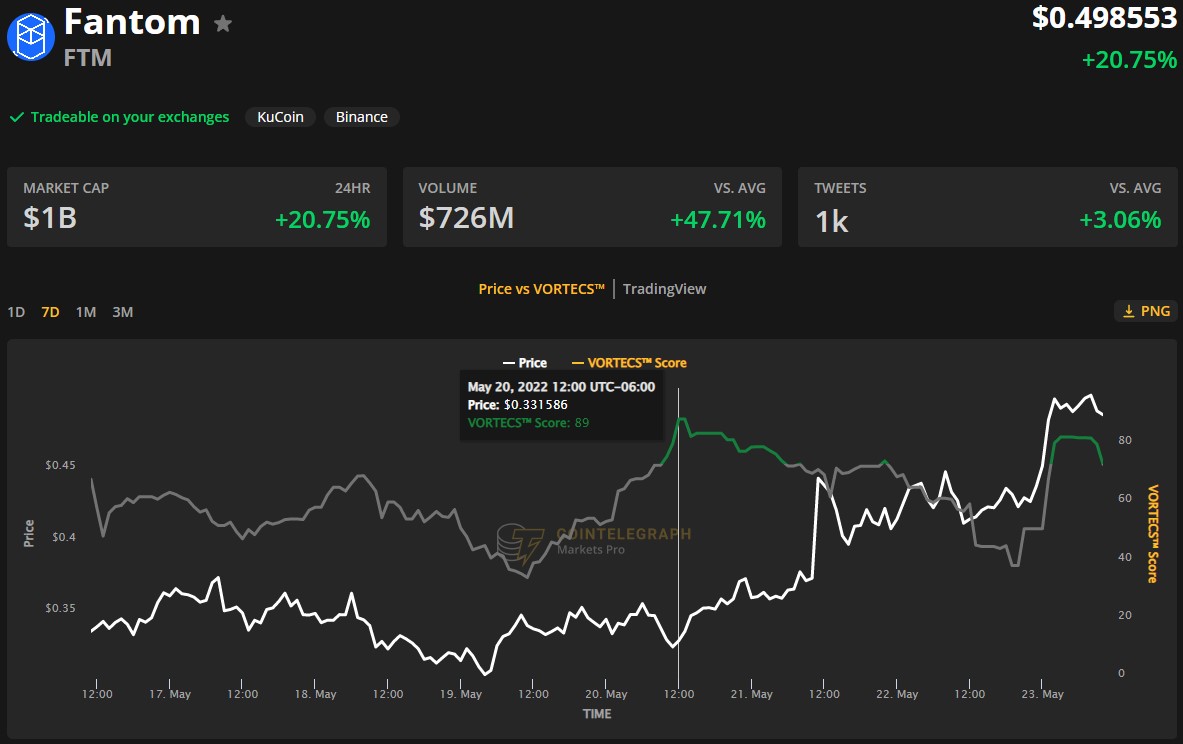 As seen in the chart above, the VORTECS™ Score for FTM spiked to a high of 89 on May 20 at the same time as its price began to increase 62.3% over the next three days.

STEPN’s GMT records a 35% surge thanks to existing users’ commitment, but that’s not all