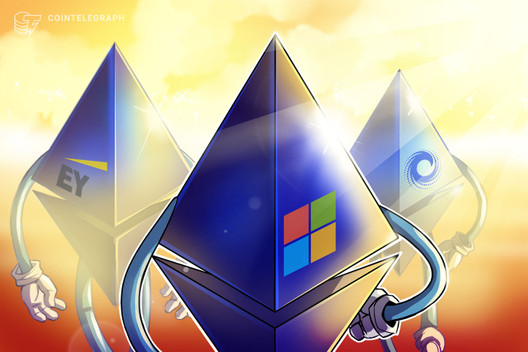 Microsoft, ConsySys and EY have launched Baseline, an open-source smart contract and tokenization protocol for enterprises on the Ethereum Mainnet.

Global taxation and transaction advisory firm EY have announced the launch of their open-source Baseline protocol.

Baseline comprises a smart contract and tokenization platform built for enterprises on top of the Ethereum blockchain. Baseline was founded by EY in partnership with Microsoft and ConsenSys, and was developed in collaboration with many companies operating in the cryptocurrency sector, including Chainlink, MakerDAO, Unibright and AMD.

The platform’s code has been made available to select entities by invitation and will see a public release before April.

In a video published by development partner Unibright, the platform is described as an “open-source protocol for secure and private business processes via public Ethereum Mainnet.”

The protocol will support tokenization and decentralized financial services on its mainnet. Baseline integrates zero-knowledge proofs, off-chain storage and distributed identity to prevent corporate data, assets, or activities from being compromised.

The platform will tokenize business outputs such as purchase orders and receivables, and facilitates “blockchain applications that link supply chain traceability with commerce and financial services.” Baseline supports industry-wide tokenization standards and is intended to move enterprise activity from permissioned distributed ledgers to a public blockchain network.

Legacy systems can use Baseline without modification

Baseline hopes to target firms offering customer relationship management and enterprise resource planning services, noting that the protocol can be used “without requiring any modification to legacy systems.”

John Wolpert, ConsenSys’ group executive for enterprise mainnet, stated that the project's vision is to "leverage the public Ethereum network without putting any enterprise data at risk,” adding:

“A lot of people think of blockchains as the place to record transactions. But what if we thought of the Mainnet as middleware? This approach takes advantage of what the Mainnet is good at while avoiding what it’s not good at.”

“Over the last two years, EY has been advancing the state of the art for private, secure transactions on public blockchains. This initiative builds on that groundwork and starts filling in gaps such as enterprise directories and private business logic so enterprises will be able to run end-to-end processes like procurement with strong privacy."

On March 3, Walmart was announced among eight new members of the open-source blockchain consortium Hyperledger. The announcement was made at the Hyperledger Global Forum 2020.