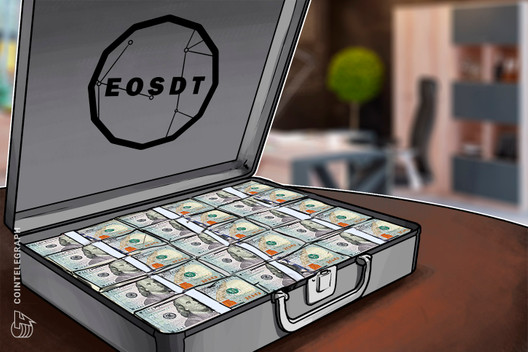 As the decentralized finance, or DeFi, industry continues to grow, the need for liquidity in cryptocurrencies is steadily increasing.

DeFi startup Equilibrium has today expanded the supply of its decentralized EOS stablecoin, EOSDT, as a result of integrating Bitcoin (BTC)-powered liquidity.

Equilibrium, a major multi-chain DeFi framework, has raised the EOSDT circulation cap from $70 million to $170 million, the firm announced on May 1.

Bitcoin is the biggest cryptocurrency by market capitalization. It is one of the most liquid crypto assets with a trading volume of over $52 billion as of press time. By integrating pBTC — an Ethereum and EOS-compatible token pegged 1:1 to Bitcoin — Equilibrium unlocks massive new liquidity for the EOS ecosystem while driving interest in BTC-based DeFi.

“Liquidity is one of the first challenges that a DeFi framework must overcome, so Bitcoin compatibility is a major achievement for securing Equilibrium’s future. This integration makes it possible for billions of dollars in fresh liquidity to make its way to EOS-based decentralized finance.”

Thomas Bertani, founder of the development team behind pTokens, Provable Things, emphasized that the integration unites the world’s reserve currency, the United States dollar, with the biggest cryptocurrency, Bitcoin:

“With Bitcoin now providing additional collateral for EOSDT, we unite the world’s traditional reserve currency, the U.S. dollar, with the most used and popularised digital asset to date. This marriage between fiat and digital currencies creates layers of liquidity and a unique collateral base that traditional currencies simply cannot provide.”

Equilibrium says that EOSDT smart contracts hold more than $10 million EOS collateral. This is claimed to be the biggest amount among all EOS-based decentralized applications so far. The annual percentage rate of EOSDT-driven liquidity against collateral of volatile crypto assets accounts for 1%, Melikhov told Cointelegraph.

The news comes amid the upcoming pBTC listing on major crypto exchange, Bitfinex. As reported, the listing will take place in May 2020.