Depending on this metric, Bitcoin may be due for a correction!

With Bitcoin and most of the market’s altcoins rallying in the backdrop, the Stablecoin Ratio seems to be highlighting the rise of sell-side pressure. At the time of writing, Bitcoin was trading at $18,649, with the asset successfully staying above $18,000 for over 24 hours now. In fact, the reserves on spot exchanges are dropping too and the trade volume on exchanges has risen considerably. With the market cap climbing from $339 billion to $354 billion almost overnight, stablecoins have had a key role to play in the price rally.

In October 2020, when the focus was on DeFi projects and their high incentive structure, stablecoins were quietly adding $100 million a day in market capitalization. However, as is often the case, this went largely unnoticed by mainstream media.

The value of the Stablecoin Ratio depends largely on Bitcoin and stablecoin reserves and since both values have dropped significantly, there is a whole lot of sell-side pressure. In fact, according to a recent tweet by @cryptoquant_com, the Stablecoin Ratio chart actually presents a buying opportunity for retail and institutions. 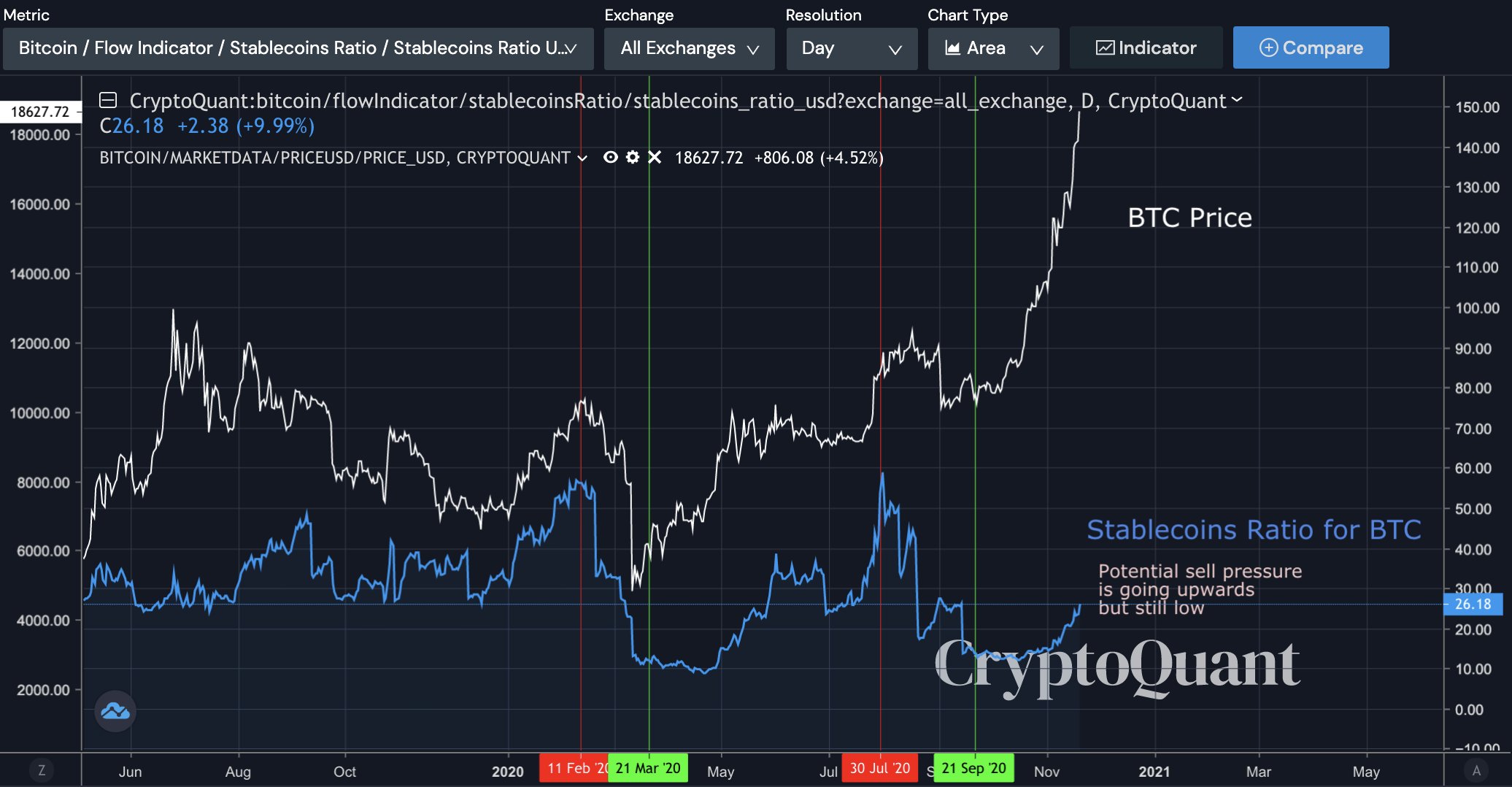 If the ratio were to recover and rise on the charts, it would signal a due correction in Bitcoin’s price. It should be noted here that this ratio is a useful indicator since it takes into account Tether and the market’s top stablecoins’ market cap.

In fact, Tether was recently ranked 3rd on CoinMarketCap’s charts after exceeding XRP’s market cap. Stablecoin dominance is up to 4.58% too, with the same supporting the current Bitcoin and altcoin rallies. And while new demand being generated on exchanges as a result of Bitcoin’s price rally is met by Stablecoin Supply, for the most part, Bitcoin remains a better investment than stablecoins.

Transferring funds in stablecoins or gaining the right of passage to the market through stablecoins is not the problem. The problem is that the fiat currency underlying such stablecoins – the USD – is losing value over time due to inflation, increasing money supply, and negative interest rates.

The aforementioned factors are likely to dissolve the value of the fiat currency and in turn, the value of the stablecoin too, over time. It is highly unlikely that it will gain value and HODLing crypto-assets and gains in stablecoins like Tether may lead to devaluation over time. Ergo, HODLing may not be the best strategy for stablecoins.

However, climbing stablecoin reserves do highlight rising demand and inflows of capital, both aspects that demand an increase in sell-side pressure. Simply put, depending on the Stablecoin Ratio, Bitcoin may just be due for a correction soon.