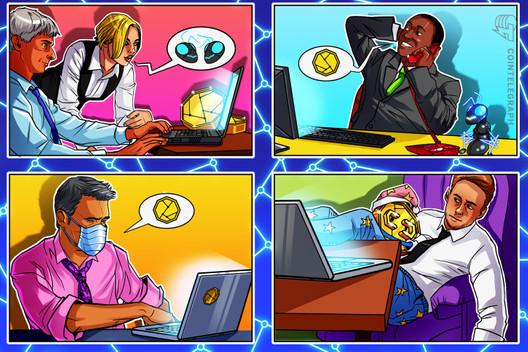 With many now working remotely, blockchain conferences have also been either postponed, canceled or moved online to avoid the coronavirus.

The number of coronavirus cases worldwide is rapidly getting close to 400,000, with many industries and businesses affected around the world. The crypto market has been no exception. Bitcoin’s (BTC) price initially reacted with a 50% drop; blockchain companies began to suggest that their employees working remotely; and crypto conferences have been either canceled or postponed.

While some conferences report poor attendance and mass dropouts from panelists, others have found success in a virtual format. Crypto conference organizers and speakers shared with Cointelegraph the latest insights on what is happening right now within the blockchain events industry.

How did it all begin?

It all started back in February when organizers of major crypto conferences moved to cancel events in Asia in an attempt to combat the spread of the coronavirus. Among them were Hong Kong Blockchain Week 2020, Japan’s TEAMZ Blockchain Summit and Token2049 that were rescheduled for September and October.

Two other major events — the Binance Blockchain Week Vietnam and TRON’s native summit — were canceled with new dates yet to be announced. Both organizers have already offered the participants a full refund or free VIP tickets.

Many participants supported the organizer’s decision. Among them is Emre Tekisalp, the director of business development of O(1) Labs, the team behind Coda Protocol, who was invited to speak at the Istanbul Blockchain Week. He told Cointelegraph:

“Most conferences have wisely placed the safety and health of participants above their own economic concerns.”

In the United States, which has the third-highest number of people infected by COVID-19, organizers of crypto conferences have also had to change their plans. In particular, Bitcoin 2020, which was supposed to be held in San Francisco in March, has been rescheduled for the third quarter of 2020, and the DC Blockchain Summit has been canceled altogether, with new dates yet to be announced.

Australia is also on the list. Adrian Przelozny, the CEO of crypto exchange Independent Reserve, shared with Cointelegraph that the APAC Blockchain Conference, which was initially scheduled for April 28–30, has been rescheduled for later dates.

In general, the community reacted to the cancellation of conferences with understanding, albeit actively, as the users’ comments on the official Twitter page of the British Crypto Festival suggest.

Overall, most blockchain- and cryptocurrency-related activities have been postponed to the second half of the year due to the current precarious situation around the world. Antonio Milio, the CEO and co-founder of Bitwings, a blockchain-based solution of the leading Spanish mobile operator Wings Mobile, told Cointelegraph that most crypto conferences have been postponed until the fall:

“Over the past two weeks, about 10 conferences that I planned to visit have been canceled. Some of them were postponed to September–October, but there is no idea yet when the panic due to coronavirus will disappear.”

On March 15, Cointelegraph reported on the first coronavirus cases among the participants of the Ethereum Community Conference, which took place in Paris from March 3 to 5.

To date 18 people have been diagnosed with the disease, including Afri Schoedon, the former lead manager of Parity; Jacques Dafflon, author of the ERC-777 token standard; Marco Correia from Gnosis; and Yong Zhen Yu, the co-founder of Torus, a decentralized authentication service. The latter wrote in a Twitter post that he also attended the ETHLondonUK conference, which, in turn, can potentially mean more attendees could be infected.

All the participants of this event — over 600 people, including Vitalik Buterin, Vlad Zamfir and Joe Lubin — were also asked to take a coronavirus test.

Against the background of disturbing reports, the organizers of one of the largest events in the crypto industry — Consensus 2020 — have decided to make the event virtual instead of canceling it. The online conference will be held in May, allowing attendees from all over the world to join for free. Additionally, the organizers have promised to give a refund to those who don’t want to participate online.

Many participants have chosen to keep their tickets, though. For example, Eric Pitt, director of marketing for DigitalMint, a Bitcoin point-of-sale provider, told Cointelegraph that his team will take part in the virtual conference:

“We're delighted to see that the conference will be adapted to a completely virtual format, rather than canceling the event. During a time when all industry gatherings are canceled, being able to participate in Consensus means a lot.”

Another Consensus speaker, Will Reeves, has also confirmed his online participation to Cointelegraph:

“I’m going to be a speaker at Consensus 2020, which has been re-formatted as a virtual event. In my view, it’s better for conferences to go virtual than to cancel or delay indefinitely.”

After the EthCC 3 conference, some participants were diagnosed with COVID-19, while another event in Paris, Blockchain Week Summit, was postponed to December. Christophe Ozcan, one of the organizers of the Paris Blockchain Summit, which is scheduled for July 10, told Cointelegraph that his team is now considering switching to a virtual conference as well:

“We have already scheduled the 3rd Paris Blockchain Summit on 10th July of 2020. At the moment, we are waiting to see how the coronavirus pandemic virus will be cured around the world and how the current situation is evolving. We are analyzing few other possibilities like making a virtual summit in case that the current situation still not evolve.”

However, demand for such a format remains low, according to Ozcan, since the expectations are unknown for sponsors and attendees, adding: “It is slowly gaining momentum. If the pandemic is not contained early enough, we will likely see an increased interest in virtual crypto conferences.”

Przelozny told Cointelegraph that despite many people liking the virtual format, the main attraction of attending conferences is to meet the delegates and speakers, which would no longer be an option: “It's not often that you have a possibility to meet so many of APAC's leaders in blockchain under the one roof.”

Still, there are opposite points of view regarding the demand for the online format. Pradeep Atmaram, public relations officer at Persistence, the enterprise hub of Cosmos, believes that the demand for virtual events is growing significantly due to lower costs and higher limits on the number of participants.

The project’s meetup, called Cosmos India, was scheduled for March 15 but, because of coronavirus fears, had to be moved online. According to Atmaram, Cosmos India managed to host over 60 participants and 10 speakers from across the globe instead of the initially confirmed 30 members and three speakers.

Hsin-Ju Chuang, founder of Dystopia Labs, told Cointelegraph that the Trust-Less 2020: Proof of Stake Validator Summit, which was organized by her in February, was “a huge success.” She also explained that the online format may be a good option, given that many in real life conferences have lost their true value:

“IMO, most IRL crypto conferences last year were poorly run; it was basically the same people traveling the world together; people were not going to IRL conferences to attend sessions and learn (they were flying out to network / do meetings).”

Barbara Calderazzo, a representative of the communication team of blockchain project Interlogica, told Cointelegraph that the project managed to quickly respond to the coronavirus outbreak in Italy and moved its Bitcoin Venezia Meetup online.

“Our Virtual Bitcoin Meetup is a live event, in many ways similar to the physical one. We first ‘aired’ on March 11 with a huge success: 200 people during the livestreaming is an unexpected result. [...] The attendants were very reactive and they asked several questions (through chat or ‘in person’) during the evening.”

Additionally, blockchain companies are increasingly opting for online events amid intensifying coronavirus concerns. For example, Nodl, the project that develops the Lightning Network, initially planned to hold its own event during Bitcoin 2020 but is now considering the possibility of moving it online. The company has already conducted a survey among its users where 65% supported the initiative. Bitcoin Cash has also joined the list of projects moving its regular meetups online.

Related: Stuck in Quarantine? Become a Blockchain Expert With These Online Courses

Nevertheless, some feel reluctant to alter their plans, especially when it comes to other regions less affected by the pandemic. Among the examples is the Blockchain Africa Conference, which was held on March 11 and 12.

However, some speakers opted-out of participating due to quarantine recommendations. Charles Hoskinson, CEO of IOHK, the company behind Cardano, told Cointelegraph that he decided to cancel his speech at the aforementioned Blockchain Africa Conference. He, instead, recorded a video of his presentation, which was subsequently shown at the conference.

How will this affect the market?

The coronavirus pandemic has already affected the price of cryptocurrencies in general and the activities of blockchain companies in particular. In March, Canaan, the leading manufacturer of mining equipment, left the Chinese market, while Coinbase, Waves, Binance and other large companies offered their employees the option to work remotely.

A lot of project launches that were planned for this year will also be significantly impacted, according to Atmaram from Persistence, the enterprise hub of Cosmos, whose protocol launch in 2020 has been affected by the pandemic. He told Cointelegraph:

“Coronavirus will pose difficulties for the community as a whole, and this might affect the timeline of the projects. Globally, this year crypto and blockchain adoption was predicted to boost. With this pandemic, progress has slowed down.”

A lot of conferences that were planned around significant events, like the upcoming Bitcoin halving, have either been suspended or canceled. Consequently, this will impact the new wave of users coming into the ecosystem, as predicted by Atmaram.

The cancellation of crypto conferences will, in turn, entail financial losses for the organizers and sponsors, according to Michael Garbade, the co-founder and CEO of Education Ecosystem, a decentralized learning ecosystem:

“Remember, they [organizers] hired and paid employees for a job that wasn’t completed. It’s either they have to refund the participants’ money or postpone to a later date. [...] The cancellations affect the marketing efforts of the participants. They attend these conferences to market their products or services, but they can’t due to the ongoing coronavirus pandemic.”

However, there are organizers who believe in finding a new approach amid the coronavirus outbreak and that it may bring even more benefits to their businesses. Sergey Voskolovich, part owner of DAO.Digital investors club, told Cointelegraph that although he made the Global Investors Virtual Summit free for everyone, the company won’t suffer financial losses:

“We only take money for advanced options and participation in the investors' club. For those who want to present their project to investors to attract investment, the cost of participation has turned from $2,500 to $ 0. [...] In doing so, we will not suffer any losses. Because our summit will be several times more massive. And our losses will be more than compensated by advertising revenue.”

In general, according to Evan Luthra, a Top 30 Under 30 tech entrepreneur and blockchain expert, what is happening in the world is providing new opportunities for participants in the crypto industry. In particular, he began releasing more online podcasts to talk to audiences. He told Cointelegraph:

“Doing online events also makes it very easy for instant sharing with friends and is a great way to reach out to people who are working from home and usually wouldn’t have time to attend a conference. I do realize this affects a lot of stakeholders in a negative way, but we need to come together to help stop the spread of this dangerous virus which is already a pandemic and growing very fast.”

The Crypto Industry’s ‘Bloody Friday’ Lawsuits: Do They Hold Weight?