Fresh gains come as the weekend preserves previous performance and Bitcoin heads to $59,000 on Monday.

Bitcoin (BTC) is challenging familiar but significant all-time highs as a new week gets underway, rallying to $58,000 on May 3.

After a surprise rally on Friday, the largest cryptocurrency saw a slow comedown through much of the weekend. This turned on its head overnight on Sunday, however, and now BTC/USD is back fighting resistance near $60,000.

Cointelegraph takes a look at what the coming days might have in store for Bitcoin price action with five factors that could help shape it.

With various major markets closed for May holidays, there are fewer cues than usual coming from commodities and equities.

Unlike Bitcoin, markets did not react well to rumors that fiscal support measures over the virus may be reduced by some banks — these were a key element behind the S&P’s record performance over the past year.

In tandem with the move was a shift in the strength of the dollar, however, with the U.S. dollar currency index (DXY) seeing impressive gains after a month of descent. 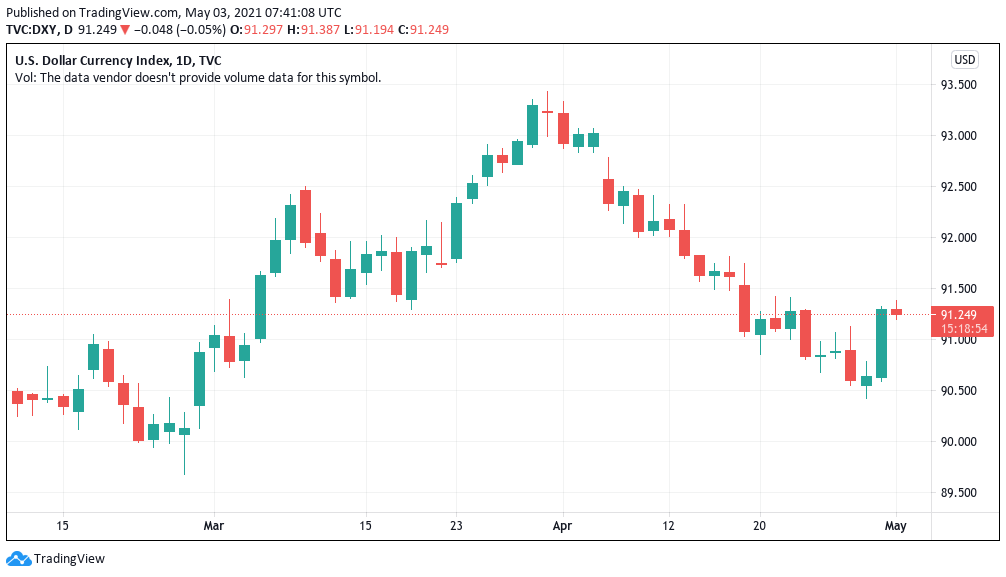 As Cointelegraph reported, DXY and Bitcoin tend to be inversely correlated, but last Friday proved to be another notable exception. BTC/USD climbed conspicuously as if out of nowhere on the day, passing $58,300 before reversing.

A key topic remains inflation — senior U.S. officials believe that trillions of dollars in virus stimulus will have little impact on it, while others disagree.

Another day, another blistering comeback for Bitcoin.

Just a week after recovering from its dip to near $46,000, BTC price action is now making good on its further gains late last week.

While the weekend was mostly lackluster in tone, Monday is seeing the kind of “buying frenzy” that arch-nemesis Warren Buffett has been eyeing on traditional markets. 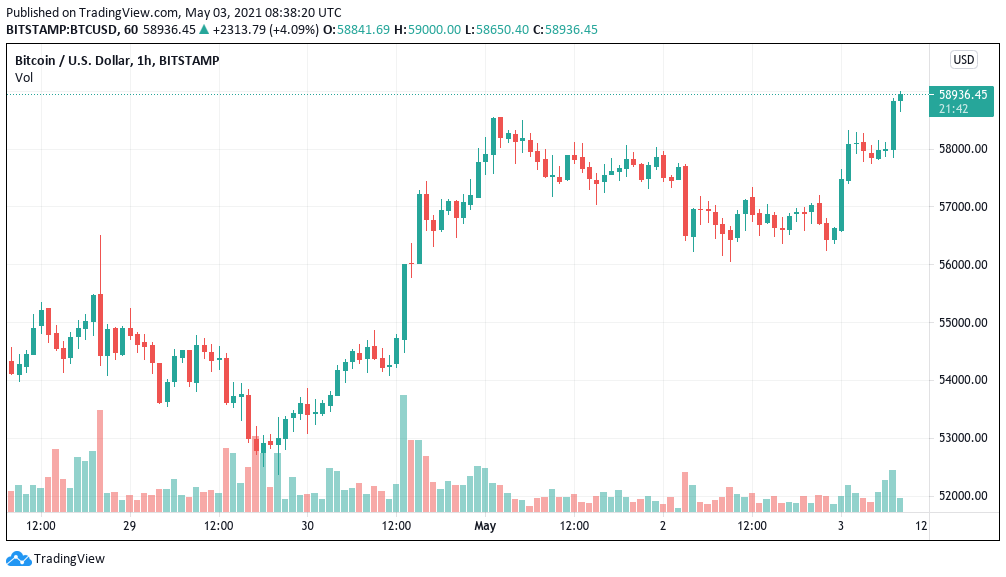 A look at buy and sell demand from the orderbook of major exchange Binance shows resistance is still strong at $60,000 and above, and bulls will need to knock down several walls of sell orders to break out beyond the current all-time high of $64,500. Another significant barrier is now $68,000. 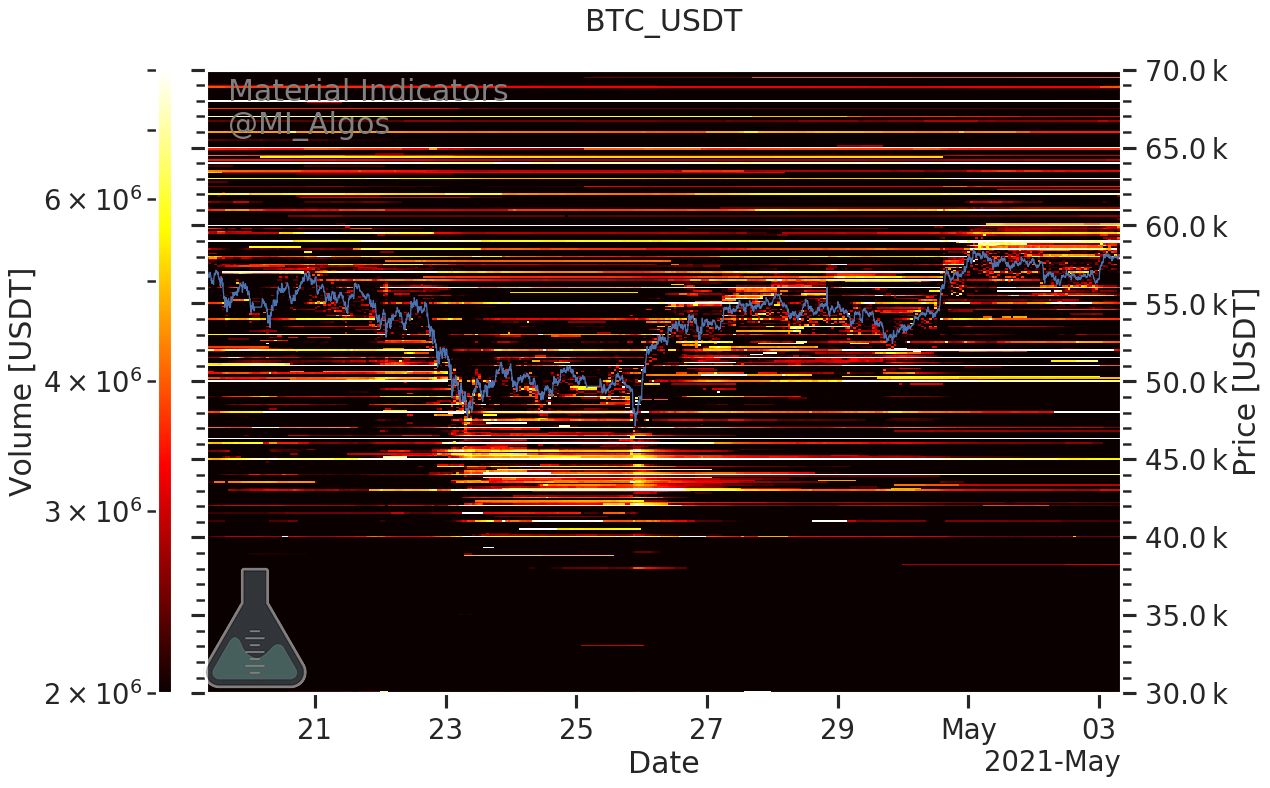 Nonetheless, appetite for Bitcoin could well be seeing a new bullish phase as stablecoin balances on exchanges fill up. Against huge “printing” of these assets, such a trend raises the prospects of significant buyer demand materialising, helping to boost spot price action.

“Stable coins are flowing back into exchanges. You know what that means,” analyst Jan Wuestenfeld summarized.

Cat and mouse with Ethereum

The performance has defied expectations — ETH/USD is now above $3,000, having gained 28% over the past week compared to Bitcoin’s 11%.

That predictably shaved even more clout off Bitcoin’s market cap dominance, this now at 47.7% — its lowest since July 2018.

“I wouldn't be surprised if we see $3500 $ETH this week,” popular Twitter trader Crypto Chase forecast, along with further upside against Bitcoin.

“ETHUSD breaking out from it's upward consolidative leg + ETHBTC still has room to run (currently 0.053, resistance at 0.058).”

“As $ETH price reaches over $3,000 setting a new ATH, the NVT Ratio is driven back down towards this cycles lows,” the firm commented on an accompanying chart. 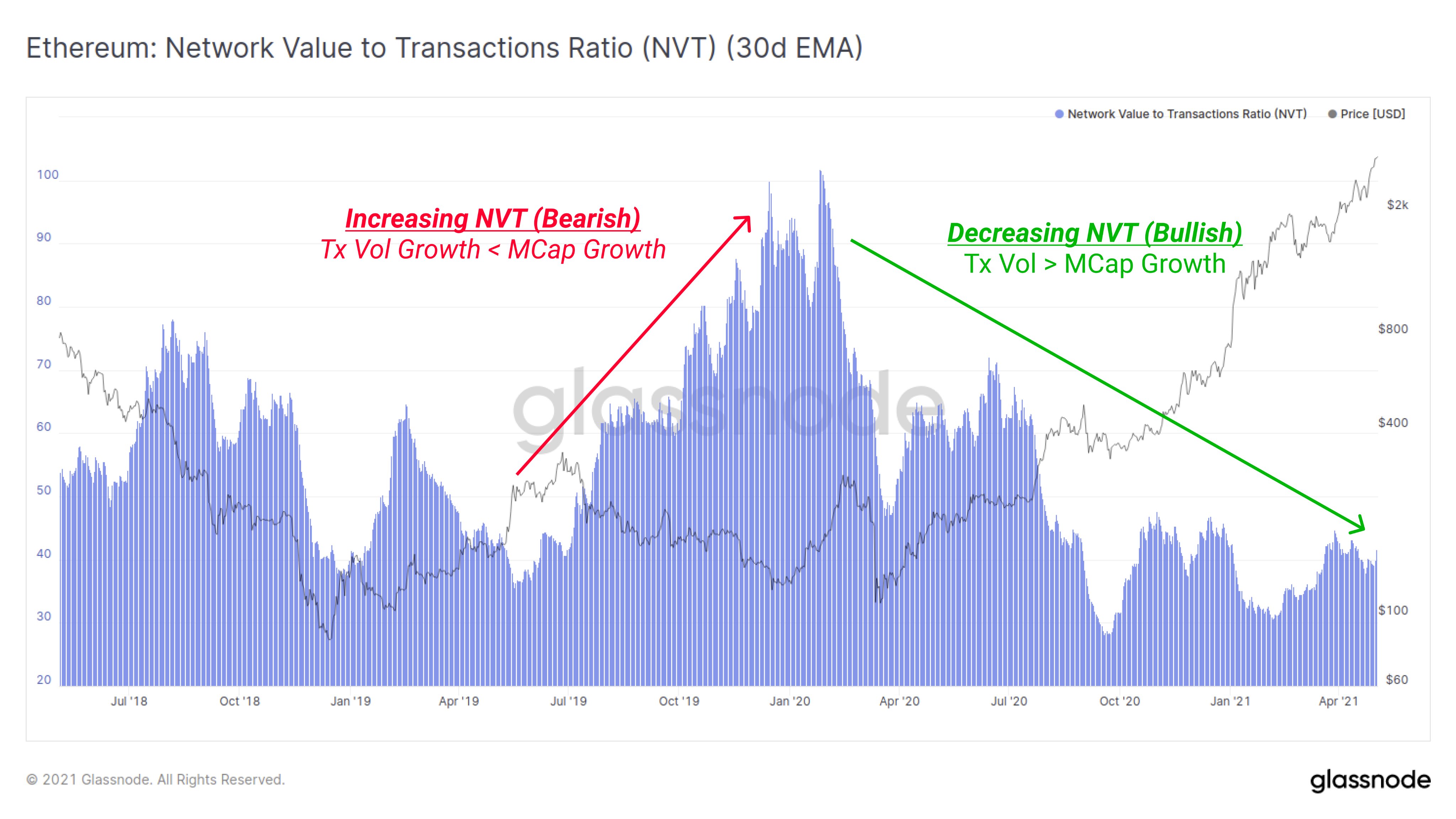 Back on Bitcoin, and it’s network fundamentals which are still playing catch-up after seeing something of a “reset” over the past few weeks.

This first came in the form of a brief hash rate plunge due to flooding in China. Bitcoin’s network difficulty then began signaling a drop to accommodate the loss of participants.

As difficulty adjusts every two weeks, it took until May 1 to kick in in real terms. The resulting 12% drop was the biggest since last November.

With that out of the way, however, the door is open for returning mining hash rate to up competition and return difficulty to positive, not negative, adjustments. It’s still early — current estimates still call for another drop, this time of around -7%.

Hash rate, meanwhile, has all but recovered from its prior shock, standing at around 161 exahashes per second (EH/s). Its peak, monitoring resource MiningPoolStats says, was 168 EH/s.

Greed is back on the market

With new gains comes a familiar shift in sentiment, and market participants are getting greedy.

That’s according to the ever-popular Crypto Fear & Greed Index, which on Monday is back in “greed” territory after more than doubling since late last week.

The Index uses a basket of factors to create a normalized score between 0 and 100 for how greedy or fearful crypto markets broadly are on a given day.

Its score tends to highlight when a price floor is in, or conversely, when a sell-off is due. At 61/100, however, the Index still has room to grow before sounding a local top — “extreme greed” is not here yet.