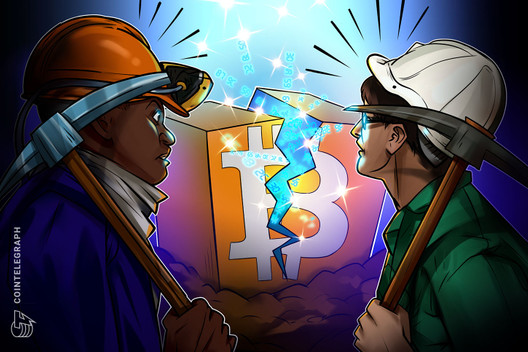 Decred's co-founder thinks Bitcoin's halving could double its price as miners look to cover the costs of their work.

"Since the Bitcoin halving means that miners will receive half as many Bitcoins for the same amount of work, this doubles the unforgeable costliness of creating Bitcoin," Yocom-Piatt told Cointelegraph in a May 1 email, adding:

"Miners’ costs are effectively fixed, so to maintain the same profit margins, they are incentivized to double the price at which they sell their Bitcoin. I expect this supply shock will drive the Bitcoin price up by moving offers from miners up substantially."

Approximately every four years, Bitcoin completes a halving event based on parameters built into its code. Each halving cuts Bitcoin's mining block reward in half.

Bitcoin has a maximum supply of 21 million coins, although not all those coins are in circulation yet. Since its inception over a decade ago, Bitcoin has seen its circulating supply grow consistently through mining rewards.

At current rates of roughly every 10 minutes, a miner somewhere in the world finds a block on Bitcoin's network, receiving a reward of 12.5 BTC. Essentially, this means 12.5 new Bitcoins hit the market every 10 minutes.

On May 11, that reward drops down to 6.25, paying miners less for the same amount of work.

Bitcoin's price could double in the coming days

Due to this fundamental market dynamic shift, Yocom-Piatt sees higher prices for Bitcoin. "In the short term, I expect the price to roughly double, but longer term predictions are difficult to make in the context of the boom-bust pattern of cryptocurrency markets," he said.

"The stock-to-flow ratio is increasing substantially as a result of the halving, so that is good for the longer term price of Bitcoin," Yocom-Piatt added.

Bitcoin's stock-to-flow model, a product of Twitter crypto analyst PlanB, compares Bitcoin's supply with its value, taking halvings into consideration. The analyst recently published an updated stock-to-flow chart for Bitcoin, including gold and silver in the mix.