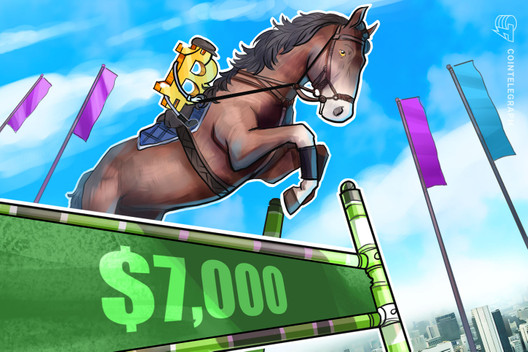 Bitcoin sees $7,150 for a fleeting moment before climbing down to the mid-$6,000s, but traditional markets remain in deep trouble.

Bitcoin (BTC) was gearing up to crack $7,000 on March 20 as the cryptocurrency’s miraculous turnaround produced almost 90% weekly gains.

Data from Coin360 and Cointelegraph Markets showed BTC/USD trading at around $6,600 on Friday, having risen by more than 20% in the preceding 24 hours alone.

Exchange spreads were wide — on Bitstamp, for example, an unusual one-minute candle briefly took Bitcoin to $7,140.

Bullish momentum intensified in the second half of the week, following fresh announcements of liquidity printing by central banks on a historically unprecedented scale.

As Cointelegraph reported, in-house analyst Keith Wareing predicted that BTC/USD would top out at around $7,200. For this, $6,400 should remain as support, he said.

The events place Bitcoin firmly at odds with stocks and the wider traditional market. In the United States, where markets failed to react to monetary stimulus promises, the Federal Reserve’s balance sheet hit record highs of $4.66 trillion.

Over the past week, the balance sheet increased by $356 billion, claiming the title of the largest such increase ever since 2008 — the height of the global financial crisis.

Analysts had increasingly argued that the coronavirus pandemic’s side effects had become worse than 2008, while Bitcoin appeared to weather its first global financial meltdown.

Other safe-haven assets, notably gold, were yet to stage a similar recovery on Friday. At press time, XAU/USD was still down 5.6% for the week, after a modest 3.4% rebound.