Bitcoin Price Below $8,000 Again — Will Bulls Buy the Dip This Time? Bitcoin price has dropped below $8K again but it appears the digital asset is gearing up to consolidate in the $8K to $8.2K range.

Bitcoin (BTC) price has taken another dip below $8,000, dropping 5.11% to $7,728 after touching a daily high at $8,149. The pullback occurred shortly after the New York State Governor Andrew Cuomo announced that a 1-mile containment area of New Rochelle, a suburb of New York City, would be quarantined for at least two weeks.

Cuomo also deployed the US National Guard to the area and all schools and public facilities will remain closed as the National Guard will assist with distributing food to those quarantined in their homes. Cuomo described the situation as a “matter of life and death.”

Traditional markets opened robustly before also dropping 4 to 5% but at the time of publishing both the S&P 500 and DOW are posting minimal 0.95% and 0.70% gains.

Despite the presence of an inverse head and shoulders pattern on the hourly time frame, many Bitcoin traders anticipated that the price would reject at the $8,200 resistance, as evidenced by the high volume node on the volume profile visible range.

Generally, it seems investors remain wary of jumping back into the market given the severity of the recent correction and it now seems that former key supports will now act as formidable levels of resistance.

At the moment, Bitcoin needs to reclaim the $8,000 to $8,150 range before traders waiting along the sidelines show interest in the digital asset, although there are bound to be a number who opened long positions on yesterday’s drop to $7,629. 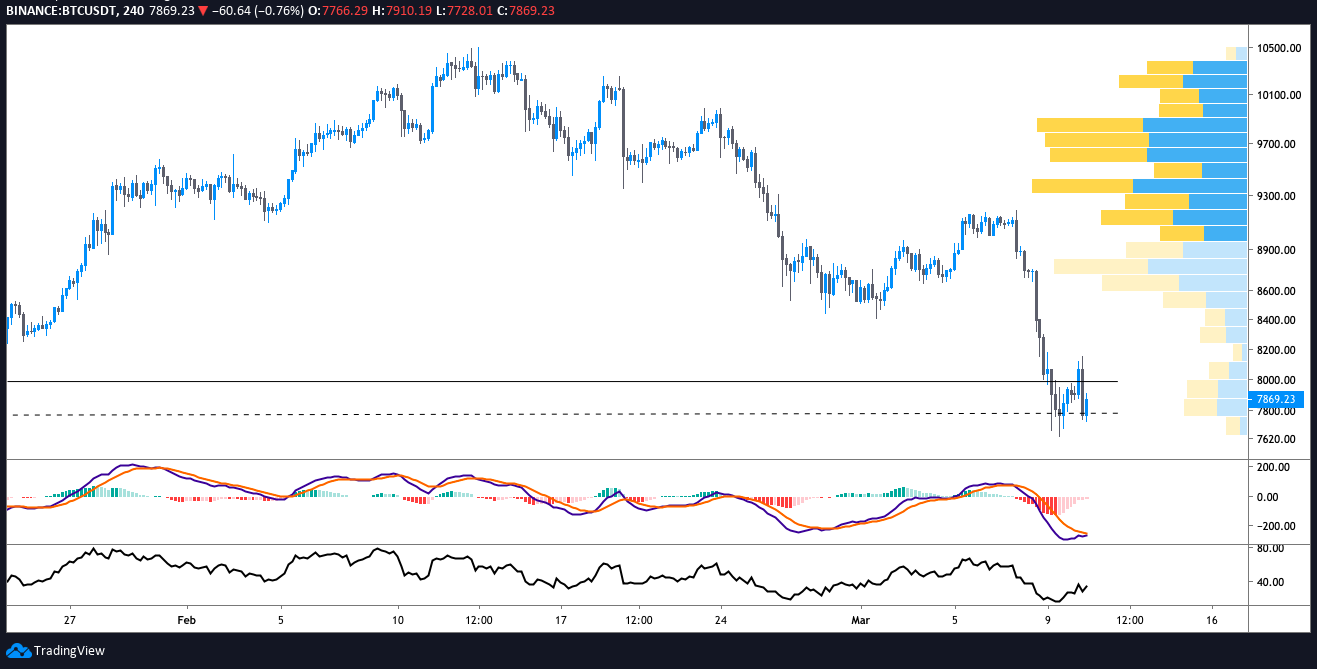 The 4-hour timeframe shows bulls buying at the $7,735 support and the moving average convergence divergence shows the MACD attempting to cross above the signal line and the histogram bars have shortened, drawing closer to 0.

On March 1 Cointelegraph contributor Scott Melker tweet the above chart and explained that:

“If price makes it to this red circle, I am buying everything not nailed down. I have been discussing this area in the Wolf Den for weeks. This would be a retest of that major descending resistance as support and a golden pocket retrace - or even a 70.5 OTE.”

Melker revisited the thread today, updating the chart commenting that:

“I said that I would buy heavily here and my bids filled overnight. This was the entry I have been discussing for weeks - a golden pocket retrace, 70.5% OTE, and retest of the weekly descending channel. Going to set the stop tight and let it play out.”