Bitcoin price action turns volatile once more as daily gains circle 4% despite bad news from traditional markets, which are tipped to open lower.

Bitcoin (BTC) returned to $9,000 just hours before the halving on May 11, stepping up efforts to erase the weekend’s big losses.

Data from Cointelegraph Markets and CoinMarketCap showed BTC/USD attempting to establish $9,000 as support on Monday, as traditional markets prepared to also open lower.

At press time, price movements were still rocky, with halving excitement contrasting with selling pressure on the Dow Jones, S&P 500 and elsewhere. 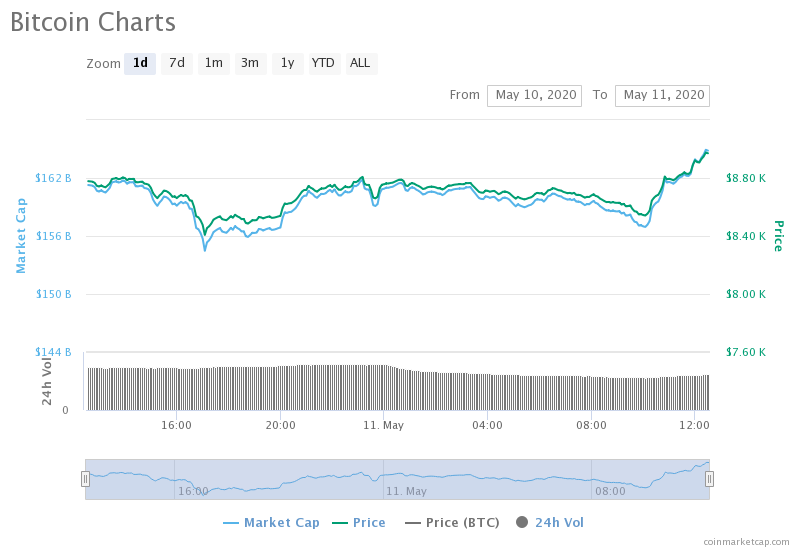 Attention also focused on a CNBC interview from macro investor Paul Tudor Jones, who last week revealed that he had purchased Bitcoin. Public praise from Jones could potentially spark an uptick in mainstream consumer purchasing.

Describing cash as a “wasting asset in your hand” due to inflation, he told the network that Bitcoin represented at least 1% of his total assets, and the figure could be closer to 2%.

“The dumping into a big bullish response is also what we have seen at previous bottoms,” Cointelegraph analyst filbfilb summarized to subscribers on Monday.

If the bulls can stay above $8,700 & the POC down here then things might be looking up sooner rather than later = loose that and make it resistance and then it’s bearish.

Earlier, Cointelegraph published four areas for traders to watch ahead of the halving, which could hit in a matter of hours.

The event has attracted considerably more attention than the previous halving in 2016, according to data from Google Trends, which suggests that search interest alone is 300% higher this year.