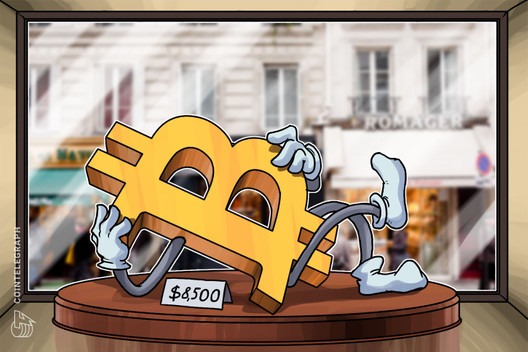 Coronavirus continues to ravage markets worldwide, but traders are eyeing the potential for Bitcoin to profit from the uncertainty.

Bitcoin (BTC) was trading higher on Mar. 2 after a lackluster weekend saw markets fall below $8,500 for the second time in a week.

Data from Coin360 and Cointelegraph Markets showed slightly more promising conditions for BTC/USD as Monday began, the pair trading at around $8,600.

Coronavirus continued to weigh on sentiment, with its spread around the world stalking traditional markets. As Cointelegraph reported, last week, the Dow Jones saw its biggest daily drop in history, while gold shed more in a day than on any other since 2013.

Even Nouriel Roubini, the economist known as “Dr. Doom” for, among other things, his highly negative stance on Bitcoin, expressed major concern.

In an interview with German news magazine Der Spiegel on Thursday, Roubini said the coronavirus crisis was “much more severe for China and the rest of the world than investors have expected.”

“Everyone believes it’s going to be a V-shaped recession, but people don’t know what they are talking about,” he added.

“They prefer to believe in miracles.”

China led a slight recovery in early trading on Monday, with its CSI 300 index jumping by 3.2% on hopes of a financial stimulus package for the ailing economy.

Bitcoin nonetheless managed to escape the lower weekly close which one analyst feared would force him to “rethink” its prospects.

For Cointelegraph Markets’ filbfilb, closing about $8,500 — the 20-week moving average for BTC/USD — was key.

“If we close the week below the 20 wma then I need to reassess btc. 8500+ required,” he told subscribers of his Telegram trading channel.

Responding to Roubini, meanwhile, fellow Cointelegraph analyst Keith Wareing noted that more turmoil for traditional markets could benefit Bitcoin if the latter were to retain its strength.

“Imagine for a moment, stocks drop by another 40% whilst #bitcoin starts to recover,” he tweeted on Sunday.

“How many new eyes will this put on #btc? If you just lost a fortune in stocks, cramming funds into a low market cap investment like #bitcoin could be the fastest way to recover.”